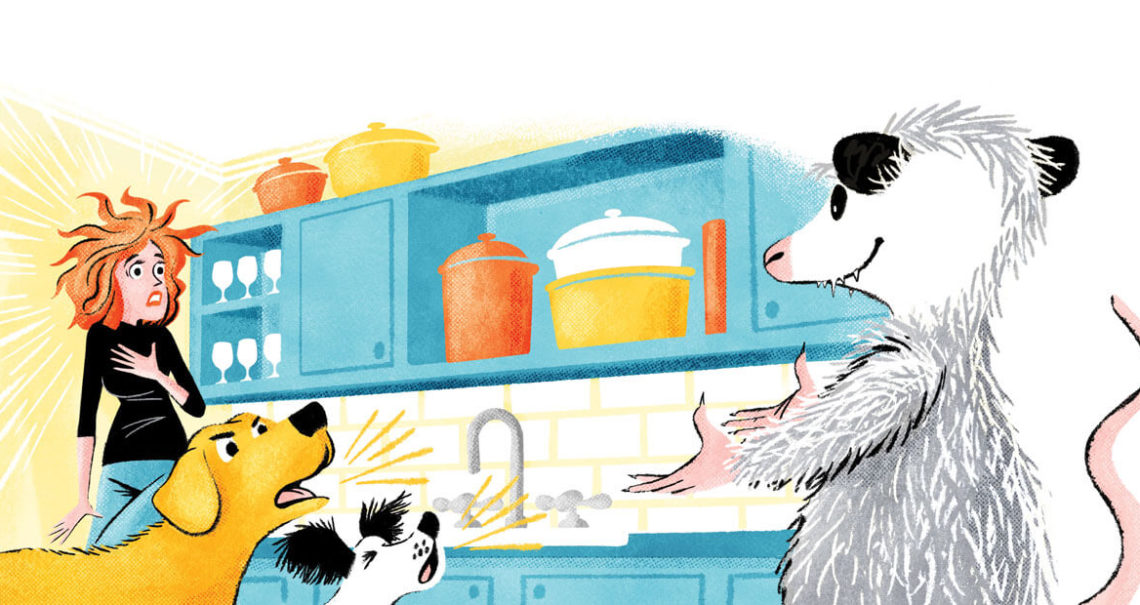 Remember those Clint Eastwood westerns where he’s all grizzled and tobacco-stained, staring down some desperado or 20 in the middle of a dusty street, a classic standoff right before he whips out his six-guns and puts a couple hundred bandits on the ground?

Our Lab, Minnie, ran the opossum out from underneath the outdoor shower at our Morehead City house, chased it for 30 feet across the back porch, and cornered it in the kitchen, where Julie was preparing coffee for the next morning. I was trying to relax with a book, but no. I heard howling barks, some sort of hissing sound, and a series of faintly human shrieks that grew in volume. When I turned the hallway corner, pocketknife in hand, I found one wife on her tiptoes, backed against the kitchen counter; two dogs — even our 14-year-old, arthritic, deaf Biscuit joined the chase; and a single juvenile opossum bayed up in the middle of the kitchen floor. And it’s a really small kitchen. Bawling barks, screeching, pajama-clad bride — utter bedlam right there on Evans Street.

“It’s just an opossum, Julie,” I said, perhaps not tenderly. “And a baby one, at that. Don’t freak out.”

What transpired next was better for the opossum than for the husband, we’ll leave it at that. I’ll just say that no opossums were harmed during the making of this story, but my feelings sure were hurt by Julie’s rather invigorated response.

But I digress. What I really want to talk about is the opossum. This poor creature has gotten a bad rap over the past few centuries, and not just because of its skanky scent or its propensity to drool nasty slime from between its 50 teeth (more than any North American land animal!).

There are more than 60 species of opossum in the Americas, but only one, Didelphis virginiana, is found north of the Rio Grande. Lucky us! Some historians speculate that the “little dogs … that do not bark” given to Hernando de Soto in 1540 by Native Americans somewhere near the South Fork of the Catawba River, possibly near present-day Hickory, were opossums. But I’m not sure de Soto and his large band of merry smallpox-carriers appreciated the gift. Initially regarded as a “monster,” the opossum looked to them like an assemblage of animal and human parts, with the head of a fox, ears of an owl, hindquarters of a monkey, and hind paws with humanlike opposable thumbs. Early explorers were, to put it mildly, freaked out.

Today, hardly anyone champions this creature. Even skunks do better.

The iconic stature of the humble opossum would change dramatically as Europeans plunged deeper into the New World’s interior, and as the science of natural history underwent a remarkable transformation. Comparative anatomy and Baconian science replaced the funky ideas of the Dark Ages. The opossum evolved from a chimerical monster to a symbol of the New World’s possibilities for production. It became the “Wonder of all the Land-Animals,” in the words of North Carolina’s colonial historian, John Lawson. When William Byrd writes of the opossum in his History of the Dividing Line, the tiny young are described in the language of harvest, dangling from the mother’s teats “from their first Formation till they are big enough to fall off, like ripe Fruit from a Tree.” In 1698, nearly an entire issue of Philosophical Transactions, the publication of the Royal Society of London for the Advancement of Natural Knowledge, was devoted to the anatomy of a female opossum that had been collected by Byrd and shipped to London. The mammals can produce a first brood of more than a dozen young by the age of 6 or 8 months and are capable of up to three broods a season. If such a disagreeable creature as the opossum was blessed with these remarkable powers of fruitfulness, how could the New World that spawned it be anything less fertile? 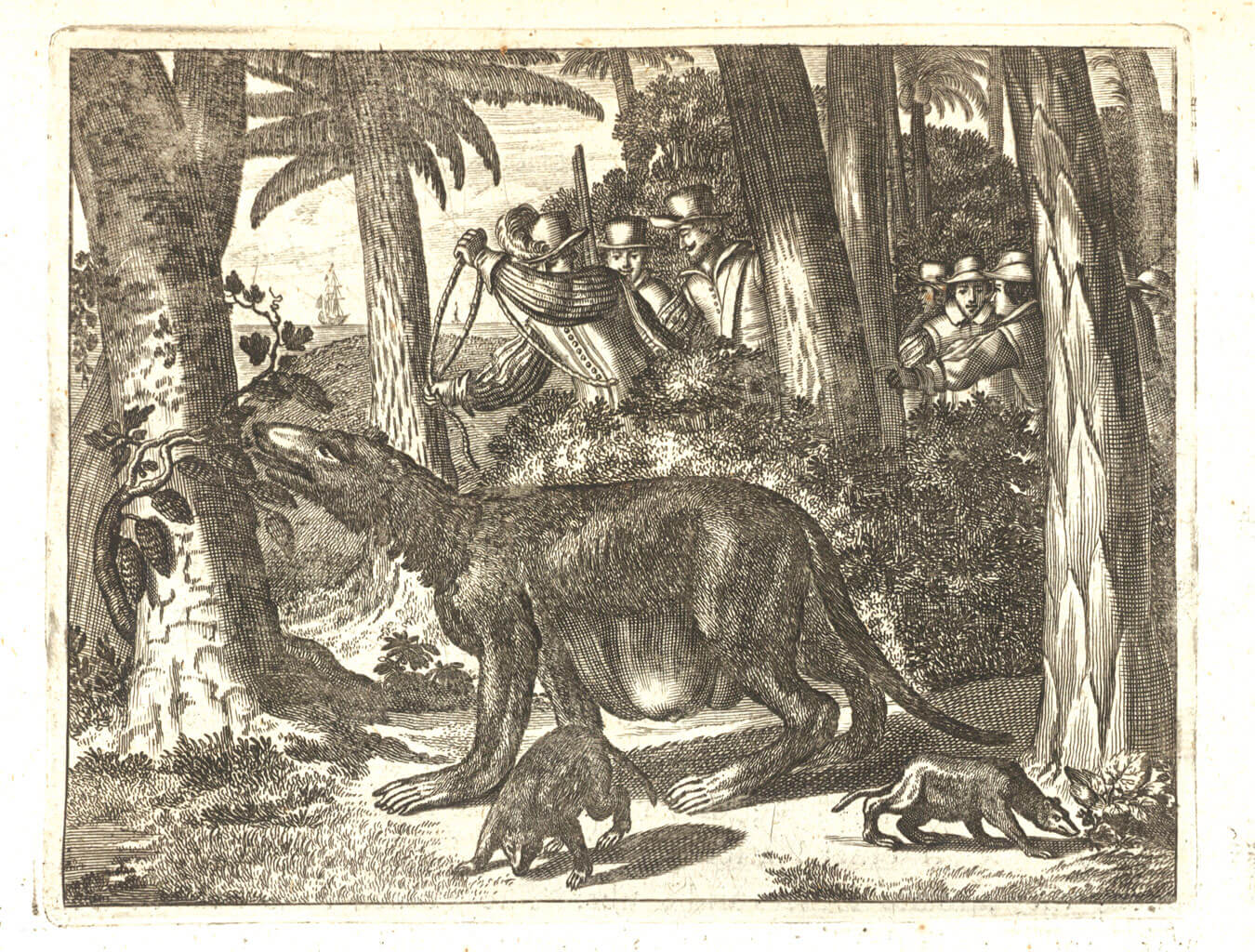 Sadly, the opossum’s reputation makeover didn’t stick. Today, hardly anyone champions this creature. Even skunks do better, all dolled up in the cartoons à la Pepé Le Pew. Within the past 10 years, the opossum’s reputation has been slightly rehabilitated after researchers announced a study that showed that a single opossum might eat 5,000 ticks a year. (Whoops. Sorry. I didn’t realize you’d just had dinner.) But even then, the marsupial isn’t going to win any popularity contests.

I blame Vicente Yáñez Pinzón for getting us all off on the wrong foot — and a foot with an opposable toe, at that! In 1500, the former captain of Christopher Columbus’s good ship Niña and his crew came across an opossum in Brazil, and the hardy sailors went bananas. This was the first recorded description of the animal, and you can guess how it went.

“Monster,” Pinzón wrote, presaging de Soto and his men. In an illustration of the confrontation drawn by London mapmaker John Ogilby, Pinzón approaches the beast — a mother opossum drawn the size of a small bear, with her suckling babies — as if he were closing in on a snarling lion. He’s swinging a very cowboy-like lariat. (He ultimately caught the beast and delivered it alive to the king of Spain. I am not making this up.) His compadres huddle behind in the trees, muskets in hand, ready for the charge, clad in their poofy period garb. The entire scene appears fraught, on the edge of violence and confusion.

To be honest, they all kind of looked like Julie, backed up against the kitchen counter in her pajamas, capable of — well, to be honest, I don’t even want to think about it.