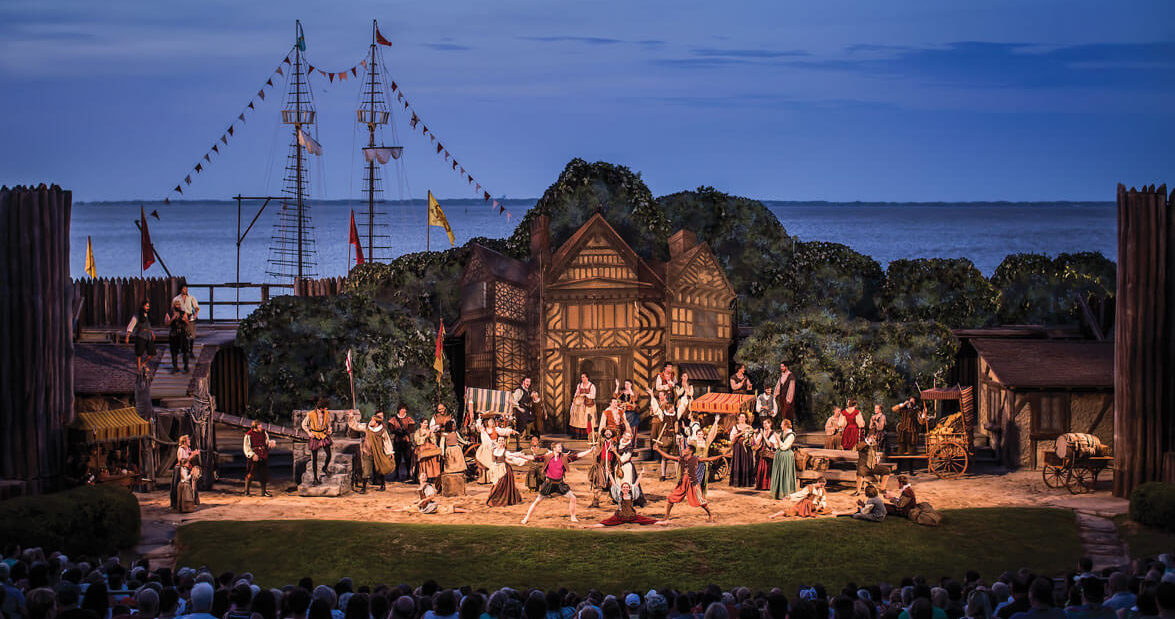 The babies keep coming. There are groggy babies joggled awake on knees and fussy babies lulled with bottles. A baby with a huge yellow bow affixed like a starfish to her fuzzy head reaches out for another baby on a neighboring lap. Some babies remain strapped into their car seats and strollers, conserving their energy for later, when they’ll surely need it. One tiny baby, new to the world and pink as a tulip, barely stirs in his mother’s arms.

“We had to fight off the nap,” Paul Northrup says, holding his alert 9-month-old, Oliver, who’s dressed up in a pin-striped oxford button-down onesie. “Not sure what we’re in for,” Paul laughs, though he seems to mean it. The babies certainly don’t know, either: They’ve been brought to the Manteo offices of the play The Lost Colony to audition for the coveted role of Virginia Dare, the first child born to colonists in America. Every year on August 18 — Virginia Dare’s birthday — the part of the venerable babe is played not by a stage doll but by a real baby. Five babies, actually, each appearing in a different scene as the story progresses. This long-standing tradition is so popular with parents and audiences that producers occasionally have added a second night of “live babies,” as the locals say, for good measure.

This year, however, it appears that supply will outstrip even a two-night demand. 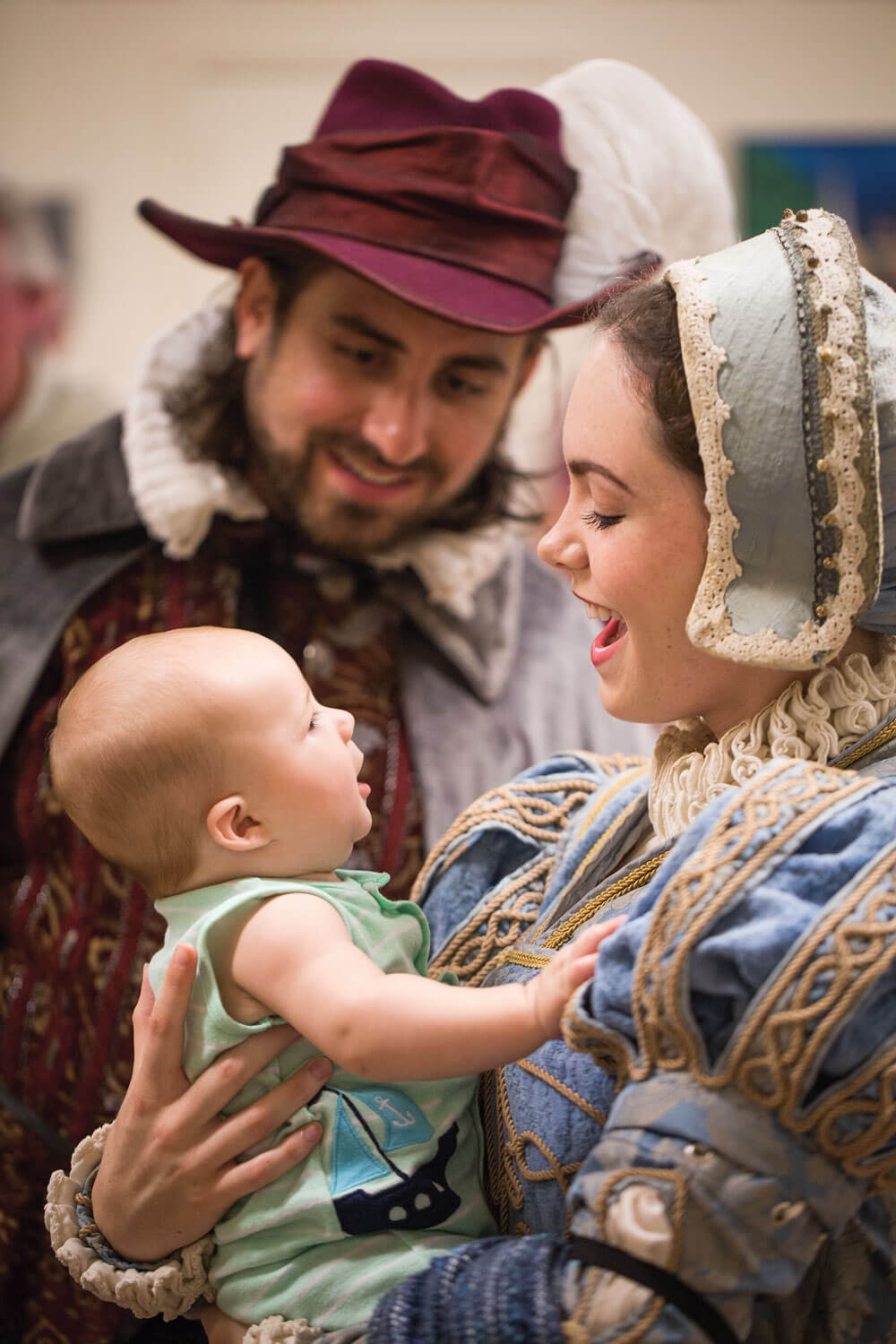 “Ten, 11, 12 …” Bill Coleman, CEO of the Roanoke Island Historical Association (RIHA), which produces the play, is standing by the piano, counting babies. Another mother arrives, baby on her hip. “Thirteen,” Bill says to no one in particular. Disappointing the parents of prospective Virginia Dares is his least favorite part of the job. For now, though, the parents, and in many cases grandparents, are blissfully unaware and still full of hope that their child will be a part of this 80-year institution, the longest-running outdoor symphonic drama in the country and a cornerstone of tourism on the Outer Banks.

A red double stroller rolls up, blessedly holding only one baby. Two years ago, a parent brought twins, and Bill had to put his foot down: “I said, ‘We cannot possibly take two babies from one family.’ ” Which twin the parents picked remains a mystery, even to Bill, who believes the family secret should be kept forever.

Margaret Fearing Northrup just assumed she’d been a Virginia Dare baby, too, like her older sisters, Kathryn and Allison. After all, the one thing all Virginia Dare babies have in common is that none of them remembers the experience.

As a child, Margaret was as familiar with the Waterside Theatre — the play’s charming stage by the sea — and surrounding trails and gardens as any playground, and the theater’s original gift shop building was even next door to her grandmother Lib Fearing’s house. Manteo matriarch Lib is a dogged advocate for “the Grand Pageant,” as she calls it, and has given countless volunteer hours to the production and RIHA; she even boarded actors in her home during summers in the 1960s. Fearings have played vital roles in the play’s history from the very beginning: The original producer, the man who helped convince Pulitzer Prize-winning playwright Paul Green to pen the script and launch the show, was a local leader named D. Bradford Fearing.

But at some point — probably, Margaret says, around the time she got her first memorable Roanoke Island mosquito bites — the youngest in the family was told the bitter truth. “My mother and I are the only ones who have to buy our tickets to the show every year,” she says, referring to the annual free ticket each former cast member receives. “I didn’t make the cut, and she was born in Alabama.”

Susan Fearing, Margaret’s mom, may not have grown up in North Carolina, but she embraces The Lost Colony and its enduring themes of struggle and sacrifice, hope and mystery, as much as any native. Across from her office overlooking Queen Elizabeth Avenue, where she runs a family business with her husband, Malcolm, and daughters Kathryn and Allison, stretches a bay that was once so shallow, it is said that the colonists could cross it by foot. Her living room windows frame a view of the Virginia Dare Memorial Bridge, which skims the surface of Croatan Sound. 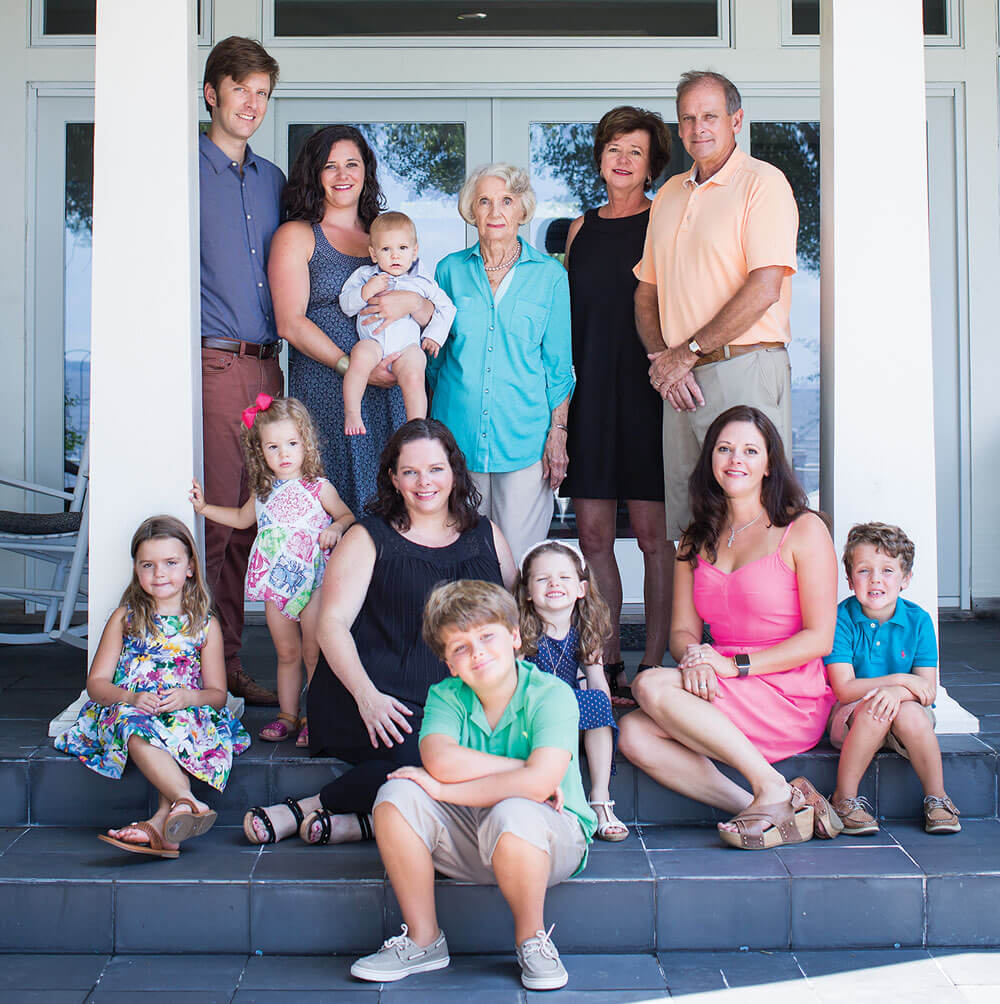 Looking out over the choppy whitecaps and shoreline hemmed in by scrubby pine, it’s easy to imagine the bleak circumstances faced by the 117 colonists. Did they manage to cross the sound and travel inland, or did they die somewhere on the island? Either way, that inhospitable slip of land is now an endearing hamlet that owes its very identity to their existence.

The families who bring their babies to the Lost Colony audition are merely introducing the next generation to this taproot of American history a little earlier than most. Eventually, everyone learns the story of Virginia Dare. When Kathryn was 4 months old, Susan was told what day she should appear with her daughter for the auditions. “There was never any question I would do it,” she says, laughing. “The Fearing family just lives and breathes The Lost Colony. I had a baby, and that baby had to audition to be one of the babies.”

She remembers hoping Kathryn wouldn’t cry. “It’s your first child, so everything your first child does, you’re on pins and needles anyway. But it’s kind of fun when they cry on stage, because then people know it’s a real baby.” Allison came along a year later, and made her debut on stage that August. Then, five years later, it was Margaret’s turn.

Susan is more diplomatic: “Goodness, I had three babies,” she says with a shrug, “so you can’t monopolize things.”

The tradition may have skipped a sister, but it didn’t skip a generation. Both of Kathryn’s children and all three of Allison’s have been Virginia Dare babies. “First kid, I was a nervous wreck, sweating bullets thinking he wasn’t going to get it,” Allison says. “With Olivia, at least I knew what to expect, and with Edgar, it was like, ‘Oh, look at all these nervous moms.’ ”

But Margaret isn’t nervous. Her husband, Paul, passes dapper little Oliver to her lap. “Having just gone through having a baby makes the history more poignant,” she says. “We’re so protective, so careful these days. We don’t even have coffee when we’re pregnant. And there’s Eleanor Dare struggling to survive, to farm the sandy soil — and having a baby. And there’s Virginia Dare, living with all the danger, the hardships, the unknown.”

The baby count finally ends at 15, and the room settles into a state of watchful waiting. Bill will consider a baby’s size, age, temperament, and family connections to the show when deciding whom to cast for the five versions of Virginia Dare: There’s the prologue scene, the christening scene, the lullaby scene, a quick scene with the departing Gov. John White, and the final march scene, where the colonists abandon their settlement in search of food and safety. While all of the scenes are brief, parents tend to prefer an early one. “During the show you’re in the costume room, waiting all that time with a tired baby,” Allison says. “The march scene would be tough.”

But that final processional, the moment in which the beleaguered colonists begin their long march into the unknown, is also a chance to shine. Years ago, one father made the most of the opportunity by training his baby to raise her little arm and point toward car headlights, a gesture she then executed to perfection as Virginia Dare. With the flag atop the set’s chapel illuminated by a somber spotlight, she lifted her tiny hand on cue, as if to point longingly toward the flag. “It made for the most exquisite tableau,” recalls The Lost Colony’s historian.

At this year’s audition, the baby in the room most likely to pull off such a pro move is Hollowell Barker, who is going for an unprecedented second run as Virginia Dare. Hollowell is the youngest — by far — of the company’s some 6,000 alumni, and the granddaughter of the actress who plays Agona, a crowd favorite. Last year, she was cast in utero — impressive enough — and made her stage debut at a mere 4 days old. “I was skeptical,” Bill says. “I didn’t think we could cast someone who wasn’t even born yet.”

Another pedigreed baby in the group, a sturdy 4-month-old in red gingham, is the grandson of Don Bridge, who has played five major roles in The Lost Colony and is currently the show’s narrator. His wife, Lisa, reigned as Queen Elizabeth I for seven years, and their children grew up playing tag in the Elizabethan Gardens and performing, too. Virginia Dare is just about the only role missing from the family’s résumé. 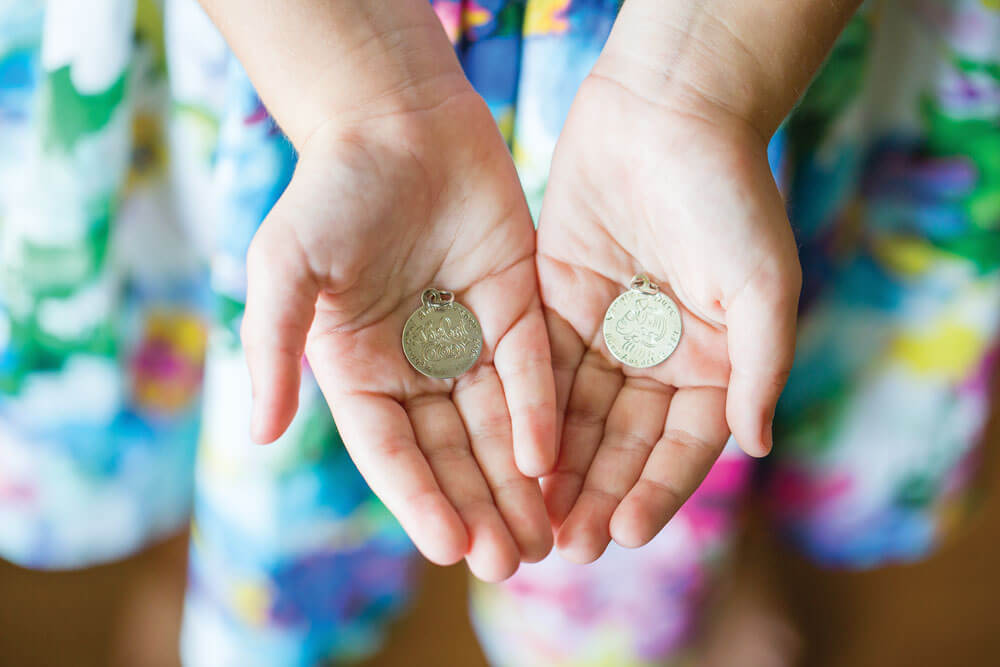 Each Virginia Dare baby is given a silver charm engraved with the year of their performance. These keepsakes belong to Fearing grandchildren. photograph by Chris Hannant

Not every baby present is well-connected, though. The mother of a jolly 4-month-old in a green onesie says her only link to the show — besides watching it, of course — is the one summer she helped her grandpa work the concession stand. “It’s good to have families new to the show and ones who’ve been a part of it forever,” Bill says. “We want to foster a continuing presence in the community.”

All eyes turn toward the doorway, where Eleanor Dare, Ananias Dare, Father Martin, and Dame Coleman, each buttoned and bustled in their Elizabethan costumes, have gathered. Bill steps forward to make the announcement he’s been dreading: Because of scheduling issues, there will be only one night of babies this year. Every parent silently does the math: 10 babies are toast.

As the actors fan out to play with the babies — their big “audition” moment — everyone whips out a phone to take pictures. Eleanor Dare’s serene voice is a balm for anxious parents. Dame Coleman, the colonists’ cranky midwife and nurse, provides endless distraction for the babies, whose eyes widen in bewilderment when they confront her strange bicuspid-shaped hat, known as “The Tooth.”

Little Oliver is easygoing and curious. He doesn’t cry or contort himself into backbends like one tired baby nearby. In a few days, Margaret will get a call saying he’s forevermore a Virginia Dare baby, a status she likens to “your local varsity letter.” The Bridge baby and the pink infant, too, will share the honor of never, ever, having to purchase their own tickets to the show. But for now, all Oliver and his parents know for sure is that they’ve earned themselves a nap.