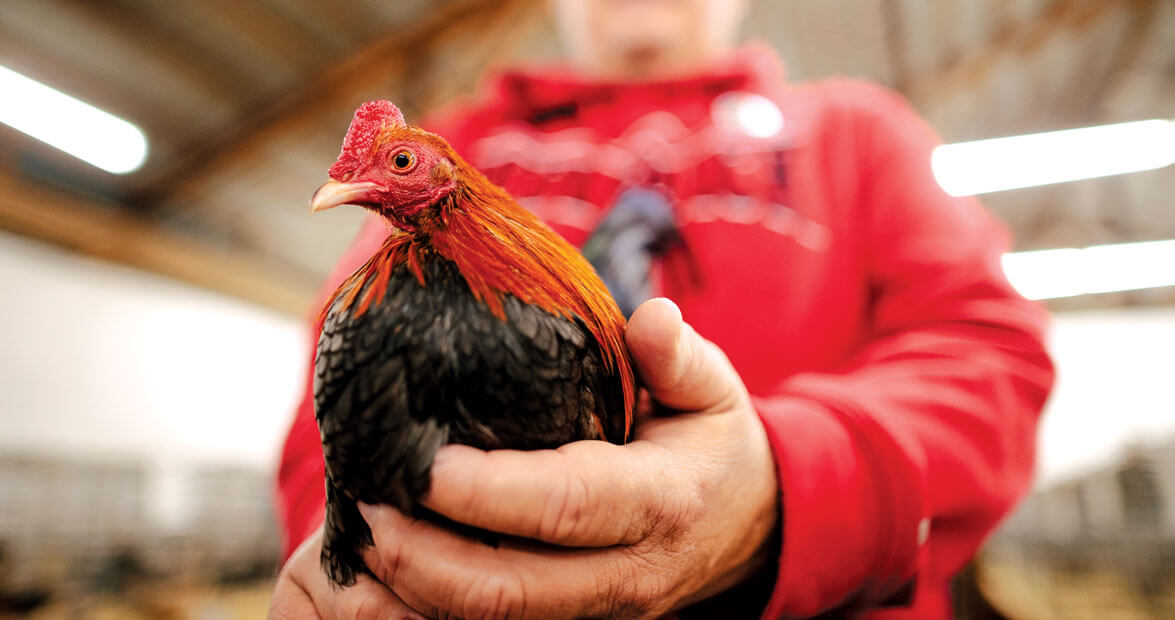 The sound is deafening: nearly 600 chickens lined up in cages inside the exhibit hall at the Rowan County Fairgrounds, all wide awake, clucking, squawking, and cock-a-doodle-dooing. Strung above their cages, a banner reads: “Welcome to Old English ‘Jamboree’ Show of Shows.” The Old English Game Bantam Champion of the World will be selected from among these 11 rows of cages, where some 30 varieties of the breed — black, white, brown-red, lemon-blue, black-breasted (or B.B.) red, golden duckwing, and spangled — are on display.

The stakes are high for the men dressed in ball caps and Carhartts, and they tend to their birds accordingly: grooming wings with toothbrushes and curling tail feathers with pencils. Some toss pieces of dog kibble into cages or fill paper cups with brightly colored, vitamin-infused water — only the best for their beloved show chickens. 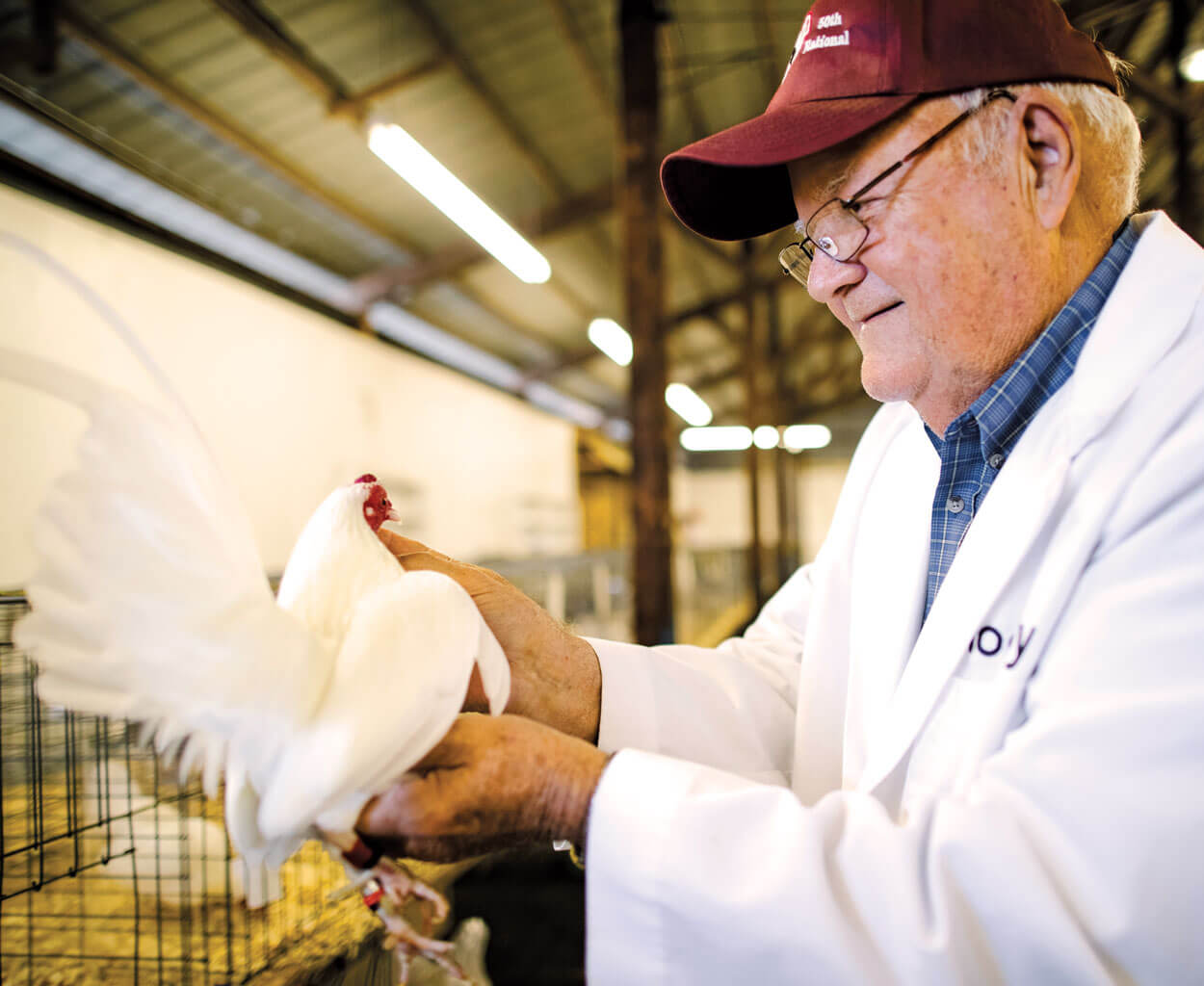 After 12 years of showing his own chickens, Rocky Hughey started judging in 1983. Every judge serves as a clerk for two years before he or she can become certified by the American Bantam Association. photograph by Revival Creatives

“A lot of these chickens live as good as the people that own ’em,” says Neil Mahaffey, secretary of the Old English Game Bantam Club of NC, which organizes the show every year. He’s been here since 5 a.m., setting up, checking people in, and ensuring that every chicken is in its proper place. All morning, exhibitors have been arriving with their contenders, sometimes trying to beat the odds with as many as 80 birds. While the monetary prizes are modest, winners are awarded points that go toward master breeder status, which makes the birds they raise more valuable should they sell them.

“There’s a lot of people that raise this breed, which makes a bigger class size, which makes more competition,” Neil says. “And that’s what these guys thrive on — it’s bragging rights. They want to be the top dog at the end of the day.”

“You can’t raise a show chicken out of a $2 yard chicken. It don’t happen.”

Among those hoping to take home a trophy are club members Greg Hager and his uncle David Hager, from Mooresville. “This is the show to win,” Greg says. He brought 10 blue-reds to compete today. Greg grew up farming, but he only got into showing chickens about seven years ago, when David — a master breeder and 50-year show veteran — gave him his first chickens. “He wanted blue-reds, but I gave him B.B.s,” David says with a sly smile.

Even when he’s not participating in or attending a show, David obsesses over his birds. Every morning, he and his cousin bring their chickens onto the front porch to talk about which ones are best for showing — studying their coloration and feathers, their shape and size. This is what the judges at the Jamboree will be evaluating.

“A lot of people get into this and say, ‘I’ll just buy some chickens and go to the show,’ and it’s a whole lot more in-depth than that,” Neil says. “You can’t raise a show chicken out of a $2 yard chicken. It don’t happen.” Between housing, feeding, conditioning, and breeding, exhibitors spend countless hours and thousands of dollars raising their chickens to be show birds. With so much time and money invested, the competition can get heated. Past exhibitors have even dyed feathers or singed their ends to make them the right color or shape to gain the upper hand.

Neil says that while cheating is rare, such dirty tricks undermine the skill and knowledge that good breeders bring to the show-chicken circuit. “The challenge is to breed and improve, and you never learn it all,” he says. “I’ve been doing this for 40 years, and I still learn something new every show.”

This year, he’s been so busy planning the Jamboree that he hasn’t entered any of his own birds in the competition. “I want to do this as good as I can do it, so I don’t mind sacrificing and not showing,” he says. “I’d love to win this show — I’ve never won it — but I’d rather make it right.” 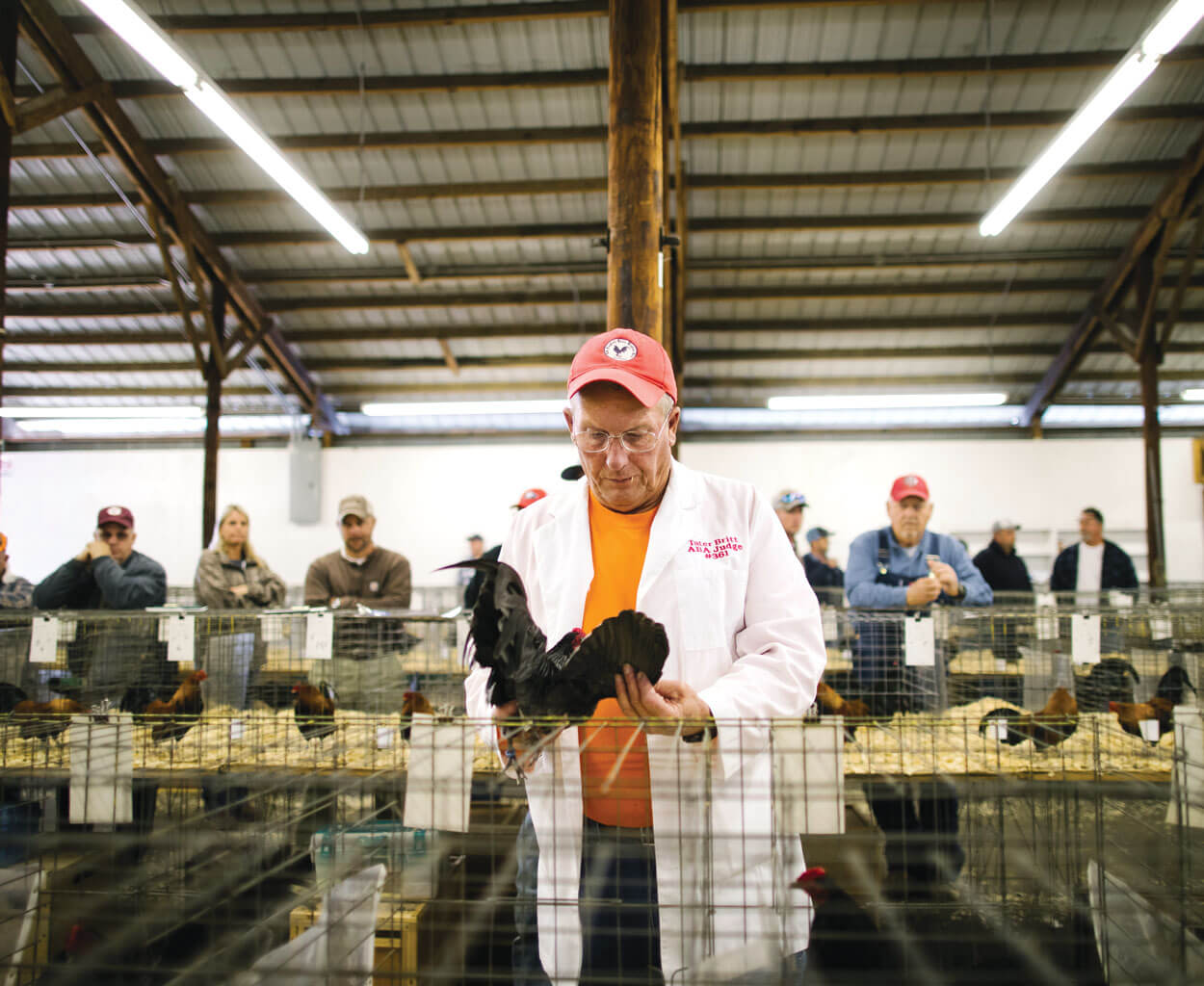 Old English Game Bantams have long been a popular breed in the South. They’re small but hardy, and they’re easy to work with. The first Old English Game Bantam Club national meet in 1958 was hosted by the club’s Southeastern branch, comprising North and South Carolina and Georgia. Eventually, the meet was moved to Hickory and, later, Salisbury, where it evolved into today’s Jamboree 54 years ago.

For many years, the Jamboree was the only single-breed chicken show in the country, drawing more than 1,200 birds from across the nation. Over the past few decades, that number has dwindled to about 600 as state standards to control poultry disease have become more stringent. Many of the older, more established breeders have passed away, and engaging younger folks is a challenge. “A lot of kids will get involved in it, and if they don’t win right out of the gate, then they get uninterested and do something else,” Neil says. “We see a lot of younger people come and go.”

Not all kids are so easily deterred. In the room adjacent to the main exhibit hall, 9-year-old Lanee Branche from Rock Hill, South Carolina, is sucking a lollipop as she strokes her B.B. red hen named Lila. For the past five years or so, she’s been helping her father, Daniel, and grandfather, Gene, feed, water, and clean the family’s 300 Old English Game Bantams, but, for three years now, she’s also been showing her own chickens. “I think she likes it better than we do,” Gene says. “That’s what it’s all about in the future, and a big reason why I’m in it now.”

At 9 a.m. sharp, the judges rope off one of the aisles in the exhibit hall.

For the next five hours, two local judges — certified by the American Bantam Association and dressed in white coats and red hats — examine every bird, selecting the top five in each of the varieties, and the winners to be displayed on “Champion Row.”

Terry Britt — better known as Tater — is the president of the Old English Game Bantam Club of America, and one of the judges for today’s show. He starts making his way around the cages of B.B. reds, while judge Rocky Hughey examines the whites. They open the cages one at a time, gently prodding the birds with small rods to observe how they move, then pick them up for a closer look, lifting their wings and examining their markings. The judges move down the rows, ranking the birds as they go: a cage marked with a “BV” means the bird is the best of the variety; an “RV” means runner-up. When the judging ends, exhibitors rush into the aisle to see how they did. Some of those who didn’t place curse under their breath. Others, like Greg, who says he did “not so good,” just shrug and move on.

The bantams that have already been evaluated — and their owners — are growing restless. The judges have reached the final row in the first round. Feathers rustle and hands fidget as exhibitors congregate around the building entrance and line up along the walls to watch and wait.

At last, Neil calls for the winners of each variety to be moved to Champion Row. The owners of the BVs strut — much like their chickens — from the main exhibit hall to the room where the junior competition was held, where Champion Row is set up along the wall.

Tater walks down the row, pulling out unsuspecting chickens to give them one last look. Nearby, Gene sits with his arms and legs crossed, waiting to see if his blue-red will take home the top prize. He looks relatively calm compared to the crowd eagerly inching toward the cages. 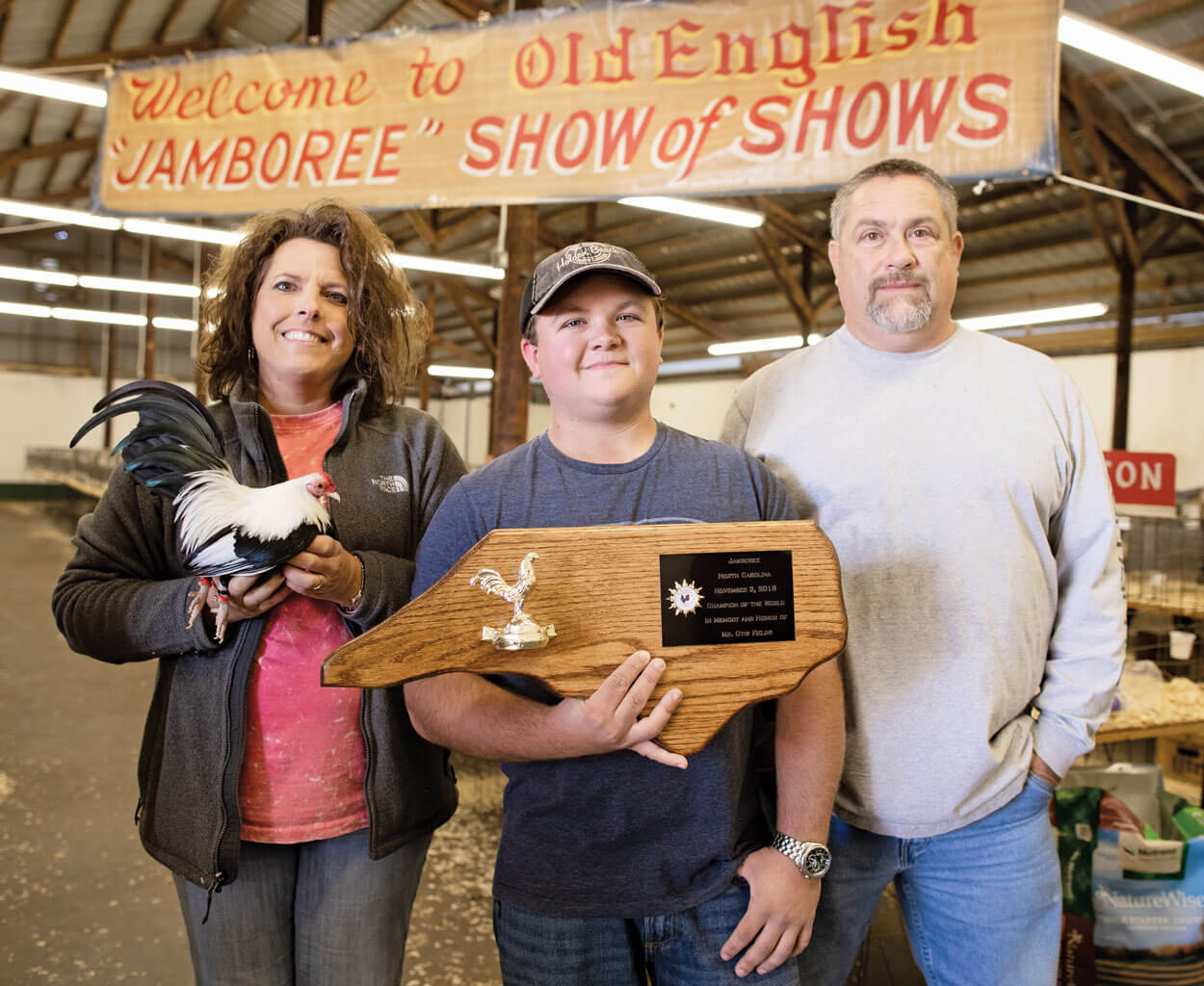 Kathy, Brandon, and Keith Proctor are no strangers to success: They’ve won the Jamboree multiple times with multiple colors, including twice with a silver duckwing, a bloodline that Keith himself developed. photograph by Revival Creatives

When Tater has made his picks, Neil starts assembling the plaques, shaped like North Carolina with either a cock or a hen affixed to the front, depending on the winner. “Does everyone get a trophy?” asks Lanee, who won first place in the junior competition — her first overall win.

The adults chuckle and shake their heads.

A hush falls over the crowd as the winners are announced: in fifth place, a blue hen; in fourth, a spangled hen. A B.B. red cockerel comes in third; a black cockerel in second. Then, the moment they’ve all been waiting for: the Champion of the World. The nervous humans are silent, but their chickens are too excited to keep quiet. The announcer pauses — heightening the anticipation — before revealing the winner: a silver duckwing belonging to Keith Proctor of Kings Mountain, who will take home three of the top five awards.

With so much time and money invested, the competition can get heated.

Keith’s wife, Kathy, steps forward to accept the trophy, then humbly retreats through the crowd. After showing chickens for more than 30 years, it’s Keith’s second time winning the Jamboree with a silver duckwing. Even though he’s a five-time Jamboree World Champion, master breeder in multiple varieties, and 10-time Exhibitor of the Year, he enjoys the fellowship most. “It’s a good, clean hobby that the family can do together,” he says. Kathy helps prep the chickens. Their college-age daughter grew up attending all of the shows. Their son Brandon competes, too, and takes care of the family’s 635 chickens when Keith’s away. Will Brandon keep the family tradition going? “That’s yet to be determined,” Keith says with a laugh. “He likes to win.”

As soon as the trophies are distributed, exhibitors rush to grab their chickens by the handful, loading them up in cages, wooden crates, or even antique beer boxes. (The last are coveted collector’s items among chicken exhibitors.) Members of the Old English Game Bantam Club will stick around for a while to haul out the cages, leaving the building exactly as it was when Neil arrived at dawn.

“All these guys we’ve got here — although we’re a small group — they’re all as dedicated as I am to trying to keep it going,” Neil says. “It’s kind of like a family heirloom: We were handed down this from our peers when they passed away, and they expect us to keep it going.”