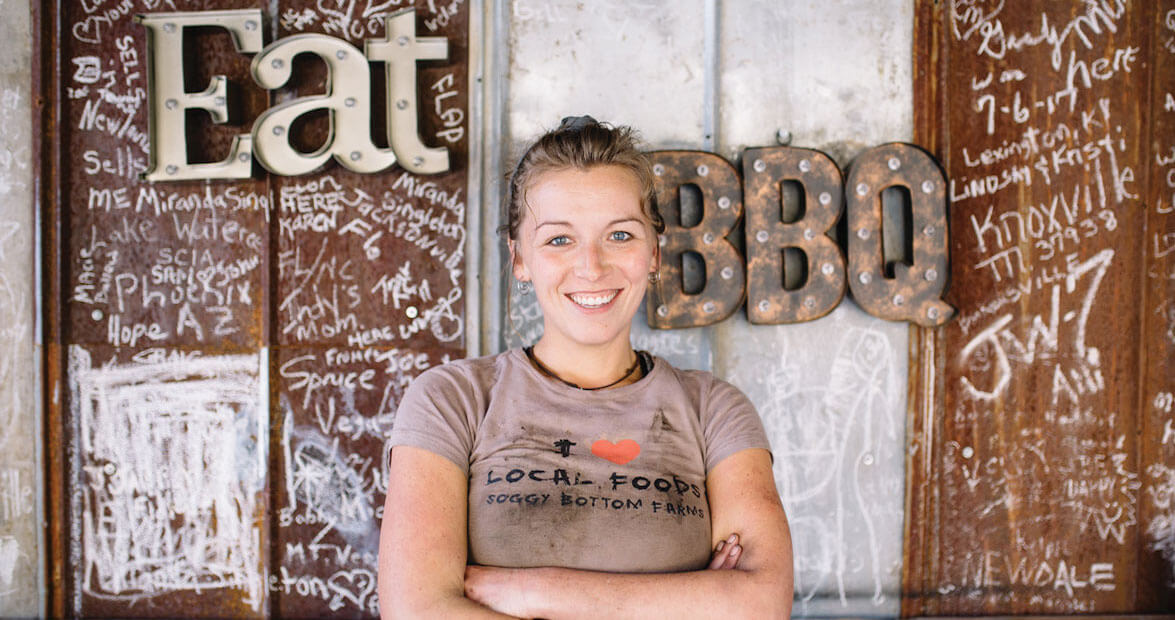 If you could put Lacey Queen in a bottle, you would solve a lot of problems in this world.

Lacey Queen in a bottle would have enough energy to light up a small city, for instance. She has the bubbling enthusiasm of a case of champagne and the stubborn determination of a litter of bulldogs. And she’s used all of those powers to become who she is today: a former hairdresser who’s now a pig-and-cattle farmer with a small market store and a tiny barbecue joint, the Tin Shed, all strung along the roadside in Spruce Pine.

“When I started, people were like, ‘Girl, you are insane,’ ” she says. “I never had intentions of being what I am. I’m just playing the cards I was dealt.” One of those cards came from her parents. On the bottomland of the family’s acreage on Altapass Road between Spruce Pine and the Blue Ridge Parkway, she launched Soggy Bottom Farms. Now, she has pigs and young cows milling around her land, plus more tucked up the hill on her family’s 86 acres, and still more in the yard behind her family’s generations-old house in Little Switzerland, where Lacey lives. “I’ve had pigs ever’where,” she says with a grin.

Her market sells Soggy Bottom Farms meat and other locally raised and gathered products. The ever-changing selection is a good picture of what’s in season in the mountains. You might find string beans grown nearby, fresh eggs, and a cooler stocked with buttermilk, along with bunches of herbs, even herbal remedies. A native Appalachian with an accent as thick as Dolly Parton’s, Lacey knows this land and what can spring from it — if it’s tended right and cared for. The fresh-faced 30-year-old, with her big pile of haphazardly pinned-up hair, smudged T-shirt, well-worn jeans, and muddy work boots, knows hard work. 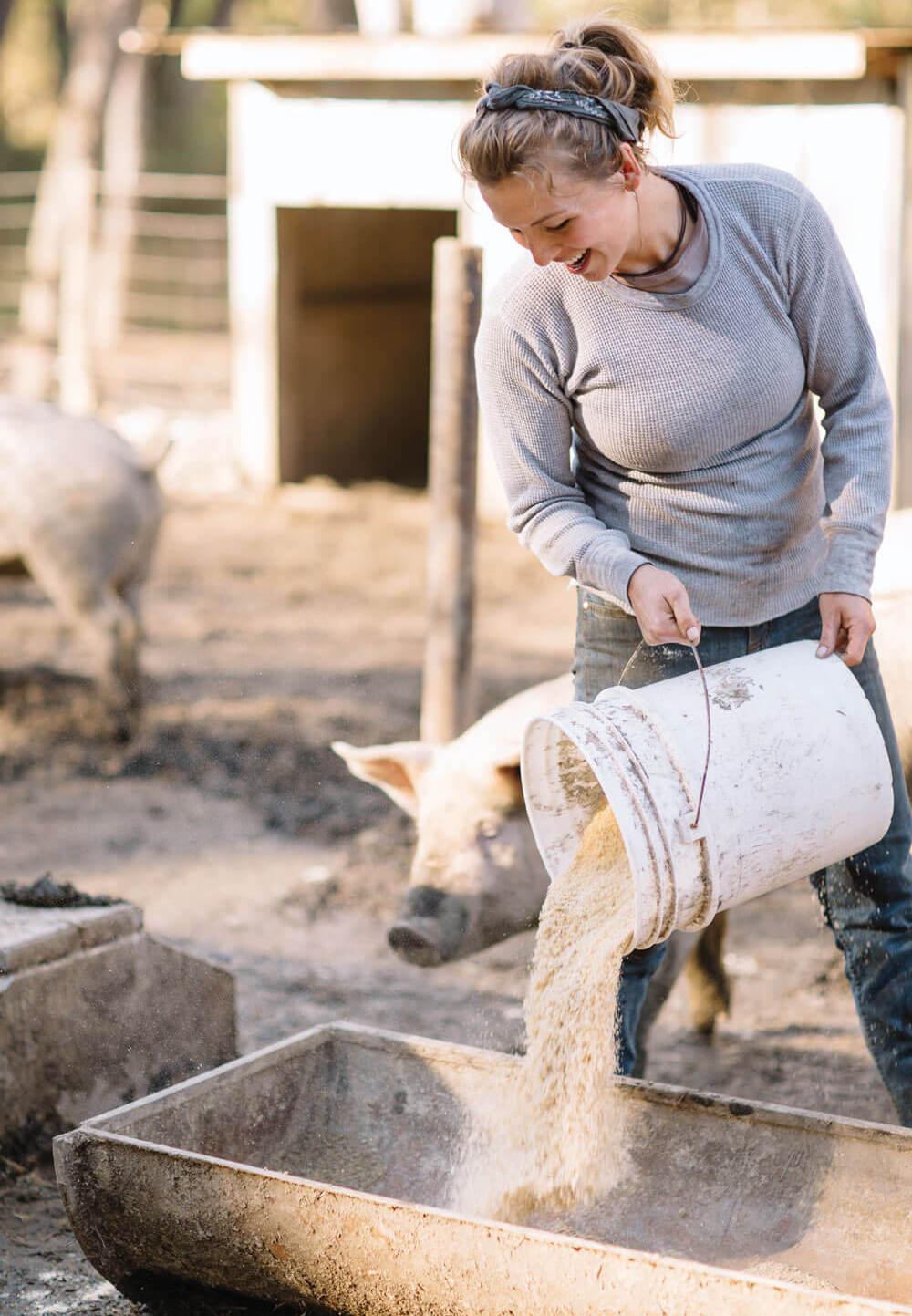 Soggy Bottom Farms in Spruce Pine is a small but busy operation. Lacey tends to pigs, cows, and rows of vegetables for her roadside market. photograph by Revival Creatives

How she ended up becoming a hairdresser and then a farmer is — well, it takes a while to get the story. Lacey calls her conversational style “squirreling,” because she jumps from subject to subject. To get the whole tale, you have to follow her around, through bottle-feeding a pet pig named Oliver, jumping in the car to drive the quarter-mile to check on her pen of young cattle, and then up the steep driveway to show off the pig cooker that produces her smoky barbecue. And that’s just the start of her day.

Lacey is one of two daughters, along with her sister, Bethany, of Mike and Ruth Queen. Mike, who died last year of prostate cancer, was well known in the area as a hardworking man who did a little of everything — farming, building, selling construction and farm equipment. He started working in the local quartz and feldspar mines when he was 13. And he built the family’s house, a rustic and rambling place up on a hill. He even built the trestle bridge over the Toe River that leads to it. “I was blessed,” Lacey says, standing in front of the house and surveying the mountains across the river. “I was raised right here. All this is special to me.”

About that name: Lacey was supposed to be a boy. The Queens had even picked out a name, Mitchell Reid Queen. When they were driving to the hospital after Ruth’s water broke, she suddenly started to fret: What if it isn’t a boy? They didn’t have a girl’s name ready. Just then, they passed a billboard for a local company, Lacey Real Estate. So Mitchell Reid became Jessica Lacey.

In keeping with her origin story, the daughter grew up a tomboy, her dad’s “partner in crime,” always ready to muck in the fields, climb up on a forklift, or drive a tractor. “I’ve always loved this,” she says. “Agriculture, farming, animals.”

In high school, Lacey told the guidance counselors she wanted to be a farmer, but she was told she needed to “take a different path,” she says. “Basically, they said, ‘Girls can’t farm.’ ” She’d always been creative, so she settled on cutting hair. Her interest in animals never waned, though. One night, as she watched the documentary Food, Inc., about the abuses of industrial agriculture, Lacey grew incensed, and then obsessed. She talked about the film and its themes constantly, telling every customer in her salon chair about the need for sustainable agriculture, especially humane treatment of livestock.

The more she learned about responsible ways to raise animals for food, the more she realized that her ancestors, mountain people, had always done that — farming and raising animals the right way. So she decided to start doing it, too: raising a few pigs, mostly Yorkshires, on her dad’s land, and making sausage that she’d sell to customers while she cut their hair. Perhaps not the most natural joint venture, but her sausage was that good. 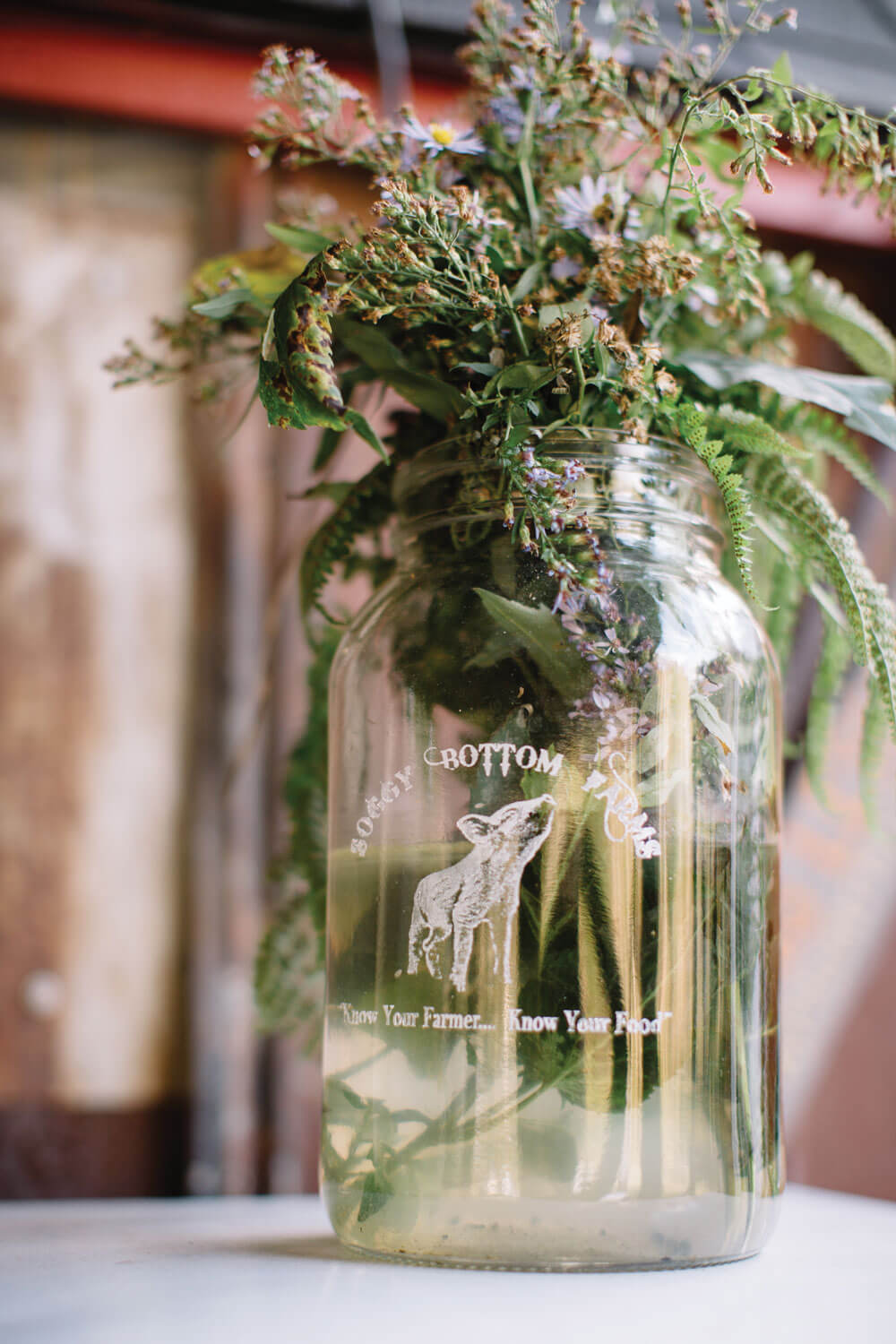 Lacey’s wildflowers are field-to-table, too. photograph by Revival Creatives

Soon, she was breeding hogs and raising litters, hand-feeding them whey from a local cheese-maker. In no time, she stopped cutting hair to run her meat business, mostly as a CSA (community-supported agriculture) program selling subscriptions for her products to cooks nearby. Eventually, she opened the small farm market near her parents’ house. “I had a vision and a dream,” she says. “I wanted to say, ‘I’ve known your pig from the moment it was born until the moment it went on your plate.’”

The Queens have always cooked barbecue, using a big portable cooker that was custom-built by Mike. In the mountains, word gets around. When the family started cooking barbecue made from old-breed pigs Lacey was raising, people began to call: “You got any barbecue you can spare? I’ll pay you,” they’d say. Lacey began making barbecue for local events, starting with a single butt. Pretty soon, she couldn’t keep up with the demand. Her father suggested adding a little restaurant next to the market. He even helped her build it.

“It was like the Lord lined that up,” she says of the Tin Shed, which opened in May 2017. “It was like everything fell into place.” One of the many things that had to fall into place was finding a cook. Lacey admits she’s not much of one herself. But just before the restaurant opened, David Jensen stopped by the store for some eggs. A retired social worker who’s lived all over and loves to cook, David had come to Little Switzerland to help his brother open a restaurant at a local golf course. But the restaurant’s lease had ended, and he was looking for something new to do. 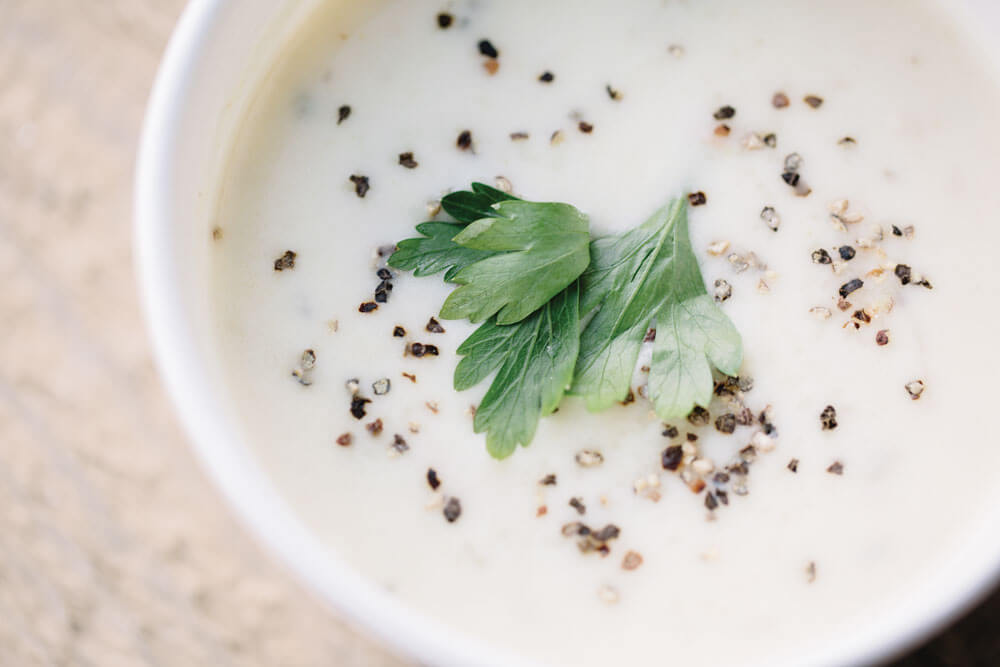 Turns out, David had a real way with local ingredients. His cream of mushroom soup, made with mushrooms grown nearby, is deep, earthy, and rich. And his burgers, made with beef from Lacey’s cows, are every bit as good as the $16 ones found in Asheville. The barbecue is covered with a dry rub for 24 hours, smoked for 22 hours, and then coarsely chopped with lots of tasty outer brown bits mixed in. 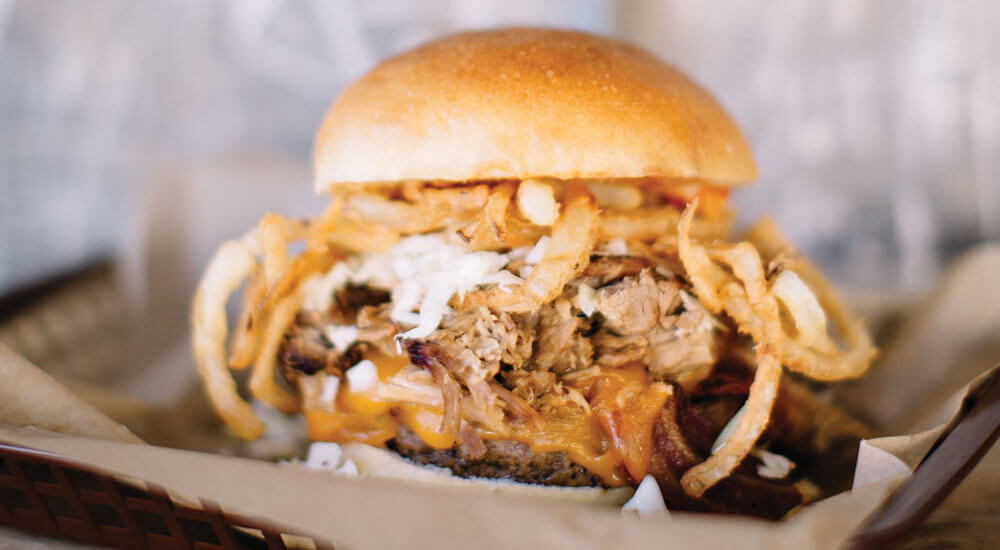 Lacey Queen raises her pigs using sustainable practices. She believes that happier, healthier animals make for a tastier final product at her market and restaurant. photograph by Revival Creatives

David’s quiet and thoughtful manner counterbalances Lacey’s quick, improvisational style. “He wants to throw frying pans at me sometimes,” she teases him. David puts it another way. “Lacey brings a knowledge of community, good farming, sustainable things,” he says. “Not just pigs and chickens, but things in the woods, an alternative way of looking at the world.” Service is a walk-up window with outdoor seating, so the restaurant closes in the winter. On a sunny afternoon, locals come by for sandwiches and ice cream. Tourists from all over the country have written their names and towns in chalk on the front walls. “A farm is 24/7, a restaurant is 24/7,” Lacey says. “You combine the two, it’s a lifestyle. And probably why I’m single,” she jokes.

Maybe so, but she’s clearly loved. Jerry King, 72, is one of the locals who makes a point of stopping by. An auctioneer, he was close friends with Lacey’s father. “You lead by example,” he says to her. “All she’s ever seen is her mother and daddy work. I tell her, ‘Lacey, you’re on the little side of something big. You can grow this brand.’ ”

For now, Lacey is just trying to do everything the way her dad would have wanted her to do it. “He was the one who told me, ‘Whatever your dreams are, if you focus, you can do it,’ ” she says. “He believed in me.”