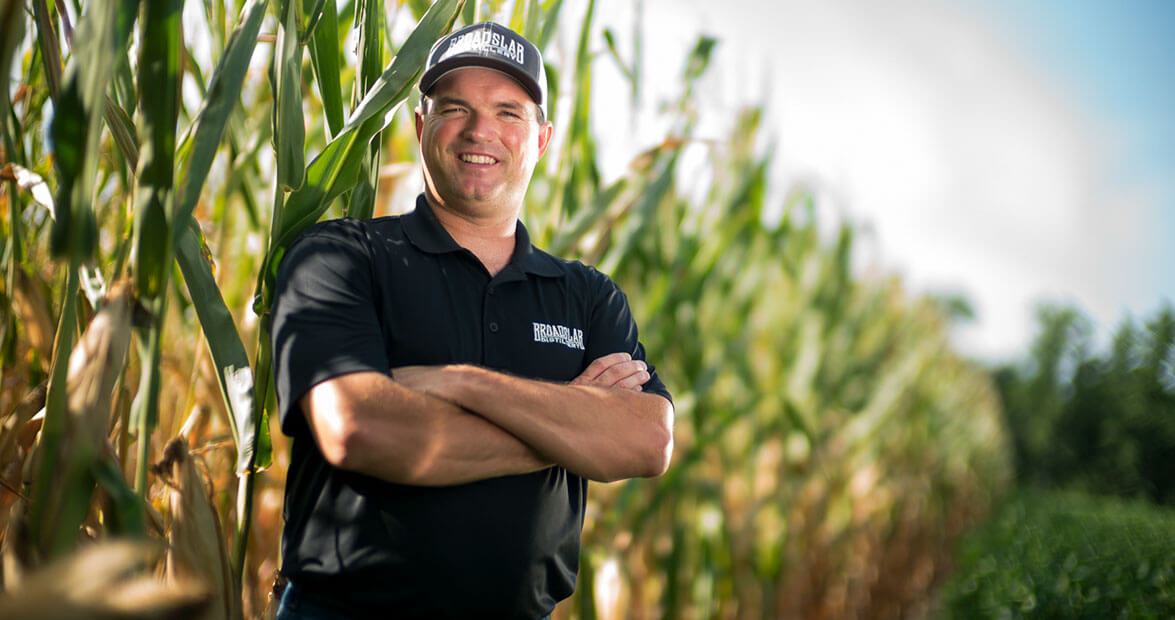 “Me and my granddaddy stayed in a single-wide trailer,” says Jeremy Norris, pointing across a flat field toward the now-empty spot where the mobile home once sat. His granddaddy was Leonard Wood. His nickname was Happy. People called him Woody. Jeremy called him Pa, since Jeremy’s real daddy left right after he was born. Pa didn’t have much. He used a “piece-of-junk tractor” to farm 30 acres of land a few miles east of Benson. He sold Irish potatoes, watermelons, sweet peppers, collards, cabbage, and other vegetables at a roadside stand on the edge of his land, underneath a wide, shady oak tree. The stand was his only source of income. It wasn’t much. But it was enough.

Pa’s mom owned the farm, which had been in the family since the 1840s, when it was cleared by hand and plowed by mules. The family tree grew, and the farm was divided among the children and, later, their children’s children. By 1980, hundreds of acres had dwindled to 30, and Pa’s mom decided to auction off what was left. Everyone told Pa to let it go. He couldn’t.

But Pa didn’t have the money to buy it. A neighbor agreed to split the land with him and buy half. The price was still too high. With a loan, he was able to buy the other half, but to make the loan payments, Pa decided to sell off the modest two-story house he’d built himself, where he and his wife and Jeremy lived when everything was great and well and good. Still, Pa was heavily in debt.

“We were broke,” Jeremy says. But Pa saved the farm.

Pa kept eking out a living, one bag of produce at a time. After 13 years, he finally had enough money to build a new house for himself and Jeremy out there, next to the oak tree. “It was a miracle that it worked out,” Jeremy says. Pa kept his land through sheer determination. “He was gonna tend it ’til his last breath.” And he did.

Jeremy knew he wanted land of his own, but it wasn’t until 2005 that he and his wife had saved enough to buy back some land next to Pa’s that had once belonged to his ancestors. He immediately started bleeding money. “Lost my ass,” he says in a deep twang. “Two years in a row.” In an era when most farmers need thousands of acres just to make a living, Jeremy had fewer than 60.

Jeremy couldn’t just grow vegetables to survive like Pa had. To keep his farm, he’d have to depend on the other thing Pa used to do, decades ago, out in the woods.

Long ago, Jeremy’s kin learned a simple economic lesson: Growing corn brought in a little bit of money. Converting the corn into liquor could bring in more. Jeremy’s great-great-granddaddy used to load his homemade whiskey onto wagons bound for Fayetteville. Pa first saw a still at age 5 and was running one by age 13. Used to say he had a doctorate in bootlegging. He stopped making moonshine in the 1950s, when federal agents shut him down.

Without meaning to, Pa passed on bits and pieces of what he knew to Jeremy. He once drew a picture of a still for Jeremy and explained how it worked, but never answered any technical questions. “You need to find something else to concentrate on,” he’d tell Jeremy. Unbeknownst to Pa, Jeremy fermented his first batch of wine at age 13. By the time he decided to start his own distillery to make the farm more viable, he knew what he was doing. Pa suggested that Jeremy should make moonshine the legal way. Getting busted had taught him a lesson. 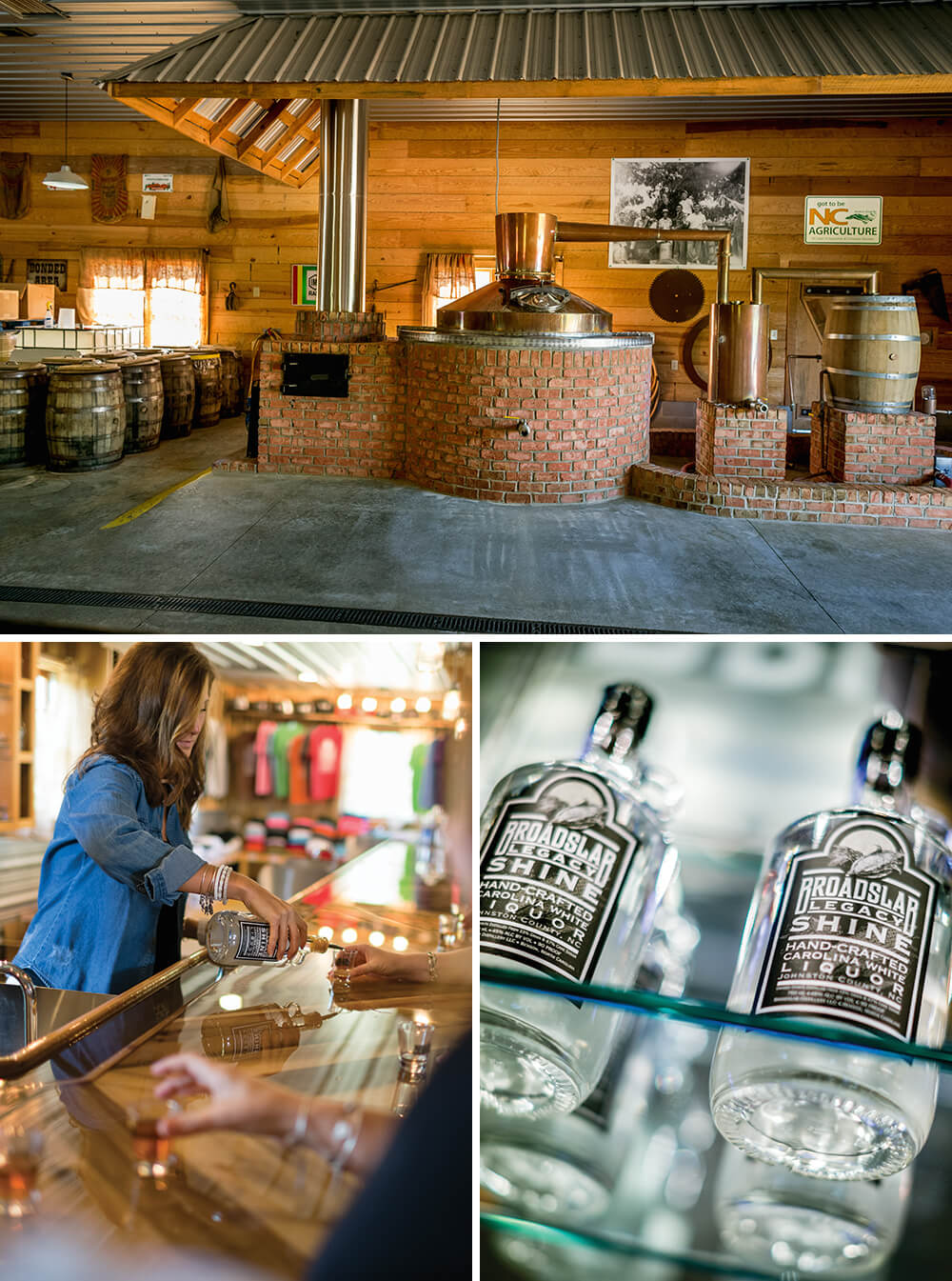 Broadslab’s tasting room lets visitors get a sip of the stuff that’s made on the other side of the building, in Norris’s 500-gallon hand-built still. photograph by Charles Harris

Five years later, on August 1, 2012, Jeremy finally opened Broadslab Distillery. He used his family recipe with a few tweaks, and the end result is smoother. Cleaner. “Better,” Jeremy says. That recipe includes white dent corn that’s grown on Jeremy’s land. He plants it in April. Harvests it himself toward the end of September. Next to a pond behind the distillery, Jeremy pulls open the bottom of a grain hopper, and kernels come spilling out into his hand. “Hard as a brick,” he says. Non-GMO corn only yields half as much per acre as genetically modified corn. Most large farms don’t see the payoff, he says, “unless you’re doing what I’m doing.”

What he’s doing is a hell of a lot of work. Jeremy’s a farmer, distiller, welder, repairman, builder, and tour guide — or, as he puts it, “a one-man show.” His shortest days are 12 hours long. A few wooden chairs sit next to the still. Jeremy never sits in them. No time. He’s still in debt, and he’s not turning a profit yet. Is it worth it? “Yes and no,” he says. “Not financially. But it’s what I want to do, so for me, it’s worth it in a different way.”

Jeremy, now age 41, has two boys of his own. His 16-year-old wants to go to college, but the younger one, a seventh grader, isn’t interested, at least not yet. And that’s another reason why Jeremy went the legal route. He wants to have something to pass down. The farm. The distillery. Everything. The kid’ll have more of a head start than Jeremy did.

“Farmin’ ain’t easy,” Jeremy says. But soon, he thinks, he’ll finally be in the black. After Broadslab was featured on an episode of A Chef’s Life, business and tours picked up. Jeremy built an event space, and couples get married inside a brand-new building that resembles a barn. He has a new tasting room now, too. The old one, which once occupied the house by the oak tree, might become a restaurant. The family farm is bigger than it’s been in generations, and his children can now wander the land that he once roamed as a kid. “It’s a nice way to grow up,” Jeremy says. “Have a little bit of land. Have ground to stick your feet on.”