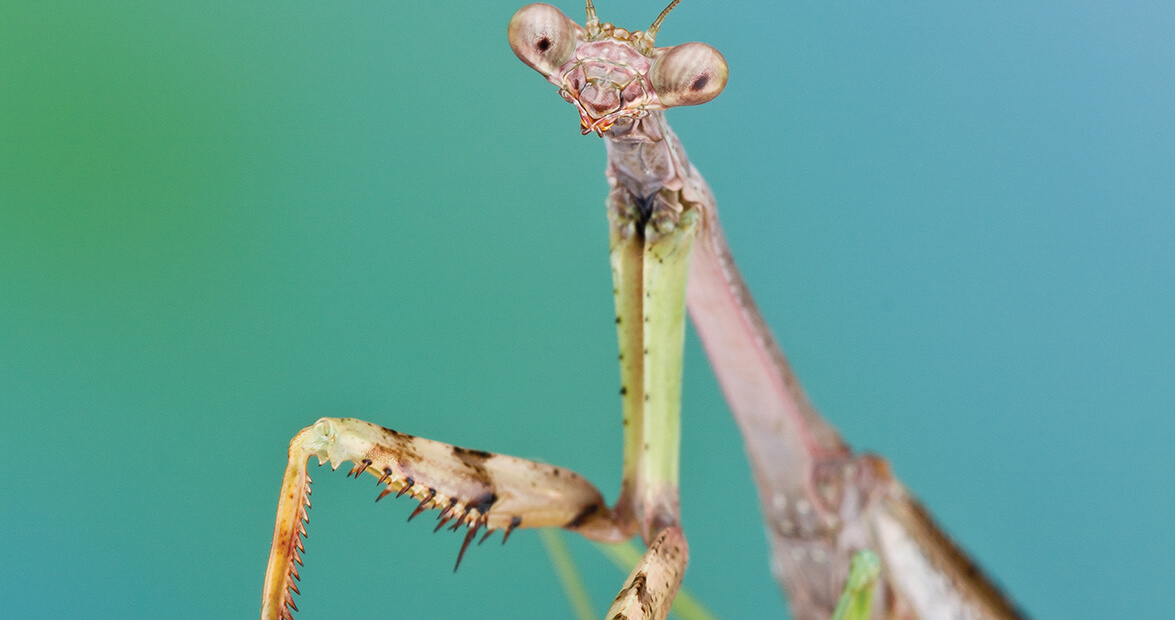 You don’t hear this question very often: If you could be an insect, which insect would you want to be? It’s not an outlandish inquiry. What bird would you like to be? You hear it all the time. What dog? Cat? Fish? Common questions, those. But if you woke up one morning, having metamorphosed into a small creature with a tri-segmented body and a hard exoskeleton, and you had the choice of what insect you would see when you looked in the mirror, what bug would it be?

This is a good time to ponder such a question, because this is the end of the season for North Carolina’s most awesome insect, the bug we’d all like to be if we had to be a bug: the Carolina mantis. Known by its descriptive nickname, the praying mantis, it’s the smaller, more subtle native cousin to the introduced Chinese mantis.

Hatched in the spring and maturing through the summer, Carolina mantises face a ticking clock these days: They must breed and lay eggs before the first frost of autumn. Nearly impossible to spot when hidden in dense summer foliage, Carolina mantises hop and wander widely on sunny early fall days as the females lay their eggs in a cocoon-like cluster called an ootheca.

The ancient Greeks called the praying mantis “diviner” or “prophet,” monikers most likely derived from the position a praying mantis assumes as it hunts for prey — head raised, front legs folded, each heavily spined femur folded into a groove in the corresponding tibia. One might imagine, as the ancients did, the insect in a posture of supplication to the gods, or prayer. Instead, it is simply armed for a meal, cocked for a lightning-quick strike during which it can snatch butterflies, caterpillars, and grasshoppers with those raptor-like legs. The mantis then eats its hapless victim — sometimes before its prey is even dead.

Such a brash display of carnivory, in addition to a head that swivels 180 degrees and the habit female praying mantises sometimes have of decapitating and devouring their mates, sparked myth and folk tales aplenty about praying mantises. Old country folk claimed that the brown spit of a praying mantis would blind a man. Or that a horse or mule that ate the insect would fall stone-dead — giving praying mantises the rural nickname “mule-killers.”

If your upbringing was anything like mine, the praying mantis was a central figure of your childhood summers. The capture of one of these bloodthirsty bugs — most often the larger Chinese specimens — conferred a hero status on whatever kid made the score. We’d stuff a big pickle jar with grass and sticks, toss in the beast, and cap the jar with aluminum foil pierced with a fork. We’d feed the tiny gladiators grasshoppers and crickets, though they turned up their noses at strips of bologna. After a few days we’d tire of the show, and let the mantis go.

See a Carolina mantis these days, and you can be sure it’s on the last of its six legs. After breeding and laying eggs, all the adults die within a few weeks. That’s it. A few short months of caterpillar sandwiches, polish off a boyfriend or two, and it’s off into the frosty fall sunset. Maybe being a Carolina mantis, if ever we had to be a bug, is not all it’s cracked up to be.