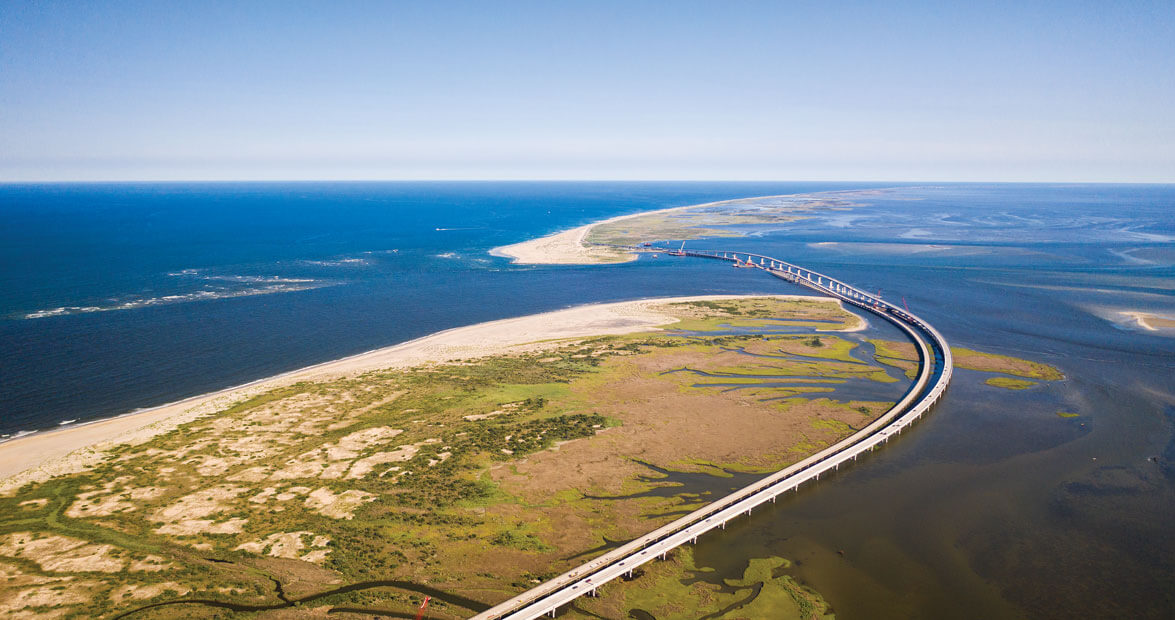 Somewhere near here, a long time ago, Calvin Midgett had a rough night.

I climb a dune near the southern tip of Bodie Island. Out on the tidal shoals, a stiff northeast wind has stacked up rolling swells four and five feet high, and as they break, long lines of foamy spume trellis down-tide, like a squid’s thin arms. Gulls wheel in the wind, shrieking, on the lookout for dazed baitfish battered and confused in the chaos. The cleft in the island is broad and blue, a storied passage: Oregon Inlet.

Just seaward of the inlet, a trawler churns toward shore, threading the shoals that frame the open water like an angry parenthesis. It’s a journey steeped in lore. Oregon Inlet is feared and beloved. It is a boulevard for watermen, a portal to the Gulf Stream, a destination for anglers, birders, and beachcombers. But it can be a fearsome corridor. Boats and bodies have been lost to it. It can be calm enough for a canoe, or a frenzied waterway few would dare to course. Hour by hour, it seems, the inlet shifts with the tide’s flows, mutable yet enduring, somehow as eternal as a mountain.

Which is not the case. And which brings us back to Midgett.

He was a fisherman, a farmer, and a part-time mapmaker for the U.S. Coast Survey, which was tasked in September of 1846 with producing detailed charts of the Outer Banks. Midgett was on his horse, somewhere on Bodie Island, somewhere near this dune I’ve climbed, when a sudden squall hit from the southwest, in the mid-morning hours of September 8. The storm built with fury. Mounted, he could see his home three-quarters of a mile away in the squall, but the furious gale drove Pamlico Sound’s waters over the marsh and over the island, drowning the beach and forcing Midgett to the only dry ground around — the top of a dune.

His fate was later recounted in Appendix No. 13 of the Report of the Superintendent of the U.S. Coast Survey, issued more than a year later. Midgett “sat upon his horse,” wrote C.O. Boutelle, assistant to the superintendent, “on a small sand knoll, for five hours, and witnessed the destruction of his property, and (as he then supposed) of his family also, without the power to move a foot to their rescue, and, for two hours, expecting every moment to be swept to sea himself.”

When the storm abated, the waters receded, and Midgett was alive — as was his family. And there, from the dunes, he was the first to see the pair of inlets that had sliced through Bodie Island. One would ultimately fill with sand, but the other remained open, and is open to this day. The first vessel to safely pass through the new inlet was a side-wheel steamboat hellbent for safety during a later storm. That boat would go on to work the shipping ports along the Pamlico River and Sound for years, ferrying troops and supplies in the region during the Civil War.

Her name was Oregon.

North Carolina’s barrier island inlets are more than a means of conveying commerce on the coast. Inlets breathe with the daily movements of the tides. They inhale water from the sea, and with each inspiration, an unseen trove passes from ocean to sound. Zooplankton, baitfish, and predatory fish all ride the tides through the inlets into the vast sounds behind the barrier islands. The sounds hold their breath in the brief suspension of slack tide. Cool water washes through the marshes. And then the sounds exhale, washing sediments and sands, fish and nutrients, back out to sea. It’s a cleansing repetition, orchestrated by the moon and sun.

Over the centuries, numerous inlets have opened and closed along the Outer Banks. In fact, since the beginning of European exploration, there have been some 30 named inlets between Cape Henry in Virginia and Bear Island. Their names are a roll call of the famed and forgotten: Old and New Currituck. Musketo. Gunt. Chickinacommock. Swash. Cheesemans. At the turn of the 17th century, there were a half-dozen inlets north of Cape Hatteras. The number fell by half by 1900. Of those, only Oregon Inlet remains.

And even today, there’s a buzz on the coast when storms blow open a new inlet in the Outer Banks. In 2005, Hurricane Ophelia carved a new inlet through South Core Banks about a mile south of New Drum Inlet. My buddy Lee Davis and I hit the water. We loaded sea kayaks with camping gear and paddled across Core Sound. The new island, framed by the inlets, was hardly a mile long, and few people knew it even existed. For a magnificent three days, we had it all to ourselves, camping on the beach, casting to red drum and sea trout in the surf, and feeling like we had discovered our own new world. 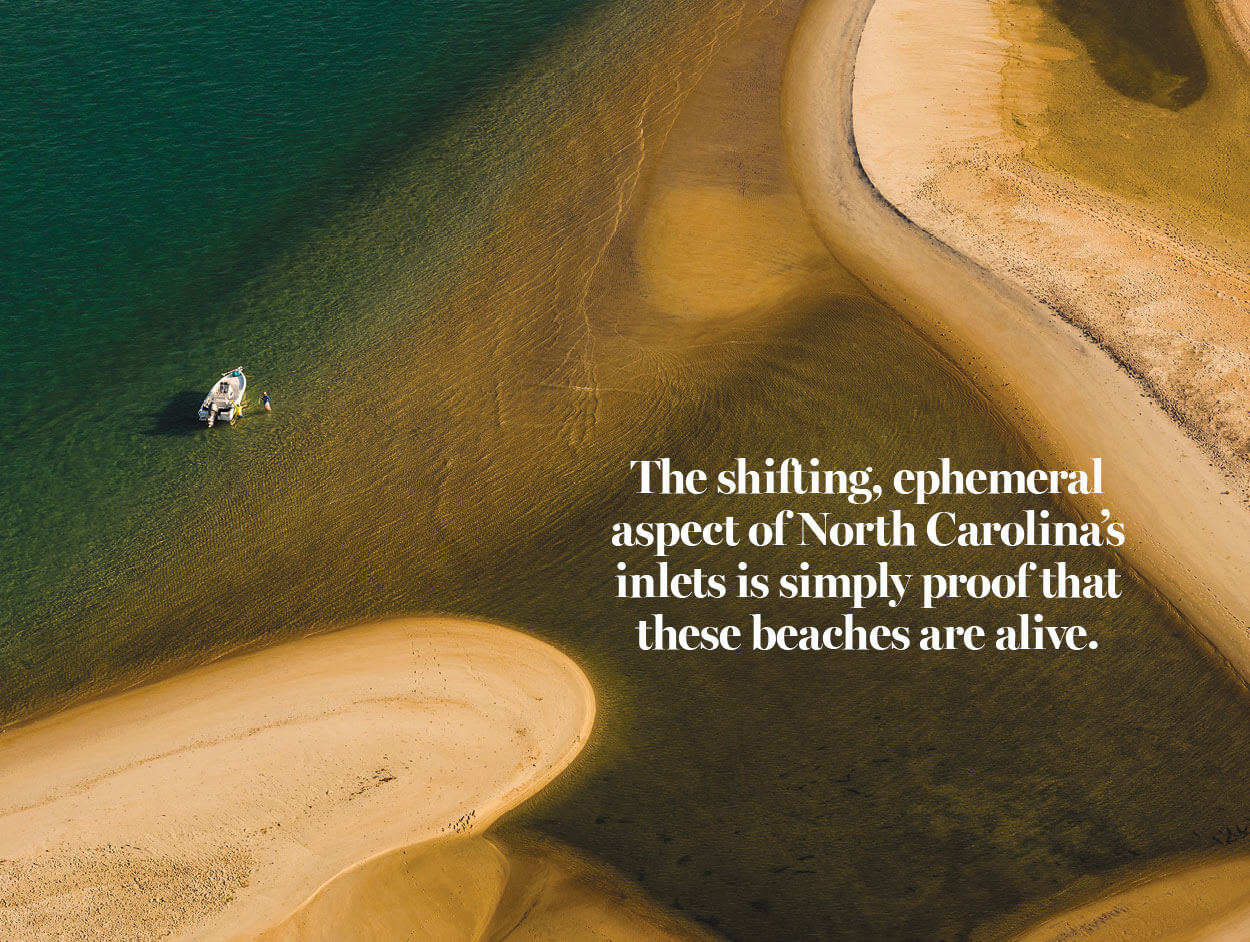 On Bodie Island, from my current dune-top vista, I can see a vast sweep of undeveloped beach along the Cape Hatteras National Seashore. The odd doubled-up spans of the old Bonner Bridge and the Marc Basnight Bridge, its brand-new replacement, scribe part of the skyline, and rolling dune-tops crest to the north and south. I try to imagine Midgett on one of those meager summits, horse half-crazed in the gale’s onslaught, roiling water in every direction, soaked under his oilskin, watching his home crumble in the fury. He would have leaned into the wind and calmed his horse in the storm, wondering what such violence would wreak on the ribbon of sand that held his whole world.

And when the waters receded, he must have marveled at the power of wind and sea to slash and shift and reshape the very land upon which he stood. Few North Carolinians have witnessed such a rare event, the making of a geological landmark in a mere few hours. But I bet that old fisherman understood even then that change on these islands doesn’t point to fragility. The shifting, ephemeral aspect of North Carolina’s inlets is simply proof that these beaches are alive. They breathe in, they breathe out. And they ready themselves for whatever comes next.