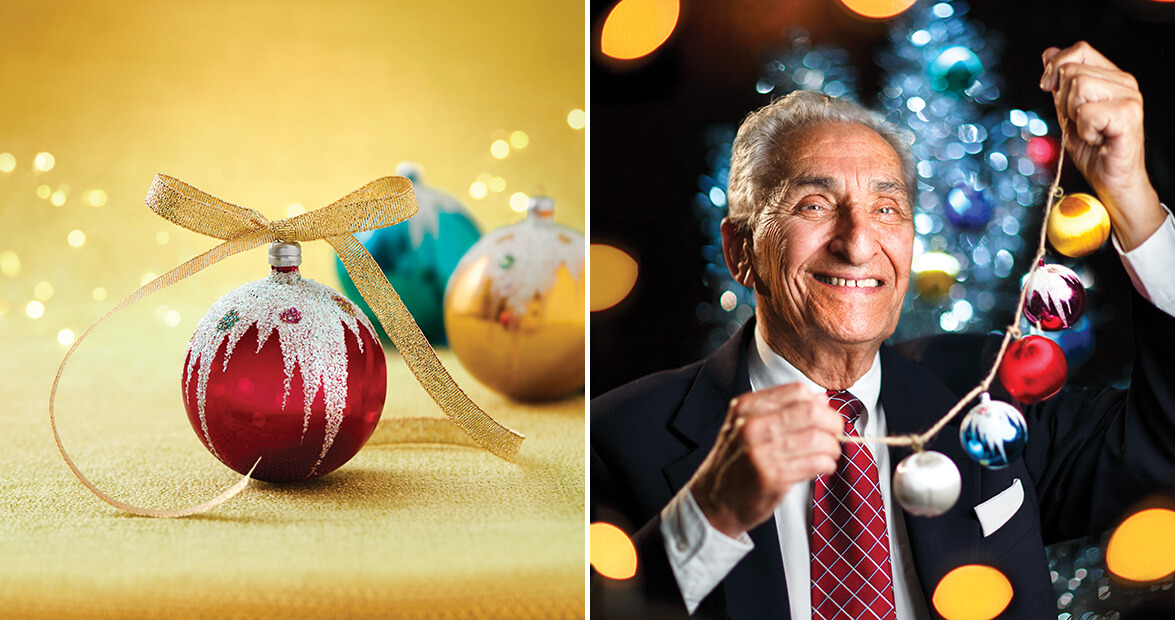 Yes, it is obviously ironic that Marshall Rauch, a Jewish man, was once the largest Christmas ornament maker in the world. He is 93 years old, and has heard — and told — every possible joke about it. The man put a doormat emblazoned with “Shalom” outside one of his ornament factories in Gastonia. He once called himself the Jewish Santa Claus. “All my friends used to tease me: ‘How do you feel about making ornaments for the Christian religion?’ ” Rauch says. “I said, ‘I have no problem. One of our guys started Christianity.’”

The story he tells about how he fell into the Christmas ornament business is almost word for word the same story he’s told for decades. It goes like this: One day, Rauch, who owned a textile mill, got a call from a guy named Bill. He knew lots of guys named Bill. The conversation started off normally enough. How’s the family? How’s your golf game? Then Bill had a question. He’d seen some Japanese trinkets — little fake apples — that had been wrapped in satin string. Could Rauch’s mill wrap a Styrofoam ball the same way? If you can do it, Bill said, we’re going to do a lot of business together. Finally, Rauch asked the important question: Which Bill is this? Bill Spiegel, said the man. Of Chicago. Of the Spiegel catalog.

“They were big,” Rauch says. He committed to Spiegel without being sure if he could pull it off. After weeks of trial and error, a plant superintendent finally visualized the solution after a lunchtime nap. Rauch ordered new equipment, Spiegel placed the order for Christmas 1962, and soon Rauch’s plant, Pyramid Mills, was cranking out hundreds of thousands of satin ornaments. The Spiegel order doubled Pyramid’s profits, and soon, other companies came calling. 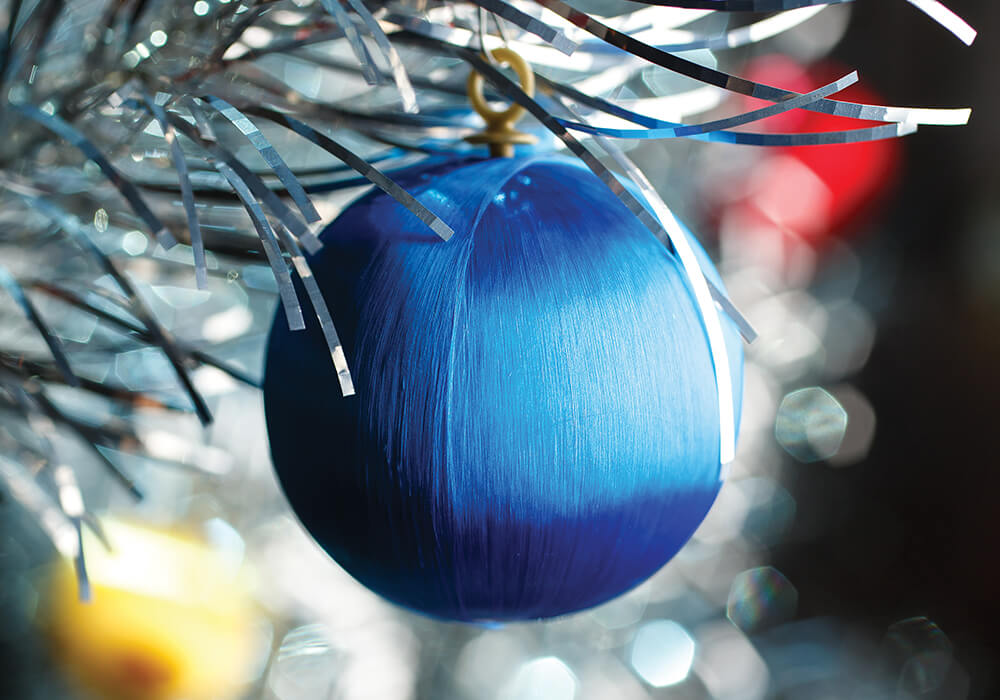 Rauch not only figured out how to wrap an ornament in satin thread, but he also patented the process, too. photograph by Jerry Wolford & Scott Muthersbaugh

“By December, we knew what we had,” Rauch says. Within two years, he’d patented the process to wrap the balls. The timing was perfect: Aluminum Christmas trees were in vogue, and the rotating color wheel that lit the tree made glass ornaments appear dull. Satin ones, however, shimmered.

Aluminum Christmas trees were in vogue, and the rotating color wheel that lit the tree made glass ornaments appear dull. Satin ones, however, shimmered.

The company became Rauch Industries in 1965 and steadily grew. Rauch opened showrooms in Atlanta, New York, Charlotte, and California, and a retail outlet in Gastonia. He expanded into glass ornaments, Santa suits, garlands, icicles, and fake snow, which buyers liked, because they could get all of their Christmas merchandise from one company. Once, Rauch’s son Marc sold thousands of custom ornaments to the televangelist Jim Bakker for $1.50 each. Two weeks later, Rauch was watching Bakker’s show late one night, and there were his ornaments for sale. He listened to Bakker praise them as beautiful and wonderful, but when the televangelist got to the price, Rauch called his son. “You think you’re a salesman for selling those for a dollar and a half?” Rauch told him. “He’s selling them for $25.”

Rauch made — and gave away — plenty of cash. “If you needed to borrow money for a good cause, you got it,” says Don Walser, a 30-year employee who retired as the company’s chief financial officer. Sometimes that money wasn’t reimbursed as promised. “It bothered me,” Walser says, laughing. “But it didn’t bother him.”

That wasn’t Rauch’s style. He didn’t scold or judge. He liked to stroll around the floor of his factories, chatting up his 1,300 employees, trying to learn each of their names. He endeared himself to those he met with his love of jokes. Double entendres were a favorite: He once printed up T-shirts that read, “Deck your halls with Rauch balls.”

At one point, Rauch’s factories were making a million ornaments a day. They also were breaking 40,000 each day. He tried, futilely, to sell the shards to municipalities to put in asphalt to make roads more reflective. He also tried a line of Hanukkah ornaments. They, too, were unsuccessful.

But everything else seemed to work. Rauch became the world’s largest manufacturer of glass and satin ornaments, and his products were sold in every big chain store in the country. “It’s kind of a risky business,” Walser says. The company would design and crank out ornaments on spec year-round, long before the seasonal orders came in. The orders always came in. “We didn’t have any downtime,” Walser says.

Until the mid-1990s, they also didn’t have any serious competitors. By the time Rauch sold his company to Syratech in 1995 for $51 million, the Christmas ornament industry had already started moving to China, and there hasn’t been any mass production in the United States in more than a decade. A remnant of Rauch Industries still exists today, mostly as an ornament designer and importer based in Gastonia.

You could just stop here, and be satisfied with the delightfully improbable story of a man of one religion being so deeply intertwined with the tradition of another. You could chuckle at the jokes, or smile at the anecdotes, or think of his shiny ornaments adorning your twinkling Christmas tree. But to do that would be to ignore the greater half of Marshall Rauch’s life — the part where he made North Carolina more tolerant of religion. All religions.

“Faith?” Rauch says, pausing for a while, his face becoming serious. “It’s everything to me.”

At one point, Rauch’s factories were making a million ornaments a day.

Marshall Rauch was born on Long Island, went to Duke University and played basketball for Eddie Cameron, and then left college to join the Army, where he earned a Bronze Star and a Combat Infantry Badge during World War II. Afterward he and his late wife, Jeanne, whom he met at Duke, moved to Gastonia, where her family had offered him a job in one of their textile plants. By the mid-1950s, Rauch owned Pyramid Mills, which made kite string and crochet thread long before ornaments. Back then, Gastonia had a thriving Jewish temple, but being a member didn’t automatically unlock doors. “I’ve been the first Jew at a lot of places,” he says.

Rauch was the first and only Jewish president of his local YMCA, and he’d always thought Gastonia needed more recreational facilities. So in 1952, he ran for city council. “I was 29 years old. New York. Jewish. I got elected,” he says. Rauch left city council after one term because he wanted to focus on making his business successful. Once he achieved that, he returned to the council for another two terms. He was chairman of the committee that helped integrate Gastonia’s restaurants, swimming pools, hotels, and motels, and as such, he had overwhelming support from the black community. In the heavily African-American Highland neighborhood, he won handily. Rauch remembers the precinct chairman telling him that he didn’t get all the votes. “You know there are some white people who live in our section?” the man joked.

It wasn’t all smooth sailing. At first, Rauch wasn’t allowed to join the Eagles Club, and wasn’t asked to come back to a second meeting with the Young Presidents Club for successful business owners. He tried to buy a lot on a nice side of Gastonia, and was told by the seller that he didn’t deal with “Greeks or Jews.” One of Rauch’s friends offered to buy the lot for him, but Rauch declined the offer. Later in life, Rauch would bump into the seller at the country club. “I’m so glad to see you, buddy! Take care of yourself,” Rauch would say half of the time. The other half, he would glare at the man and scowl. “He never knew what I was thinking,” Rauch says with a slight smile.

In 1967, when a seat opened up in the North Carolina Senate, he ran against three lawyers and won. And so started a 24-year run in the General Assembly, a place where Rauch had never before set foot. He eventually became the chair of the powerful Finance Committee. With his fellow Democrats, Rauch steadily increased spending for schools and mental health services. He also was able to slickly maneuver on social issues. As the state rewrote its tax laws concerning alcohol, Rauch inserted a provision that would prevent private clubs from getting liquor licenses if they discriminated on the basis of religion. “There were no Jews in country clubs in North Carolina up to that time,” he says, starting to laugh. “Now, they’re in all of them!”

Rauch always wore a white shirt and a sharp dark suit in the days of the white patent leather “Full Cleveland” look. He wasn’t perfect, or a saint, says Jack Betts, a longtime associate editor of The Charlotte Observer, but Rauch was well respected: “He was one of the lions running the senate.” His fellow senators helped him pass a bill to recognize Yom Kippur as a holiday in North Carolina. It came with some gentle ribbing. A colleague, who’d rescued the bill from dying in committee, turned to a genuinely touched Rauch and said, “Senator, now do you believe in the resurrection?”

Rauch left the state senate in 1990, and retired in 1998. But that doesn’t mean he stopped working. The phone constantly rings at his office on Union Road in Gastonia. He works there on investments with his grandson Julian, the former Appalachian State placekicker who made the game-winning field goal in the Mountaineers’ legendary 2007 upset of Michigan. Rauch stays in town because he likes it here. He tried Florida, but lasted a month.

Up the street, at Ole Carolina Barbecue, Rauch stops in for a salad and some chicken (no pork), and everyone knows his name, from the goateed men in ties to sheriff’s deputies to waitresses. He works out several times a week and still drives. He’s always got a smile and a joke. But he never jokes about his faith. He’s not driven by it, he says. But it’s the cornerstone of who he is. “Some of your friends driven by ego, they ain’t worth a damn,” he says. Same with those driven by greed and sex. “That leaves faith and fear. And if you fear God — and you should — and you have faith, then that’s what it’s all about.”

Rauch has one more story to tell: Years ago, his temple had a problem. A number of members had married gentiles, but under Jewish law, they couldn’t be buried together in the temple’s cemetery. To open up a separate section to accommodate them, the temple would need a quarter-acre of land owned by Duke Power. So Rauch called up then-CEO Bill Lee to ask if he could buy it. No, Lee said. I’ll give it to you instead.

Rauch leans forward on his desk. “You just keep your reputation right and do things right,” he says. “Things will come to you that will surprise you.”