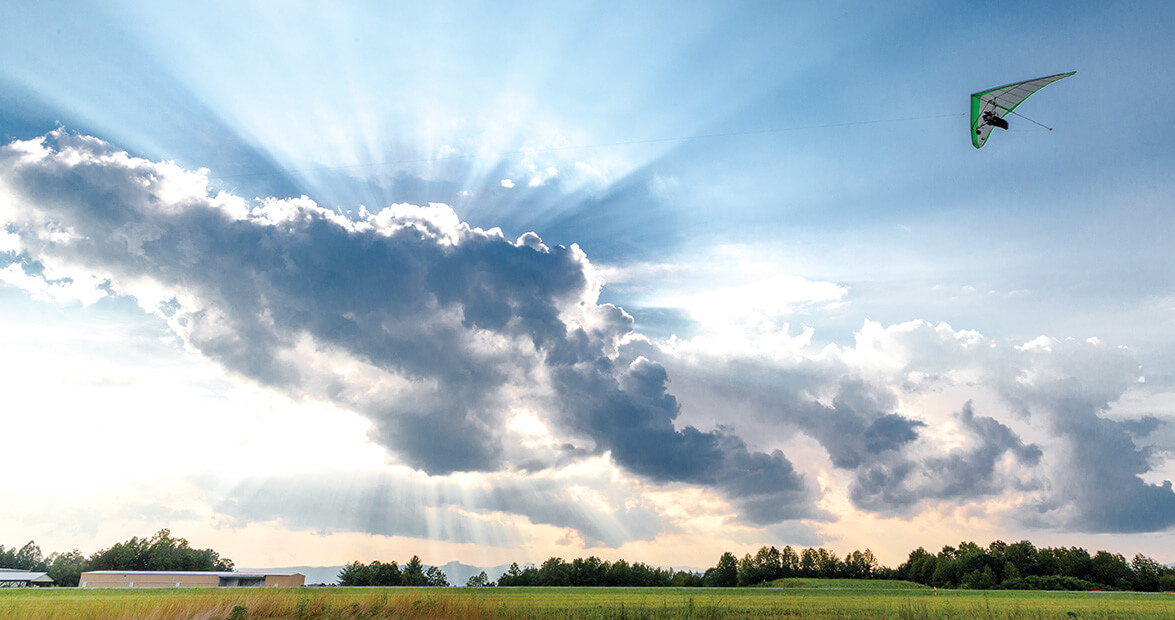 Seven minutes or so after I’ve agreed to be tethered to an airplane and towed into the sky, the rope releases. The hang glider bucks. The horizon, Blue Ridge against bluer sky, bounces. The plane spirals noiselessly out of sight. I have committed myself to the wind.

The jolt should be enough to return the real-world consciousness I left behind on ascent: when it transpired that I — not Table Rock mountain — was soaring heavenward.

Instead, this is a tiny tremor, a tap on the shoulder to say that you have now traded the man-made power of a plane for the much grander rules of the universe. The atmosphere is in charge, the same unseen thermal bands that lift the hawk and falcon. I’m no longer a spectator, but an accomplice to the air.

Mellow foothills charm a driver headed to Thermal Valley, and distract from the thrill ride that awaits at this hang-gliding operation between the towns of Lenoir and Morganton.

A two-lane road winds in lazy curves toward an airstrip veiled in rolling green terrain. It’s the kind of out-in-the-country setting where directions invariably include Antioch Road or Antioch Baptist Church. Out beyond the closed fish camp whose fried flounder used to beckon my family from 30 miles away.

The scene doesn’t square with the tall tale I spun to impress a 4-year-old. Hang gliding, I told him, is how human beings transform into birds. Hang gliders, I whispered, grow long, wide wings to harness the wind. To gravity, the invisible force that keeps our shoes stuck to the ground, they say, “Not today.” 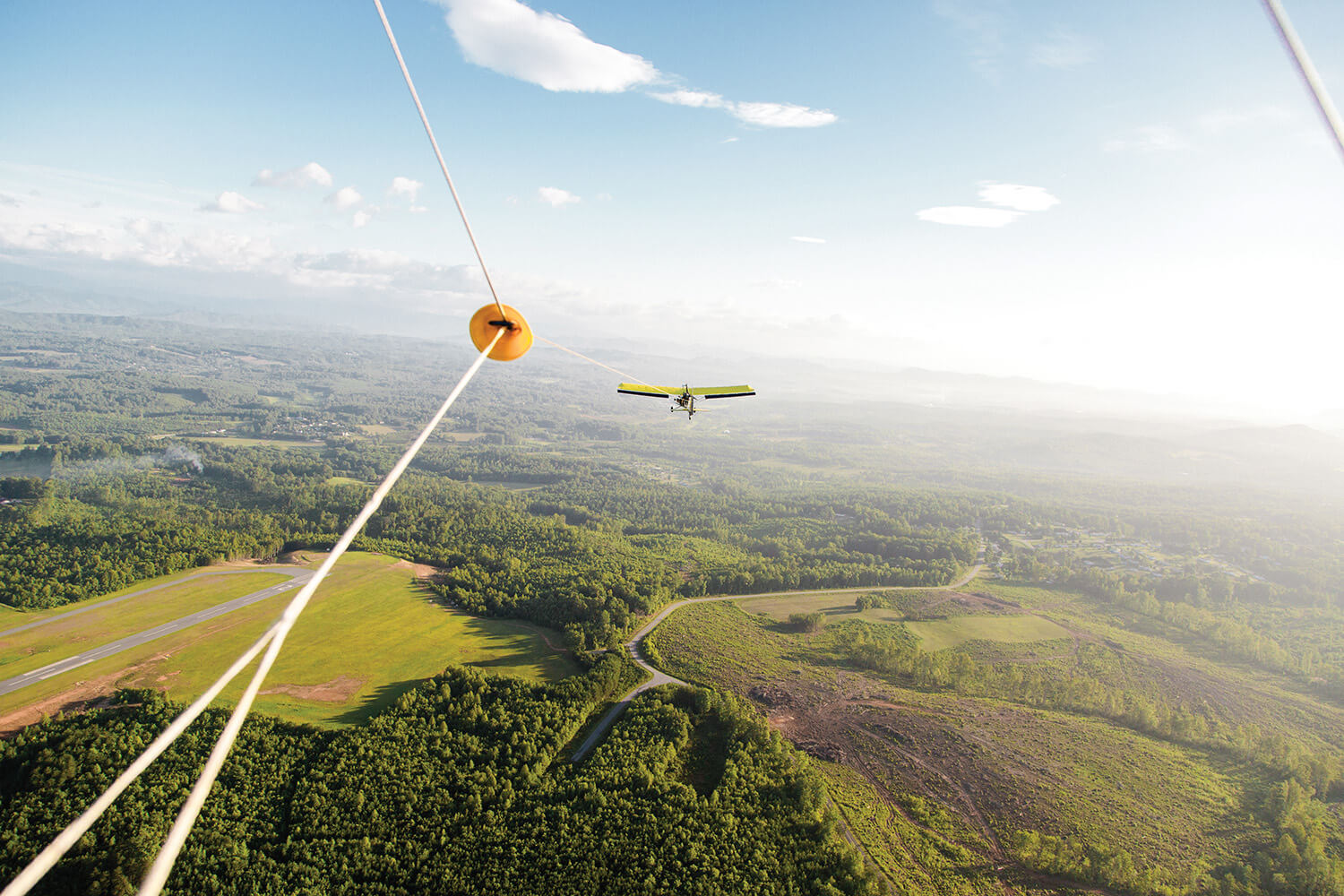 A lightplane pulls the hang glider to the proper altitude. When the line is detached, it’s just the wind, and you. photograph by logan cyrus

For nearly half of each Thermal Valley flight, the hang glider floats behind the plane. From the ground, it looks like an oversize, yellow-green luna moth.

Then Larry throttles down. The call of the plane’s engine evaporates, replaced by the whoops of free-flying passengers who are high enough to be invisible from the ground Craig prompts his passengers to holler when people are below. Make sure they hear, he says. But he doesn’t need to. The howl that escapes my lungs is the only appropriate response to flying eye level with a distant Grandfather Mountain, to watching the Catawba River recast as a shining silver ribbon. Even the dirt track of Antioch Speedway, its race cars now Matchbox scale, looks postcard-picturesque from up here.

Wind blasts my ears with a wild bass pitch I feel as much as hear. Against the thunderous soundtrack scrolls a slow-motion panorama, floating by as if I were dreaming. Groves of pines and hardwoods, impenetrable from the ground, become pinstripes, windrows of the gods. We drift on pace with clouds, their filigree edges dipped in pink sunset. And could we truly have risen high enough to see the curve in the earth on this emerald-meets-indigo horizon?

Over the wind’s roar, Craig shouts instructions on how to control the craft. Hands on the bars. The slightest push or tug, and the hang glider either slows, nearly stalls, or hurls itself through the air. Skyscraper-turned-matchstick trees blur with the speed.

To change direction? Look over your shoulder, Craig advises. A glance left or right and the hang glider, reacting to redistribution of your body weight, changes course. Wherever you look, your new friend, the air, will take you. 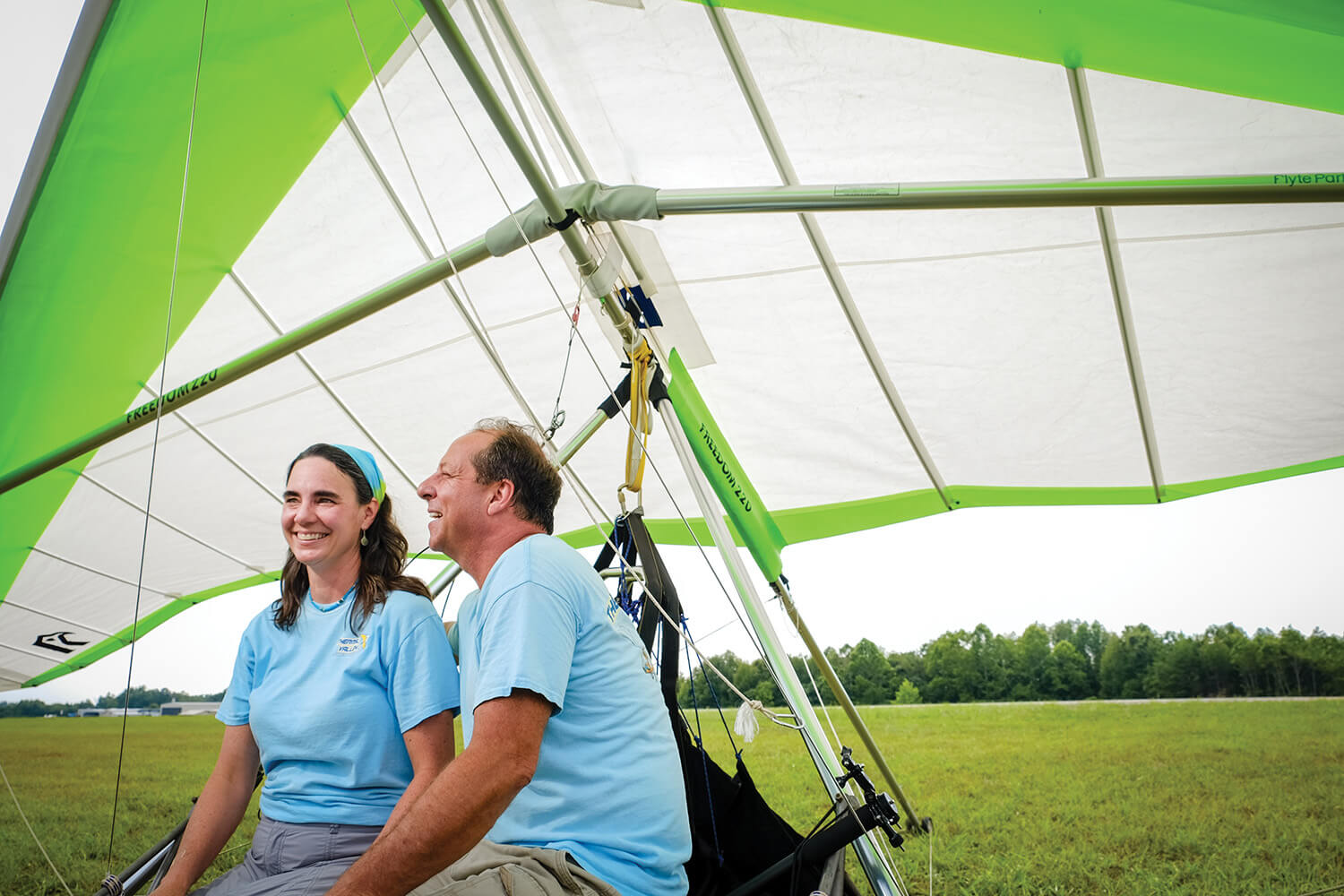 Thermal Valley owners (as well as husband and wife) Craig and Laura Pearson catch a breath beneath a glider’s wings. photograph by logan cyrus

Craig wants to know, suddenly, if I like roller coasters.

Strange question, I think, before he adjusts the bars, turns his head — seriously, a turn of the head — and sets in motion a dizzying, descending spiral.

The wind shrieks farewell, and the river turns back into the wide Catawba as we plummet toward it. Trees grow taller by the second.

A bump of the hang glider’s wheels, and gravity is back to hold shaky legs to the grassy runway. The jolt should be enough to snap me into the real-world consciousness I left somewhere on this runway.

And I say a silent thank-you to the Grandfather looking down on us that it’s not.