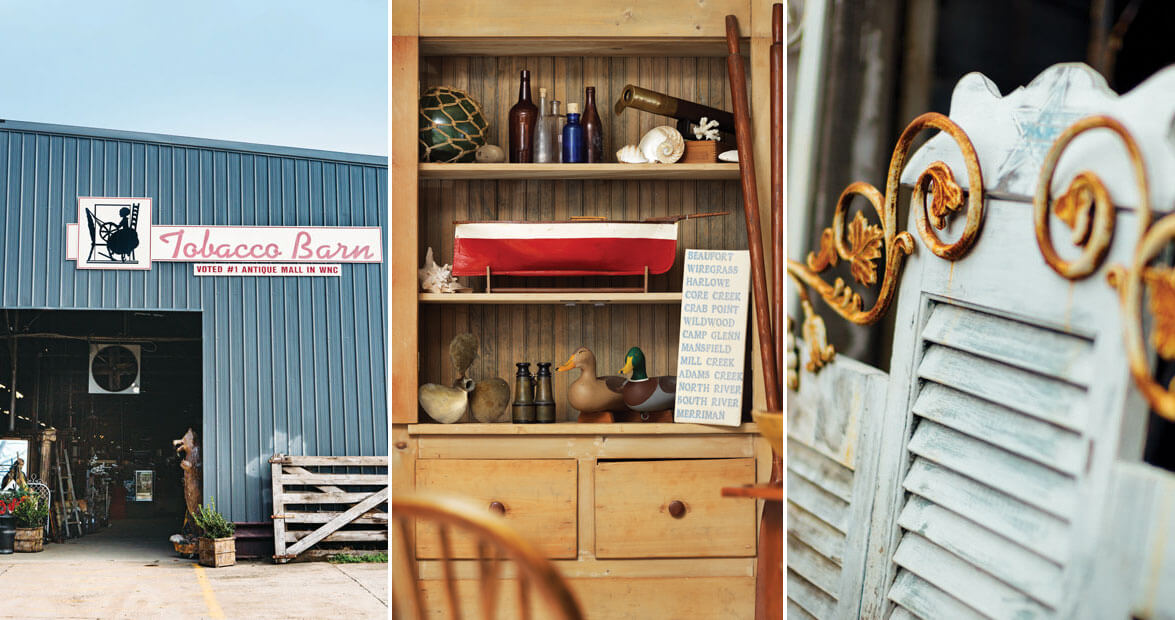 It’s in there. It’s bound to be. A bicycle with a banana seat.

Though, come to think of it, the bike might not be for sale, as employees use them to tool around the 77,000 square feet of … stuff in the Antique Tobacco Barn.

“Barn” doesn’t quite do the building justice. You need wheels — maybe roller skates — and even a flashlight, to appreciate this repurposed tobacco-auction warehouse larger than a football field. It also helps to know what you’re looking for. Or not.

The guy pawing through a table of — well, what are those dark wooden things? Planers, as it turns out, in every size. He wants the perfect one for a bookend.

Mantels, iron mermaids. John Deere stools, cowhide footrests. Commemorative plates to champagne flutes, and every kind of china in between. Scotch coolers to chandeliers. A turkey made of old license plates, and a Big Boy head from a Shoney’s restaurant. Stained glass and wooden spools.

Never underestimate the power of nostalgia, the seduction of collecting. You can spot the veterans. They know what they’re doing. They’re focused shoppers. Shopping, though, is what you do at Target. This is a different experience. Wandering. Browsing. Trying to figure out what something is, and why someone would want a life-size ostrich. 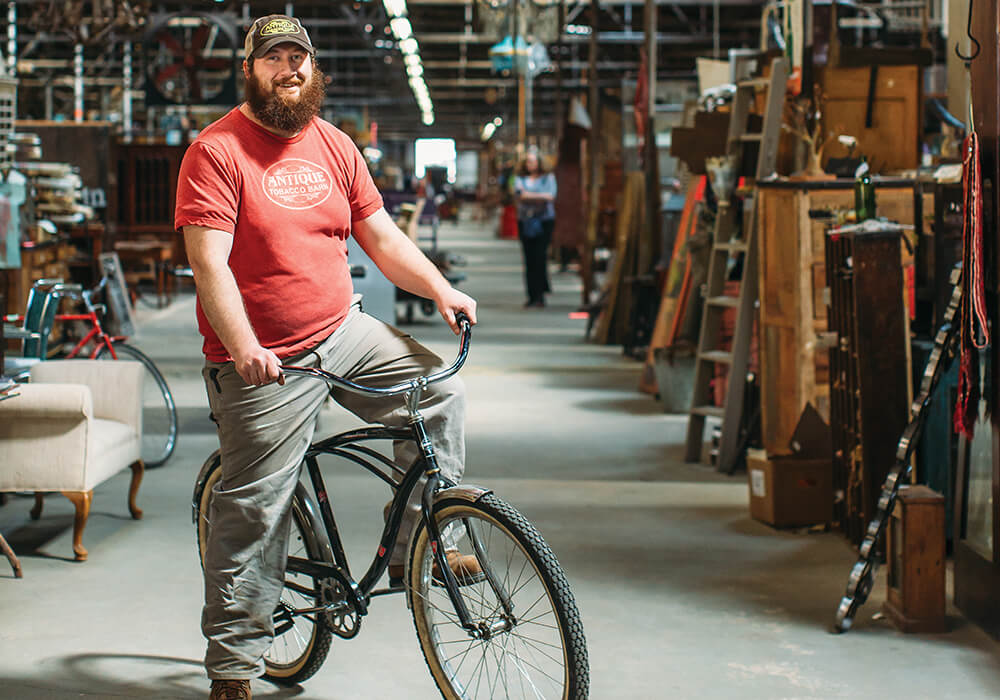 Need help reaching an upper shelf? Assistant Manager Blake Peele will pedal over on his bike to assist you. photograph by Tim Robison

Podiums and quilts and dough trays five feet long. Milk glass and milk crates and boots and bowls and buckets that held lard. (How do I know? The label says so.) Barn doors, church doors; chests and desks. Plus books and books and books.

When it’s time to check out, you can easily find the cashiers. They stand on a raised platform so you can distinguish them from the 120 vendor spaces.

Assistant Manager Blake Peele figures the most expensive item ever sold was a suite of Civil War-era furniture. But the price range for the … stuff is wide: “One dollar to thousands,” he says.

Do buyers ever just bring their lunch and stay the day? “Every so often,” Peele grins. “The ones who’ve been here before.”

The American Medical Association may not recognize the term, but Sombrero Syndrome is nevertheless a malady. Visit Mexico — come home with a sombrero. It’s a compulsion.

Likewise, visit SuzAnna’s Antiques in Raleigh, and come home with, in my case, a set of glasses with playing cards on them, a toy tambourine, and an old ecru linen pillowcase stitched with a little girl holding a bouquet. I still regret leaving behind the clip-on mink bow tie. Next week, it won’t be there.

What do we look like? Anything tobacco-related. Wooden crates with brand names on the sides. Ball and Mason jars — especially the blue ones — and old doors. Doors to make tables and bars and headboards and to replace soulless spec-house doors.

Named for Foster and her best friend, Anna, SuzAnna’s falls between a Pinterest devotee’s dream and the realm of “I declare.” As in, “I declare, my grandmother had a pancake spatula just like that.” 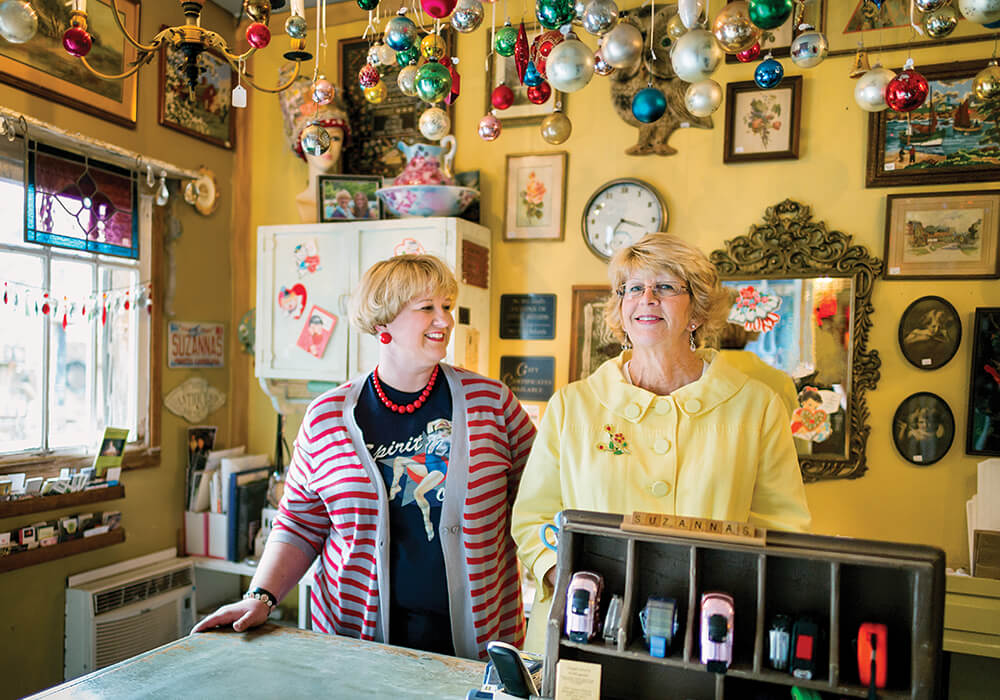 Lose yourself for an afternoon at SuzAnna’s, co-owned by Jenny Sellars (left) and Suzie Foster. And those Scrabble tiles at the front desk? Worth 17 points, more if you land on the Triple Word Score. photograph by Charles Harris

Set designers comb SuzAnna’s for props for movies such as The Hunger Games. Stagers for photography shoots understandably love the place. Never mind brides, who, with rustic weddings so popular, also seek out Mason jars to hold a signature drink, or candles, or flowers. Then there are the collectors. “Looking for painted egg platter/plate,” reads a handwritten entry in one of three Wish Books kept at the front desk by the mother/daughter team of Susie and co-owner Jenny Sellars.

The front desk sits below a ceiling of suspended Christmas ornaments, fragile orbs in various sizes and colors, from frosted to reflective finishes. Sellars discovered a woman crying at the desk last Christmas. The woman’s mother had recently died, and one of the decorations was precisely like one she’d always hung on their Christmas tree. Sellars gave her the ornament, no charge, because customers become friends at SuzAnna’s.

People come to SuzAnna’s for inspiration, Foster says. “They find their center here.” Or they may visit to hear the sound of the rain on the tin roof, or the whistle from a train on the nearby tracks. A local play was held here every evening for two weeks. One customer wanted to have her bridal shower here.

A five-foot-high shelf filled with the instantly recognizable slender gilt spines of Little Golden Books is comforting. (“We sell at least four a day,” Sellars says.) Overhead, empty picture frames dangle from the ceiling. Hatboxes and old suitcases, Raggedy Ann dolls and a box of awkward family photos (who are these people?), water skis and sheet music together create a heartening backdrop.

You need those piglet salt-and-pepper shakers. Probably should take these old maps to use as place mats, too, that commemorative platter from a defunct bank in Burlington, and, what the heck, a few faceted glass doorknobs and chandelier prisms to pile in a bowl as a centerpiece. Voilà, y’all: the North Carolina Tabletop Collection. Spoon up the ’cue. Supper’s served.

Long ago, people preferred smaller things. At Seaport Antiques, a glance inside a glass cabinet filled with sterling silver serving spoons will confirm this theory. The pretty spoon looks like a jelly spoon, not like a shovel for dishing up squash casserole. Portions were smaller. Fingers were smaller, too: Check out the size of those political campaign pens. Heads, as well: The helmets and hats for sale are undersized.

I’m not sure about these antique snowshoes, though.

Families visit their military sons and daughters down the road at the Marine Corps Air Station, Cherry Point, and they are looking for usable, not necessarily antique, furniture. “People come for the fishing tournaments and decoy festival, and their spouses come in, looking to fill Christmas lists. One lady collects reels,” says Nell Thompson, Seaport Antiques’ owner for 25 years.

I would so buy The Beach Boys and Steppenwolf and The Pretenders albums, just to frame the familiar, dearly remembered covers. The Lance cracker jar — the sort that once sat on country-store countertops — would hold a lot of wine corks. 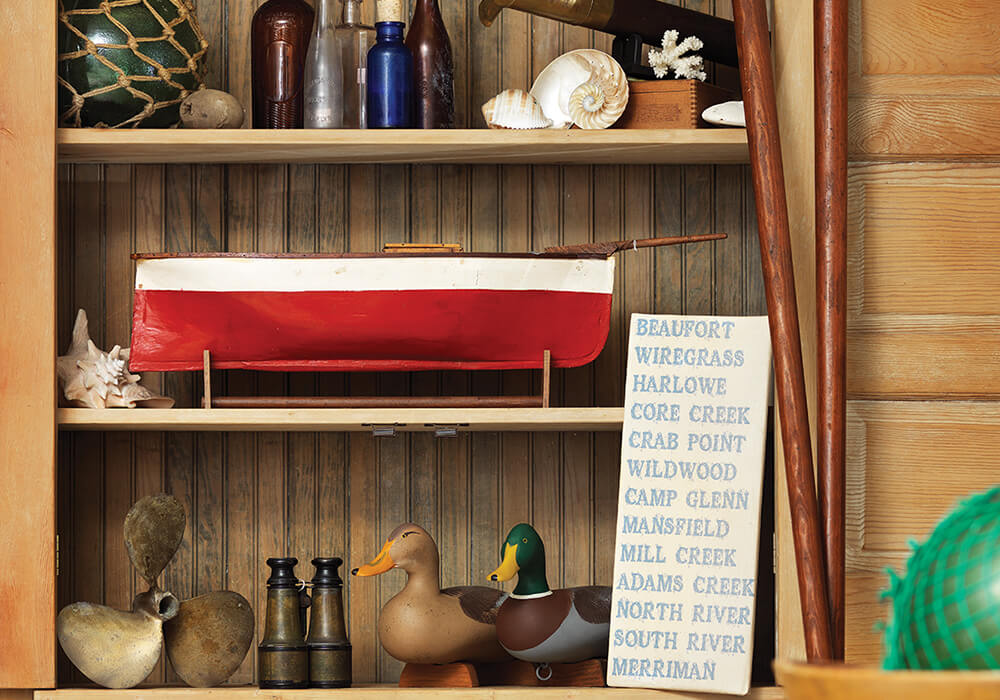 At Seaport Antiques, you can decorate your house with mementos of life on the coast. photograph by Mike Basher

Nearly every one of the 40 consignment booths contains an animal of some kind: porcelain, stuffed, or glass, in case you’re staging Tennessee Williams’s The Glass Menagerie — Scottie dogs and bulldogs and beagles.

Toy collectors should be beating a path toward the sea. Here’s a child’s book with the intriguing title Abe Lincoln Gets His Chance. (Chance to do what, walk 14 miles through the snow to school?) And Tinkertoys, in their original, cylindrical container. A jar of marbles, more beautiful than sea glass. But oh, the prize: a Schlitz beer can bank, which I once owned. However, I never had a “hang-head doll” a term my daughter coined for the heavy-headed, life-size, old-fashioned dolls she loved.

This is what crossword puzzle fans call an “olio”: “a miscellaneous collection of things.” Sideboards and desks and desks. National Geographic magazines bound by the dozen. For reading, sure, but also, as a friend did, for decorating, turning hundreds of the distinctive yellow spines outward to dramatically fill bookshelves.

Everyone collects something. “Anything from the Civil War or the Revolutionary War?” a browser is asking. She studies a Civil War-era prosthetic wooden leg, complete with stiff foot and leather straps and buckles, then moves away, adding, “or World War II?” The Hitler pincushion, featuring the dictator stooping, with a pale-pink velvet pillow where his rump should be, would probably count.