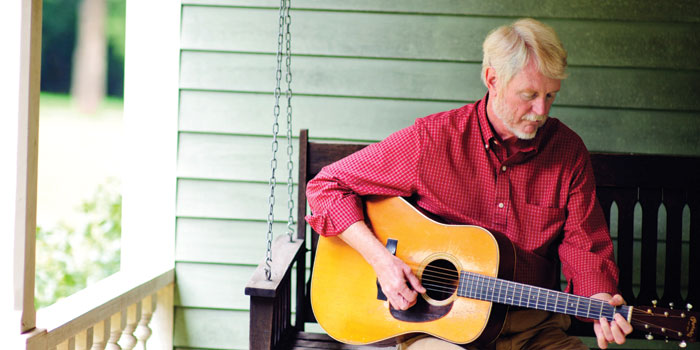 When Tommy Edwards was growing up in Siler City, more than 50 years ago, he noticed one day that his neighbors had a guitar in the trash. To this day, Edwards doesn’t know why. It was a nice guitar, a Gibson, and Edwards fished it out. He went to the drugstore and bought some Black Diamond strings. His daddy taught him three chords.

That old guitar is long gone. But ever since that day, Tommy Edwards’s life has had a tune to it.

But his solo career is just a piece of the platter. Last year, Edwards, 66, celebrated the 40th anniversary of his main band, the Bluegrass Experience. He’s in a second band called Carolina Lightning. He sits in on banjo sometimes with his friend Leroy Savage. He has played shows and festivals all over the country and halfway around the world.

“Tommy has the kind of talent that leaves me standing with slack-jawed wonder,” sociologist and writer John Shelton Reed says in the liner notes of the CD.

“There’s just so much out there, and I’ve still got so much to learn,” Edwards says. “I plan to just keep trying new things, keep learning, trying to get better.”

As a teenager, Edwards caught the beginnings of the folk revival of the late ’50s and early ’60s — bands like the Kingston Trio, and Peter, Paul and Mary. But he also watched “The Flatt & Scruggs Show” on TV. Earl Scruggs, the banjo genius from Cleveland County, mastered the three-finger roll so well that it became the default style for bluegrass players. The same episode came on twice a week, and Edwards watched it both times. Then he picked up his guitar and tried to play what he heard. He never took a lesson.

“Bluegrass had that stigma, even back then, of being a fringe sort of music,” he says. “I had an aunt, she’d ask me to play the theme from ‘Dr. Zhivago.’ She thought that was real music. But I kept coming back to bluegrass.”

After going to college at East Carolina University, he came back to Siler City and joined a weekly get-together with local bluegrass players. Eventually, he cofounded the Bluegrass Experience in 1971, and the next year, the group won the World’s Championship Bluegrass Band title at the Union Grove fiddlers’ convention. For nine years, the band played a regular Thursday-night gig at Cat’s Cradle in Carrboro.

(In case you’ve read this far and haven’t figured it out, this Tommy Edwards is not the R & B singer Tommy Edwards, best known for his hit “It’s All In the Game.”)

Edwards has lived in North Carolina almost his whole life, and at some point, he started thinking about all the songs set in the state. His old favorite, the Kingston Trio, had a huge hit in 1958 with “Tom Dooley,” based on the story of Tom Dula, the former Confederate soldier who was hanged in Statesville for killing Laura Foster, his lover. Another murder ballad called “Poor Ellen Smith” tells the tale of a killing in Winston-Salem in the 1890s. But the songs aren’t all about death and dying; there’s everything from “Black Mountain Rag” (made famous by Doc Watson) to “My Cabin in Caroline” (written by — the circle comes back around — Flatt & Scruggs).

Edwards picked seven of his favorites for his History, Mystery, Lore & More CD, then added six of his own compositions — including “Holy Smoke,” written to go with John Shelton Reed’s barbecue book of the same name.

What’s that cookin’ on those coals
Why it’s a pig, Lord bless my soul …

Edwards is already thinking about a second volume of North Carolina songs. For him, the hardest part is squeezing the stories he knows into a three-minute tune: “Sometimes, there’s just a lot more story that you want to tell,” he says.

Edwards’s own life is sort of like that. He taught and coached in Chatham County and Randolph County schools for more than 30 years. He and his wife, Cindy, have a store in Pittsboro called Red Gate Music, Art and Antiques. They’re experts on North Carolina pottery — Edwards fell in love with it as a boy when his mother took him to Jugtown Pottery in Seagrove. And he has a radio show (Saturday nights from 7 p.m. to 9 p.m. on WLHC-FM out of Sanford) where he plays the bluegrass he learned growing up and some of the best new stuff.

But his favorite thing, still, is playing live. Ask him about his favorite concert moments, and he remembers a tour in Finland 35 years ago when the banjo player went home early; it turned out to be hard to find another banjo in Finland. But it’s not hard now. The music he loves is everywhere.

That old guitar, picked out of the trash, has taken Tommy Edwards a long way. 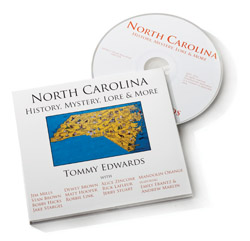 If you ever had to drive across North Carolina — from Murphy to Manteo, as we always say — you could make a fine mix tape of North Carolina music to get you there: James Taylor to Nina Simone, Doc Watson to Jodeci.

Or you could just put this new Tommy Edwards bluegrass CD on a loop, and it would get you there just fine.

North Carolina: History, Mystery, Lore & More is not just music by a native Tar Heel; all the songs are about the state in one way or another. Edwards grounds you in North Carolina from the first lines of his composition “Midnight Run,” about the old Silver Meteor train: When I was just a little boy way back in Caroline / I remember that the railroad cut a pathway through the pines …

Edwards wrote six of the record’s 13 songs, touching on Carolina legends like the “Devil’s Tramping Ground” in Chatham County and “The Ghost Light of Maco Station” in Brunswick County. He also finds freshness in tunes as old as “Tom Dula” (better known as “Tom Dooley”), based on the true story of a man who killed his ex-lover and was executed in Statesville in 1868.

Edwards’s warm voice and tasteful, low-string guitar picking pull you through the songs, and he gets help from a bunch of friends, especially banjo player Jim Mills (on Flatt & Scruggs’s “My Cabin in Caroline”). Even if you’re just listening at home, it’s a fine trip through our state.

Tommy Tomlinson is a columnist for The Charlotte Observer and was a finalist for the Pulitzer Prize in commentary in 2005. Tommy’s most recent story for Our State was “History in a Mason Jar” (August 2011).