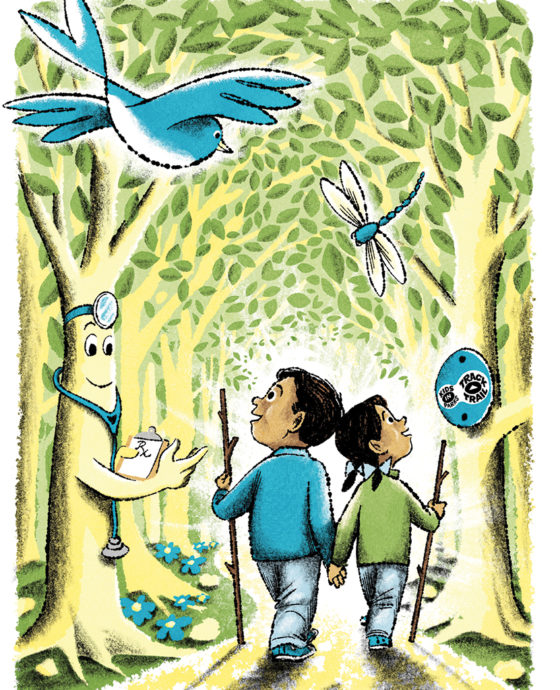 Though sunlight streams in through a window along one wall, the room feels stuffy, a little crowded. There’s the pediatrician, John Moses, the interpreter, Javier Rodriguez, the patient, Iker, and Iker’s mother, brother, and sister. Iker and his siblings fidget. They hold purple latex exam gloves blown up into makeshift balloons.

Moses squints at his screen and swivels back to the family. “You’re a pretty tall guy for your age,” he tells Iker. “Will you be a basketball player?” Sanjuanita laughs. A few of Iker’s cousins received scholarships to play ball. Everyone hopes he inherits their talent. “You’ve got the height,” Moses says.

“What about the weight?” Sanjuanita asks, more seriously. She has been cautioned in the past about Iker’s weight and its trajectory. Moses swivels and squints again. “Your weight’s improved,” he says to Iker, pointing to a constellation-like chart on the screen. He explains that the dots in the graph suggest Iker’s body mass index is moving into a healthy range. Sanjuanita sighs in relief.

It’s a typical “well-child” visit at the Duke Children’s Primary Care clinic: Inquire about school, monitor weight, consider basketball. But then, something quite unusual happens.

“I’m going to give this prescription to you,” Moses says, handing Sanjuanita a brochure for Kids in Parks TRACK Trails, which includes a map of the Piedmont’s nature preserves. Then, he pulls out a prescription pad with a watermark of mountains and a river, part of a new program called TRACK Trails Rx. In a space labeled “Recommended Dosage,” he writes that Iker and his family are to spend time in nature at least twice a week this summer, for their health and for Iker’s development. Written on the back are directions for how to record — online — the fulfillment of the prescription. Iker will receive a small prize for each new park he visits.

More and more doctors in North Carolina are prescribing time outdoors just as they would prescribe medicine. Scientists have found that when people spend time in safe, natural settings, their blood pressure drops, their mood improves, and a host of other beneficial changes take place in the body, including possible immune system benefits. We don’t know precisely how a good dose of exercise in fresh air can work all of these wonders — just that we don’t see the same benefits when we stay inside. Now, doctors like Moses are hopeful that these effects can fill in the gap between where interventionist medicine ends and preventative medicine begins.

This isn’t the first time doctors in North Carolina have turned to the great outdoors for healing. In some ways, Asheville owes its existence as an outdoors destination to the belief in the 19th century that high-altitude natural environments would be curative for the “white plague,” tuberculosis. Around the turn of the century, Asheville had more than 130 boardinghouses, sanatoriums, and hospitals dedicated to treating Mycobacterium tuberculosis infections.

By some reports, the high density of pulmonologists first attracted the Vanderbilts to western North Carolina, where they would later build Biltmore Estate. More recently, wilderness therapy programs have offered treatment for addiction and behavioral problems through outdoor adventures across the Blue Ridge region.

Doctors are prescribing time outdoors just as they would prescribe medicine.

What’s different now is who is doing the nature recommending: in short, everyone. The Kids in Parks program, run by the Blue Ridge Parkway Foundation, has made it easy for family physicians to connect their patients to local trails. The program has placed colorful TRACK Trail kiosks in many of our state parks, featuring self-guided nature adventures for kids and families. Since rolling out the TRACK Trails Rx program in a documentable form in 2017, Kids in Parks has signed up 148 primary care, family medicine, and pediatric clinics in North Carolina, with an estimated prescriber base of more than 600 physicians and nurses.

Jason Urroz, director of Kids in Parks, attributes the program’s success to a variety of factors, including ease of use for doctors, a massive system of existing TRACK Trails-linked trails, incentives appealing to kids, and the ability for doctors to get automatic reports about patients’ participation. North Carolina’s nature prescribers are part of a growing national movement. According to a 2018 survey by the Institute at the Golden Gate, more than 70 nature prescription programs are active at U.S. medical institutions. An estimated 10 to 15 more have come online since then. Because the average physician can see well over 2,000 patients each year, hundreds of thousands of Americans of all ages could be encouraged to lace up their hiking boots and get outside.

In some ways, North Carolina is at the forefront of this movement. TRACK Trails Rx has especially high participation rates, Urroz says. What’s more, North Carolina is the only state in the country where a health insurer provides a direct financial incentive for clinics to participate in the program. As of early 2018, independent clinics offering TRACK Trails prescriptions receive points that can lead to higher reimbursement-for-service rates. After this plan was announced, Urroz saw requests for the program skyrocket.

“People in this state love our natural resources,” says Kathy Higgins, former CEO of the Blue Cross and Blue Shield of North Carolina Foundation. The foundation has been a longtime funder of Kids in Parks, and Higgins — now CEO of Alliance for a Healthier Generation — helped establish the financial incentives for clinics to try out TRACK Trails Rx. “We have great pride in our parks,” she says. “This is a real opportunity for parents and children to do something healthy that isn’t daunting.”

Daniel Ostrovsky, one of the primary attending physicians at the Duke children’s clinic, is curious to know how Moses’s pitch to Iker’s family went. Ostrovsky, fondly and expediently known as “Dr. O,” brought outdoor prescribing to three Duke clinics. With decades of experience in internal medicine/pediatrics, he understands the complex interplay between environment, habits, and health. Behind his glasses, his eyes sometimes betray exasperation at the indignities visited upon modern health-care workers. (Earlier, he spent 20 minutes — longer than a typical patient exam — trying to get an approval from Medicaid for a CT scan of an infant with an enlarging skull. “I’d like to get this done before he has serious complications,” he said into his phone.) Today, Dr. O has the weary, cautious energy of an innovator stuck midway up a bureaucracy.

“People in this state love our natural resources. We have great pride in our parks.”

He knows something isn’t working in American medicine. Getting folks of all ages outside more often could be part of the solution. What if rates of obesity and depression could be lowered by regular walks in the woods? It’s a question that intrigues Dr. O as much as it does Urroz, the Kids in Parks director.

The two first met at an annual gathering of pediatricians. Ostrovsky was taken with the idea of outdoor prescriptions with prizes attached, so he worked with Urroz to open new, prescription TRACK trails in the parks around the Duke Children’s Primary Care clinics. A grant from the Children’s Miracle Network Hospitals helped fund four new trails linked to the prescribing program.

“As pediatricians, it’s all about prevention,” Ostrovsky says one morning while hiking along the first of his four linked trails. This one meanders through a pine and sweet gum forest in Durham’s Rock Quarry Park. Urroz and a caravan of rambunctious children have scampered ahead, searching for animal tracks on the trail.

“With kids, it’s very little about prescribing medicines or therapy for problems,” Ostrovsky says. “It’s much more about intervening before problems arise.” Regular outdoor play, he says, helps kids develop the good cognitive skills, positive attitude, and general wellness that are the basis of overall health. “I tell people that it’s easier to keep the car running than try to fix it after it’s broken.”

He pauses and smiles as shouts filter through the forest. Urroz has initiated a scavenger hunt for a particular type of pine cone, and the children have scattered to find some. Under the shade of a swaying forest canopy, the collaboration between a pediatrician and an outdoor educator may seem novel and innovative, but, really, it’s inevitable. Here, the air tastes fresh and healthy, as it always has in the woods.