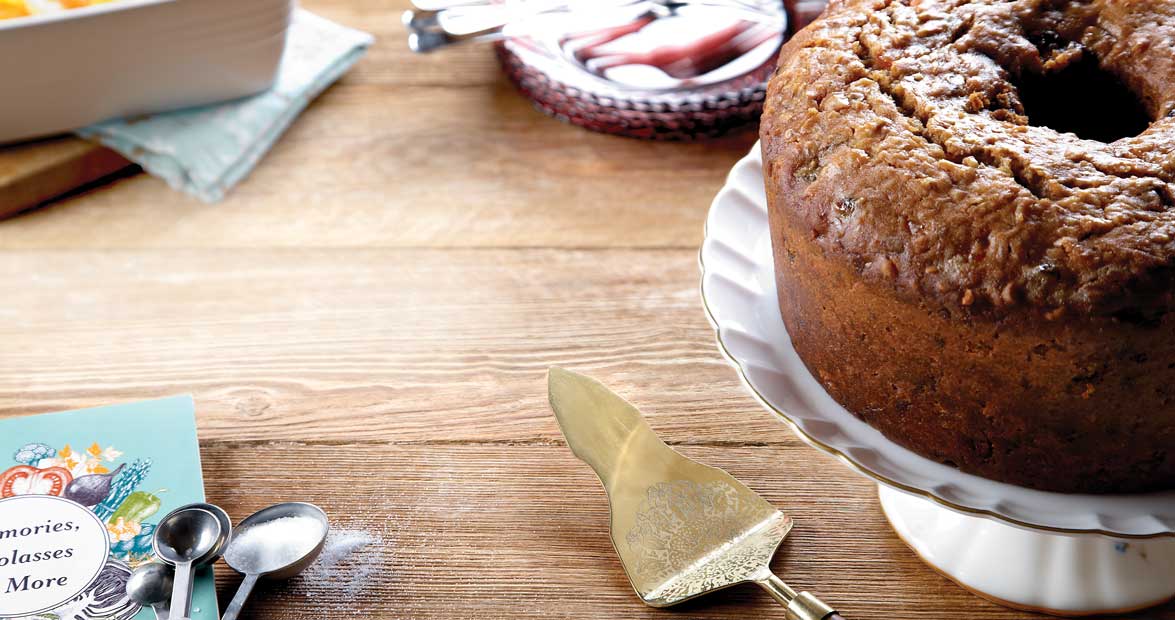 Ann Thompson has been attending Wilmington’s Winter Park Baptist Church for 60 years. She’s 93 now, and even though she hasn’t missed a Sunday at church in a decade, she doesn’t get out to many evening events anymore.

But there was one night that Ann wouldn’t miss: a night of chicken and pastry — eastern North Carolina’s version of chicken and dumplings. A night of sweet potato casserole and “good potato salad” and lots of sweets. It was the night that Winter Park Baptist and Macedonia Missionary Baptist, a historically African-American church, came together for a potluck dinner. The two churches were celebrating the debut of a cookbook, the result of a decade of Macedonia and Winter Park’s partnership in food and fellowship. The project was championed by one of North Carolina’s most beloved writers, Clyde Edgerton, who goes to Winter Park (“I attend twice a month for the hymns,” he admits), and a now-retired fellow UNC Wilmington professor, Deborah Brunson, who attends Macedonia. The two churches had come together, in prayer and on the page.

Memories, Molasses & More, compiled by Peggy Price and edited by Edgerton, Brunson, Stephanie Trott, and Diana Clark, is a slim paperback cookbook published with help from UNC Wilmington. It’s the result of a long collaboration that started about 10 years ago with Winter Park’s former pastor Eric Porterfield and his predecessor, and Macedonia’s pastor, the Rev. Dr. Terry L. Henry. At first, the pastors swapped pulpits every other year or so. Before long, members from both churches were following suit, visiting each other’s worship services and making friends outside the doors of their own respective churches. The Rev. Paul Burgess, Winter Park’s new pastor, and Reverend Henry plan to continue the tradition. 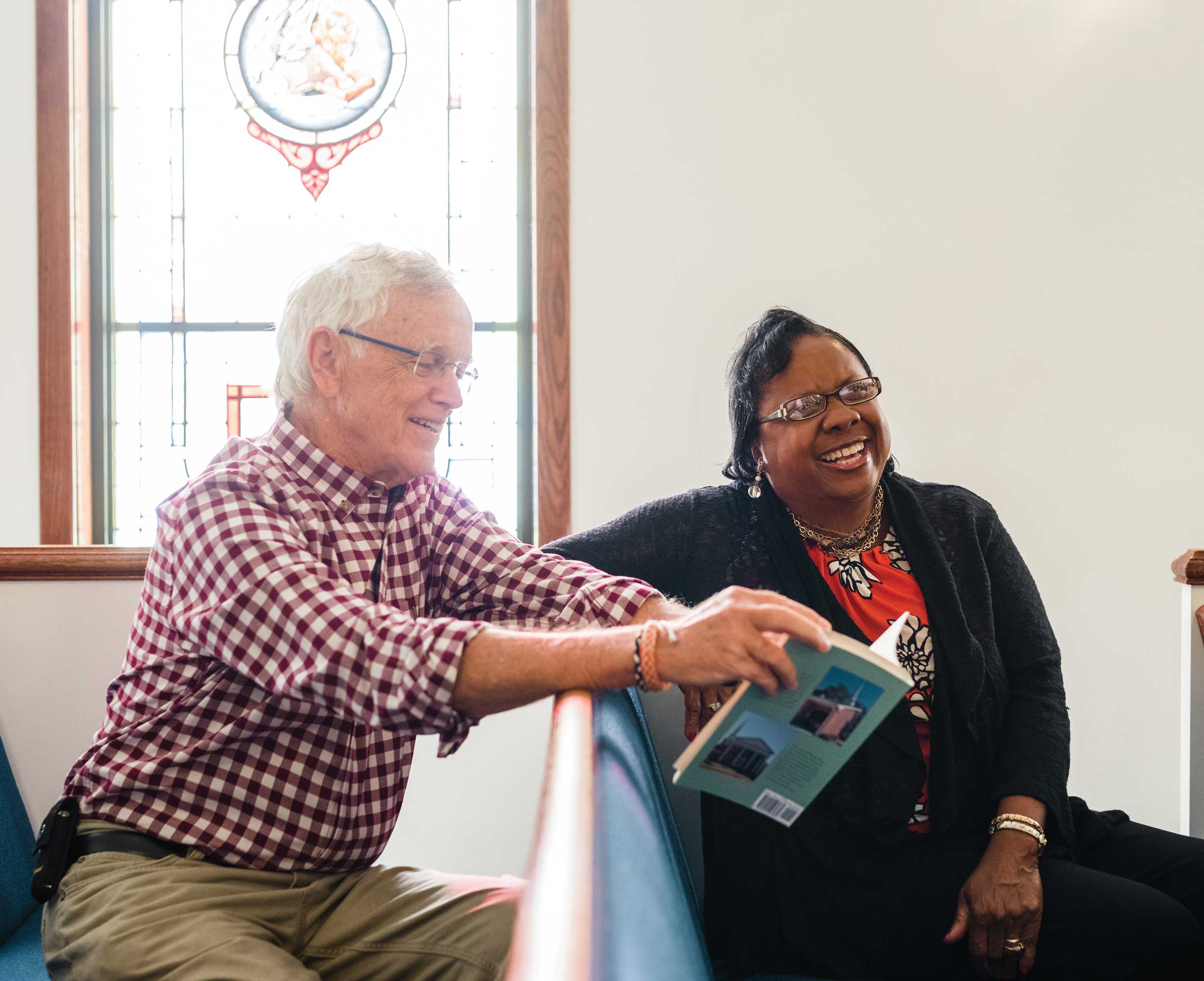 Clyde Edgerton and Deborah Brunson, once colleagues at UNC Wilmington, are also collaborators who helped put together a 108-page collection of recipes and stories. photograph by Baxter Miller

Thompson grew up on a farm in Loris, South Carolina, and came to Wilmington in 1942. During the war, she worked as a welder — yes, she was a Rosie the Riveter — in the shipyard, where she met her late husband.

In the era she grew up in, a black church and a white church wouldn’t have made a concerted effort to merge their respective communities, she says. But getting to know one another has brought more understanding of what everyone has in common, and more acceptance of their histories. Thompson doesn’t think that people would have come together without the pulpit swaps.

“I think Eric Porterfield had a lot to do with it,” she says. “He was a wise man. He realized that God loves us all. We had no conflict with that.”

Edgerton, the author of Raney, Walking Across Egypt, and other novels, was struck by how much the lives of working-class Southerners, both black and white, had in common at the table, despite the divisions of Jim Crow and segregation. “The food we shared had to be very close,” Edgerton says. He started to think, “What if we had a cookbook?”

Brunson and Edgerton decided to make it happen. Working with several volunteers, including Price, they arranged to bring people together to share food and recipes. For the book, they got 11 people from Winter Park and 14 from Macedonia to contribute a recipe (or two) and a story.

Edgerton and Brunson both admit that they were a little nervous about getting the recipes. Edgerton was afraid that all the stories would be too much alike. Initially, Brunson was afraid that people might not part with family recipes — or they might secretly change them, to protect family legacies. But she was delighted by how eager people were to share.

“I had no idea what we were going to get,” Edgerton admits. “It’s powerful because of the stories. I would love the book to be a prototype for any two communities. It’s the missionary in me — my mama wanted me to be a preacher.”

Brunson insists that she’s not much of a cook — her father always cooked the Thanksgiving turkey and the Parker House rolls. But she shared a special Thanksgiving recipe from her mother: macaroni and cheese, a dish that’s revered on holiday tables by many African-American families.

Edgerton shared a recipe from his mother, too — for another dish that’s often different between the two cultures: cornbread. 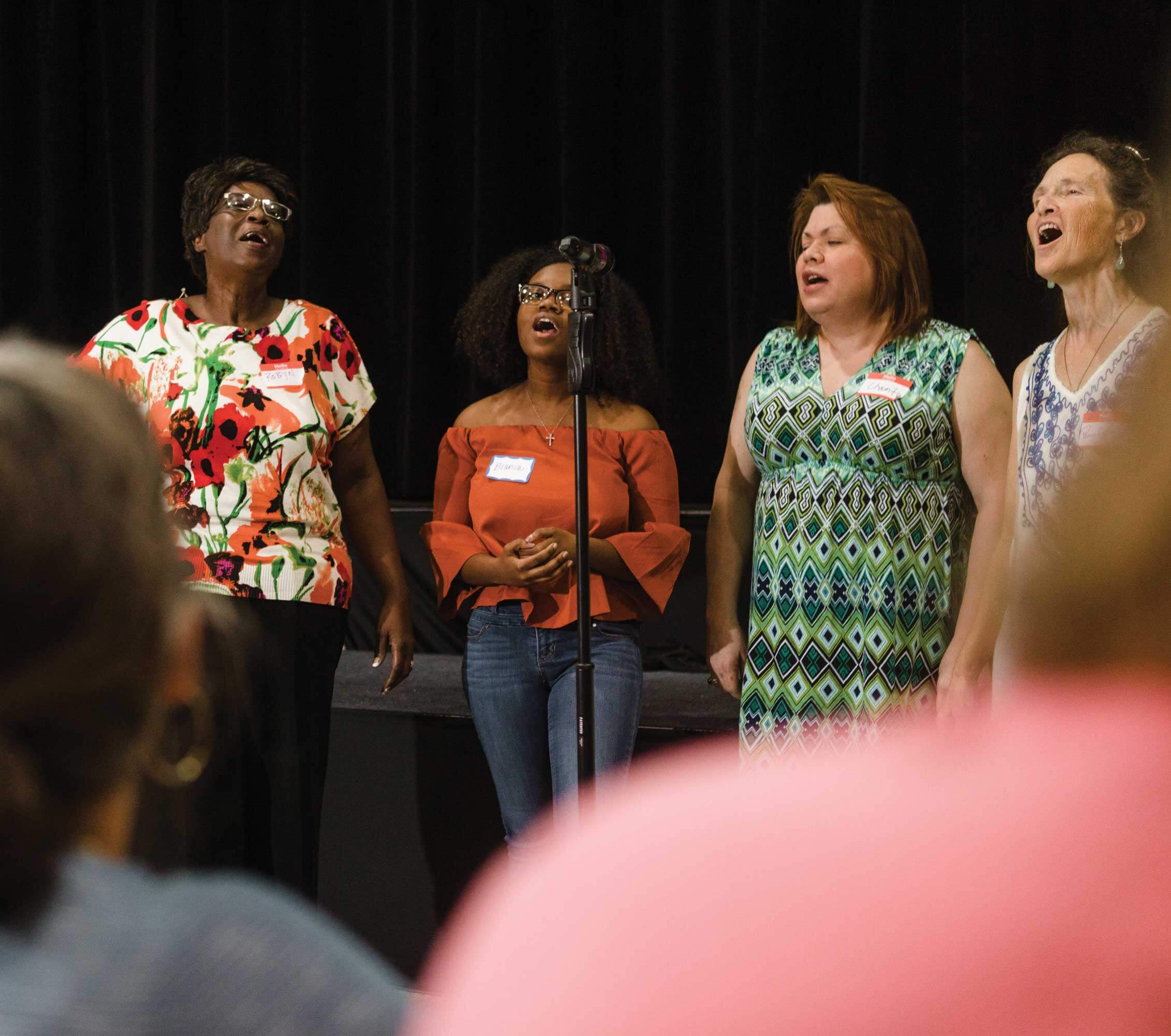 What started with a pulpit swap has grown into a true connection. Now, members of both churches occasionally worship — and sing — together.  photograph by Baxter Miller

Ann Thompson doesn’t bake much anymore, but she did share the recipe and the story of her special orange slice cake for the book. “Living in the country, we had a lot of things, like milk, eggs, butter, and pecans,” she says. “And my mother’s favorite candy was orange slices.”

The two churches got together again at the end of the summer for another potluck with recipes from the book. Edgerton says that the project has given him a new appreciation for how profound something as simple as a recipe can be. “I have a whole new respect for food and the potential of food to bring people of different backgrounds together,” he says. “People have been saying this since the Last Supper.” 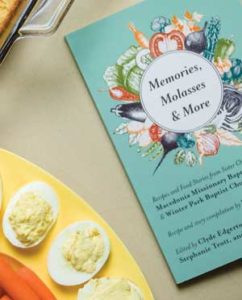 From Page To Stage

Memories, Molasses & More, from UNCW Press, is available for sale at both Winter Park and Macedonia Baptist churches in Wilmington. In addition, the book was adapted into a play that ran from August 3 through September 1 at Wilmington’s TheatreNOW. In it, actors delivered eight monologues that take place on a Sunday, before, during, and after church.