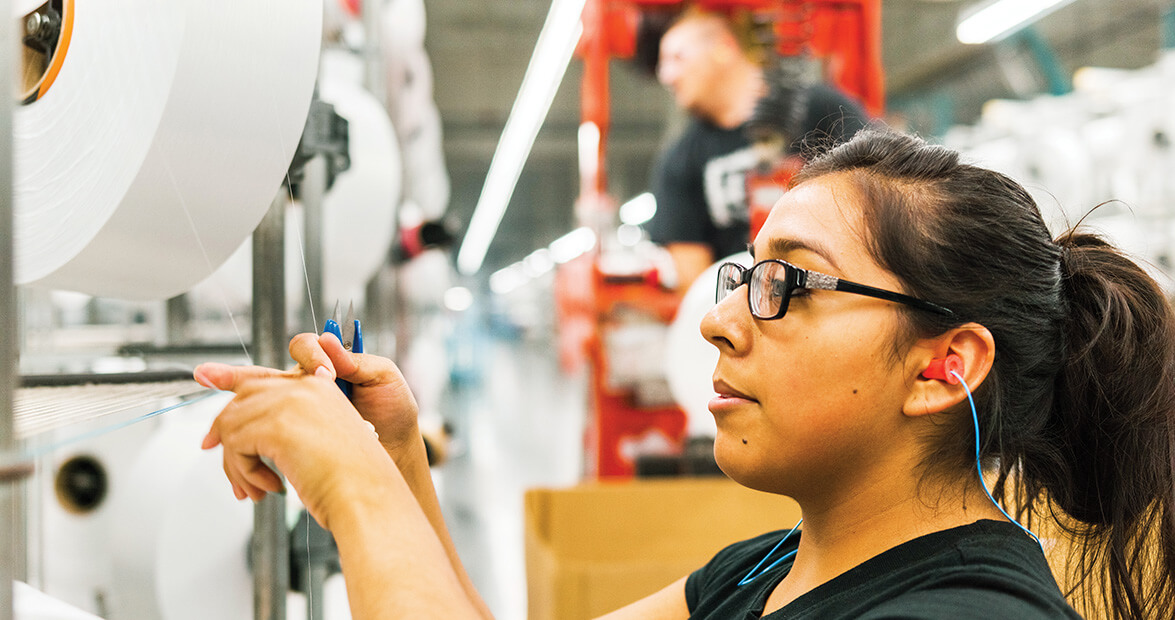 Unifi’s textile mill in Yadkinville is 1.25 million square feet of noise. Some floors roar like industrial vacuum cleaners. Others hum loudly as though filled with air conditioning units. Still others grind like a cave of cement mixers.

As the plant manager of spinning, Kaye Flippin spends her days strolling through the racket, observing employees and monitoring machines. Once a day she climbs four flights of stairs to the roof and escapes the clamor. With the din of the factory beneath her, the longtime mill hand takes time to think. She leans on the ledge of the roof and looks north. On clear days she can see Pilot Mountain, where her daughter lives, and the Blue Ridge Mountains, where she has a home, but on this overcast day, gray clouds block her favorite views. Instead, her eyes drift to the parking lot below.

“There’s more vehicles now than during that bad time,” Kaye says, scanning the lot and giggling uncomfortably. “I’m sure there’s at least 50 or 60 more than the bad time.” The “bad time” is never far from Kaye’s mind, or anyone else’s in the textile industry. She’s referring to that period in the 2000s when North Carolina’s biggest industry was walloped by outsourcing. Overnight, the percentage of textile products made in America collapsed from 56 percent to 18 percent. Thousands of people were laid off. Companies went bankrupt. The industry teetered. In some places — towns like Franklinville and Belmont — it died.

Kaye’s employer, Unifi, which is headquartered in Greensboro and manufactures polyester and nylon-textured yarns, got hit hard. The company’s sales shrank from $1.3 billion to $750,000, and reported annual losses for eight consecutive years. Staff was cut from 5,000 employees to 2,500. The CEO was fired and half the board of directors was ousted. Unifi had what you would call a bad time.

Kaye is matter-of-fact as she talks about those years. She looks down and picks at her forefinger and recalls orders slowing and machines shutting down. She says the 200-plus workers she manages grew worried, constantly asking when the machines would restart. Her answer was honest: When we get more orders. She could have admitted that she didn’t know. But mentioning orders meant a chance existed that the machines might restart soon.

Kaye had worked in textile mills since leaving her father’s Danbury tobacco farm 30 years earlier, and she’d never seen anything — any setback, any slowdown, any shortage — so bad. “It was dismal,” she says, sweeping brown bangs away from her forehead.

In the midst of the bleakness, Unifi’s product development manager, Charlie King, came to Kaye with a request. He was trying to make recycled yarn from the polyester waste that accumulated every day in the factory, and he wanted to run some on her machines to see if enough could be produced to sell. But there was a problem: Though Roger Berrier, King’s boss, had given him the go-ahead, no one in senior management knew about the plan. “I don’t know if we’ll be fired or not, but would you do it?” King asked.

Kaye Flippin, a 35-year Unifi employee, looks north from the factory’s roof. As plant manager of spinning, she played a crucial role in bringing Repreve into existence. photograph by Joey Seawell

Early tests were disastrous. Filament made from recycled fabric split in the machines. Strands of polyester spewed everywhere, collecting on the floor. Kaye shut down the machines and fussed at King while her staff cleaned up the mess. “Well, I guess you have to get back to work,” she said.

King worked on the project for a year and a half, month after month of trial and error. With Unifi stock in free fall, the project took on an air of secrecy. King would go into the office of his boss, Berrier, who oversaw product development, sales, and marketing at Unifi, and close the door before telling him about the latest failure.

Both men realized that if King could figure out how to make the recycled material strong enough to run through the machines at the same pace as virgin polyester, Unifi might have a new product to sell. Talk of global warming dominated the media. Young people were becoming more and more passionate about recycling. Sustainability was becoming a buzzword. Goods made from recycled yarn could be something consumers would pay more for. Recycled yarn could become a premium product.

But Berrier’s bosses thought the experiment was a waste of time. No one was ordering recycled yarn; the company was losing money. How much longer was the experiment going to last?

In late 2007, King finally succeeded in producing a recycled fabric that worked. Unifi named the fabric Repreve, a nod to a “reprieve” for the environment, and, they hoped, a reprieve for their business.

No one bought it.

“We did this great work, and we had to put it on the shelf,” Berrier says.

While King continued to work on improving Repreve, Berrier, who was promoted to president and chief operating officer, looked for customers. In 2008, he got a call from the CEO of one of the company’s longtime customers, Polartec. Polartec used Unifi polyester in fleeces it made for companies like The North Face, but an influx of cheap fleece from China had cut into business. Polartec’s CEO wanted a way to differentiate its product from the import. Berrier suggested Repreve.

A few days later, Berrier met with Polartec’s CEO and negotiated Repreve’s first deal. He landed its second customer a few months later and went on to sign a slew of other contracts. Today, Toyota and Ford use Repreve in their cars. Nike uses Repreve in shoes and apparel. Patagonia puts it in fleeces, and Haggar uses it in a new line of eco-friendly pants. The brand performed so well that Unifi invested $10 million to build a plastic bottle recycling plant on-site in Yadkinville.

In 2010, Unifi returned to profitability for the first time in eight years. “Repreve was a big piece of that,” Berrier says. To celebrate, the company held a carnival for employees and their families at the plant, with barbecue and cotton candy, a bounce house and an inflatable slide, a milk-can toss, and a disc jockey. 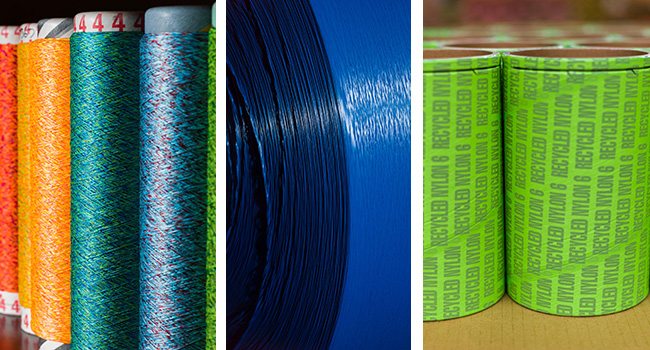 During a recent tour of the Yadkinville plant, Kaye walks past a lime green display for Repreve that illustrates steps of the recycling process. Water bottles sit in a small plastic container at the top. Beneath them is a container filled with glass-like shards of plastic. Below are white BB pellet-size chips made from the plastic shards. The pellets are liquefied and cooled to create filament for polyester yarn.

“Now that we have our own recycle center, all of it’s made here,” Kaye says as she picks up a handful of the BB pellet chips. “Anytime you do something yourself, you have more control over it. You can control your own product.”

The textile industry may never be what it once was, but much about the business has improved. This year, for the first time in a decade, the industry is poised to increase the percentage of textile products made in the United States.

Still, workers haven’t forgotten the bad times. If a machine in Yadkinville goes down for repair, workers get worried. “We were putting in a new system on a machine,” Kaye says. “It hadn’t been an hour before an employee said, ‘Why’s that machine down?’” She shakes her head. She understands their concerns, but everywhere she looks, she sees signs that Unifi’s business has stabilized. Machines run constantly, and outside, a crew is constructing the frame for five new silos that will store even more chips for Repreve.

“It’s really amazing what we’re doing,” she says. “There’ll be more jobs. There’ll be another machine to run in recycle. Which is nice. It’s a huge difference.”

A few days later, Kaye exits a door on the back side of the first floor. She wants a break from the noise, but rather than ascending to the roof, she climbs to the top of an open-air stairwell flanking the hole where the silos will be installed. Before the silos block the view, she wants to see the mountains, so she climbs all 101 stairs and summits a platform perched above the roof.

A light breeze ruffles Flippin’s hair, and she looks toward Pilot Mountain and beyond it to the Blue Ridge. There’s no reason to look at the parking lot; she knows it’s full. The bad times have passed. Unifi may need to add more parking spaces soon.