It happened on Oak Island, with my wife and our first child. “It” was a vacation, one that has become definitional for me. I learned that a vacation is not a destination. A vacation is a state of being, a cessation of anxieties, a certain blankness. It is a floating feeling.

A vacation is a between time. Until you say, “Wait: Is today Tuesday? Or Wednesday?” you are not on vacation. It is an interstitial space. Neither here nor there. Like, maybe I’ll get up and get a drink. Maybe I’ll walk down to put my feet in the surf, or maybe not.

But this isn’t a paean to beachness. It just so happens that the time I experienced peak vacation, it happened at the beach. That beach.

Louie was about a year and a half old when we suddenly found ourselves at a hesitation point. He was old enough to be walking a lot and talking a bit, but still young enough to be hanging close, and for naps to break up the day. He was kind of still a toddler but not quite yet a little kid. He was in between. I had finished a big work project and wasn’t on to the next thing, and June was at a point where she could stop, so we realized: We can do this. We are all in between. We can have our first family beach vacation.

But it was a beach vacation with an 18-month-old, so we wanted none of the sticky-drinks-on-the-deck that you get at Carolina Beach, nor did we want the complexity of planning a trip all the way to the Outer Banks. We called a few other families, just ahead of us, and the word came back: Oak Island. Oak Island, of course, has a reputation as a family beach. None of your boardwalk lights and juke joints at Oak Island, just a lot of rental properties, enough restaurants to choose from (with at least a couple offering the cheap fried seafood that is a nonnegotiable requirement). Someplace to get ice cream, someplace to buy a beach towel or replace a blown flip-flop. A grocery store. But mostly what Oak Island has is the beach.

What’s more, said one friend, “On the road in, don’t turn right. Turn left.” That took us to Caswell Beach, which is Oak Island’s Oak Island. If Oak Island is the calm, restorative alternative to North Carolina’s higher-energy beaches, Caswell Beach is the even calmer alternative to the rest of Oak Island, with nary a restaurant or store along its entire length. We rented a little condo on the beach and commenced to vacate.

Hurricane Matthew all but destroyed the Oak Island Pier in 2016, but the community rallied to rebuild it, and with that, an idyllic new backdrop for a day at the beach. photograph by BRENDA TORREY

Some of what I can tell you about Oak Island applies to any family beach vacation. Louie, in those little diaper bathing suits, churning his legs in the surf, eyes squinched shut in joy, shouting, “Ocean! Ocean! Ocean!” as the first waves of his life broke over those little toddler knees. Walks up the sandy trail from the condo, over the dunes and down to the beach, carrying chairs, towels, umbrella, a little cooler with drinks, bottle, cheese sticks, pretzels.

Daily breaks, with one of us napping with him, the other taking long, empty, silent walks up and down the beach. Evenings the same: After bedtime, one would stay with him, and the other would walk to the pier and back. Then we’d switch. And then we’d sit on the porch under the stars, listening to the waves, and we would talk about what we saw. Once, I saw baby sea turtles emerging from a nest.

One year, we drove a few minutes to Southport and took the ferry to Fort Fisher to see the aquarium. One year, we got to climb the Oak Island Lighthouse, which looks like a smokestack or an old Mercury-Redstone rocket. When kid No. 2, Gus, came along, sometimes Grandma came, too, which meant larger rentals and actual couple’s walks on the beach. One year, memorably, one of those ephemeral cheap seafood restaurants occupied the base of the Oak Island Pier, and we sat on the balcony and listened to oldies and watched Louie, wearing a bucket hat, groove to the music and patiently eat french fries with the dunes behind him, the sky above him, and all the time in the world surrounding us.

But who cares about the specifics? If eating french fries or climbing a lighthouse is the story you tell, then you have no stories to tell. Which is, of course, the point. Sometimes we’d sit and watch a sunrise, or a sunset. Sometimes we flew a kite. Always, we would sit on the porch of the rental and listen to the wind, and take pictures of the sea oats outlined against the clouds, and look for shells and not find any very large ones. Always, we waded into the ocean, holding tightly, so tightly, on to one precious little SPF 30-slick hand or another. 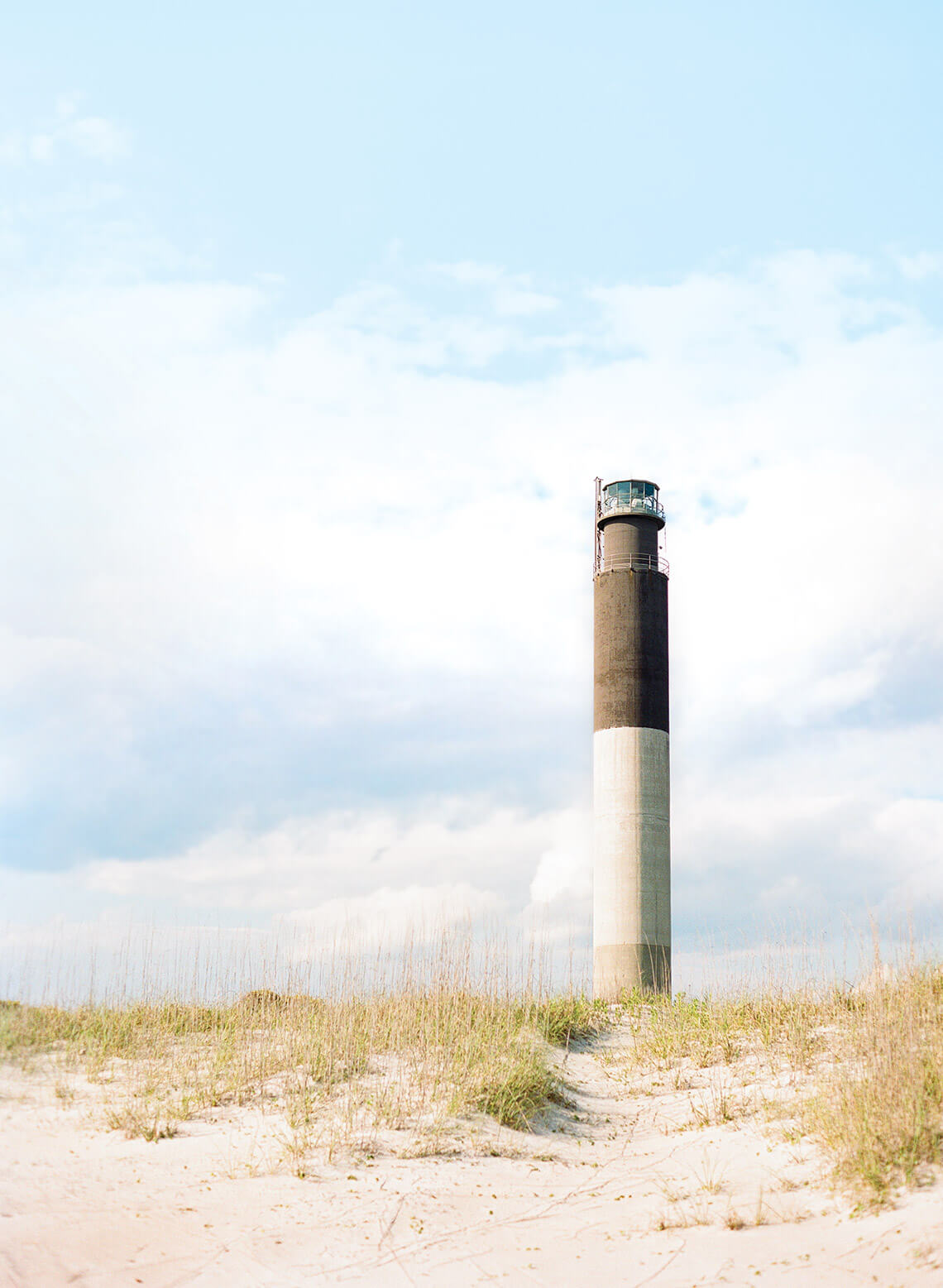 This summer, nighttime visitors to the Oak Island Lighthouse will see a brighter beam cast across the sea thanks to an LED upgrade over the winter. photograph by Faith Teasley

As I say, mostly the memories run together, which is the “what day is it again?” point of vacation that Oak Island so powerfully supplies. But one memory sticks out from that first year. Before we arrived, a storm had come, so at a low point along the beach, a little channel had formed, feeding a tidal pool. It filled during every high tide, then slowly shrank until the next came to refill it, and each time it was little smaller. It was a kiddie ocean, we thought, perfect for our little boy.

Each day, when the waves had been enough, we would stow the chairs and umbrella. Then we would walk back out, but not to the waves and the rush and the giant ocean. Instead, we walked just to our little ocean, and Louie patrolled the edge, wetting his feet, grabbing fistfuls of sand, sometimes just stopping, looking up at the clouds, down at the water, feeling the wind rush by his skin, staring in that open way. He watched the beach, and we watched him. The sound only of wind and waves, the sight only of sand and sea, the feeling only of time, either standing still or stretching to infinity.