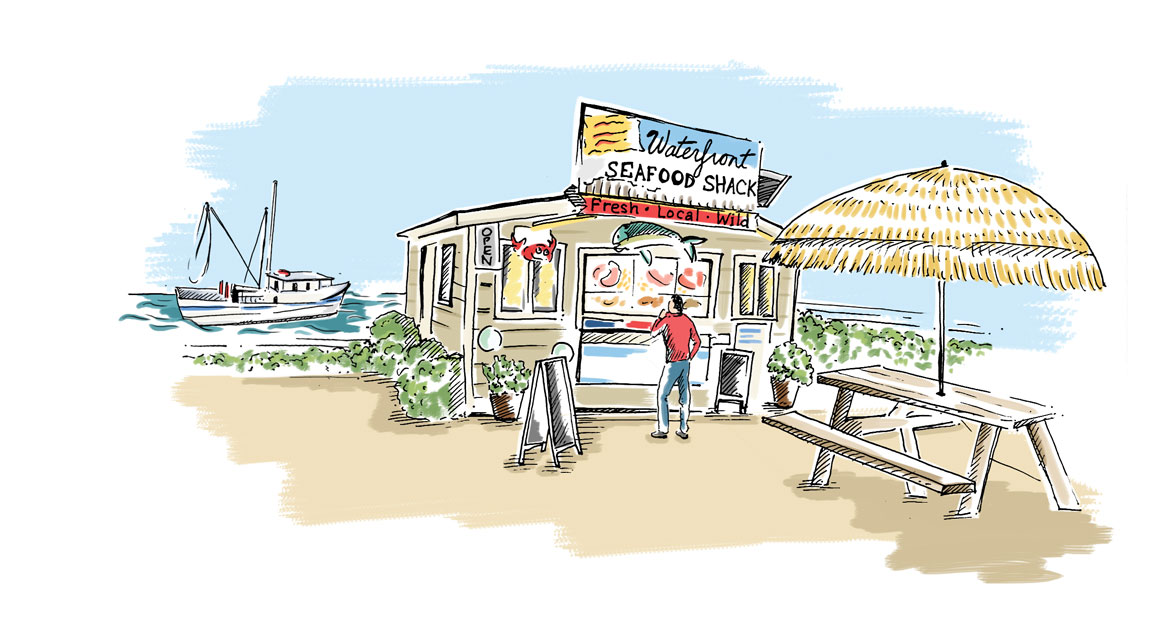 Bob Taylor weighs out two pounds of shrimp. He fills a small cooler with ice, tops it off with filleted flounder. Makes change for a peck of clams, a pint of oysters. The Waterfront Seafood Shack is tiny — there’s room behind the counter for him, a cutting board, and a sink, and room on the other side for two customers, three if they don’t mind getting cozy. But the fishmonger never stops moving. Now cleaning shrimp and dropping them into a bucket of ice; now scaling a snapper and cutting fillets, these, too, set aside in an ice-filled tray. When that’s done, he cleans his knife, scraper, and cutting board.

“My wife’s dad, he opened the fish shack 45 years ago,” says Taylor, who owns both the tiny fish market and the equally tiny restaurant next to it with his wife, Serina. “We took over 15 years ago, and somewhere along the line I got it in my head to cook, so we built a full restaurant. Well, a little restaurant with a full kitchen.”

Taylor and his wife, and both their families, are from Calabash — “We’re lifelong Calabash,” Taylor says, “at least so far” — and so is Justin Martin, their cook. Having grown up on Calabash seafood — fresh and flash-fried — they know how to prepare the classic recipes, and have invented a way to do it right.

While we wait for our orders, my wife and I pass the time by watching the Taylors fillet fish and eyeing every overflowing tray of food that Linda Guggie, the lone waitress on late lunch duty, carries past. 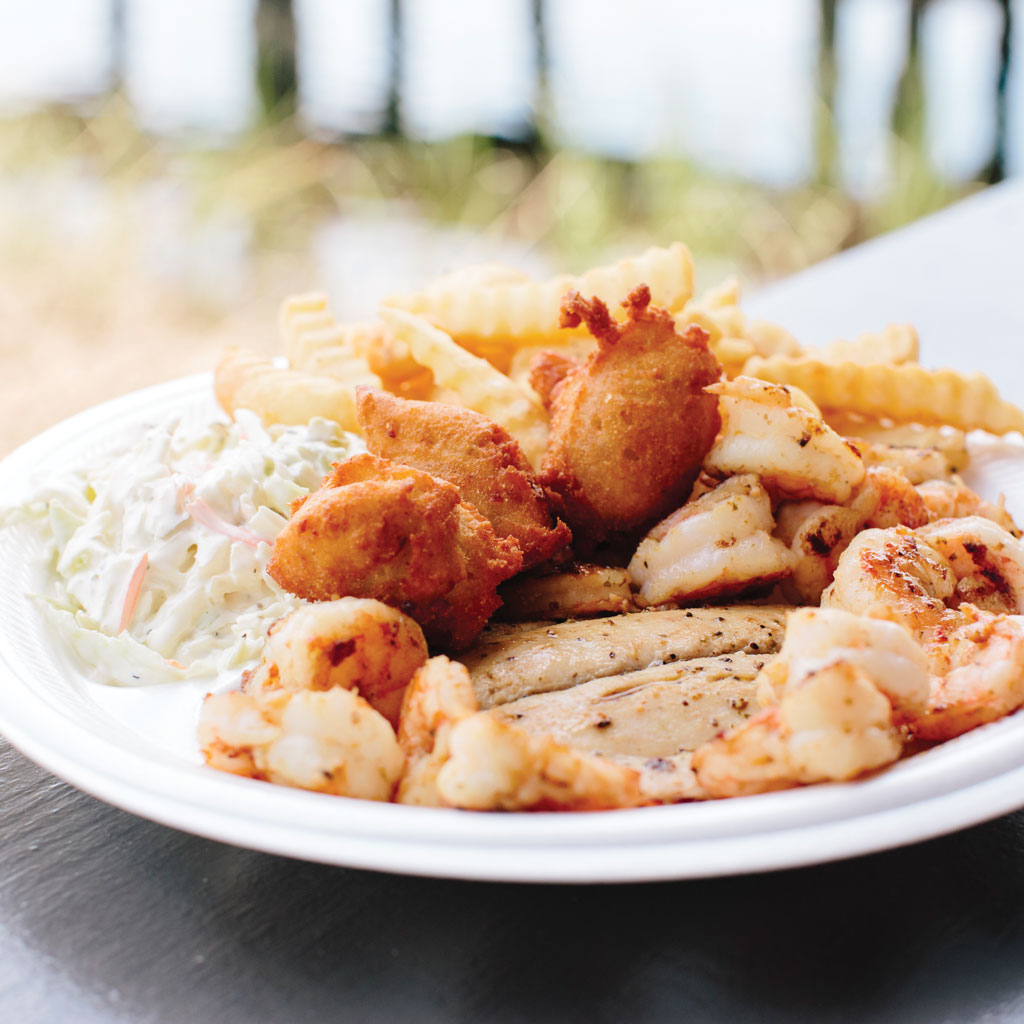 The combo platter of flounder, shrimp, hush puppies, fries, and coleslaw is a favorite. photograph by Joey Seawell

“I’m sorry it’s taking so long, y’all,” she says. “We had to fillet up a snapper for your sandwich. It’ll be right out. More tea?”

Guggie will deliver variations of this refrain about a dozen times a day in the summer. “We just rinsed a bushel of scallops; they’ll be in the fryer any minute.” “Sorry about the wait, but we’re getting some shrimp ready right now.” And, of course, “More tea?”

On any given day in summer, Waterfront Seafood Shack is packed from its first plate at lunch to its final just-about-too-dark-to-eat platter that night. A line forms at the walk-up window. Parties mill around in the parking lot, eyeing tables like an osprey watching the marsh creeks. 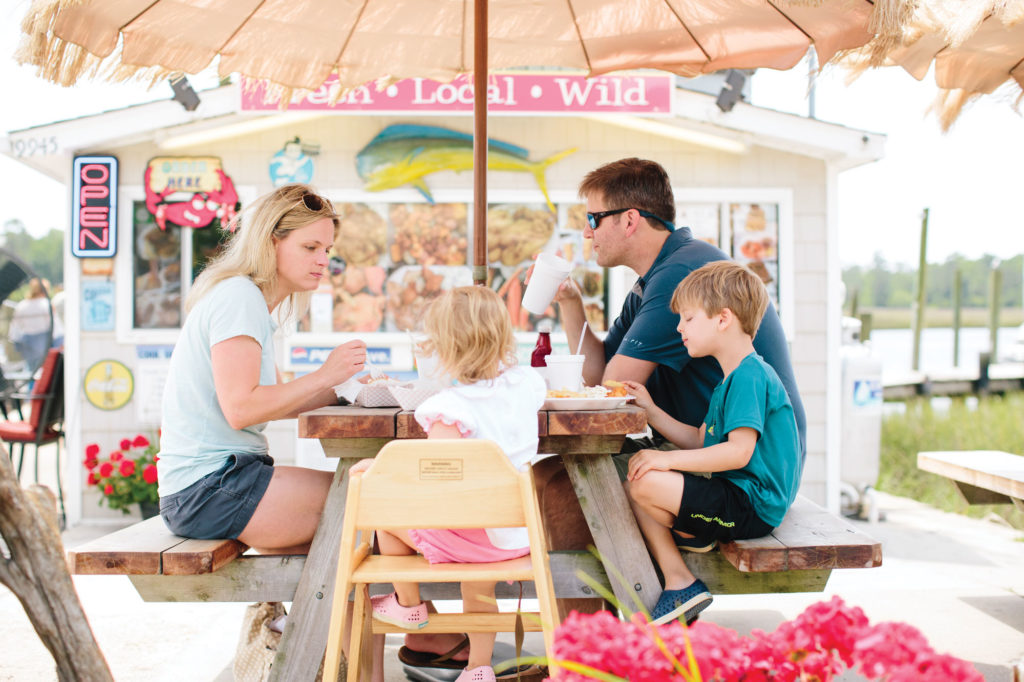 The Pittman family of Charlotte eats up. photograph by Millie Holloman Photography

Through it all, Guggie weaves her way between tables, nearly dancing out an eight-step shag rhythm as she delivers refills, menus, unneeded apologies, trays heavy with food. She holds those trays high, then lowers them to waist level, inclining them just so. Other times she holds out a plate of food like it’s a prize.

For many diners, it is a prize. That snapper sandwich? Flaky, just enough of a batter crunch, and a bun that’s buttered and grilled. The combo platter — flounder, shrimp, hush puppies, fries, and coleslaw — is as classic a Calabash dish as you can order. The flounder fillet is longer than the plate is wide and drapes over the sides; the shrimp’s piled high like summer clouds.

And dessert. You can’t skip dessert at a place like this. Not after you’ve seen two tables nearby order banana splits and share sundaes, and watched a kid navigate a three-scoop cone. Certainly not after you heard about the grilled pound cake topped with ice cream.

It’s everything. It tastes like a bite of hometown summer decadence. And after a meal of light, fried seafood, it’s exactly what you need to ground you in the meal, in the moment.