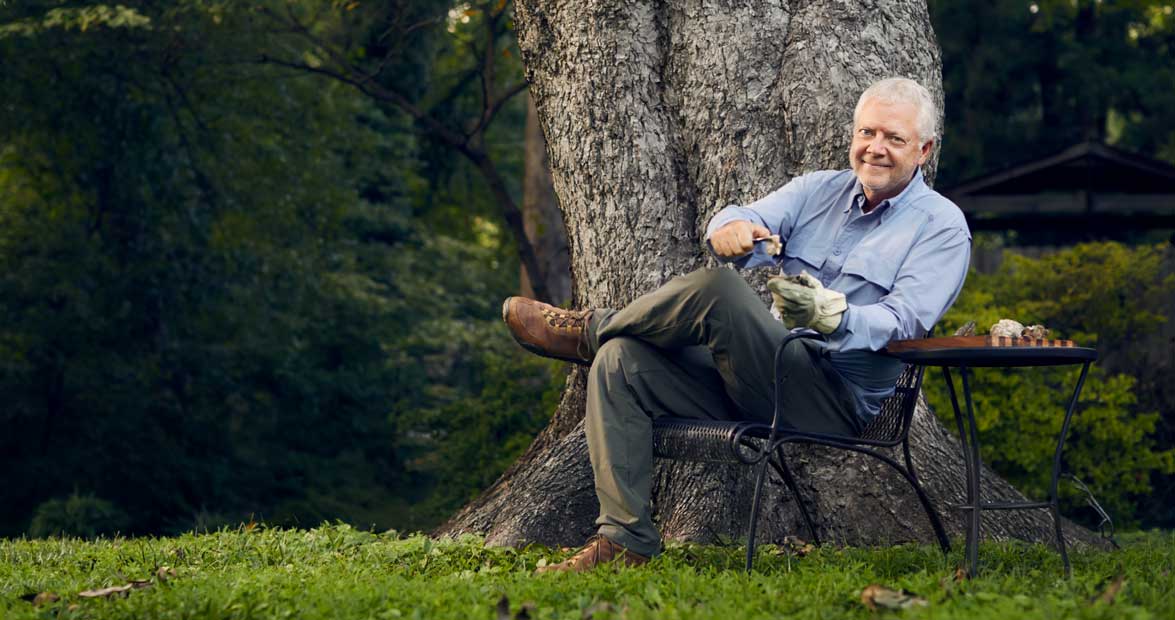 You start at the umbo. Everyone knows that, even if they don’t know that they know that.

Watch: You hold the oyster in one hand, the oyster knife in the other, and even if this is your first oyster roast, your first belly-up to the backyard oyster bar, your eye falls naturally on that rounded knob on one end of the mollusk. It is the prominent bulge above the oyster’s hinge line. Some people call that hump the oyster’s “beak.” That is the umbo — a very handy term to toss about as you gain experience with this whole oyster-shucking thing — and that is where you start.

The oyster is not a Rubik’s Cube, you understand, nor a theft-proof bank vault, nor an enigmatic metaphor for life’s travails and opportunities. It’s an oyster, and this is how you shuck it — and it would be in your best interest to learn quickly, because likely as not I’m on my fourth or fifth oyster already and you haven’t cracked open a single one.

One reason I’m ahead is that I settled a few initial matters years ago. All oyster shuckers must decide if they are an open-hand or a table shucker, and one is as good as the other. I’m a hand shucker, which means that I hold the oyster in an open palm, gloved or covered with a folded dishrag, and dig in from there. Table shuckers place the dishrag on a counter or tabletop, set the oyster on the rag with the umbo facing out, fold the dishrag over the top and bear down to hold the critter in place. Either method is acceptable. I’ve even been known to switch things up during a marathon oyster feast.

With the oyster held firmly, one way or the other, I take the point of an oyster knife and slip it into the shell hinge right there at the umbo. If there is art in the shucking of an oyster, this is the moment it manifests: feeling the blade tip slip into that snug little sweet spot, secure in the hinge, with purchase enough for the application of power. Now, with the knife tip in the oyster joint, I torque the handle like I’m revving a motorcycle throttle. If you merely pry up and down, you’ll more likely crack the shell. But a stout motion will crack the seal. The shell halves will separate. There will be a brief moment of celebration. You will think that you are an oyster shucker. But you’re really only halfway through the process, and what comes next just might be more important than all that has come before.

Let’s stop right here and take a breather, dredge a saltine through some melted butter and clear our minds and palates. Because you need to know that there is another way. The method described so far is known as “butt-shucking” an oyster, as opposed to “front-shucking” the bivalve. This other way is to insert the oyster knife between the shell halves on the thin side of the oyster, into what some folks call the “bill,” opposite the umbo. Some of these folks even use a stout paring knife instead of an oyster knife, to keep from chipping the more delicate edges of thinner shells’ lips. And some of these folks contend that it just takes too much effort, energy, and power to crack open the umbo.

None of these folks are to be listened to. I’m a dedicated butt-shucker. I have acquaintances who are front-shuckers, but all my friends go in from the umbo. Front-shucking works pretty well when employed on farmed oysters, each one individualized, cultured, groomed like a show pony, and clean as a whistle. Our wild, natural-grown oysters can be clustered up like three layers of roof shingles, though, and so muddy that it takes a car-wash pressure wand to turn them civil. You can’t pussyfoot around such an untamed animal. Grab it hard and show it who’s boss. If you choose to probe the slender bill with little feints and half-hearted knife sticks, then guess what? I’m now up a dozen oysters, easy.

Once the shell is initially cracked, this is where many people goof up the shuck. A fresh oyster is a creamy little gobbet of pure brine and flesh. You don’t want to muck it up with shell grit and grime. After you’ve motorcycle-revved the mollusk open, wipe the tip of the knife clean on your glove or dishrag. Gently raise the upper shell and use the knife to slice through the adductor muscle that holds the two shells together. Turn the oyster a quarter-turn clockwise, then cut the bottom adductor with a U-shaped sweep of the blade. If it’s going straight down the hatch, slurp it out of the shell or pinch it to the knife blade with a thumb. If you’re shucking oysters to serve on the half shell, use the knife blade to flip the oyster meat over, to present the more cleanly cut bottom half.

Nice work. You might be catching up with me. 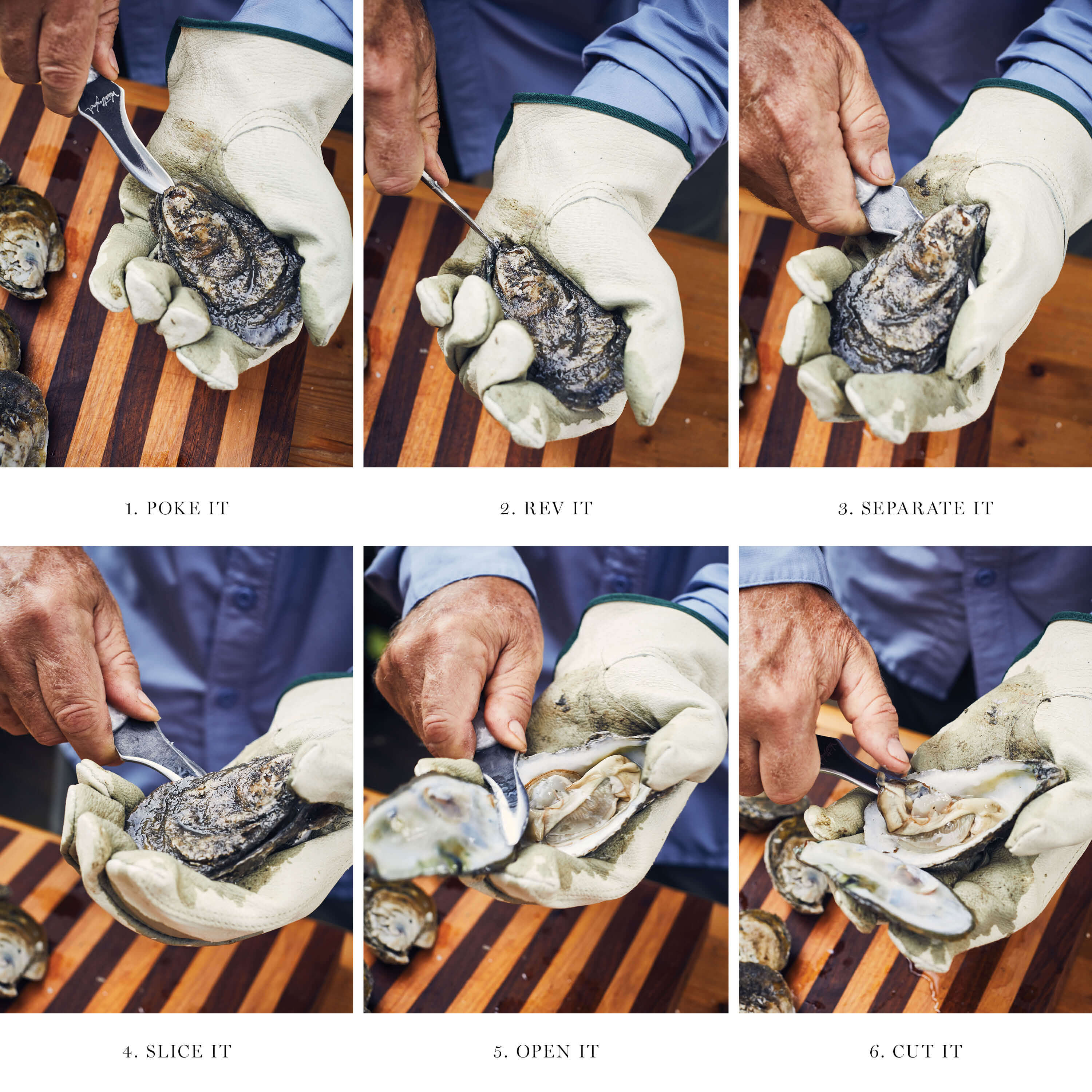 Oyster eating is undergoing a radical sea change these days, in North Carolina and beyond. Cultivated oysters are attracting new fans who rave about the merroir of the various waterways like wine connoisseurs fawn over notes of tarragon and absinthe associated with the terroir of a sauvignon blanc. I’m all for it. More oysters mean cleaner water and more concern about water quality and, who knows, if the poets are correct, maybe more love for all of mankind.

But for me, much of the attraction of oyster season is getting in there among my fellow oyster eaters around a makeshift table that teeters in a backyard or on the beach. I line up, knife in hand, and jack my shoulders out a bit to clear some room. Shell shrapnel and elbows are likely to be flying, and I don’t want to harm my neighbor. When the oysters are dumped, raw from a burlap sack or hot from the fire or steamer, everyone has an equal crack at the bounty. The gloves are off — or, rather, on — and we all hear the starting gun. I don’t apologize for the gluttony about to commence. I’ll pop a fresh-shucked oyster into my mouth like a peanut, maybe murmur for a half-moment about whether it’s salty or sweet, then shuck another one. And another one. As fast as I can.

I see you’ve pulled almost even. Bring it on, my friend. Oyster eating is no contest, but you wouldn’t know that watching me.

Still hesitant to shuck your own? We’ve got you covered with Shucking 101.