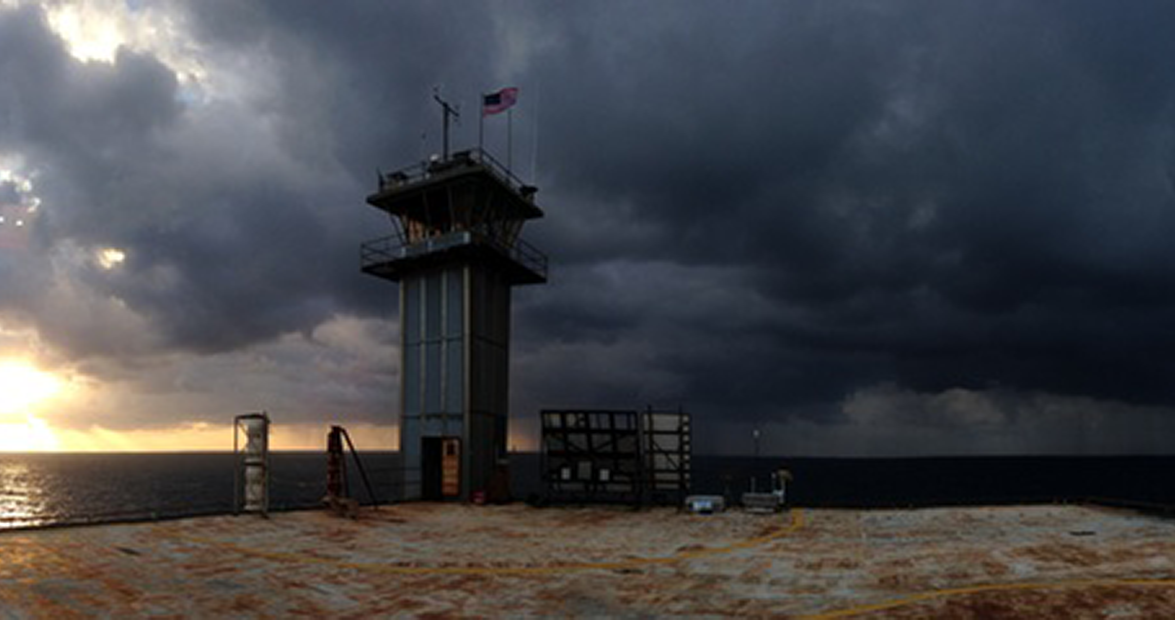 At this moment on Thursday afternoon, the storm’s barreling through the Bahamas. According to the National Hurricane Center, the Category 4 storm is predicted to pass by the North Carolina coast on Sunday. At the very least, nearly every meteorologist says North Carolina’s in for a massive amount of rain, flooding, and the problems that come with them. But Hurricane Joaquin’s exact track is still quite uncertain; the storm might turn left and crash into the coast somewhere (probably not North Carolina, although it could graze the Outer Banks), or it might wobble off to the right and harmlessly spin away into the Atlantic.

Well, not totally harmlessly. About 32 miles south of Bald Head Island is Frying Pan Tower, a former U.S. Coast Guard light station. It sits at the end of Frying Pan Shoals, the southernmost point of the Graveyard of the Atlantic, a shallow stretch of ocean that extends outward from the Outer Banks that’s notoriously treacherous for ships. A lightship was first stationed at the end of the shoals in 1854 to warn sailors, and a permanent tower was built on that spot in 1960, complete with a helipad and living quarters, which were no longer needed when the tower was automated in 1979. In 2004, the Coast Guard decommissioned the tower (thanks, GPS), and put it up for sale. In 2010, Richard Neal, who’d never seen it before, bought it on a lark for $85,000, and has worked to both restore it and use it as a bed and breakfast, accessible only by boat or helicopter.

Neal, who lives in Mint Hill and works in Charlotte, four hours from the coast, is on the tower quite a bit, coordinating volunteers and acting as innkeeper. And, as it just so happened, he was there in July 2014, when Hurricane Arthur scored a direct hit on Frying Pan Tower, bringing 99 mile-per-hour winds to his isolated spot out in the middle of the ocean. This is what that looks like:

Neal took even more storm selfies, including this video showing massive waves, some of them 24 footers with 30 foot swells, crashing 85 feet below his feet:

Then he dropped a GoPro camera into the water below to show how the fish were riding out the storm:

There are other videos, including one of a NOAA buoy breaking free and floating away. Amazingly, Neal was able to upload all of them to YouTube as the storm was sitting right on top of him. He has a microwave Internet connection that beams plenty of bandwidth out to him from a tower on the coast. And he’d gassed up on diesel to run generators that kept the power on. He passed the time fairly quietly, he says, playing cards and games with three of his kids and a close friend. Yes, there was pounding rain; the water collection system up on the helipad took in 9,000 gallons in one hour. Yes, a window blew out, but that didn’t stop anyone from calmly enjoying coffee and cinnamon rolls. Yes, there was shaking, he said, but it wasn’t all that bad. Inside, there wasn’t all that much evidence that a hurricane was blowing by outside until Neal would, occasionally, clip himself to something stable, hit record, and push a door open.

Are we in for a repeat at Frying Pan Tower? Maybe. But Neal says this time, he won’t be out on the tower. He does have two webcams fired up to show what’s going on at the tower, both above and below the water so you, like last time, can safely watch an angry Atlantic from afar.

UPDATE (October 2, 2015, 9:00 a.m.): The latest track takes Joaquin further east, away from the mainland. That’s good news overall, although we’re still in for a massive soaking over the next few days.

And, as soon as we posted this on Thursday, Neal called to say that he was driving to the coast, trying to get on a helicopter Friday morning to fly out to the tower. If he’s successful, he’ll probably be working remotely on Friday, then riding out whatever passes his way over the weekend. If nothing else, he’s proving it’s possible to telecommute to your job from a old Coast Guard platform nearly three dozen miles out to sea. Stay tuned.