About a hundred feet behind her home in Asheville, across a pebbled path that threads an organized tumble of a flower garden and up two massive stone steps that look as though they rose out of the earth to be a threshold, Barbara Swell swings open the back door of her cabin and steps inside — and back in time.

Swell, a cooking instructor, and her husband, Wayne Erbsen, who teaches music, moved into their main house in 1985. When the adjoining property became available a year later, they jumped on it. Not only did the new tract back up to a forested park area that would provide privacy, but it also came with a 1930s cabin built from a catalog kit, likely Sears, Roebuck & Co. or Montgomery Ward & Co. The original portion of the cabin is made of slender logs so uniform that one might suspect they’d been fabricated if it weren’t for the occasional knot or eye. They’re stained dark red like an old barn. Additional rooms were added over the years as the needs of the occupants evolved and wall sizes no longer had to be limited by the length of logs. 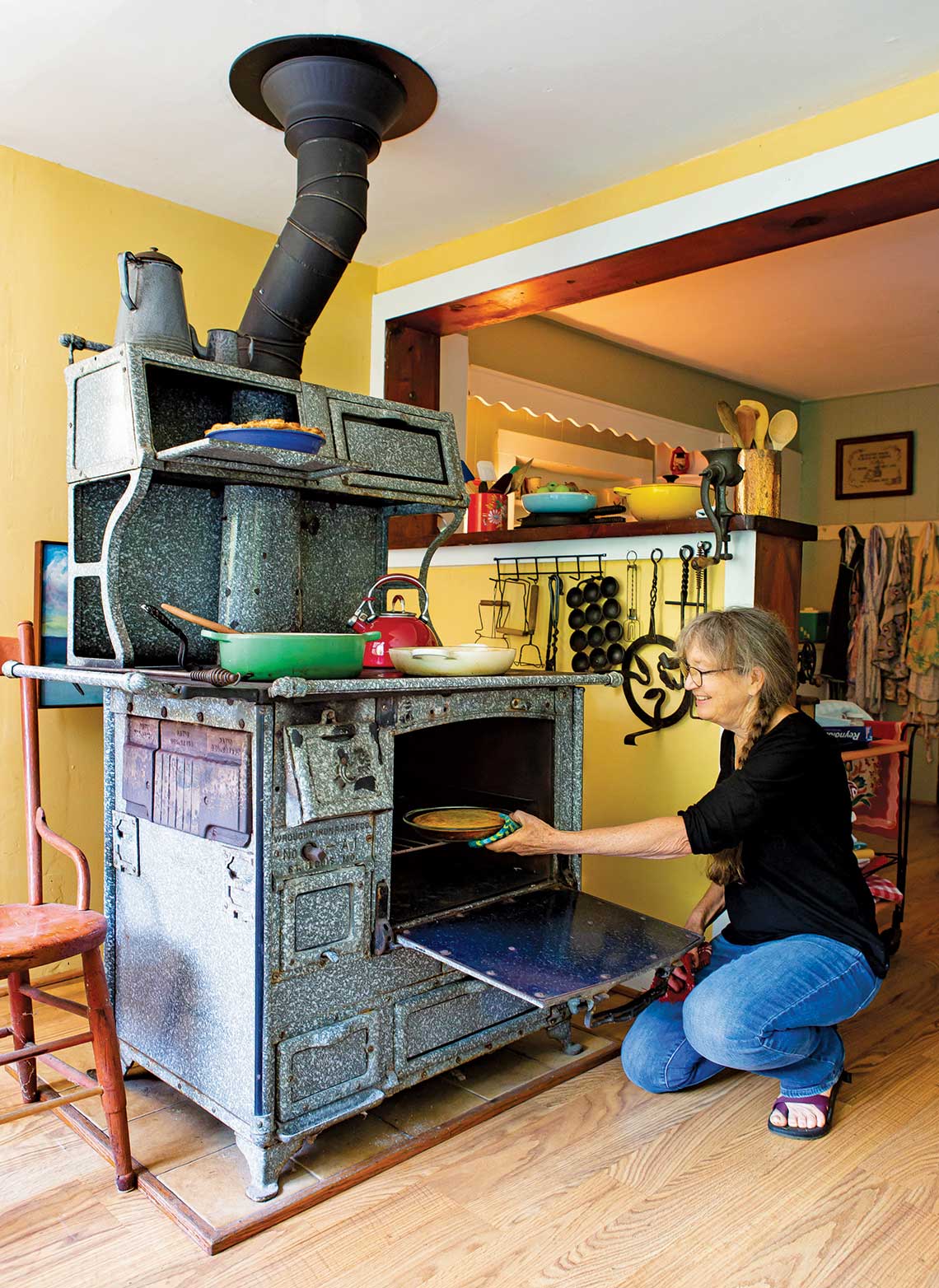 In the kitchen of her log cabin in Asheville, Barbara Swell uses a vintage cookstove to prepare dishes. photograph by Tim Robison

The front room, with its wood floors polished smooth by countless footsteps, spans the width of the cabin, anchored by a stone fireplace. It holds a welcoming arc of mismatched wooden chairs where musicians sit when Erbsen gives lessons and hosts jam sessions. Turns out that musicians passing through the area have often stayed in the cabin over the years, as if part of the cabin’s destiny is to host guests who arrive ready to learn and share.

A couple of cozy guest bedrooms and a bath and a half were tacked on to the side of the cabin. Opposite is the kitchen, where Swell comes when she needs to slow down and step back.

Swell teaches her popular cooking classes in the cabin instead of the main house because it looks like her grandmother’s kitchen and has the feel she wants. It harkens to a time when one generation of cooks taught the next, and then everyone gathered around a table to eat together. For her part, Swell’s fascination with old recipes and their accompanying stories started when she was a child in 4-H. Her mother bought a little notebook for her to jot down information while she cooked with her grandmother, aunts, and elderly neighbors. “I learned at the elbows of excellent cooks,” she says. “Home cooking is best taught in person.”

Everything in the cabin kitchen was handed down from those women. These practical items were once used simply to get the job done but these days are charming and evocative, worthy of an antiques shop. The only tools that must be plugged in are two early-model mixers perched on a pie safe and a white enameled electric stove. 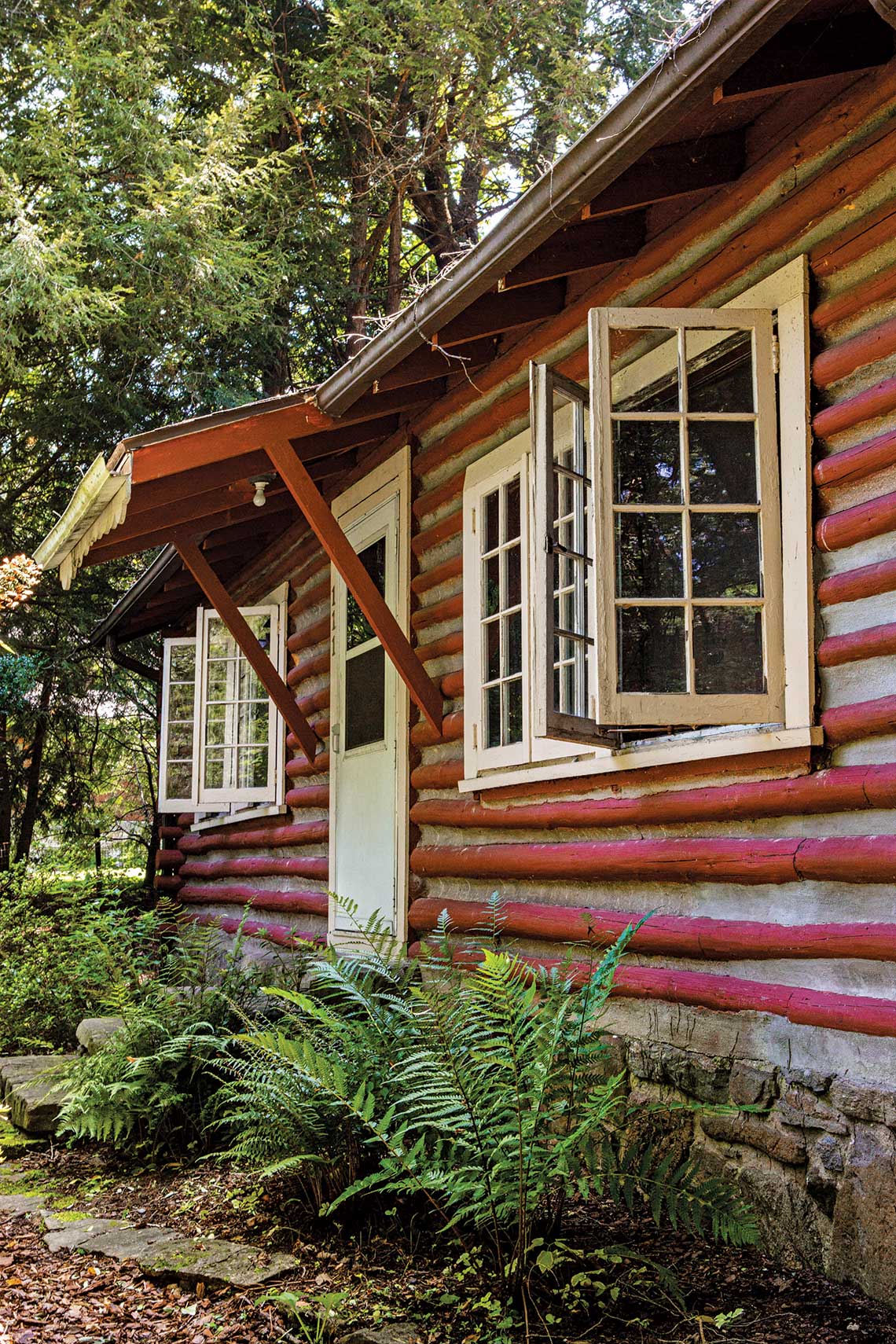 The 1930s cabin where Barbara Swell teaches is a cozy place to gather. photograph by Tim Robison

Around the corner, a restored Home Comfort wood-fueled cookstove sits in a nook, surrounded by windows that can be opened to invite in summer breezes or latched to turn away winter winds. A stoked wood cookstove gently crackles and pops, and wisps of smoke scent the air. “To cook on a wood cookstove is to dance with temperature. You have to continually mess with it to get what you want,” Swell says. “My wood cookstove classes often start out at the woodpile. You can’t have a wood fire without splitting and selecting wood.”

According to Swell, the lifespan of most woodstoves is only 25 years, so finding old ones that still work and the parts to repair them is challenging, and can be pricey, too. “Some folks don’t bother to part with the rusty stoves left in the basement or stuck out in the shed until they need cash,” she says with a chuckle. “Occasionally, the price is equal to what somebody needs to fix their car.” 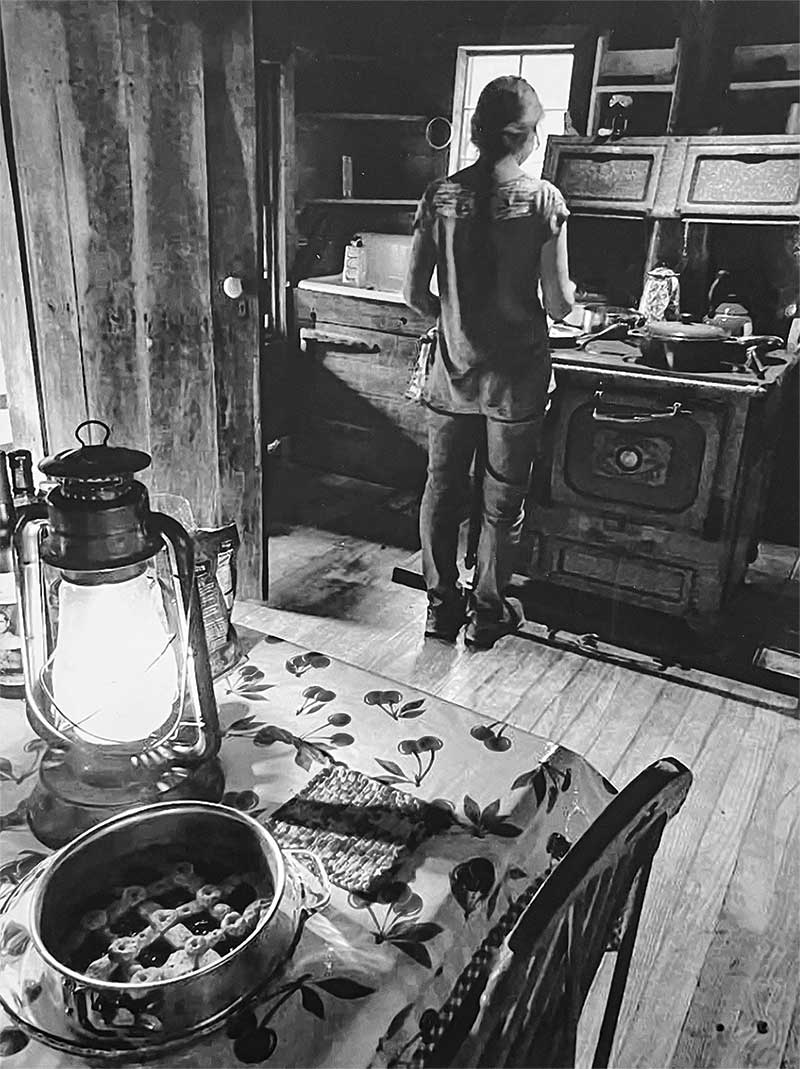 When Swell and her husband, Wayne Erbsen, need to get away from the bustle of life in Asheville, they escape to their second cabin, built around 1880 and located way off the grid in Madison County. Photography courtesy of Barbara Swell

A row of soft, time-worn vintage aprons made from flour sacks hangs along one kitchen wall. Swell hands one to each student when they arrive, believing that the act of tying one on serves as a subtle costume change to ready them for what’s to come. As she describes the differences between log cabin cooking classes and others, her thoughts spill out like song lyrics: “Rustic Appalachian log cabins bring to mind authenticity, a place that’s unpretentious and real and homey. The type of food we make in all of my classes is the same, using close-at-hand ingredients that are tended and prepared with hand-me-down skills and care, and shared with friends and family. If you teach a class in a log cabin, the stage is already set for a meaningful cooking experience.”

With modesty that belies her years of experience and the tall stack of paperback cookbooks she’s authored, Swell says that she’s a home cook, not a professional one. “I like to get out of the way of a great ingredient and let it shine.” She can make many things well, but she’s particularly fond of pies. 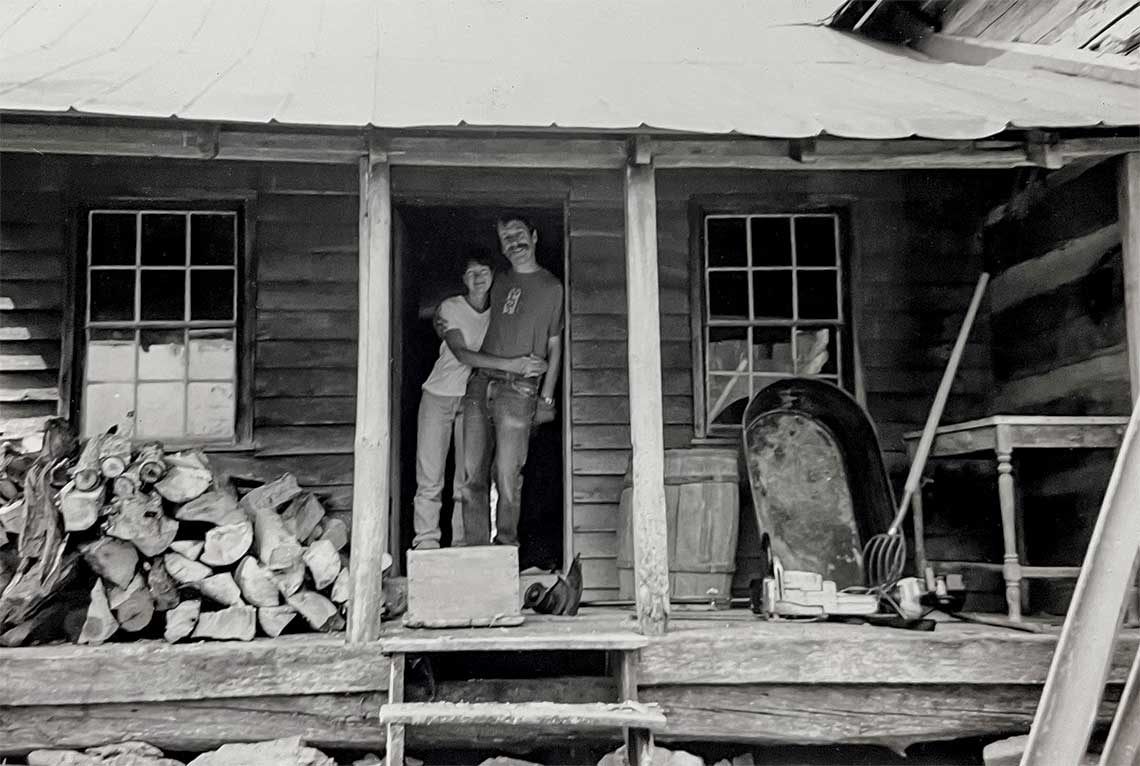 After purchasing their Madison County cabin in 1999, Swell and Erbsen posed for a photo to mark the occasion. Photography courtesy of Barbara Swell

Swell believes that there is pride in pie, that it’s a creative art form that requires real skill and is best learned through hands-on lessons. “Ideally, pie pastry is taught in person,” she says. “You must experience it to understand it. Learning it in person is enriching. And even then, you may have to make 200 crusts to get to the point you’ll be happy with it.”

She also believes that pie-making is a loving gesture. “You should hold thoughts of those who will share it, all that good juju. You must center yourself and get into the flow. That’s therapeutic,” she says. “Back in my social worker and family therapist days, I’d get people to make pie with me as a form of therapy. Making pie puts us in a good place. It’s an act of kindness from beginning to end, including kindness to ourselves. I pie everybody.”

On days when the Asheville cabin feels too hemmed in by a busy town, Swell escapes to her second cabin, which she and Erbsen bought in 1999. They looked at cabins every weekend for a year before finding this one. It’s older, more rustic, and off the grid — so deep in the woods of Madison County that it’s off the map as well, on what Swell describes as “65 acres of up.”

Through fate and good fortune, Swell met Effie Price, who was born in the cabin in 1914, and over the years, their conversations became a form of oral history. “She craved greasy beans and cornbread,” Swell says. “Each mouthful triggered her stories, reminiscing about the land and her life in the cabin — and, inevitably, old recipes.” 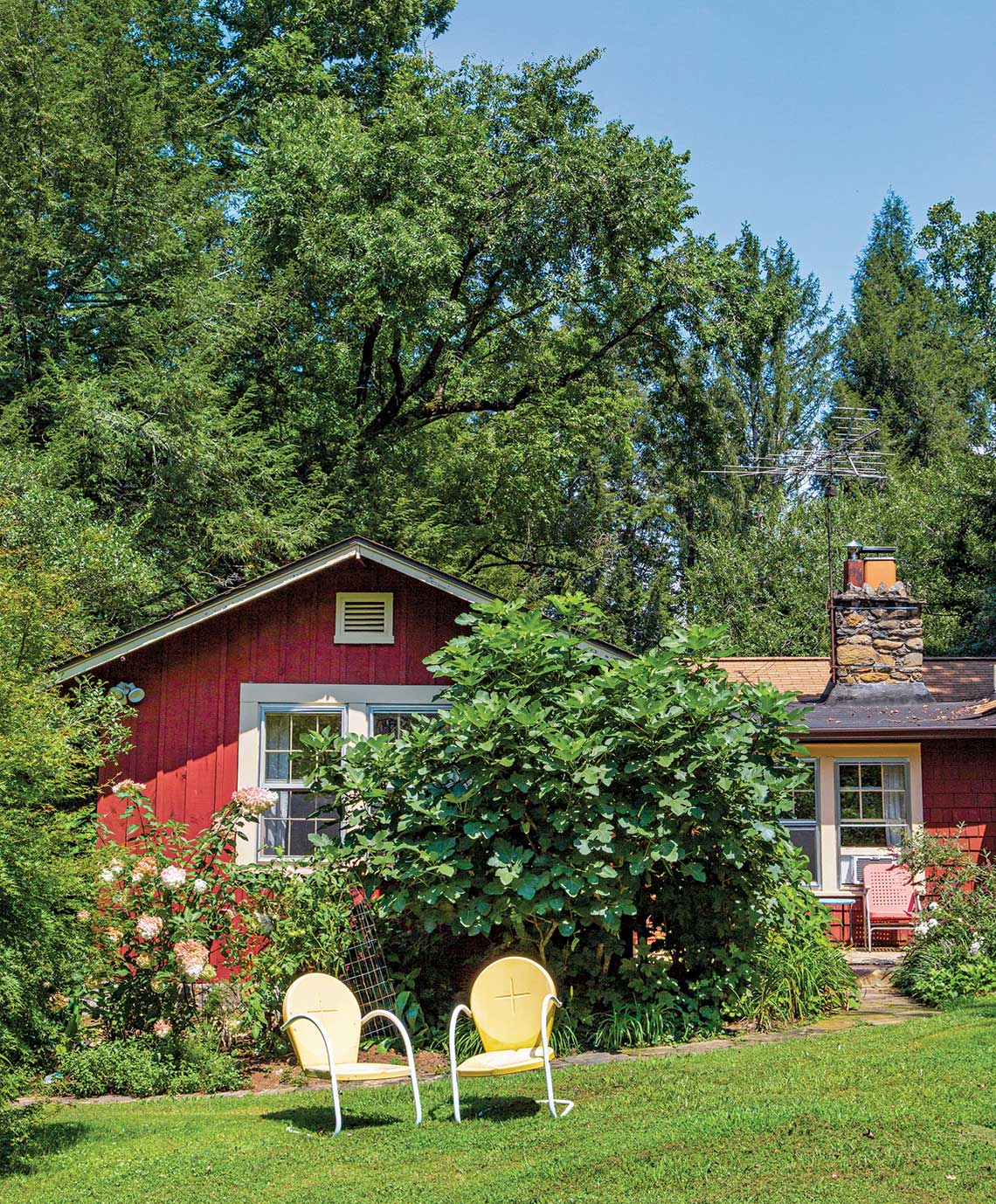 In years past, Swell has hosted a Retro Pie Contest at her charming red cabin in Asheville. photograph by Tim Robison

Price could explain how to make food taste good, taste right. But she described things in terms of what she knew how to do and use, like using a certain unmarked cup for measuring that would baffle anyone else. “It’s not that cabin cooks didn’t measure. They just didn’t measure in standard ways,” Swell explains. “They were masters of the ingredients and techniques that they were used to. They were precise within the realm of their own kitchens. Cabin cooking still demands that we pay more attention to the food than we do to timers and written instructions.”

That’s a quality that Swell can’t get enough of: She and Erbsen just bought a third cabin, a recent find in rural southwest Virginia. “We have a thing about cabins that have the patina of time,” she says with a smile. “I like houses, people, and places that tell stories.”