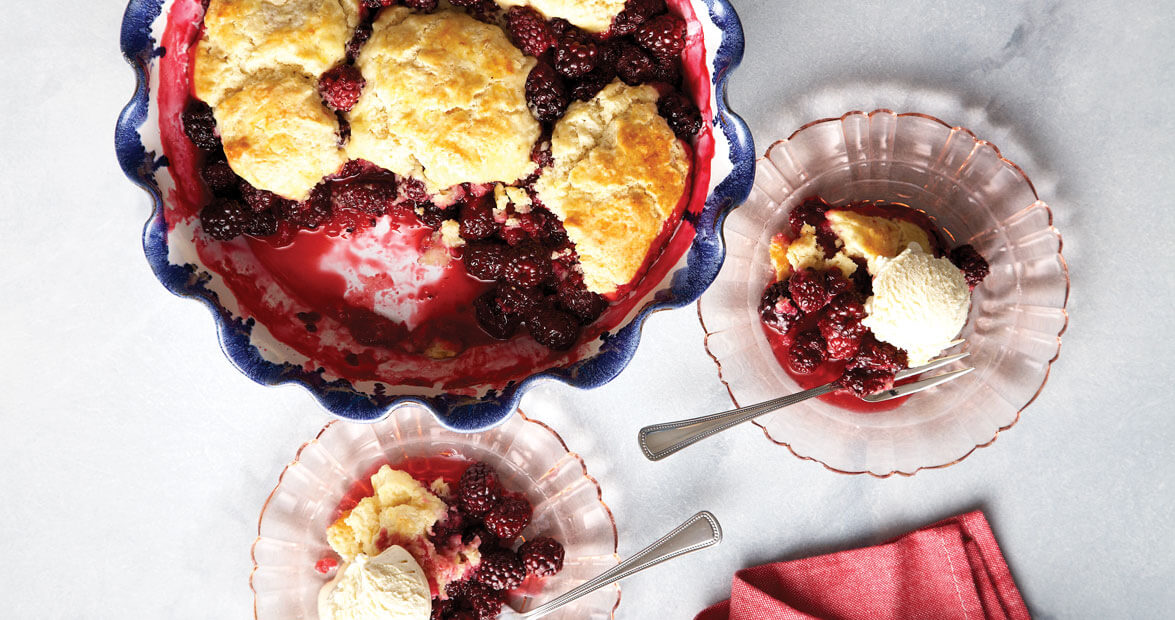 Biscuit had it figured out. That dog loved blackberries like a bear loves honey, but she was a tender soul, and didn’t care for blackberry briars one bit. That’s a hard row to hoe, of course, when the only way to pick a juicy fruit is to shove your doggy face right into the brambles and work some Labrador retriever lip magic. Undaunted, however, Biscuit would worm her way into the brambles, daintily placing each paw into a sticker-free zone as delicately as a ballerina. Many times, as I performed my own contortions in the sticker bushes, I’d find her five feet deep in the blackberries, contorted in the vines like she was playing some four-footed version of canine Twister. Dogs might be color-blind, but Biscuit had 20/20 blackberry vision. She would gently pick each black fruit within reach, one at a time, with pursed lips pooched out like a fish.

I wish I shared Biscuit’s refined approach to blackberry picking, but greed and cobbler lust take over pretty quickly. There are times when I’m just snatching a handful or two for a trail snack, but if I’m trying to fill a bucket with enough fruit for a couple of pies, I go into full-blown blackberry ninja mode. I bathe in bug dope head to foot. I wear long pants and long sleeves, and I might duct-tape my pants bottoms tight around my boot tops to turn back ticks and chiggers. Before venturing in, I whack the bushes with a stick, shaking out wasps and running Mr. No-Shoulders for cover. Blackberry season lasts for a short time, and a nuanced approach just won’t cut it.

In any inventory of ephemeral summer pleasures — lightning bugs, crawdads, Silver Queen corn — picking blackberries invariably scores at or near the top of the list. And right now, at this very moment, we’re in the thick of wild blackberry season in North Carolina. Brambles are groaning with ripe fruit. You don’t have to wander far to find enough to stain your lips and ruin a new shirt. You don’t have to work hard to pick enough to fill a deep-dish pie crust. And with two cups of berries in hand, you’re closing in on cobbler, which trumps just about any other summer dessert. My daughter, Markie, is a cobbler goddess, and she can whip up a blackberry treat in a skinny minute. It seems as if she carries the ingredients in a secret pouch strapped to her leg, like a skin-diver’s knife, to stave off a summer day without such pie. Put a handful of fresh-picked fruit down on the counter, and you’ll smell pastry in the oven within five minutes. It’s the craziest thing: Where two or more blackberries are gathered in her name, there cobbler shall be, also.

In any inventory of ephemeral summer pleasures, blackberries score at the top of the list.

What’s wonderful about blackberries is that they grow practically everywhere sunlight can get to bare dirt, so the savvy fructivore is never far from a sweet-tart fix. Hike along a municipal greenway, and they’re there. They grow on college campuses, along the edge of country church parking lots, and in the middle of the woods, where they mark some old tenant farmer’s cabin. Once I took a highway exit for a quick stop at a barbecue joint and spotted blackberries along the ramp shoulder. I pulled over and filled my baseball cap with some of the easiest-picking blackberries I’d ever found. I was so thrilled that I forgot all about the barbecue, headed back down the highway, and had to settle for a fast-food burger a couple of exits later. Which was a high price to pay for a hatful of blackberries. But not too high, I’m sure you’ll understand. 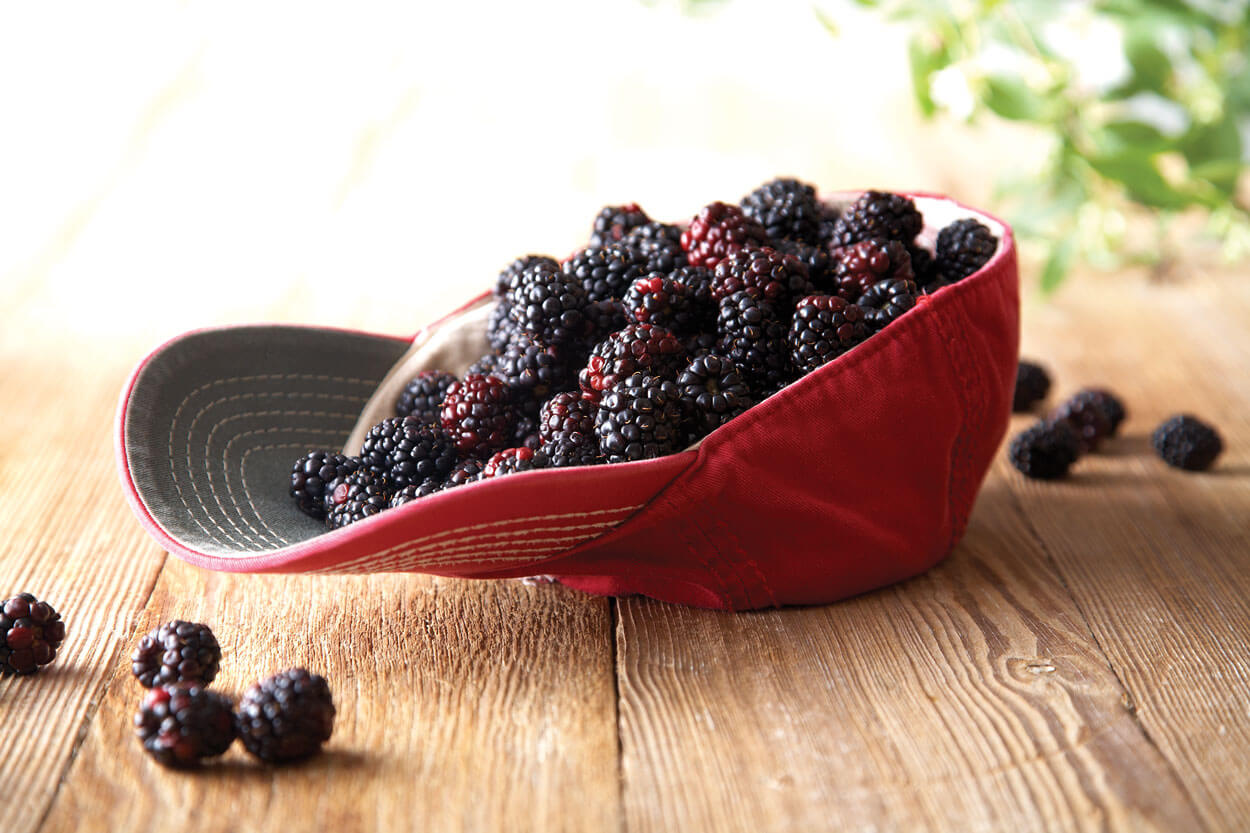 Ripe blackberries spotted in the wild are an opportunity not to be missed. Don’t have a bucket on hand? Make like the author and get creative. photograph by Matt Hulsman

And you can cheat the calendar. By the end of July, if you’re really missing blackberries, all you have to do is climb a few thousand feet, which turns back the clock a week or three. One late summer day, my family hiked down from the top of Mount Mitchell. When we started, it was practically blackberry winter — cool and moist and totally berry-free. But a few hundred feet from the top, we started finding blackberry brambles filled with fruit. We ate our way down the trail, all the way to the parking lot and late summer again, where there were no blackberries to be found.

To be truthful, for my production-level blackberry picking, I scope out good blackberry hot spots in May and June, when the plant’s white flowers can be spotted at a distance. I stay away from places that I think might get sprayed for herbicides, like city streets and parks. On bike rides or dog hikes, I’ll keep an eye out for woodsy brambles on the edges of pastures and fields. Taking a backcountry shortcut to the beach, I keep an eye peeled for power line rights-of-way. More than once, I’ve shown up at the coast bearing half a bucket of berries picked along the way.

Although half a bucket is rarely enough around my crowd. Blackberries don’t ripen after picking, so you need to pick them just right and go ahead and indulge. They freeze OK, but I don’t recommend it — they turn a little mushy when thawed. Blackberries are one of nature’s gifts that root us in time. We live in a Christmas-in-July world, where there are strawberries in the market 52 weeks a year and hothouse tomatoes when it’s cold as ice outside. Which is nothing outright sinful, I suppose. But fresh-picked blackberries are worth waiting for, and worth pining after, and ought always to be eaten with your pants legs wet to the shin with summer dew.

In fact, if you know what’s good for you, you shouldn’t eat blackberries at all after September 29. Which is Michaelmas, of course.

Michaelmas, yes. It’s an ancient religious holiday that fell out of favor a couple hundred years ago, but it’s a timely story right about now. It seems that the archangel Michael and the devil himself got into a heavenly wrassling match, at the end of which Michael threw Lucifer out of the good place forever, and he fell all the way down into hell. Straight into a patch of blackberry bushes. (I’ve yet to find an explanation of why there were blackberry bushes in the lake of fire, but I digress.) Like Biscuit, Lucifer was no fan of blackberry stickers. So he stamped and trampled and breathed fire on the blackberries, cursing them so they’d be unfit to eat.

Evidently, this all happened on or around September 29, after which it is considered bad luck to eat a blackberry. Which, of course, is never a problem around my house. Between Biscuit and Markie, if there’s a berry left at the house by the end of July, it’s nothing short of a miracle.