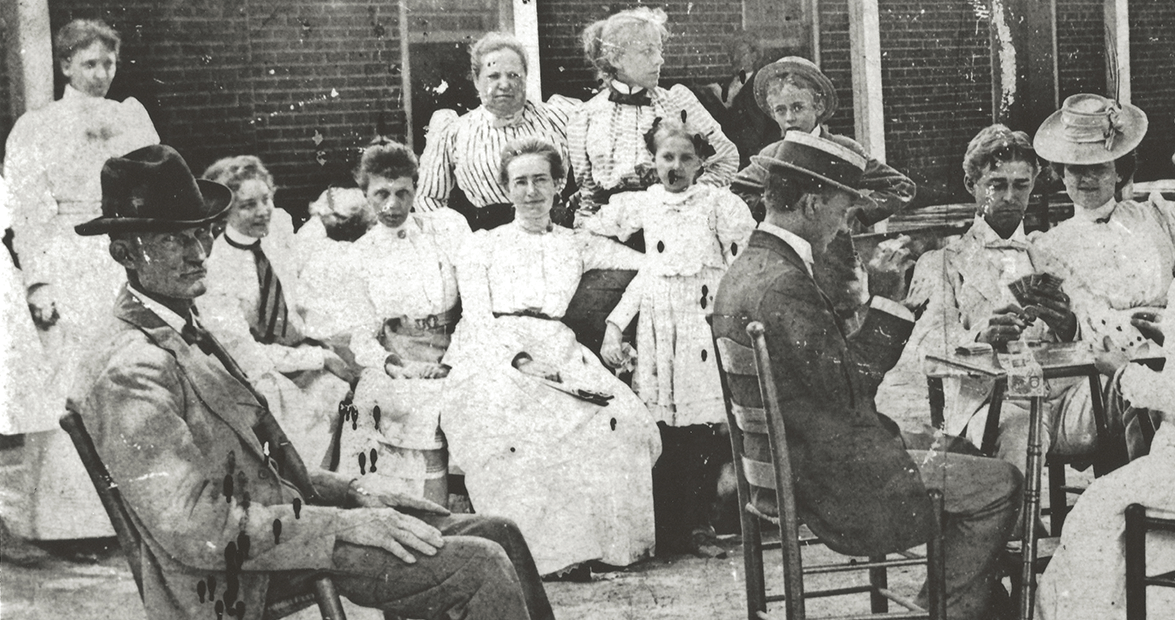 You want hotel amenities? Consider the old White Sulphur Springs Hotel, a grand, late-19th-century resort that once stood in Surry County that boasted of, among other things, a mineral spring — billed as “a very fountain of health” — that was guaranteed to cure whatever ailed you.

An early advertisement for the hotel made the following claim: “If you are suffering with indigestion, liver or kidney trouble, come and drink the White Sulphur water. Cure any disease in two weeks, including inflammation of the eyes or any trouble caused by impure blood.”

Now that’s a hotel amenity. Anybody can offer room service or complimentary soap. White Sulphur Springs had a natural spring that claimed to cure liver ailments and blood disorders.

When Rufus Roberts built the hotel in the late 1880s, he had four things going for him. First, located about four miles northwest of Mount Airy, at the foot of the Blue Ridge Mountains, the hotel afforded guests a view that included the Ararat River flowing only a couple of hundred yards from the front porch. Second, the cooler temperatures made the hotel — which was primarily a summer resort — an ideal getaway spot for guests looking to escape North Carolina’s dog days before the time of air-conditioning. Third, by 1880 the railroad conveniently stretched from Wilmington to Mount Airy, providing fast, affordable transportation for easterners wanting to visit.

“Back in the day, if you lived on the coast or in the eastern part of the state and you wanted to come to the cooler weather, before the automobile you rode the train and the farthest west you could go was Mount Airy,” says Burke Robertson, a local businessman who is developing 150 acres of the old White Sulphur Springs property to include home sites and rental cabins. “So the train brought people here, and that’s why there were hotels in Mount Airy.”

Finally, and perhaps most significant, the hotel had that magical spring, that “very fountain of health,” that lured visitors with its touted healing waters. Since as far back as the 1850s, if not earlier, the locals had been frequenting the spring to enjoy the natural, free-flowing elixir, so Roberts had little doubt the spring would draw guests when he built his new hotel near the spring in the late 1880s.

And he was right: The hotel, built to accommodate 150 guests, became somewhat of an oasis, even in its earliest years. In 1892, The Yadkin Valley News reported, “The White Sulphur Springs Hotel is full to overflowing, and we understand that over a hundred guests have been turned away.”

During its heyday, which lasted from the 1890s into the 1920s, the White Sulphur Springs Hotel enjoyed its reputation as a swanky Southern resort that attracted affluent travelers from throughout the United States, and from as far away as Europe and South America. Old newspaper stories indicate that the hotel’s well-to-do clientele included a number of celebrities of the day. One such guest was Fay Templeton, a popular stage actress who performed on Broadway throughout the first three decades of the 1900s. The governors of South Carolina and Georgia also reportedly made annual summer pilgrimages to the hotel to escape the sultry heat in their own states.

In addition to being a boon to Mount Airy’s tourism industry at the time, the hotel indirectly brought new industry to town. Philadelphia-based Spencer Corp., which was the second-largest manufacturer of infant wear, had an employee who visited every summer. “Then she would go back up north and tell the people with the company about the area down here, and because of her conversations, eventually Spencer moved their plant down here,” Robertson says.

The hotel was also popular among the locals, who frequently gathered there for picnics, church socials, and other functions. An exhibit about the hotel, on display at the Mount Airy Museum of Regional History, states, “Local residents remember dressing to the hilt and riding to the hotel on flatcars outfitted with straight-back chairs. It was not uncommon for the conductor to stop the train for a lady to recover her wind-blown hat.”

According to early descriptions of the hotel property, the spring, which to this day flows less than a hundred feet away from the Ararat, was nothing especially striking to see. “The spring itself is a limpid pool of water clear as crystal and pure as the dew of the morning,” reads an 1895 brochure. “It is about two feet square, two and a half feet deep, and so clear that the bottom is seen as if reflected in a mirror.”

An open-air, latticed springhouse was built to cover the spring, providing shelter from the elements for those who would come to collect its water. The folklore about the spring existed long before the hotel was built. Elsewhere on the hotel’s expansive grounds, guests enjoyed activities such as horseback riding, fishing, rowing, and hunting; and amenities such as walking trails, hammocks, and swings. At the foot of the lawn, overlooking the river, sat a 2,000-square-foot outdoor pavilion that offered dancing upstairs and a bowling alley downstairs, as well as a billiards room. Orchestras and smaller music ensembles frequently played at the pavilion as hotel guests danced in the moonlight. Nearby stood a small gazebo, also within view of the river.

The elegant, three-story hotel itself, with a pair of four-story wings bookending the facility, had a finely appointed front lobby and a massive front porch that stretched the entire length of the hotel. All of the rooms were exquisitely furnished and had electric lights and private baths. Most of them opened onto a wide veranda.

Guests apparently lived and ate well during their stays, too. This description from an early brochure gives an idea of the fine meals that were served daily at the hotel: “The table is supplied with all the delicacies of this mountain section — fine beef, mutton, chickens, eggs, sourwood honey, the richest butter and milk, and vegetables of all kinds.”

Accommodation rates, however, were not exorbitant. An 1895 newspaper advertisement listed the rates at $20 per month, or $1.50 per day for adults, and half price for children and servants. In today’s dollars, that’s only $530 a month, or $40 a night.

Unfortunately, as successful as the grand hotel was during its prime, it also seemed to be an ill-fated attraction. Fire destroyed it several times. Each time it burned, someone rebuilt it, and the hotel thrived again. It wasn’t until the mid- to late 1920s that the demise of the White Sulphur Springs Hotel began to occur. The advent of the automobile opened more travel opportunities, and other mountain communities began to compete for tourism dollars. The Great Depression further crippled the hotel’s future. A July 1929 newspaper article indicated new owners were renovating the hotel and planned to reopen it, but the stock market crashed three months later. Several more attempts to resurrect the hotel were made during the 1930s, but they failed.

The hotel was sold in the 1940s and converted into a giant chicken coop, until another fire claimed the building — and some 28,500 chickens — in January 1955. One reporter’s obituary for the grand old hotel read, “It began as a gracious resort for the well-to-do in the 1880s and ended as the biggest chicken roast in the country.”

Today, all that remains of the hotel is a row of brick columns where the rear foundation of the building once stood.

And, of course, the natural spring down near the banks of the Ararat still survives.

Robertson, who’s developing the property, says people still come to the spring daily, seeking its curative waters. “I’ve seen people out here with 20-gallon jugs,” he says. “I know of one couple that comes from Raleigh every two weeks to get their water. Another woman told me she’s had a sleep problem for two years and that she’s tried everything. Someone told her to drink this water; she tried it, and now she sleeps like a baby.”

It’s stories such as those that fuel Robertson’s enthusiasm for developing the property. And because he knows he’s been doing his part to preserve a valuable slice of Surry County history, Robertson’s been sleeping soundly.