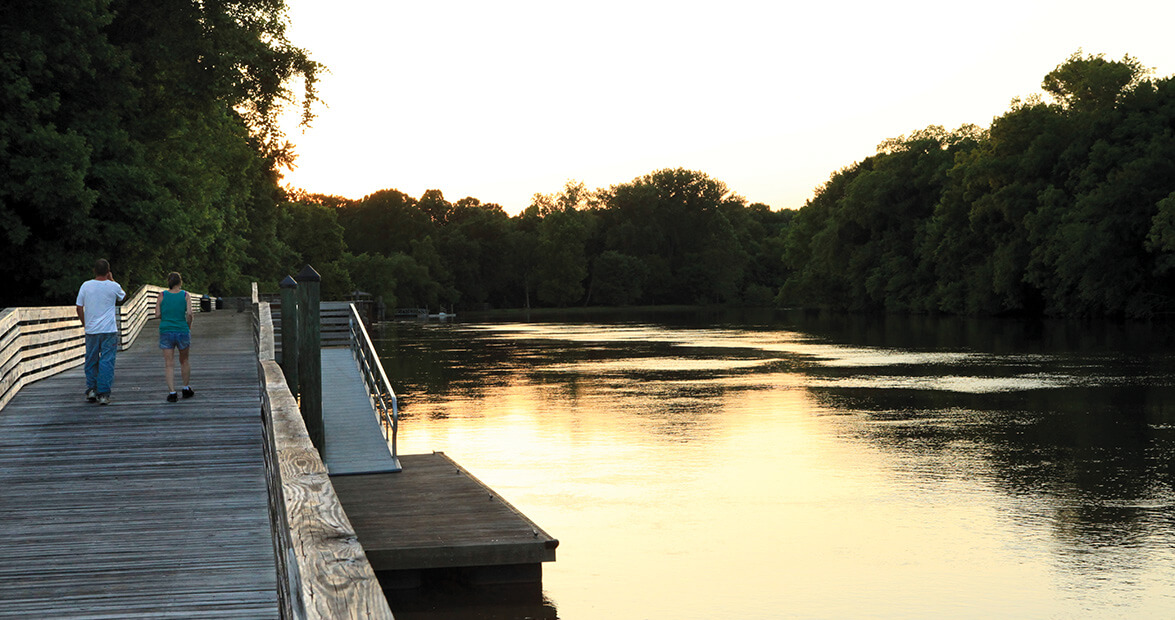 The forest rises along Williamston’s eastern border like an ancient keeper of time. It is quiet here. Often the only sounds are the wind in the trees, the song of birds, and the call of hawks high aloft.

I imagine Tuscarora songs carried with the breeze through the towering pine and cypress. Some of the old-growth woods were living here before the last of the tribe left to live with their Iroquois family in the cold North.

My mother’s house is on Liberty Street, a few hundred feet from where the forest begins. Deeper in there is swamp. Still deeper is the Roanoke River, which the American Indians called Moratoc.

I clean pine straw from her gutters several times a year. I rest on the peak of the roof and listen to the hawks’ call above, and in the evening, the owls, and the Indians. I think about the generations that came later and the ones here now.

The first Europeans came to Williamston in the early 1700s. They settled near ruins of a village named Skewarkee. They shipped tar, pitch, and turpentine downstream.

Today, the 5,500 people who live in this town halfway between Raleigh and Nags Head on U.S. Highway 64 are not too far removed from those first settlers. They still rely on the land, the river, and each other.

I was new to town in 1994 when I took a job as editor of The Enterprise, the newspaper that had been there nearly 100 years. That is when I met Earl Bailey. He started in 1962.

The paper occupied two storefronts on Main Street. The one on the right was the ink-stained shop. Molten lead filled cracks on the concrete floor. A four-unit printing press chugged in the back. That was Earl’s domain.

Step through the back door into the shop these days and he likely will be working on one of the small-job presses. Ask him and he’ll tell how he used to set hot type and print The Enterprise on an eight-page letterpress. He’ll even pull out props he keeps handy for the Boy Scouts when they come around: heavy bars of lead, lines of type, and old, yellowed newspapers.

In its prime The Enterprise was the beating heart of a vibrant downtown. It remains a must-read even though times have changed. “People might complain sometimes about what’s in it,” Bailey says, “but they complain even more if they don’t get it.” And the office remains a center of activity.

A walk upstairs to where bound volumes date back nearly to the paper’s founding in 1899 proves the building had been a hub even before The Enterprise occupied it in 1926.

Bailey points out hand-painted signs on the brick walls from when the room was a pool hall. They urge patrons to pay cash before each game and to refrain from spitting and using profanity. The latter rule may have been only lightly enforced. Just below one “No profanity” sign, another reads, “Cuss all you please. We like it.”

If I had a lot of money I would buy up the empty shops and old places in Williamston and figure out a way to make them like they used to be. I may still do it. Williamston is full of treasures like The Enterprise. One of my favorite places is Katherine Skinner’s house.

Skinner lives in a big, wooden two-story not far from downtown in the historic district. It has a wraparound porch and front and back staircases. Her parents built the house in 1917, and it is among many in town that history buffs admire. She has lived there all her life, save a few years when she went to college and during World War II, when she lived in New York City.

Skinner turned 90 in May but recalls names, dates, and places better than some people half her age, namely me. She has her hair done on Wednesdays and on Sundays, she goes to church two blocks away. Ask her how she is doing and she responds without fail, “I am among those who are present.”

My wife and I bought a home across from Skinner and her husband, Tom, a tobacco exporter, in 1996. Our daughters spent their first years in the Church Street house. Like many of the old homes in Williamston, it was built when the town thrived on tobacco, as it did most of Skinner’s life.

The demise of the tobacco culture left the town and its people looking for ways to fill the void. Leaders worked with state officials to build the Senator Bob Martin Eastern Agricultural Center, a state-of-the-art equine facility and showplace coliseum on 170 acres. The first phase of the facility was completed in 1998, and now it continues to grow among the cotton, peanut, and contract tobacco fields on Prison Camp Road. It attracts rodeos, tractor pulls, and concerts in addition to traditional equine competitions.

The facility enticed chains to build two new hotels, and the town has come up with other ways to help fill them and a half dozen more. One was to build Godwin-Coppage Park, which draws state and regional softball tournaments, says Al Chesson, a longtime city councilman. “You can go down here to the Walmart when one of those tournaments is in town and not see a single person you know.”

Chesson was born and raised in Williamston. His business, A.R. Chesson Construction Company, has grown into a regional enterprise. He knows the town’s challenges well. It’s one of the state’s poorest places, he says, but its community spirit is strong.

He was among 50 people who surprised their friend Jennifer Harris recently for a Martin County “yard crashing.” Harris, who is battling cancer, fell behind on her landscaping, so teams of women, teenage girls and boys, and men refurbished her flower beds, planted vegetables, edged her driveway and walks, trimmed her bushes, and washed her siding and windows.

It’s the type of thing that goes on in a small town like Williamston, Harris says. People help you if you need help, whether you ask for it or not.
“I went to my college reunion,” Harris says, “and a friend asked me what I was up to. I said that I had moved back home. He said, ‘You moved back home? Well, that must be good and bad.’ I said, ‘Yes, it is good and bad. The bad part is that everybody knows your business. And the good part is, everybody knows your business.’ ”

Williamston’s tightly knit fabric of community is woven tighter still by family ties, folks said at the yard crashing. The first admonishment newcomers get is, “Be careful what you say about people because the people you’re talking to might be related.”

Karen Kelly, the minister at First Christian Church, reminded me of that when I was asking her what she thought set Williamston apart from other towns. She came here three years ago and people have embraced her. It may be that because so many people in Williamston are related, they treat you as family, even if you are not.

Those family ties draw many of the town’s children back to Williamston after they thought they had moved away for good. Lucia Peel, a Raleigh attorney and lobbyist, came back home in 2003 to start Haughton Hall Bed & Breakfast, a venture cooked up with her mother to keep the family footing in Williamston and contribute to its revival.

Growing up, the town was her playground. “If I fell and scraped my knee, I’d knock on the closest door and somebody would clean me up and put a Band-Aid on it,” she says. “If we were hungry, somebody would give us something to eat. It didn’t matter; we were related or knew everybody.”

Haughton Hall backs up to my old house, and Lucia Peel is Katherine Skinner’s cousin once removed. William Manning, Skinner’s grandfather and Peel’s great-grandfather, owned The Enterprise. Manning’s son, Francis, was the revered editor in whose footsteps I did my best to follow.

Peel took me to Woodlawn Cemetery not far from Haughton Hall to see the grave of her grandfather, Elbert S. Peel, who was a lawyer as well. To his right lies his wife, Fannie Myrt Manning. To his left, in the Hardison family plot, is Fannie Myrt Williams Hardison. “I bet my grandfather is the only man in the state buried between two Fannie Myrts,” Peel says.

Peel is chairwoman of the Roanoke River Partners, a nonprofit that works to tap the potential of the region’s natural, historic, and cultural resources. The group has developed a paddle trail that allows outdoor enthusiasts to row the Roanoke River from Weldon to the mouth of the Albemarle Sound, camping along the way on raised platforms in the forests and wetlands. The trail cuts through Roanoke River National Wildlife Refuge, which includes some of the oldest trees in the country, not to mention snakes, bears, deer, and many types of birds.

One of the platforms is just south of Moratoc Park, near the Williamston landing, where fishers launch their boats to catch the Roanoke’s famous striped bass. Efforts are underway to develop the area further and connect it to a rail-trail that leads to downtown less than a mile away.

People from around the world have visited the town because of the paddle trail and the river, Peel says, and that is only a portion of what the area has to offer.

I moved from Williamston in 2004. My wife and I had both taken jobs in Greenville by then and we could not keep our feet in both worlds. But my mom had followed us to Williamston and then stayed. Other ties are hard to sever, too.

It can still take me 30 minutes to get her milk at the grocery store because people want to stop and say hey. Men on back roads still wave to me from their pickup trucks even though they don’t know me.

Time has not hurried the town, and most people here say that is just fine. A lot can be gained in the present by holding on to what’s good from the past.

Sometimes I would like Mother to be closer, but at least folks in Williamston know her business, and they will help her if she needs a hand.
And when I visit I can find a little peace and listen to the wind in the trees.