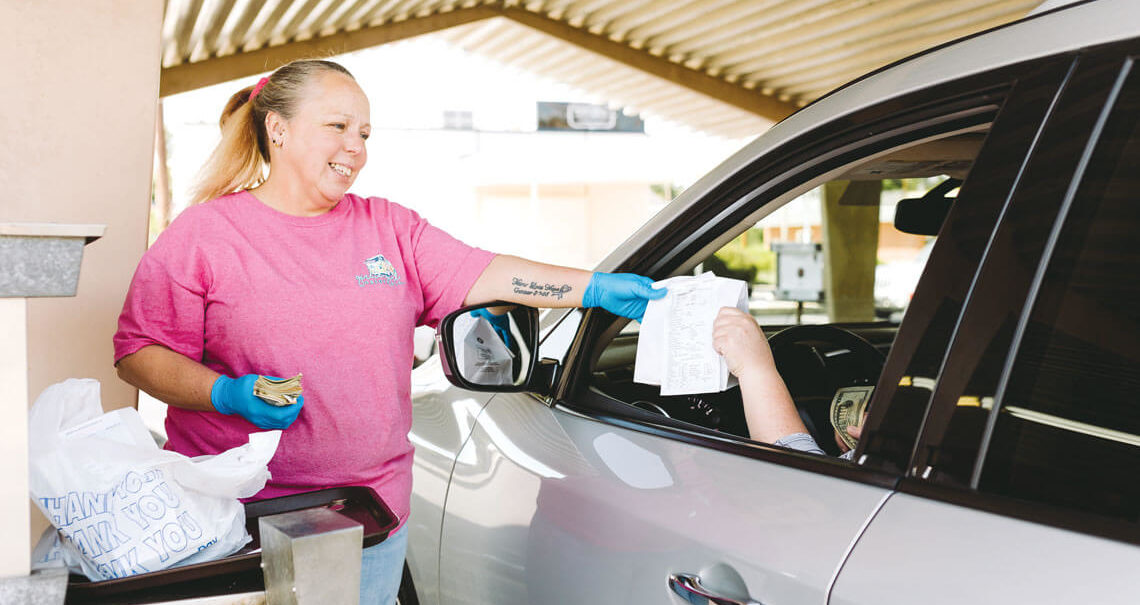 It’s Wednesday lunch hour at What-A-Burger No. 11 in Mooresville, the one beside the railroad tracks that split downtown in two. The Jetsons-era sign is a tower of images: a star, a fully dressed cheeseburger, a Cherry Lemon Sun Drop logo, a pig emblazoned with “PIT BAR-B-Q” in neon, and a flashing arrow in case you miss all the other stuff. Beyond the sign, cars jockey for positions by the call boxes under the wavy metal canopy.

On one side, a group of touring motorcyclists headed to Little Switzerland are milling around, waiting for their burgers and pulling out phones to settle the question that a lot of out-of-state visitors ask: “Is this the same as the Whataburger in Texas?”

Put down your phones, guys. We can answer that: nope. Texas has Whataburger. North Carolina has What-A-Burger. And, to make sure that you’re thoroughly confused, Virginia has a completely different What-A-Burger.

In the food world, the difference between Texas and North Carolina isn’t just 1,200 miles and whether you consider beef to be a legitimate form of barbecue. There’s also the difference between two dashes and a capital A. Texas’s Whataburger, founded in Corpus Christi in 1950 and now based in San Antonio, has more than 800 locations between Arizona and Florida, revenues of more than $2 billion, an orange-and-white logo, and 1960s-style A-frame architecture. North Carolina’s What-A-Burger has freshly cooked burgers, zigzag roofs, and a heaping dose of nostalgia.

Founded in 1956 by E.L. Bost and C.W. Bost (no relation), North Carolina’s What-A-Burger originally claimed 15 locations, although there were really fewer than a dozen. Only a half-dozen remain, mostly north of Charlotte around Concord, Kannapolis, and Mooresville. Several are no longer connected to the Bosts, including one in Whiteville and another in Greensboro, which now operates as Church Street Café but still calls its burgers What-A-Burgers. The location in Mount Pleasant is owned by another branch of the Bost family.

Mike Bost, E.L.’s 71-year-old son, still runs the four locations in the Charlotte area. “I like to say the four of them run me,” he says with a laugh. 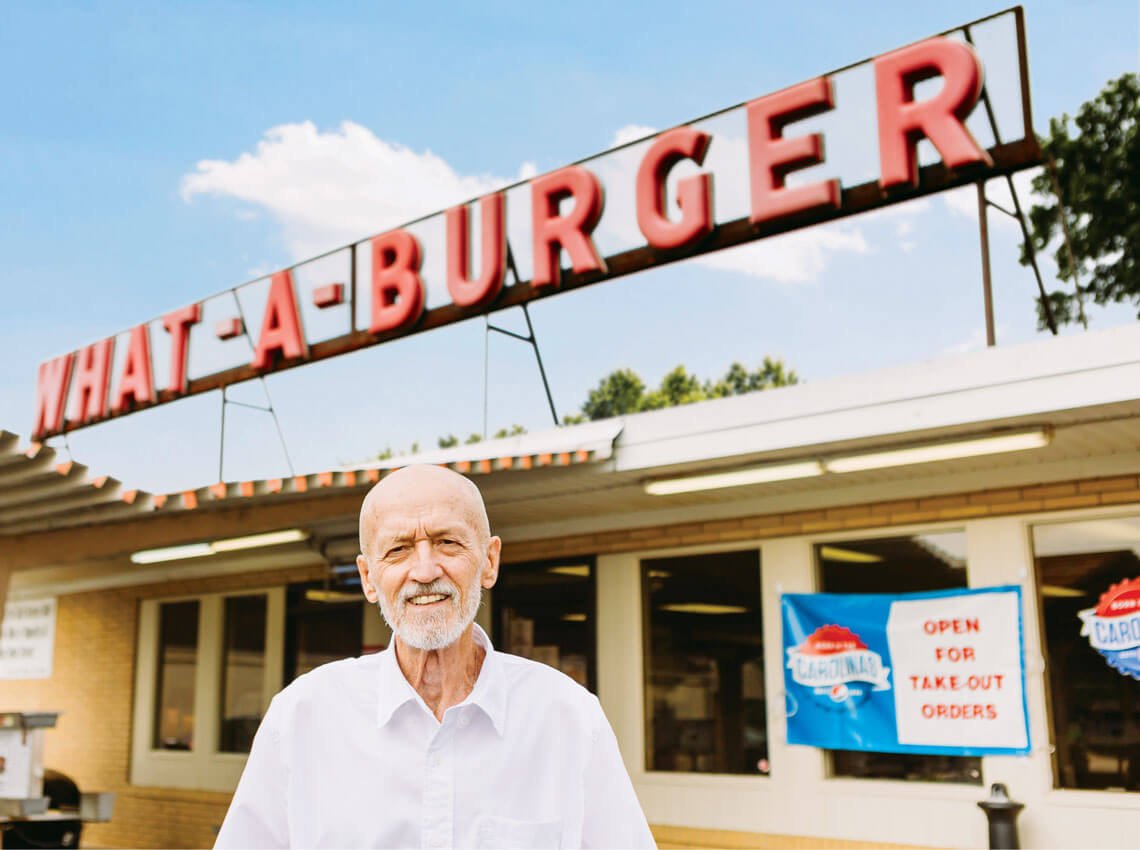 Mike Bost had job prospects when he graduated from UNCC in 1970. But his father, What-A-Burger founder E.L. Bost, needed him to help run the family business. photograph by Joshua Vasko

To be clear, a drive-in isn’t a drive-through. A drive-through is about speed and reliability — menus like McDonald’s that are packaged for convenience, designed to get you back on the road fast. Drive-ins recall the days when driving was still special, when cars had style and substance.

Drive-ins, where you can pull up, park, and order — by speaker or from a carhopping server — became popular in the 1950s and ’60s, when homes weren’t air-conditioned, when we didn’t have hundreds of streaming channels to watch, and when just driving around was considered good entertainment. Drive-ins were built for cars with front seats as big as couches, so you could sit at the restaurant in a freshly waxed vehicle and wave to your friends while a carhop brought out burgers and shakes that you could eat from a tray right at your open window.

The drive-through made the drive-in mostly obsolete. And yet a few drive-ins hang on, mostly in small towns or on the outskirts of cities. The majority, like What-A-Burgers, have seen better days: The call boxes have aged to a powdery gunmetal gray, and the trays that once swung over to your window are battered and now hang at an angle, too low to be of much use from the window of an SUV or a minivan. Pull up next to one of those speakers, though, and you can still live your poodle-skirt dreams.

At the Kannapolis What-A-Burger on North Cannon Boulvard, the carhop has a little gray in her ponytail, but also a spring in her step as she runs out your order. “A Witch Doctor fix and a little snack for you,” she says cheerfully, dropping off a bag with crinkle-cut fries and a What-A-Cheeseburger in a paper envelope, topped with shredded lettuce, onion, mustard, and a half-dozen pickle slices. Another pickle slice is toothpicked to the top bun, leaving a puckered circle when you take it off. 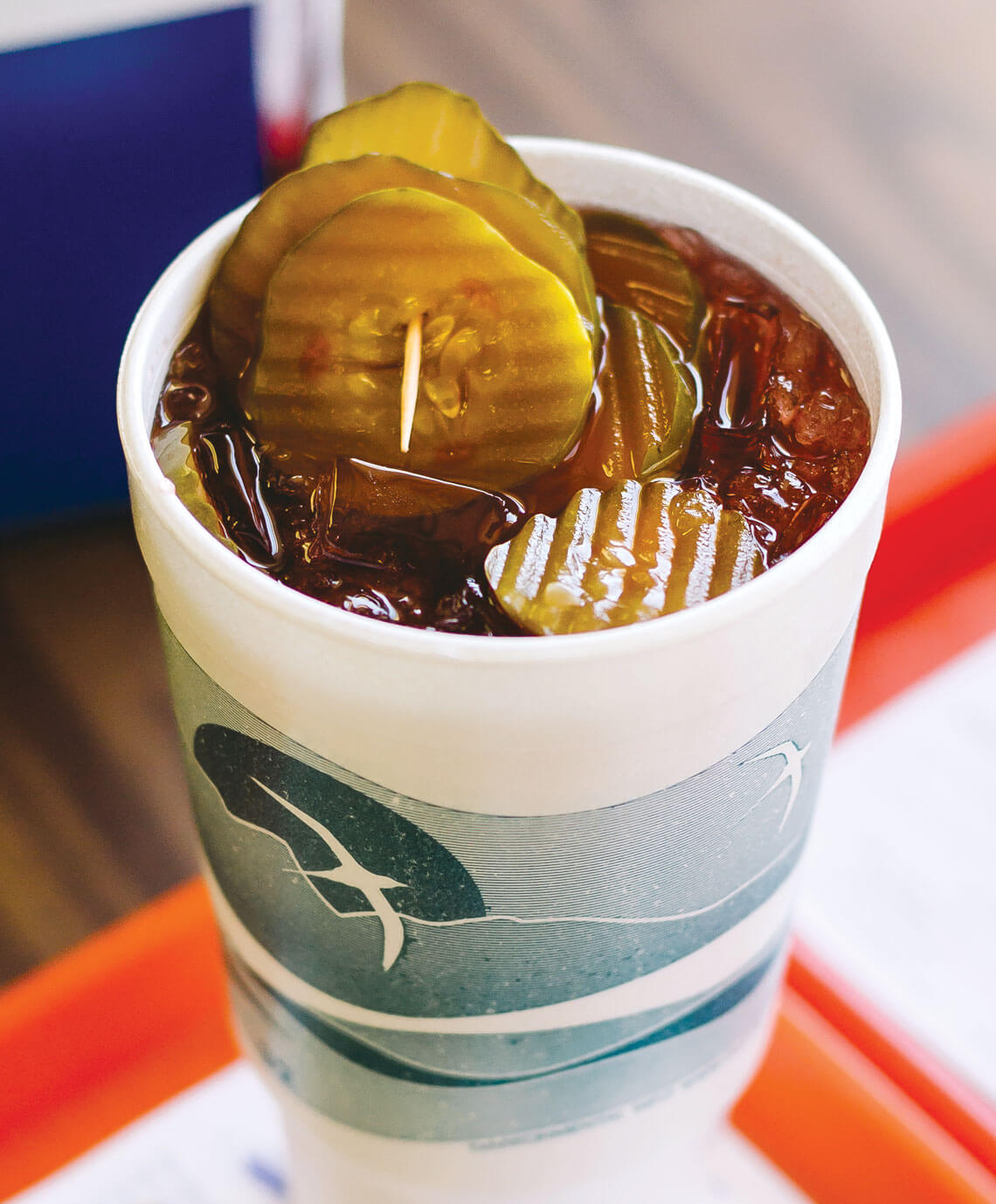 The Witch Doctor may have been named for the 1958 novelty song by David Seville, but no one knows for sure. photograph by Joshua Vasko

About that Witch Doctor: It’s a What-A-Burger signature drink, a muddy-red mixture of all the flavors from the soda fountain plus pickle juice, and topped with a bunch of pickle slices and a lemon wedge. It tastes grassy, sweet, and vinegary, like putting coleslaw on a slice of cherry pie.

No one is completely clear on how the Whataburger/What-A-Burger coevolution happened. E.L. Bost, who went by Eb, started in the restaurant business in Augusta, Georgia, with a couple of small spots, the No. 1 Drive-In and the Varsity. There was another local place called Lottaburger, so Eb may have been inspired to start calling his own large burger on a five-inch bun a What-A-Burger.

In 1956, Eb partnered with his friend C.W. and opened a What-A-Burger in Kannapolis, soon adding more locations. But the closest bakery didn’t make the five-inch buns he had been using. “He would haul five-inch buns all the way from Augusta up here until they started making them here,” Mike Bost says.

Meanwhile, an entrepreneur named Jack Branch started a small chain in Virginia, also named What-A-Burger, while Harmon Dobson opened the first Whataburger in Corpus Christi. Branch and Dobson didn’t find out about each other until 1970. According to some sources, they discussed a licensing agreement but decided to just let each company continue to exist. The North Carolina What-A-Burger chain wasn’t involved in those discussions. Eventually, though, in 2002, the Texas and Virginia companies sued each other over trademark ownership. The court ruled in 2004 that there was no issue because consumers weren’t likely to be confused by the two companies. The Bosts weren’t part of the case, but the ruling meant that they also got to keep their name. 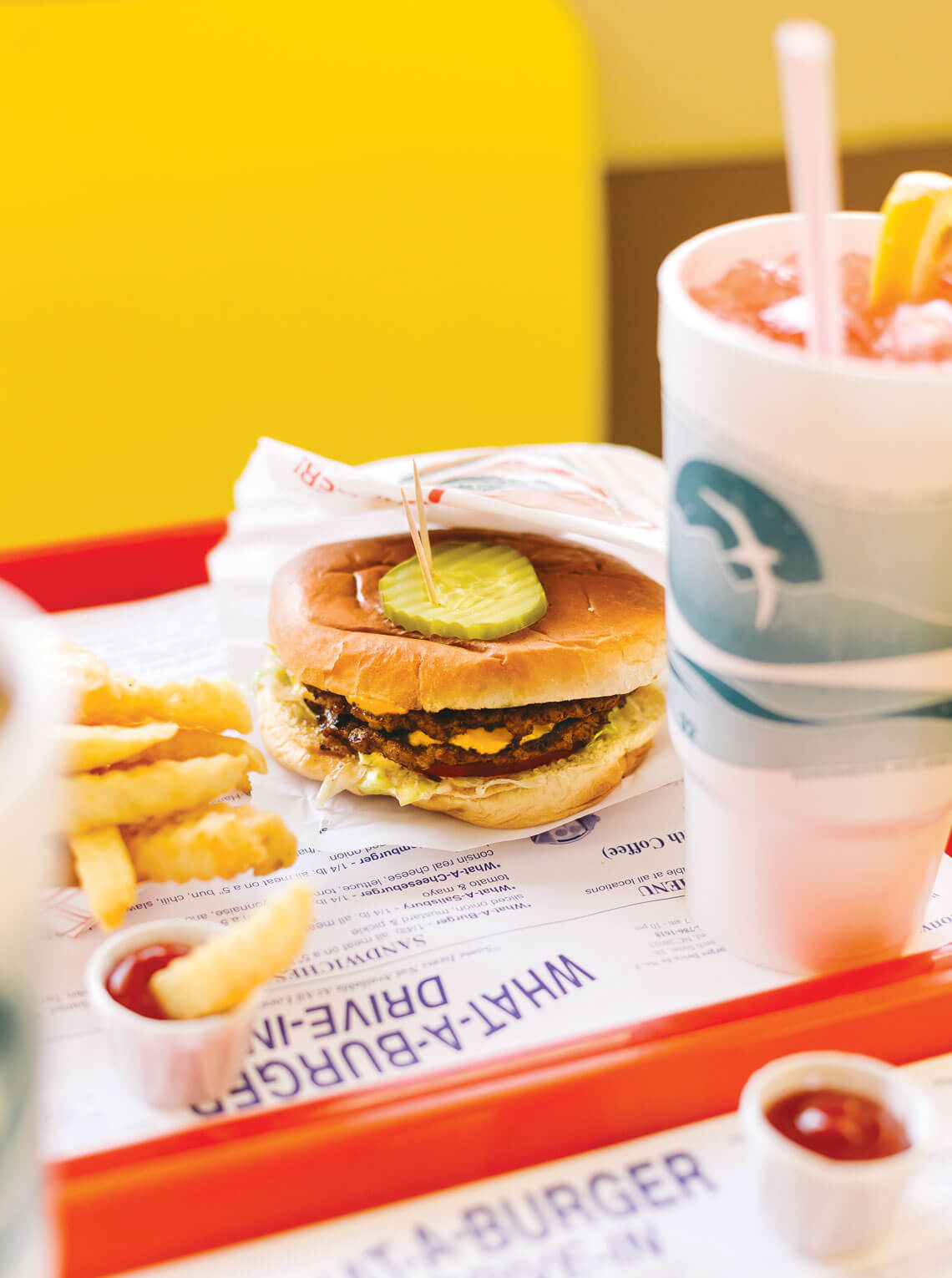 You can still order a Double What-A-Burger with crinkle-cut pickle slices. photograph by Joshua Vasko

Interpreting the menu at a North Carolina What-A-Burger sometimes takes help from a local: The What-A-Burger and What-A-Cheeseburger are larger than the regular hamburger and cheeseburger, and they come with pickles, lettuce, tomato, onion, and mustard. “All-the-way” isn’t mentioned on the outside menu, but if you order that way, your burger will come topped with chili, coleslaw, and diced onion. All “What-A’s” consist of a four-ounce patty on a five-inch bun.

There are other menu items, too: fish sandwiches, barbecue platters, chicken wings, hot dogs, and the like. And different locations have slight variations.

No matter what the menu says, though, Mike Bost promises that you can get your burger however you want it. “We’ve kept the menu the same all these years,” he says. “When we started, people would order a sandwich and it was ‘lettuce, tomato, mayo.’ People, over time, they want it how they want it.”

Maybe that’s the secret to the continuing allure of the drive-in: In unpredictable times, it’s nice to know that you can still start your car, drive a little way into the past, and have it your way. 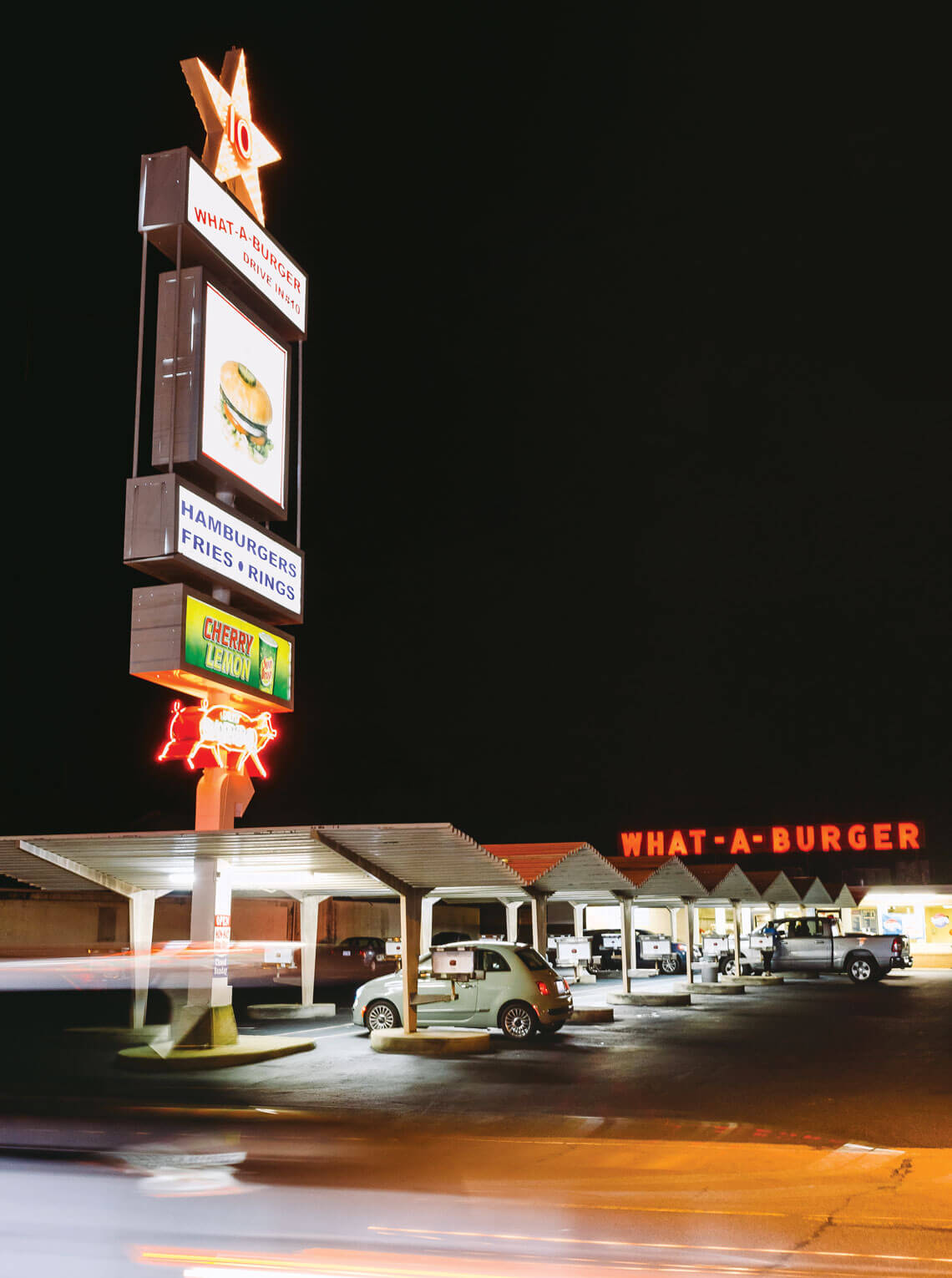 The cars are different — tiny Fiats instead of big, sleek ’65 Chevys — but the What-A-Burger on Main Street in Kannapolis hasn’t changed much in more than half a century. photograph by Joshua Vasko