Provision Company — called “Pro Co.” by locals — has been a mainstay in Southport since 1993. Originally a small shack where beachgoers could walk in and grab what they needed before hitting the water, Pro Co. maintains its laid-back feel, as the restaurant is known for its self-serve bottled drinks. “It’s like being at your friend’s house at a cookout — you go to the cooler and grab a drink,” says Manager Paul “Shorty” Tilling. Then you pay on your way out, no questions asked. “People come back for the great food, but especially because we treat them like family.” Want to order like a regular? Make sure you ask for “Thee Special” — a half-pound of steamed shrimp served with a local deviled crab cake and corn or house-made cucumber salad. While you’re chowing down, keep an eye out for Iggy the egret, the restaurant’s unofficial mascot — around 3 p.m., he often makes an appearance on the dock. — Anna Grace Thrailkill 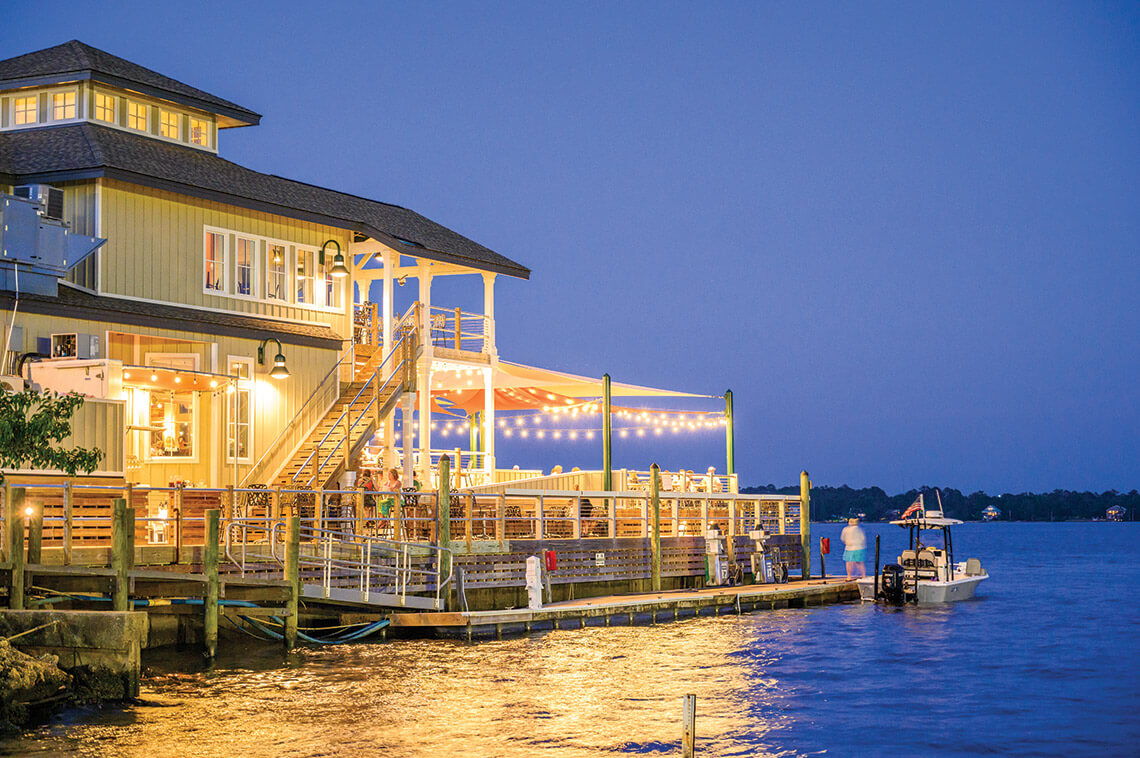 Much of Persimmons was built using reclaimed materials, including some found when the owners had the neighboring marina dredged: a persimmon log, which gave the restaurant its name, and a log of red gum, which became the tabletops. photograph by Chris Council

On Thursday and Sunday nights in the summer, boaters in New Bern dock at Persimmons Waterfront Restaurant hoping to grab a table on the deck for live music from mostly local bands, a delicious meal, and an unencumbered view of the Neuse River. Seafood fans dive into shrimpburgers or the crispy local sea bass, while landlubbers enjoy Southern favorites like tomato pie or sweet-corn-and-pimento hush puppies. When the Craven County restaurant was being built prior to opening in 2010, its owners found submerged logs at the neighboring marina that they believed dated back to the 19th century, when the Pollock Street location was home to a lumber mill and turpentine distillery. They salvaged a log that was cut from a persimmon tree and had it milled into their host stand, one of the first things that guests see when they arrive. — Katie Kane

Chef Heather Mitchell was entering a customer’s order at Edenton Bay Oyster Bar one day when, out of a picture window, she saw an osprey swoop down and pluck a fish out of Pembroke Creek. Once a showroom for boat sales, Edenton Bay Oyster Bar is mere feet from the water. “You step off of our patio, and you step onto the dock,” Mitchell says. As much as possible, she sources her ingredients locally and seasonally, depending on what comes off the boats that day. Her take on oysters Rockefeller, called Southern Oysters Rock, combines the delightfully salty flavor of the sea with some of North Carolina’s land-based favorites: collard greens, bacon, and Texas Pete. Boaters often order a dozen each of her specialty oyster dishes, which also include BBQ, Grilled Cheese, and Sushi flavors, served on the half shell. — Katie King

Almost all of the seating at Dockside in Wrightsville Beach is outside on upper and lower uncovered decks. But with floor-to-ceiling glass windows in the upstairs interior dining room, every seat in the house offers a spectacular panorama of the Intracoastal Waterway — including Mott’s Channel and the Wrightsville Beach drawbridge. “The prize here is the view,” says Manager Virginia Wade. Housed in the former Gulf Terminal service station — where boaters could fuel up, shop for fishing supplies, and grab a bite to go in decades past — the restaurant serves up fresh seafood dishes paired with beachy cocktails like frozen daiquiris. Locally caught options include the clams casino, with bell peppers from Dockside’s own farm, when available. — Rebecca Woltz

Dishes at Saltwater Grill — like the yellowfin tuna with wasabi butter — change regularly based on what comes fresh off the local fishing boats. photographs by Charles Harris

With just eight feet separating the restaurant from the water, the only thing better than the views at Saltwater Grill is enjoying them with a plate of fried shrimp or oysters. Boaters dock at this Bogue Sound watering hole to enjoy locally sourced seafood in the sunshine or from the comfort of the shade and air-conditioning. “There’s not a table in the restaurant where you can’t see the water,” says General Manager Betsy Berndt. “We’ve got the best view in Swansboro.” Try the Angels on Horseback, a popular twist on a surf-and-turf platter featuring Atlantic shrimp, scallops, and crab wrapped in bacon and served over risotto and asparagus — all complemented by the scenic backdrop and, on special occasions, live music from the waterfront stage. — Hallie Milstein

Skiffs, sailboats, and luxury vessels alike make their way along Taylor’s Creek toward the red-and-blue canopies and string lights that mark Moonrakers’ popular rooftop bar. Boaters who’ve disembarked for a meal often find themselves taking in the view of the islands that make up the Rachel Carson Reserve across the creek while sipping one of the restaurant’s frozen margaritas or nautical-inspired libations, like the Spi-Sea Fresca — a tequila cocktail with jalapeño, agave, and lime. The menu at this three-story dining spot, located in Beaufort’s historic district, celebrates Carolina coastal cuisine with a wide selection of seafood dishes, including shrimp and grits for dinner and cornmeal-crusted oysters served with black-eyed peas and country ham for brunch. — Katie Kane 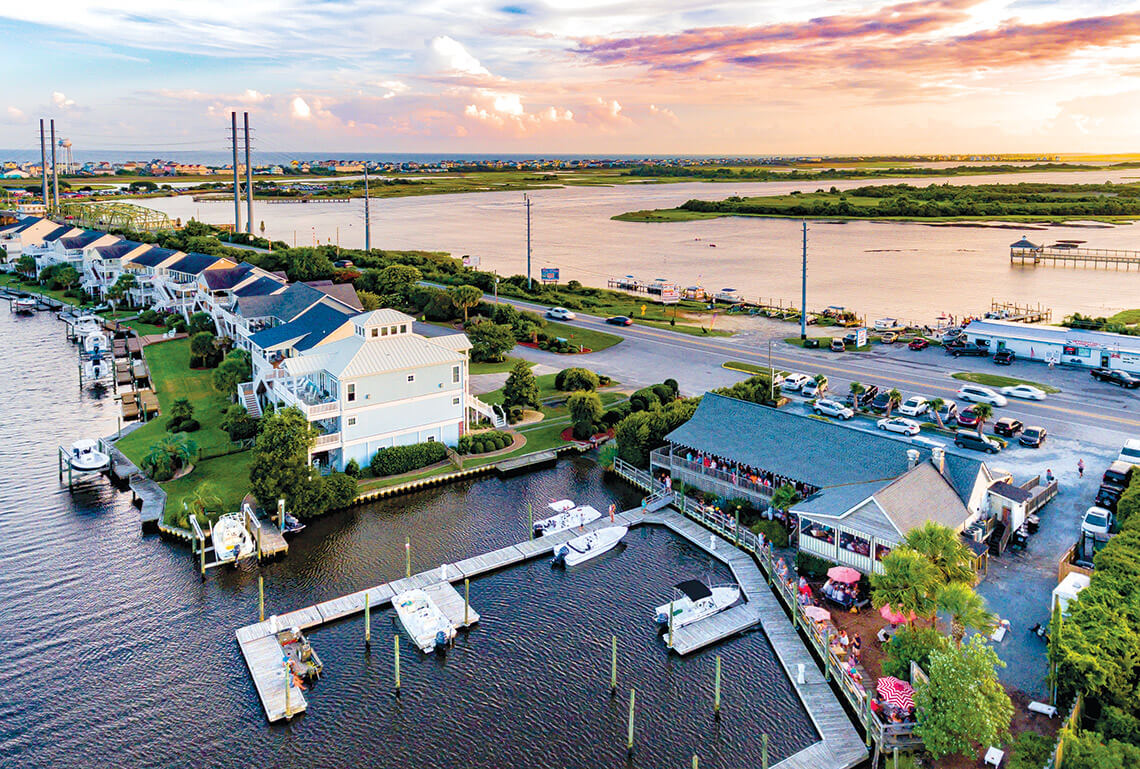 On the mainland side of the Surf City Bridge, Sears Landing welcomes diners by land and by water. photograph by JEFF WENZEL

According to a legend passed down through the generations, many years ago, a pirate left his ship to establish a trading post and operate a pole barge ferrying people to Topsail Island. Today, Sears Landing sits on the site of that trading post in what is now Surf City. The restaurant serves breakfast, lunch, and dinner indoors and outdoors on a covered deck overlooking the Intracoastal Waterway. Diners can enjoy cocktails in rocking chairs on the porch while waiting to be seated, and pups are welcome at the dog-friendly picnic tables. Meals are best started off with the peel-and-eat shrimp, dipped in Sears Landing’s house-made, horseradish-heavy cocktail sauce. — R.W. 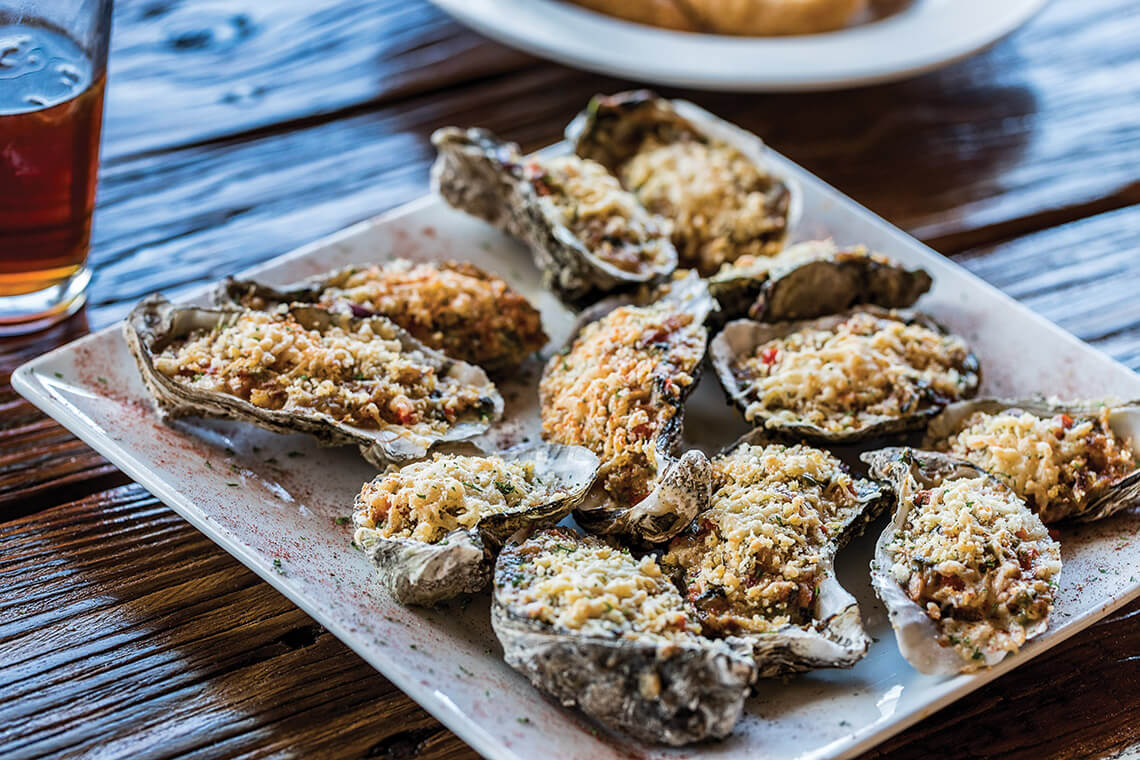 The shellfish in owner Sammy Boyd’s oysters Rockefeller arrive at Southern Salt from his aquaculture farm five miles away. photograph by Charles Harris

When you step in a seafood restaurant, the last thing you want to hear is, “We’re out of oysters” — but at Southern Salt, those words might be an opportunity for adventure. Owner Sammy Boyd also runs an aquaculture business that’s a five-minute boat ride from the Carteret County restaurant. “Sometimes, I’ll take customers out to the farm to get their own seafood,” Boyd says. “It doesn’t get fresher than that.” At Southern Salt, everything from the food you order to the tables you eat it on — made of reclaimed wood from the dock behind the restaurant, originally built in 1938 — is an homage to how waterfront seafood restaurants used to be. “When I was growing up, I could order local seafood that was caught that day, and as I got older, seafood started coming from farther and farther away,” Boyd says. “I decided that I was going to bring fresh seafood back to the table.” — A.G.T.

On the Pamlico River, just downstream from Little Washington’s historic waterfront, boaters and kayakers navigate their vessels under the Runyon Creek Bridge near Jack Creek and tie up at the boat ramp. Backwater Jack’s — a Margaritaville-esque spot for waterfront meals and live music — welcomes them by road or by river, in bathing suits and cover-ups. The second floor offers views of the river, but on spring and summer evenings, soak up the lively tiki bar atmosphere near the stage at the gravel-covered patio, “Pebble Beach,” where bands play every weekend. — Katie Schanze

Customers gaze out over the dock, watching a pelican search for fish in the wake of passing boats, as they dig into their own meals of Calabash-style seafood or local favorites like the Mac-n-Cheeseburger or chicken and waffles. Nearby, the Holden Beach Bridge frames a summer sunset over the Intracoastal Waterway. “I love to watch the sunset from the dock every day,” says co-owner Tommy Economos. “It’s always beautiful.” Economos vacationed in Holden Beach all of his adult life. Drawn to the island by its beauty and good company, he started Dock House with his brother and a family friend in 2018. Today, he works alongside his son, making sure to take time each day to appreciate the view. — Rachel Malmin