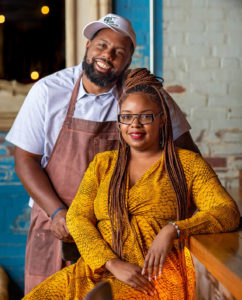 The most important part of Leah & Louise, the Charlotte restaurant that Chef Gregory Collier opened with his wife, Subrina, isn’t the dining room. It’s an area at the very back of the kitchen, in a tight galley space tucked out of sight. There, on three eight-foot-long shelves over a prep table, are dozens of small plastic tubs labeled with scrawls on blue painter’s tape. The contents of the containers sum up the Colliers’ restaurant philosophy: Don’t waste a thing. Make every penny count. “Man, I’m from the South,” Greg says, laughing. “I’m trying to avoid spending money any way I can.”

Those essential tubs hold flavor mixtures that turn up all over the menu and on the plates. There’s sweet potato powder. There’s orange powder, made from dried peels. Parched corn. Sangria puree, which is leftover fruit from sangria, pureed, dried, and now used as a garnish.

One tub has scallion powder, made from the white bulbs of green onions. “Beets & Thangs” is dried beets and, well, some other things that got thrown in. Like maybe dried celery: The restaurant got an extra case of celery in a grocery order and had to use it up. So they dried the extra and ground it up to add a little color and flavor to other mixtures. 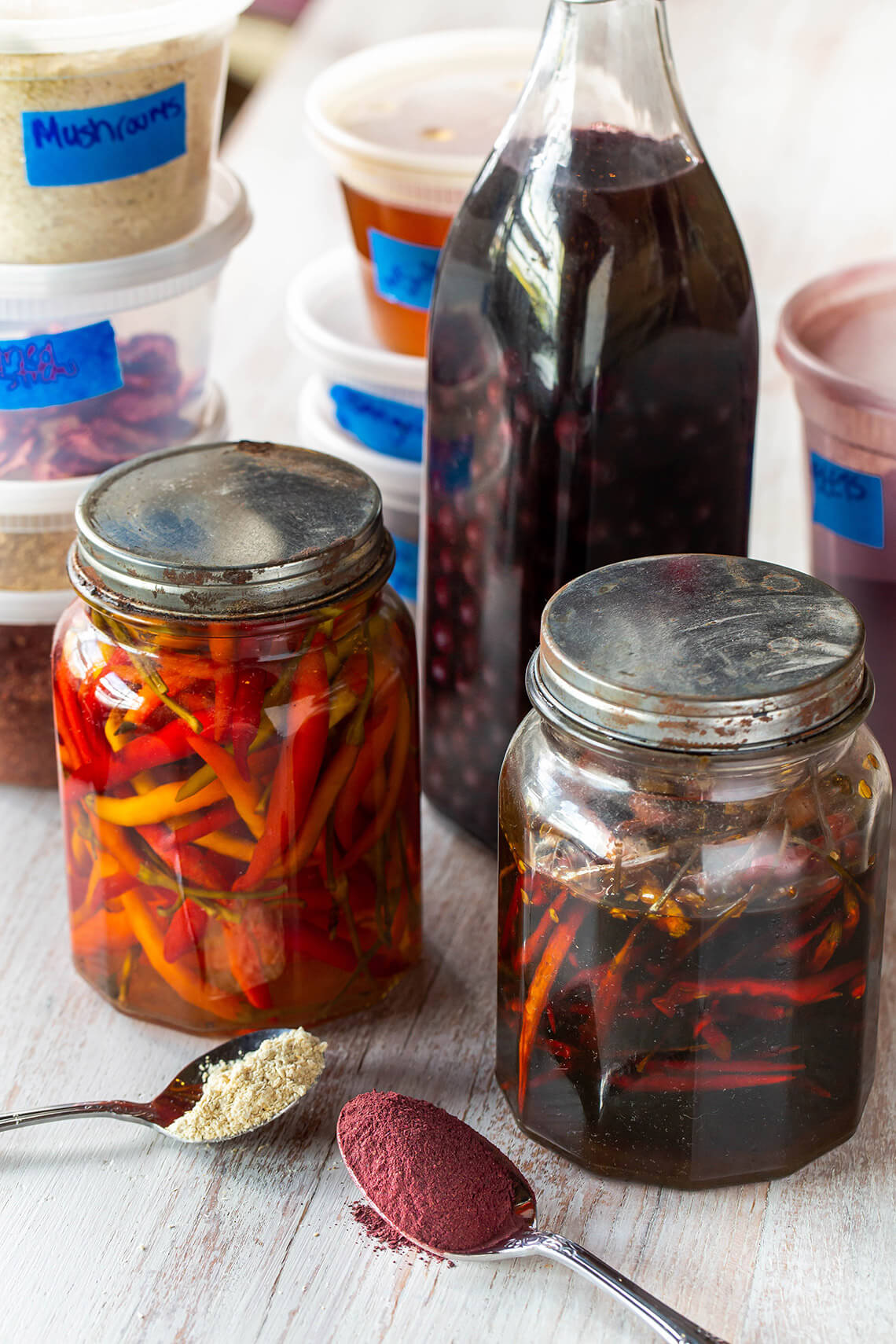 In the glass containers are pickled peppers and blueberries, and in the spoons, powders made from dried mushrooms and beets. photograph by Tim Robison

“Scallop powder” is made from the tough side muscle that you pull off of scallops before cooking them. Greg and his crew saved the muscles in the freezer, dried them, and powdered them. If you lift the lid and sniff, the pearly white dust smells as rich and pleasantly fishy as a tidal pool right after the waves go out.

Some things have become Collier signatures, like BOSS, a mix of dried beet powder, onion powder, ’shrooms (ground-up dried mushrooms), and salt that Greg uses to flavor the Black Cowboy Steak. It’s served with burned-beet barbecue sauce, which he discovered when someone burned a sheet pan of roasting beets. Greg took a taste, noticed the sweet notes and the deep, dark color, and turned them into a sauce. The combination of char and sweet reminded him of Memphis barbecue.

Don’t think of all those powders and concoctions as trash. They’re part of a guiding principle that has brought national acclaim to Leah & Louise. Eight months after opening in Charlotte’s sprawling Camp North End development in March 2020 — right at the beginning of the global pandemic that disrupted the food industry all over the country — the restaurant was ranked No. 2 on Esquire’s list of the best new restaurants in the nation.

For Greg Collier, cooking with pretty much everything he has in the kitchen came from his childhood growing up in Memphis. His granny Louise always had a garden, and nothing went to waste. (The restaurant is named for her and Greg’s late sister, Leah.) “I can’t recall a time when things were thrown away,” he says. “It was a normal thing.” If his grandmother made fried chicken, the leftover cold chicken was eaten for breakfast or went onto a salad the next day. Greases and fats were saved in Folgers cans and used to season food.

Subrina hadn’t been raised that way. Until age 12, she was brought up by a single mother, and since it was just the two of them, her mom cooked in small quantities so that they never had leftovers. Her mother had come up in a big family, and she was happy to give up containers of leftovers.

Learning about Greg’s frugal ways was an education, Subrina admits. She can’t just go through their refrigerator at home and toss things, because he might have plans for them. “We have quart containers everywhere,” she says, laughing. “That’s my life. I’m not the chef; I’m the taste tester.” 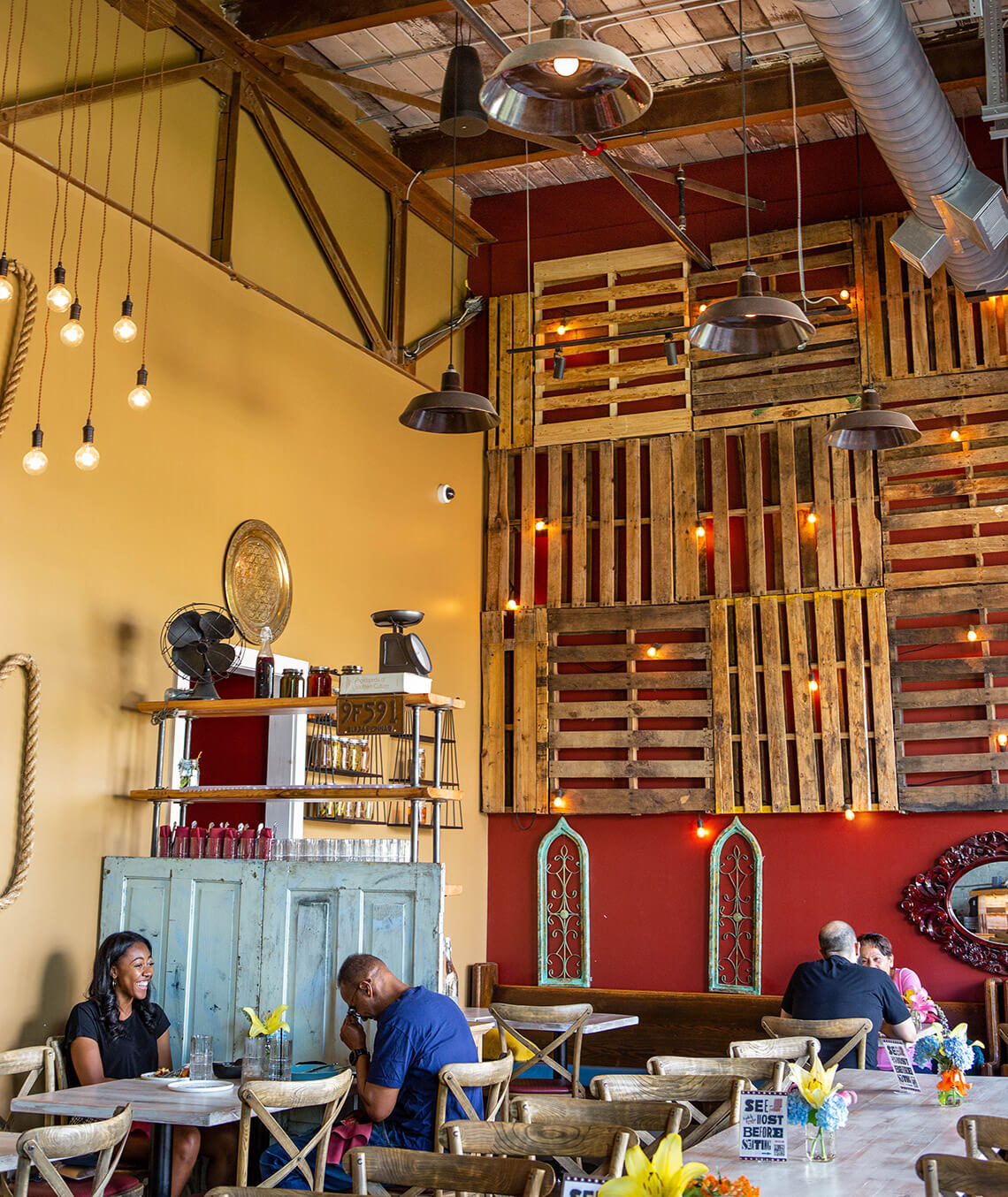 The Colliers wanted their restaurant’s interior to resemble a Memphis juke joint. photograph by Tim Robison

After Greg went to culinary school in Scottsdale, Arizona, and did stints in fine dining at places like The Phoenician resort, his frugal habits came in handy when the couple opened their popular breakfast spot, The Yolk, in nearby Rock Hill, South Carolina. That was in 2012, and the Colliers had so little money that they couldn’t even afford a soda machine. Instead, they’d buy cases of cheap soda and keep them on ice. “People say, ‘Bootstraps and duct tape.’ We didn’t even have that,” Greg says. “We didn’t have anything.”

The budget was so tight that the Colliers couldn’t buy more than a package of bacon at a time. When somebody in the kitchen burned the bacon … well, they couldn’t just throw it away. Instead, Greg came up with burned bacon whipped cream — the fat in the cream dispersed the burned flavor, leaving a smoky taste that was perfect with maple syrup.

By the time the Colliers opened Leah & Louise, Greg’s use-it-all philosophy had become standard procedure. “If I can make money out of waste, I’m a better businessman and a better chef,” he says. “And nobody here has to think about it. They know. Everybody is thinking, ‘We can’t throw this away.’”

That means that Bar Manager Justin Hazelton prowls the kitchen, looking for scraps that he can turn into syrups or powders for cocktails. And when he grinds up almonds to make the liqueur falernum, his scraps go to Pastry Chef Jasmine Macon, who uses them in cookies.

Macon, who hopes to open her own doughnut shop someday, says she’s learned a lot that she’ll take with her. At the doughnut shop where she worked before joining Leah & Louise, they’d toss the scraps of dough. Now, Macon finds ways to turn scraps into fritters or doughnut holes, or she’ll put the extra dough into a loaf pan and transform it into soft bread. 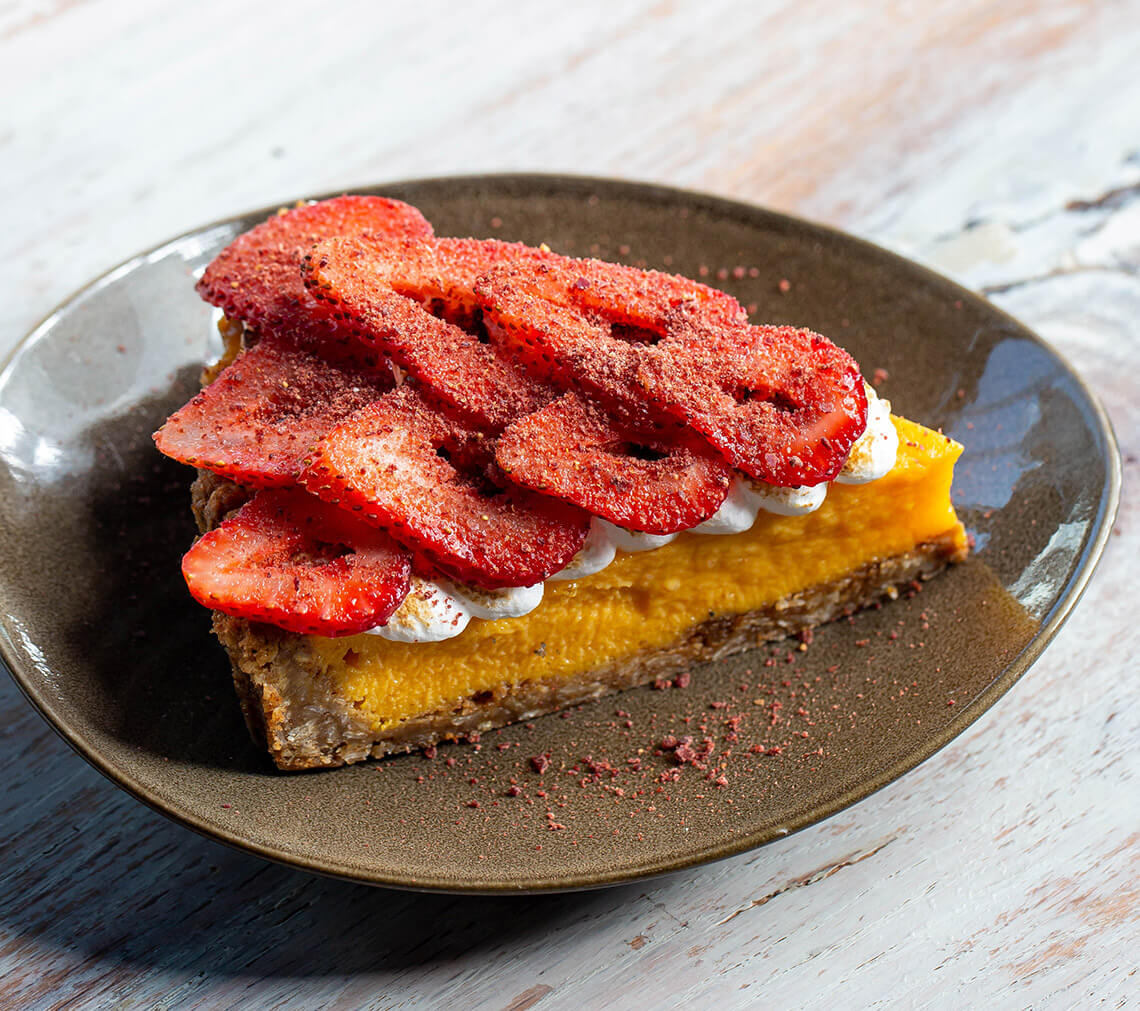 Pastry Chef Jasmine Macon is in charge of creating the after-meal delights — like this sweet potato tart topped with strawberries. photograph by Tim Robison

At Leah & Louise, if the cooks peel 40 pounds of potatoes, they’ll end up with five pounds of skins. If they use those five pounds of potato skins, maybe frying them as a crispy garnish, there’s no waste, and they’re back to a full 40 pounds of ingredients. “Chef really saves everything,” Macon says, “whether we’re pickling or dehydrating or turning it into stock.” Even if she burns caramel, Macon will save it so that Greg can work it into a sauce for duck breast. “He turns it into specials,” she says, “which I think is fascinating.”

This is how creative things can get: When the staff fries chicken, little bits of skin end up floating in the oil. They scoop them out so that the brown bits don’t burn and spoil the oil. But instead of throwing the crispy bits away, they bag them up and stick them in the freezer. The next night, they grind them into a dredge for chicken-fried quail.

Greg sees part of his role at Leah & Louise as mentoring younger Black cooks who will go on to start their own businesses. To him, this is essential training, a skill they’ll take along to improve their bottom lines and make their cooking more creative. “You don’t have to make a decision about how to use it. You have to decide how to make it taste good,” he says. “We can’t afford not to use this. We don’t do it because it’s cute. You should do it because it’s smart. It ought to be canon.”

Chefs have been making kitchen scraps do double duty in restaurants for generations, to make things like vegetable stocks or generate compost for kitchen gardens. Greg takes it a lot further, though. If he gets kohlrabi, he’ll make slaw from the leaves, pickle the stems, and roast the bulbs to serve with cream. If anything is left, another tub is added to the shelves: kohlrabi powder.

The habit is about more than just being frugal. Greg sees it as a way to work within the traditions of Black food culture. Leah & Louise makes a point of buying from African American farmers, who often grow in quantity rather than variety. So if he buys collards, he might have to get two cases. He’ll save the thick collard stems and shred them to add flavor, fiber, and crunch to chowchow. 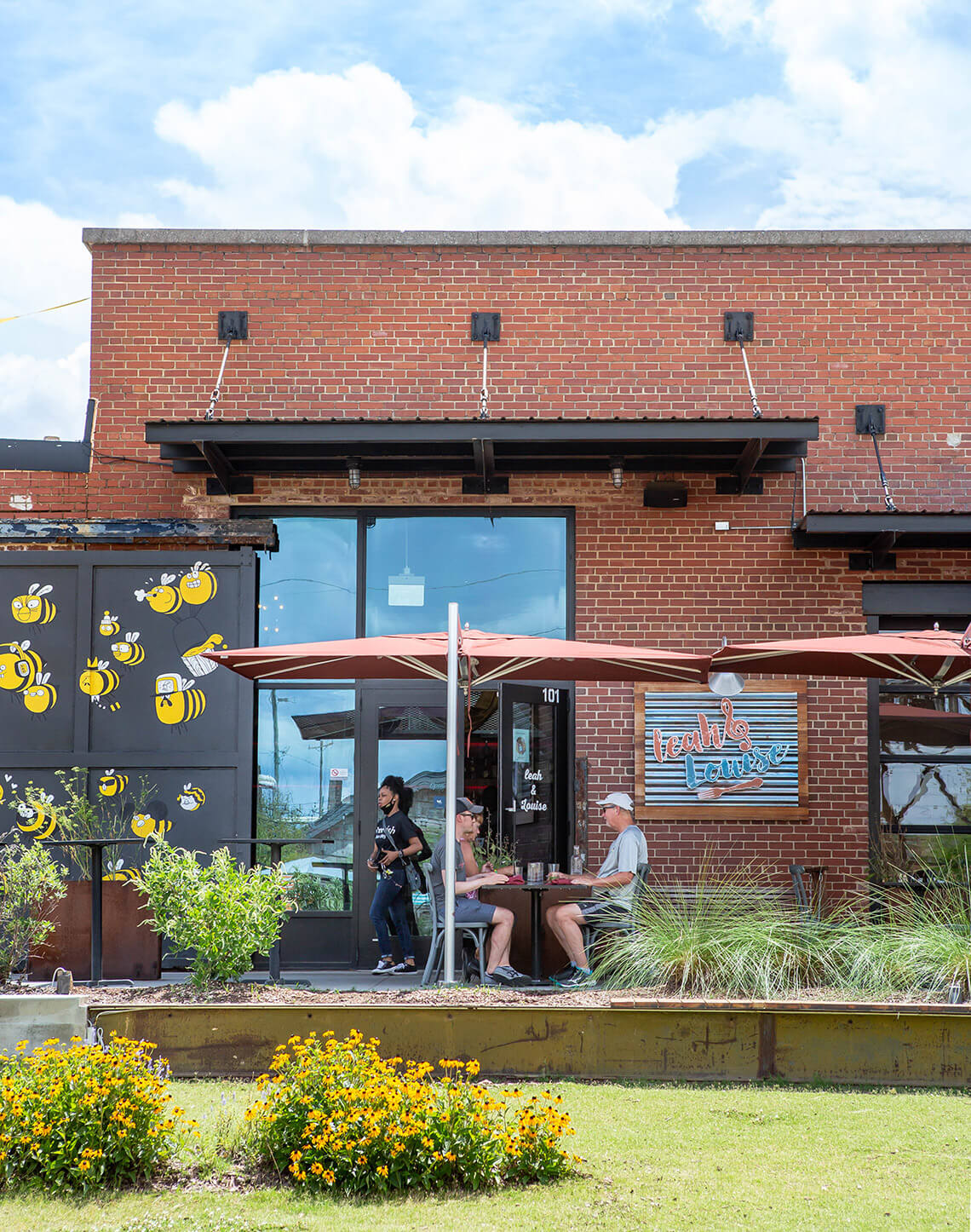 The outside patio looks out at Camp North End, a former factory complex now populated by bars, art spaces, and other restaurants. photograph by Tim Robison

People who grew up the same way that Greg did recognize the flavors and habits of their own parents and grandparents. “It makes me a better ambassador of [Black] culture,” he says. “Black people tend to do traditional, not experimental, fine dining. But I can show you collard stem relish, and you can get that.”

It’s basic agrarian culture, a mindset that’s better for all of us. “All these things are a byproduct of doing things the right way,” Greg says. “We’ve gotten so far from agrarian culture. If you do things as great as you can, the environment is going to be better.”

He cracks a smile. “People talk about it like it’s new,” he says. “People have been doing this in the South forever.”