The tallest sand dune system on the Atlantic Coast (above) covers a staggering 420 acres and is made up of three distinct ecosystems. Even though it’s always shifting, this natural phenomenon’s beauty is never diminished. 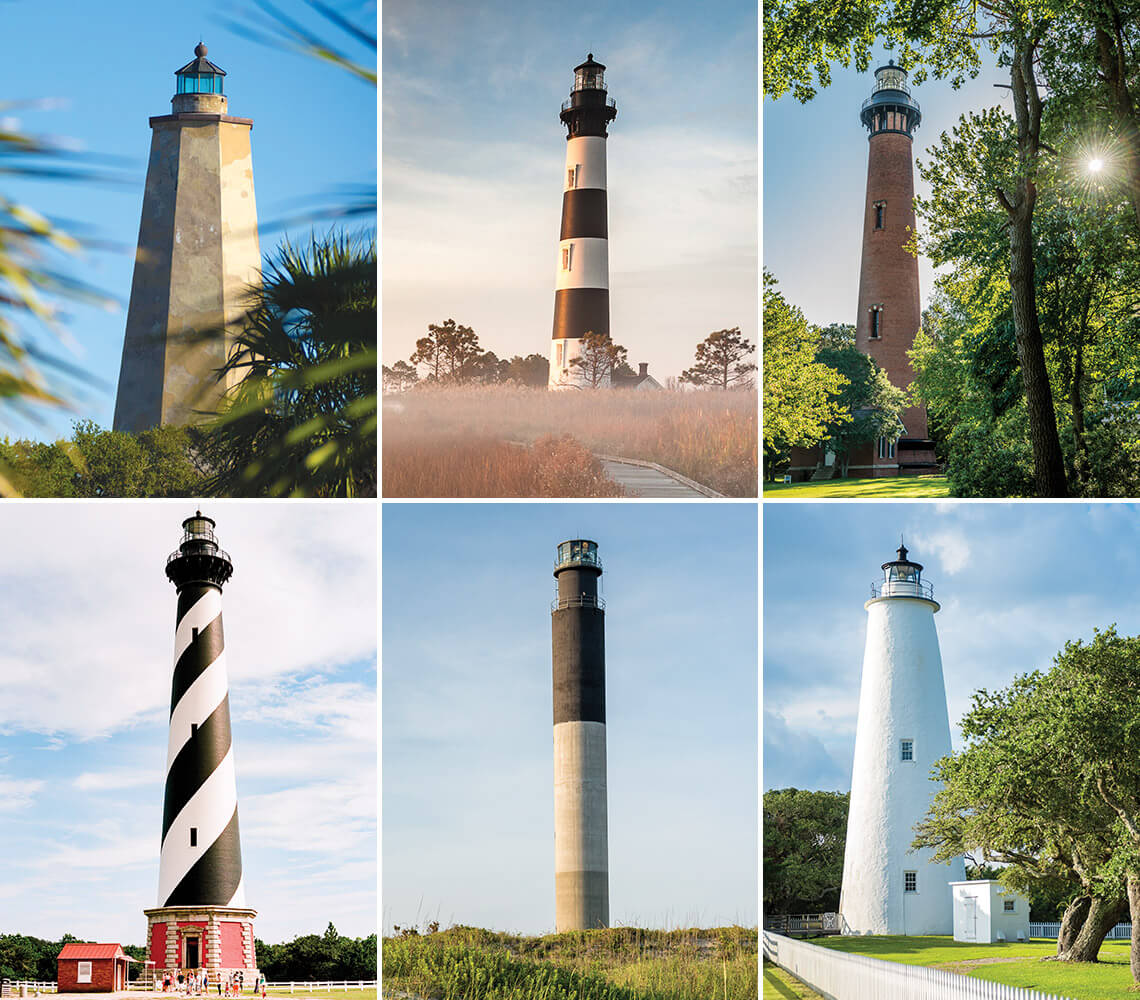 Built in 1817, Old Baldy has survived two centuries, two wars, and its share of hurricanes to earn the title of oldest lighthouse in the state. And although oldest doesn’t always mean best, no one would disagree that being first is an honor worthy of celebration. Old Baldy and six others — Bodie Island Lighthouse, Currituck Beach Lighthouse, Cape Hatteras Lighthouse, Oak Island Lighthouse, Ocracoke Lighthouse, and Cape Lookout Lighthouse — were once guiding lights for sailing ships. Now, they serve as beacons of coastal beauty and history. 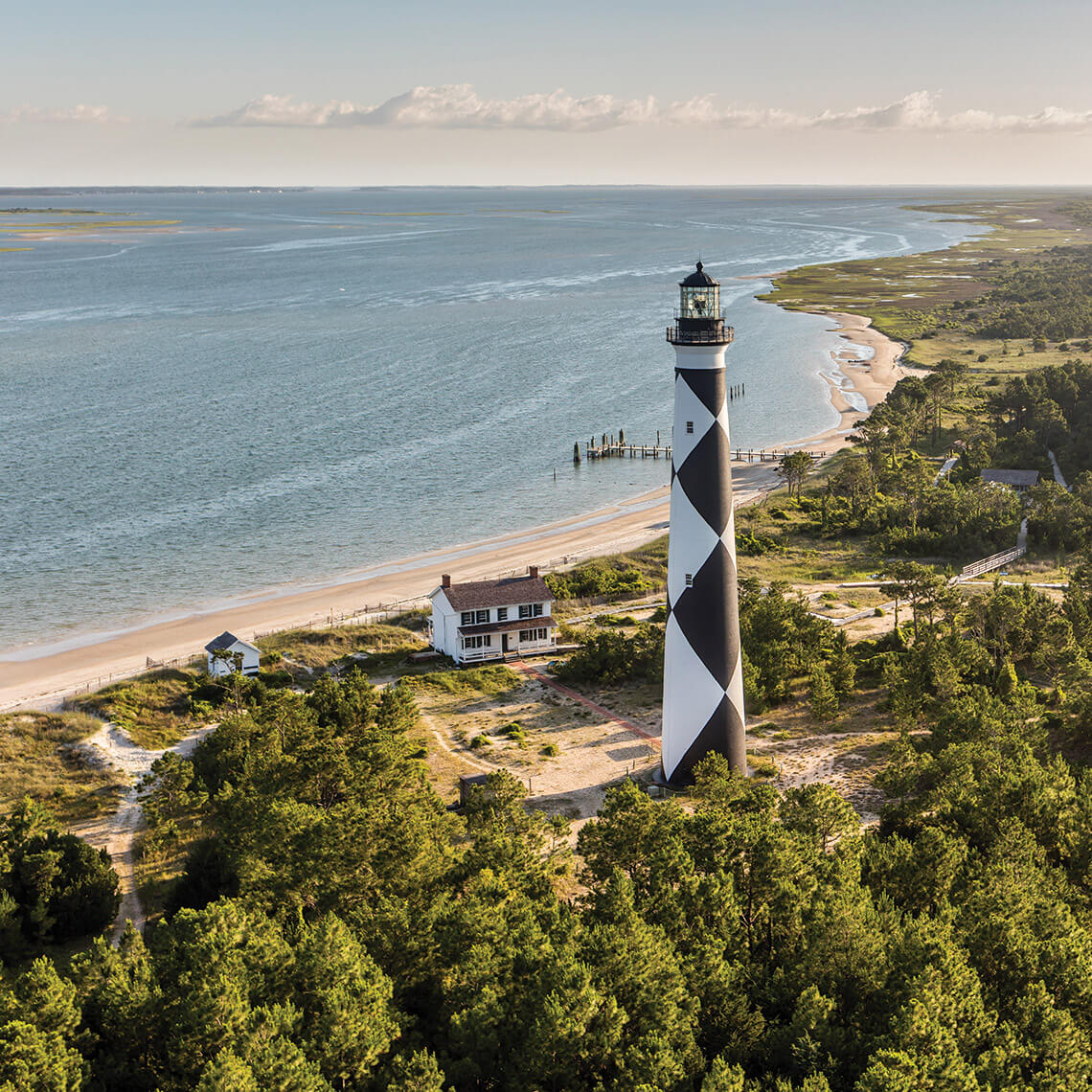 Cape Lookout Lighthouse has been protecting sailors from the deadly Lookout Shoals for more than 160 years. Its distinctive color pattern — known as a daymark — has endured since 1873. 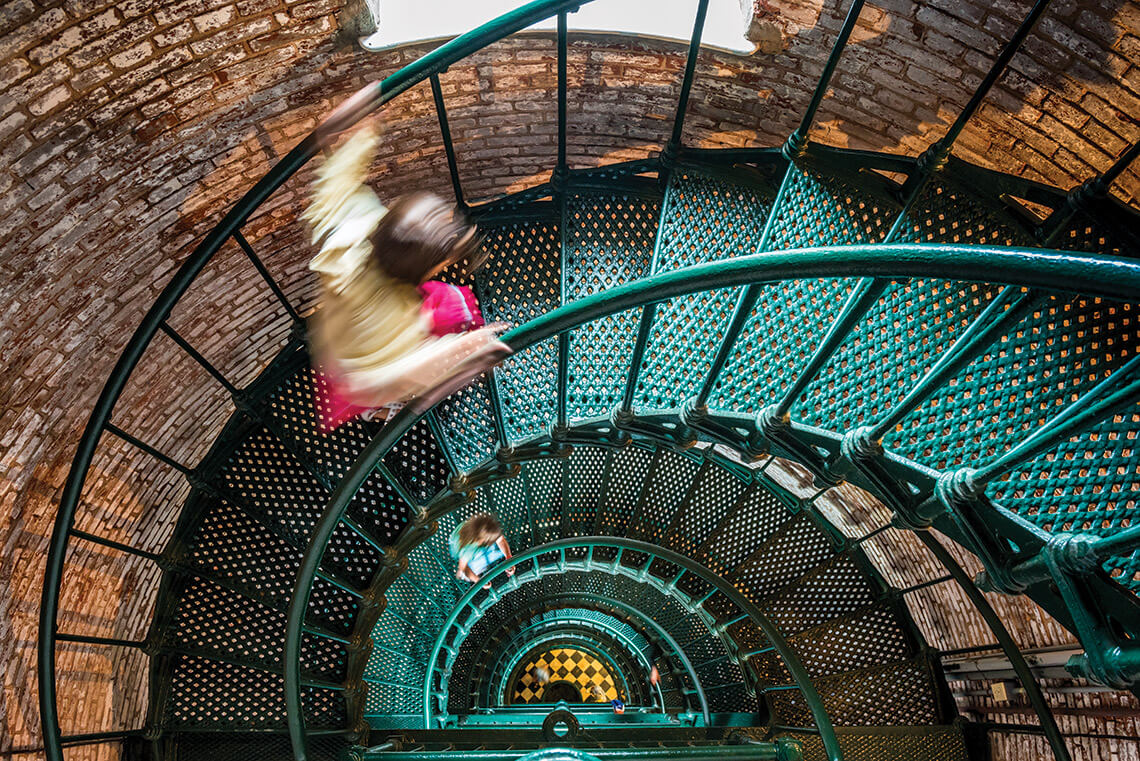 For a bird’s-eye view of the Outer Banks, you have to go up — and up, and up, and up. Most of our seven lighthouses allow visitors to climb to the top. At Currituck Beach Lighthouse (above), that means exactly 220 steps up a spiral staircase. Your reward? Spectacular views of Currituck Sound and the Atlantic Ocean. 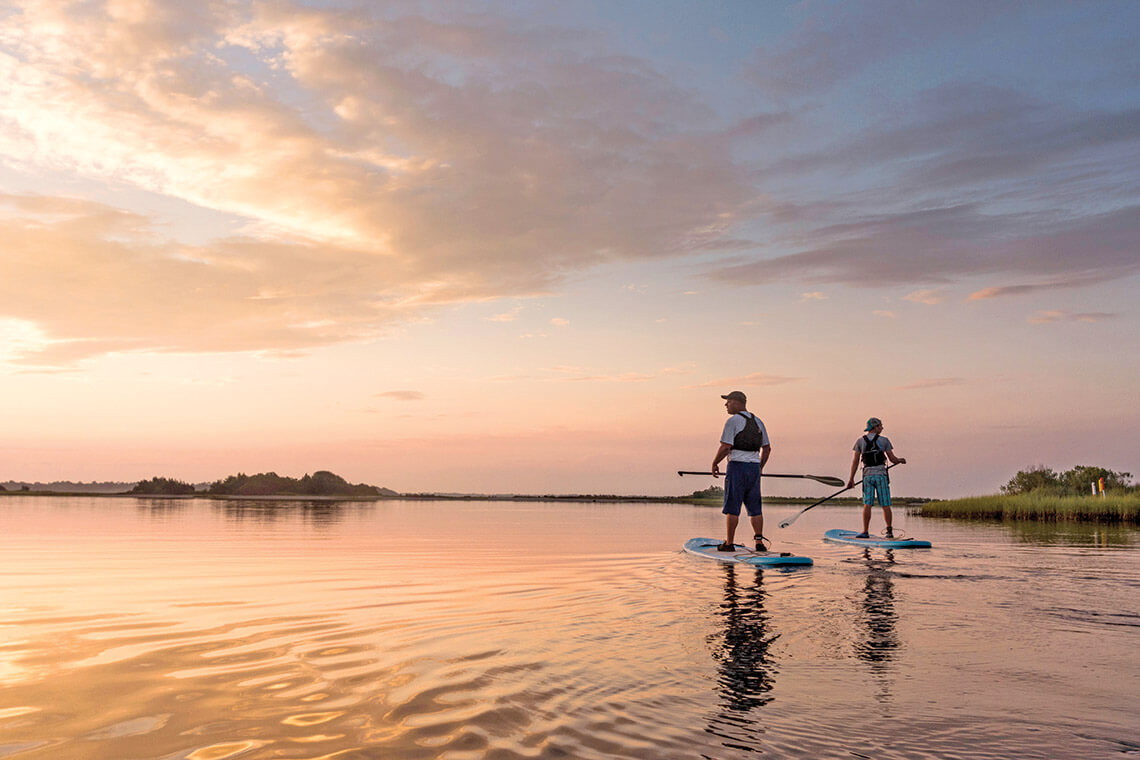 The Hammocks is a maze of waterways, its inlets and islands carved out by centuries of storms. This backwater sanctuary has long been a place of refuge, giving shelter in peacetime and wartime to loggerhead turtles, American Indians, whiskey runners, pirates, and soldiers alike. And to paddlers, who enjoy one of the state’s most beautiful unspoiled maritime landscapes, undisturbed. 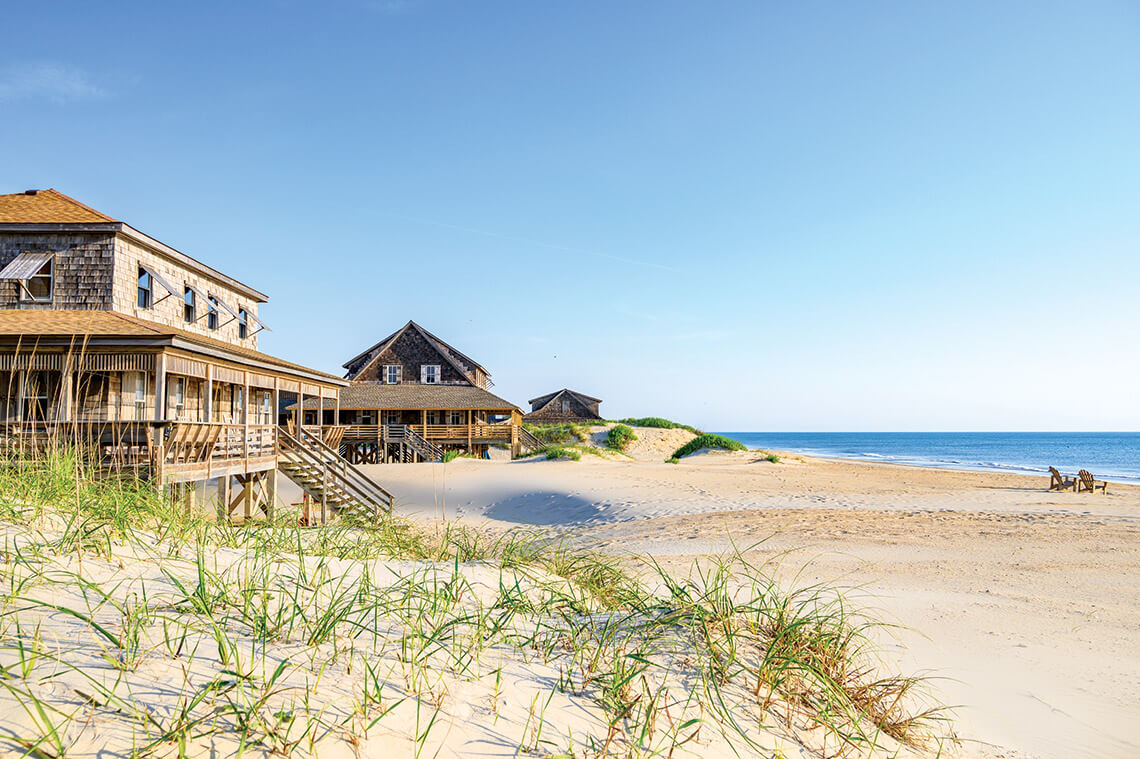 In Nags Head, a handful of century-old — and older — cedar-shingled beachfront cottages have withstood every type of storm. Their longevity can be traced to their builder, S.J. Twine, who was more interested in function than form, and to the families who’ve preserved them — and the way of life they offer — by doing, well, nearly nothing to them.

“Beach Cottage Row” can be seen along NC Highway 12 near Jockey’s Ridge. 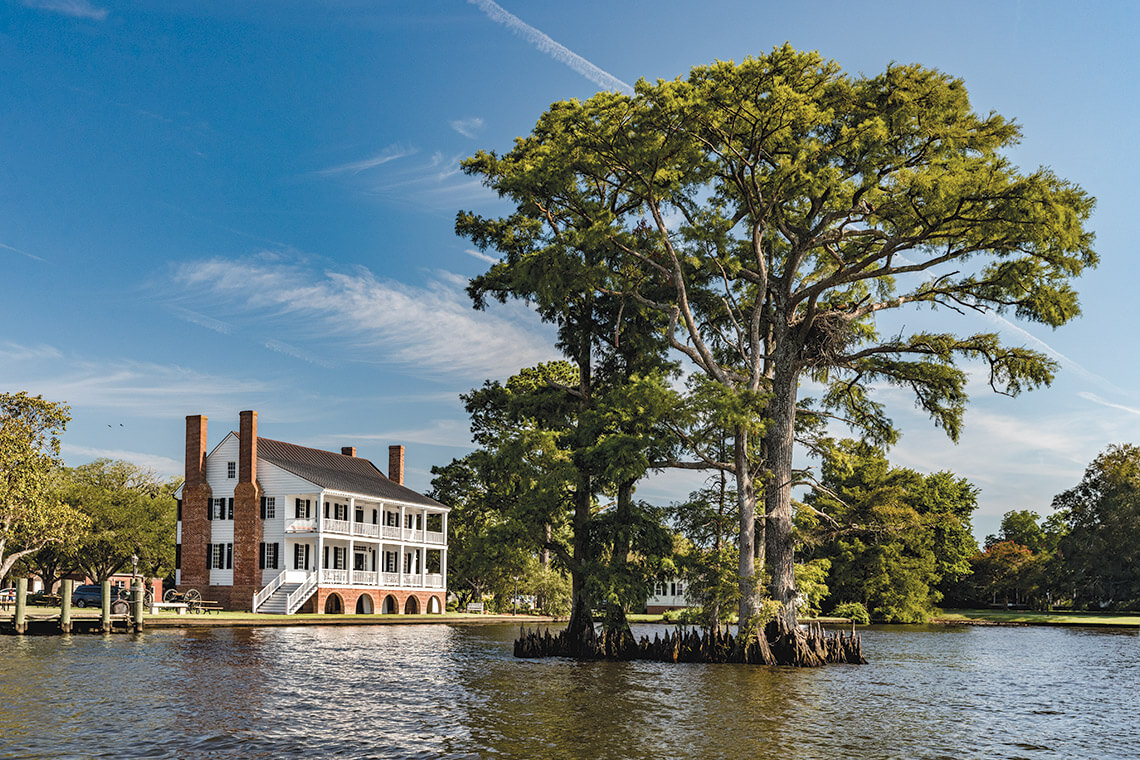 Edenton is filled with colonial architecture and waterfront views, including those found at the historic 1782 home of Penelope Barker, who led the charge in the Edenton Tea Party, in which 51 women protested the British tax on tea and cloth. Today, visitors rock between past and present before a beautiful view of Edenton Bay. 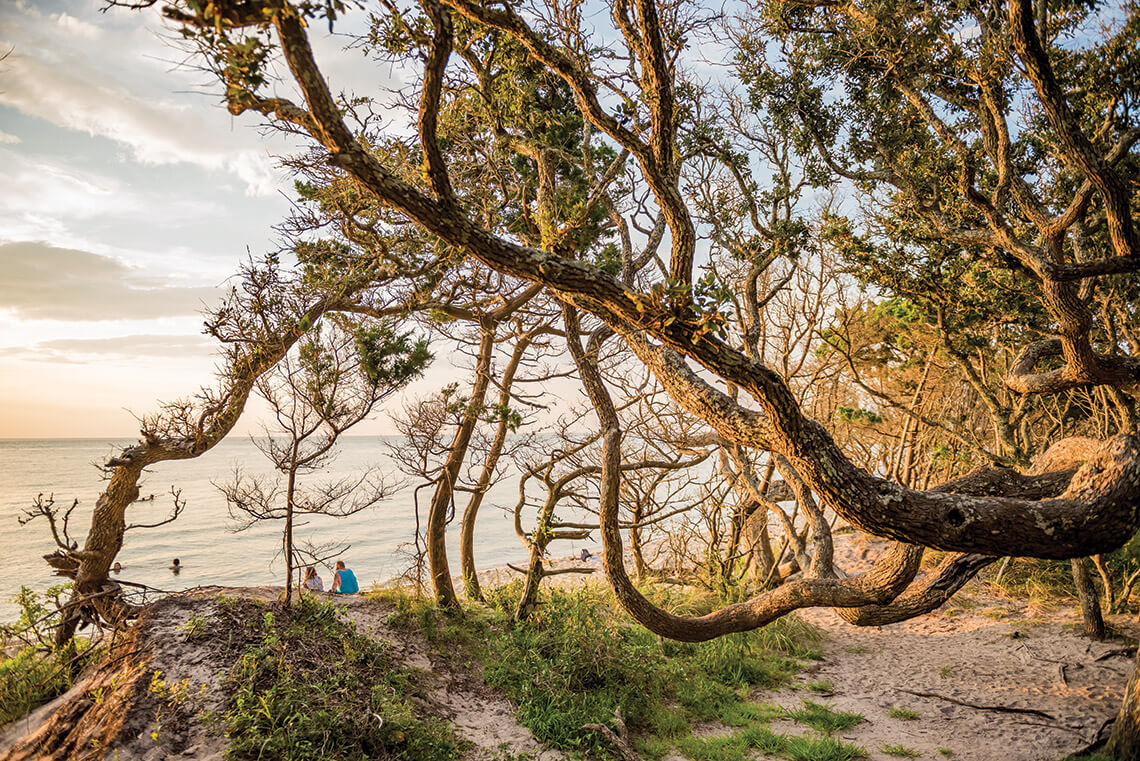 Kayaks floating on Pamlico Sound off of Ocracoke Island echo seafaring vessels of the past: Centuries ago, American Indians and pirates found refuge on what is now Springer’s Point Nature Preserve. Follow a sandy path through silvery maritime trees and down to the beach, where you’ll discover ancient live oaks and stunning sunsets.

Commissioned by the federal government in 1871, life-saving stations and their crews of surfmen became blueprints for the modern U.S. Coast Guard. A few of the seven original stations built on the Outer Banks remain, and have been restored and preserved: The Caffey’s Inlet and Kitty Hawk stations are now restaurants, the Ocracoke station is now used by the Coast Guard, and the Chicamacomico station is a museum. 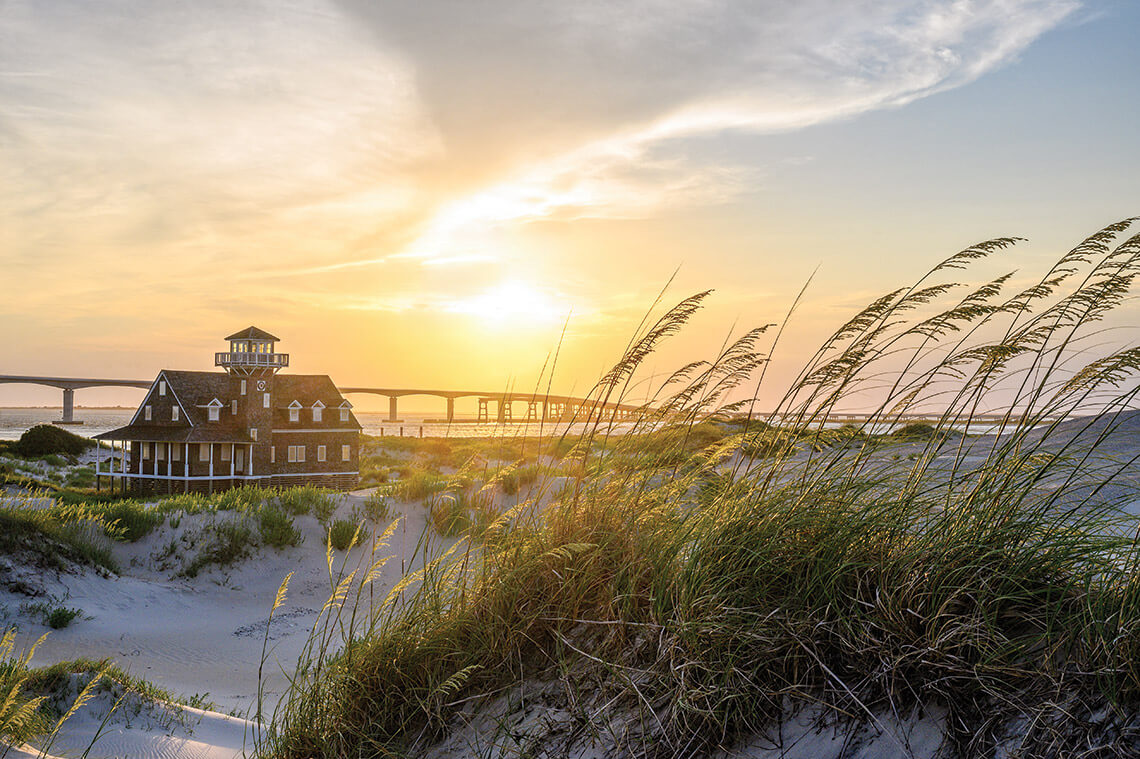 On the northern tip of Pea Island, the Old Oregon Inlet Life-Saving Station (above), one of the seven original life-saving stations built in North Carolina in 1874, greets visitors as they cross Marc Basnight Bridge.

Park in the small lot on the Pea Island side of the Basnight Bridge on NC Highway 12. 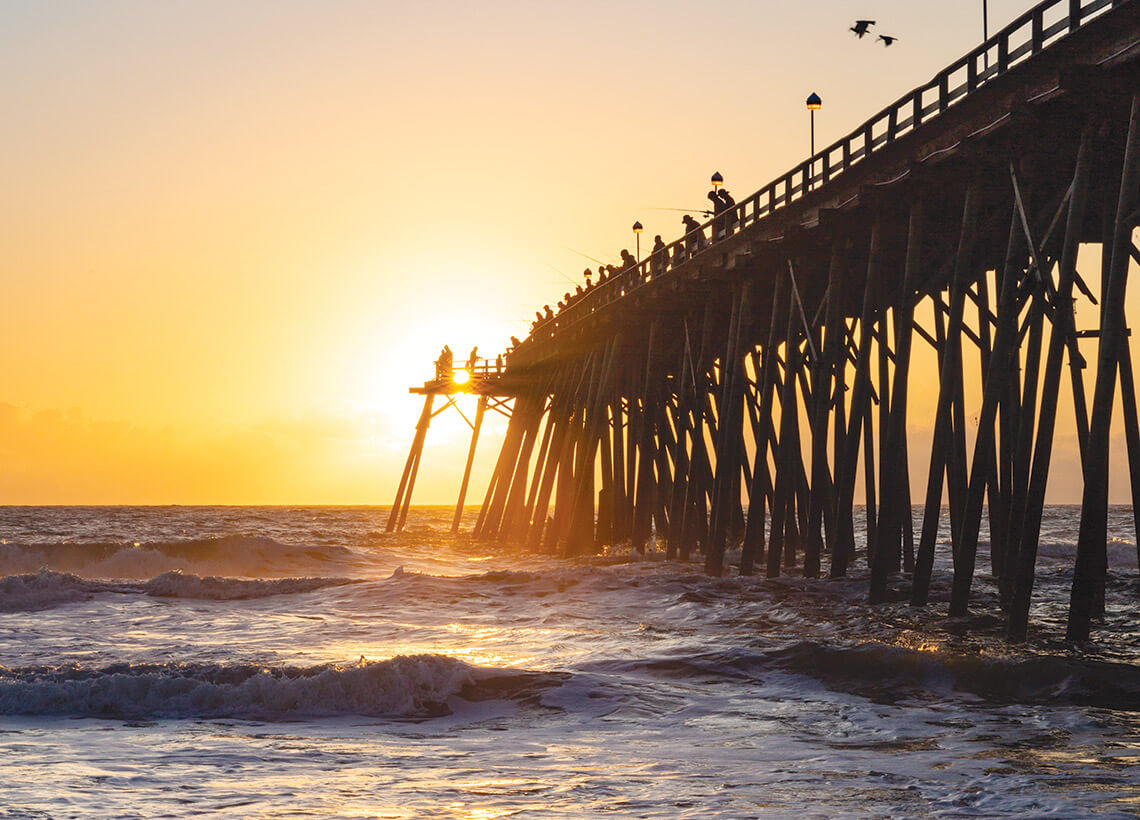 It doesn’t much matter if you choose to bring your tackle box, your date, or your camera, if you prefer to head out before dawn or wait ’til the sun is sinking: North Carolina’s 18 piers are stalwart landmarks for families and fishermen.

The closest you can get to Bermuda without hopping on a flight, this iconic sliver of beach at the geographic center of Hatteras Island stretches out farther into the Atlantic than any other part of the Outer Banks. Just don’t forget the four-wheel drive.

From the swinging benches at Southport’s Waterfront Park, two lighthouses can be seen: Old Baldy and the Oak Island Lighthouse. Designed to reflect the relaxed spirit of Southport, the swings have been beloved for decades by visitors and locals alike — and have even made appearances in movies.

This national seashore — the first of its kind when it was established in 1953 — preserves and protects 70 miles of North Carolina’s Outer Banks, including pristine beaches, sand dunes, marshes, woodlands, and three lighthouses, from Bodie Island to Ocracoke. 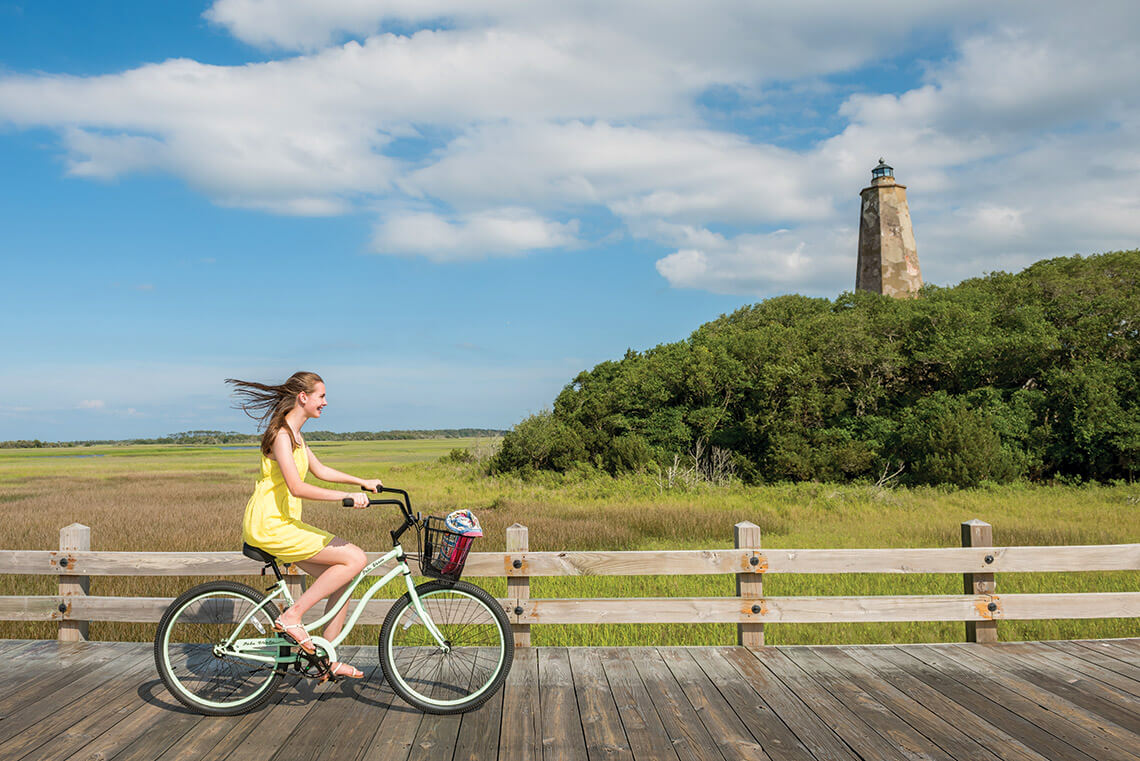 Where the Cape Fear River empties into the Atlantic, there’s an island. Men have bought and sold it, changing its name from Smith Island to Palmetto Island. Yet to seafarers, the dune on the western end of the cape has long been Bald Head. Take a ferry over from Southport and ease into a slower pace — because, with no cars on the island, Bald Head is a hard place to be in a hurry. Then park your golf cart and listen to a rare kind of wild silence. 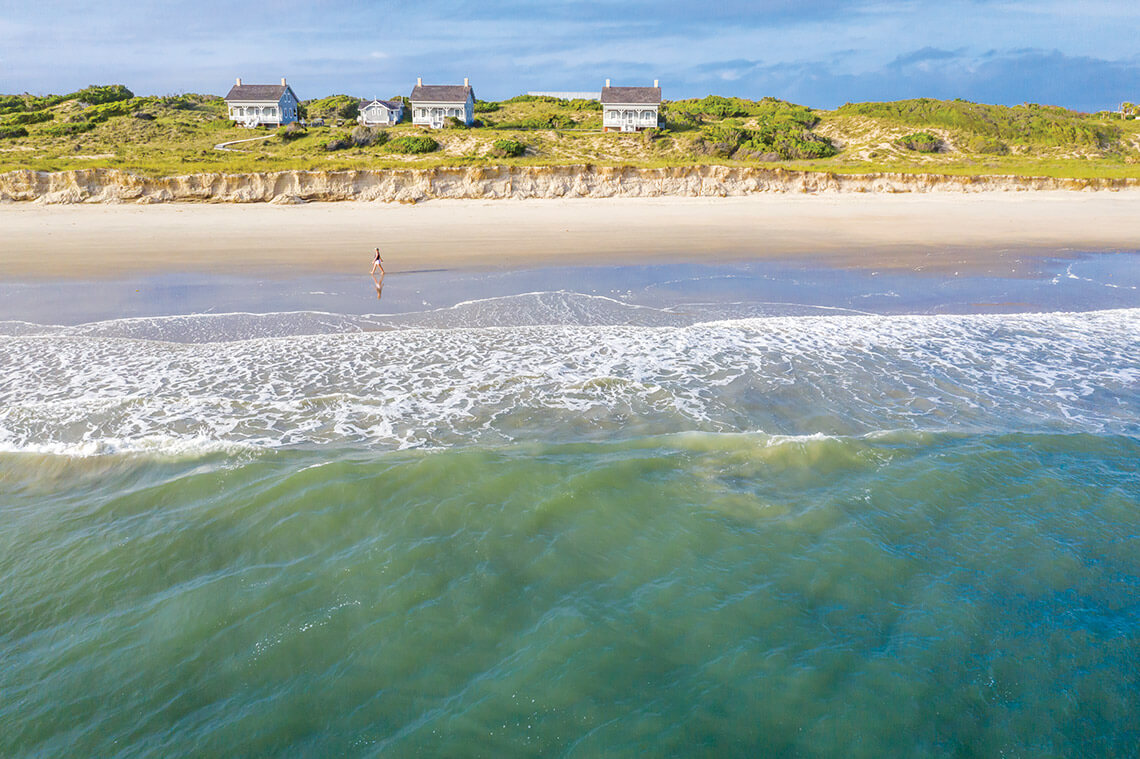 Perched proudly on the dunes of Bald Head Island are three little cottages named after the Cape Fear Lighthouse keeper who occupied them alongside his family and assistants from 1903 to 1933. When the lighthouse was decommissioned and demolished in 1958, the cottages remained. Later, they were turned into vacation rentals. Away from the main stretch of the island’s beach homes, there’s a lot to marvel at from the cottages’ shared boardwalk. On a clear night, the Milky Way can be seen with the naked eye. 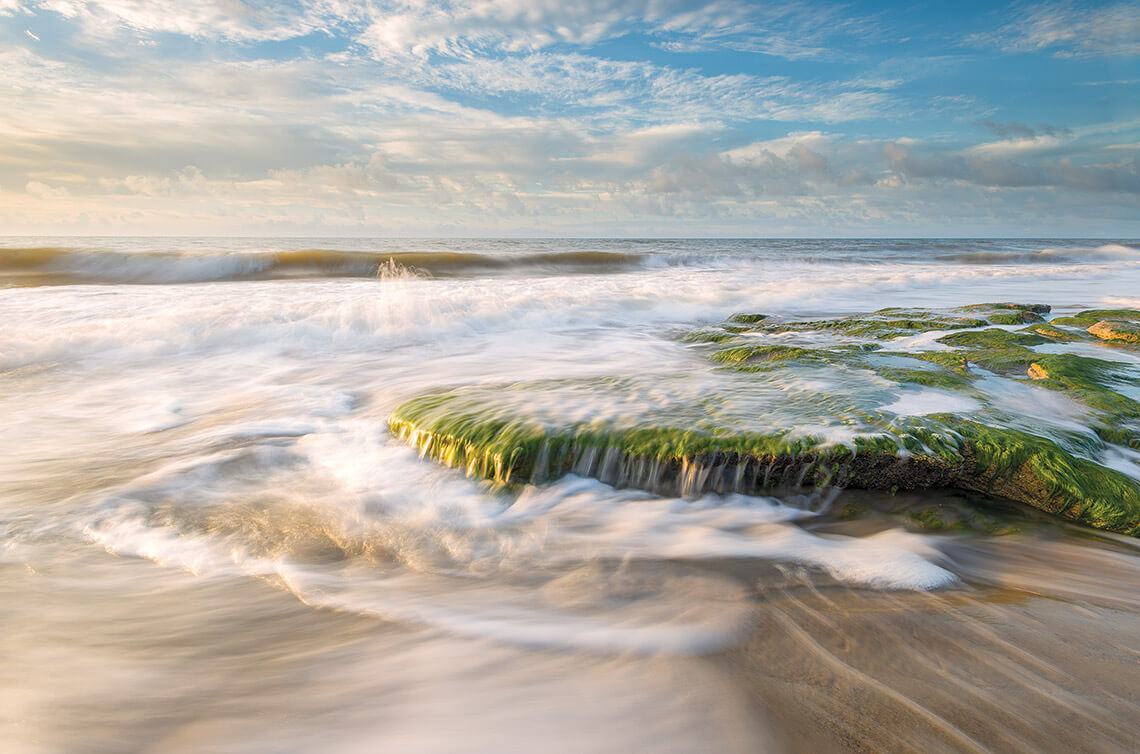 Near the Fort Fisher Monument, what was once a mass of shells and coral has, over many years, been crushed and molded by wind and tides into a limestone stage for breaking waves. This moss-covered outcrop is only visible to visitors at low tide. To find this waterfront wonder, park at the lot off Battle Acre Road, across from the monument, head north on the oceanfront trail until you reach the gazebo, and continue onto the sand. 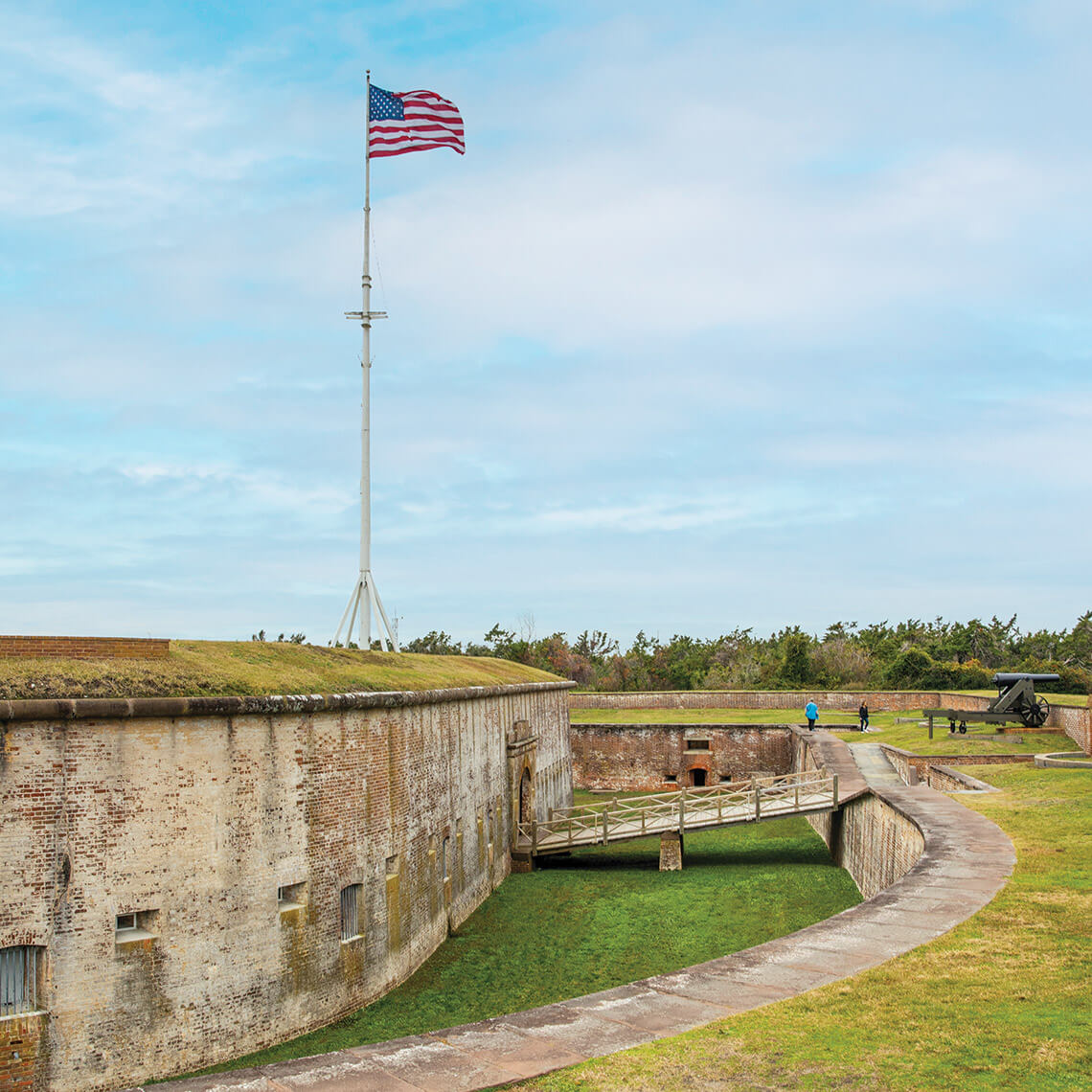 This carefully restored Civil War-era fort at Atlantic Beach was the project of Robert E. Lee when he was a young army engineer. Today, you can step into Fort Macon’s casemates and immerse yourself in history. 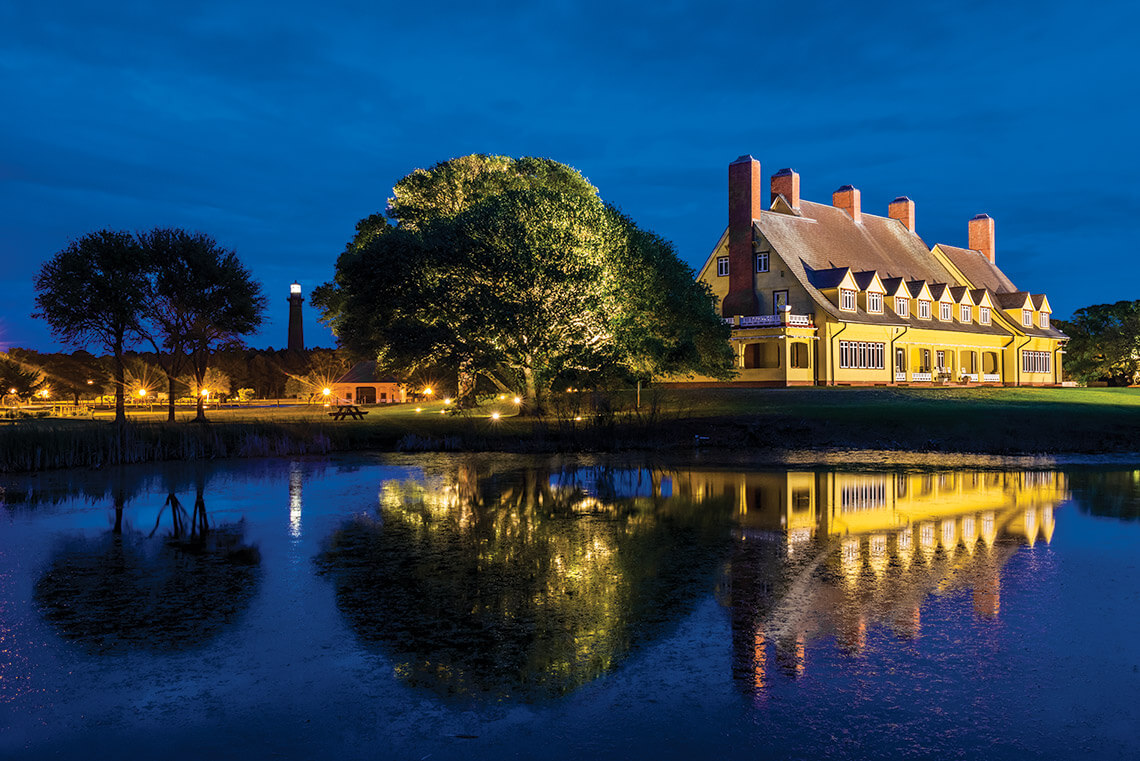 The most opulent of all of Currituck’s famed hunting clubs, this historic yellow manor — now considered to be one of the finest expressions of Art Nouveau style in the country — was built as a prestigious retreat in 1925. Today, restored to its original glory, it continues to provide breathtaking views of Currituck Sound.

Find this story and many more in Coastal North Carolina. Introducing our limited-edition keepsake anthology: a 200-page guide to celebrating the best of our coastal issues! We’ve mapped out the coastal towns we love, adventures you can’t miss, the best places to eat, and, of course, all seven lighthouses. Pick up your copy online or on newsstands now!