Taylor Mahlke has always loved the feel of paper. “My mom used to send letters to our house just so I would get something in the mail,” she says. In 2015, when the self-taught painter and designer decided to start her own business, she remembered how special seeing her name on an envelope and reading a handwritten note made her feel. Pen+Pillar, the High Point stationery business run by Mahlke and her husband, Justin, started out with cheerful, whimsical greeting cards, all of which Taylor paints herself, and has since expanded to grocery pads, prints, and one of their most popular new products: planners. Customers who come into their storefront, which opened in March 2021, often head straight to the table of spiral-bound planners — adorned with tigers walking along vines, bright oranges and lemons bursting from branches, and golden bumblebees — just across from the wall of greeting cards, where it all started for Mahlke. In a world of texts and emails, she says, “I like that we’re creating something for people to encourage each other and stay in touch in a personal way.” Her mom still sends her cards on occasion. Now, Mahlke immediately recognizes her own design on the card, but the message inside is always a surprise. — Katie Kane 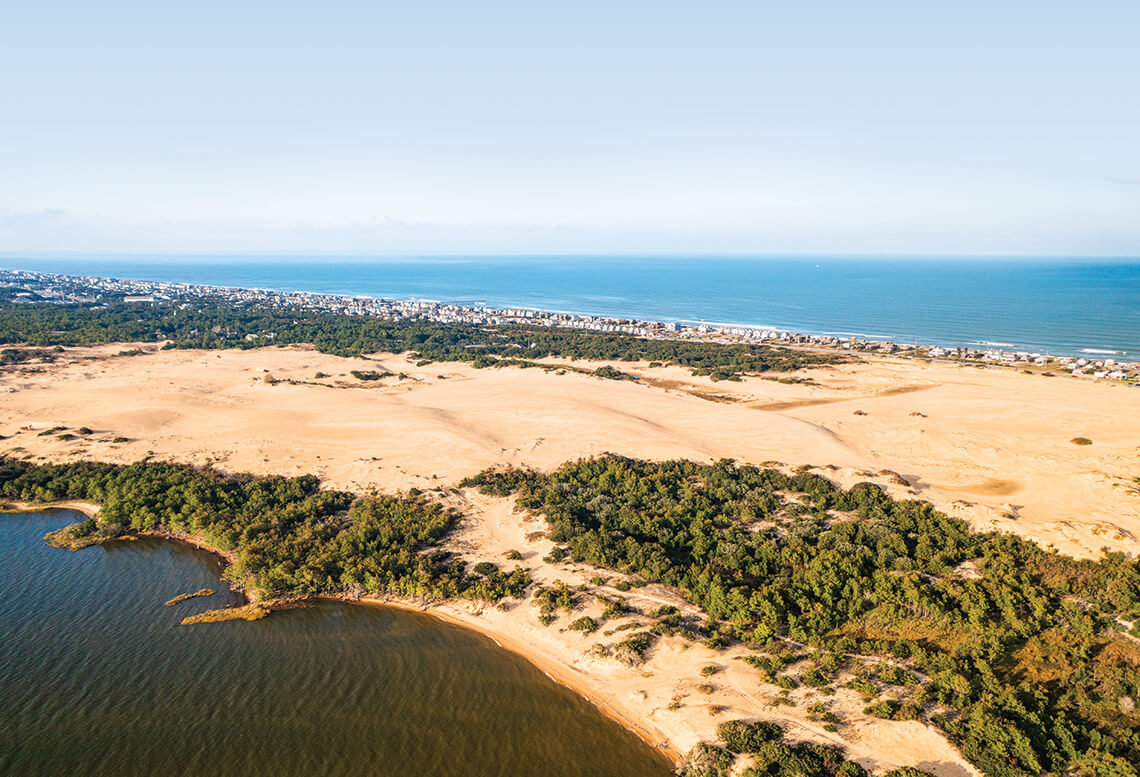 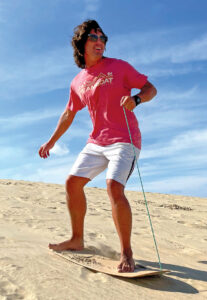 Christina Carpenter hadn’t been on a sled for nearly 30 years, but after watching her kids zip down the slope of a 40-foot dune on a sandboard at Jockey’s Ridge State Park, she thought, I want to try that. She sat on the back of the board, and after a couple of partial runs, she scooted to the bottom, laughing with delight. “That felt like what I remember from sledding,” she says.

The Carpenters, from the small town of Findlay, Illinois, rented the sandboard from Kitty Hawk Kites and took turns sliding down the dunes during their first visit to the Outer Banks. A sandboard is a cross between a snowboard and a sled: There are no bindings or slots for your feet, just a rope attached to the front of the board, giving riders a way to keep their balance while they sit — or stand, if they’re feeling ambitious. Sand doesn’t permit the carving, back-and-forth runs that are possible on snow and ice, but it’s common to see people boarding even in winter.

When Carpenter arrived at Jockey’s Ridge, she had no intention of riding the dunes. “I thought it was just going to be the kids,” she says. “I’m glad I did it.” — Dave Fairbank

Inside CHICLE Language Institute in Chapel Hill, Perla Saitz pages through restaurant menus printed in Spanish for a role-playing exercise on ordering Latin American dishes. “Let’s act it out,” she says to her student, practicing a decades-old teaching technique that she learned while studying English and French in the mid-’90s. Saitz only speaks Spanish, and the student echoes the food and drink phrases that they’ve rehearsed. The same interactive style is used during private and group courses on more than 15 languages, including French, German, and Mandarin, taught mostly by native speakers. Saitz and Spanish teacher Rebeca Cabrera bought CHICLE (Chapel Hill Institute for Cultural and Language Education) in 2014, 15 years after it was established. They offer language programs for children and adults, including translation and interpreting services. “It’s never too late to immerse yourself in a new culture,” Saitz says. “That’s the magic of language.” — Tamiya Anderson 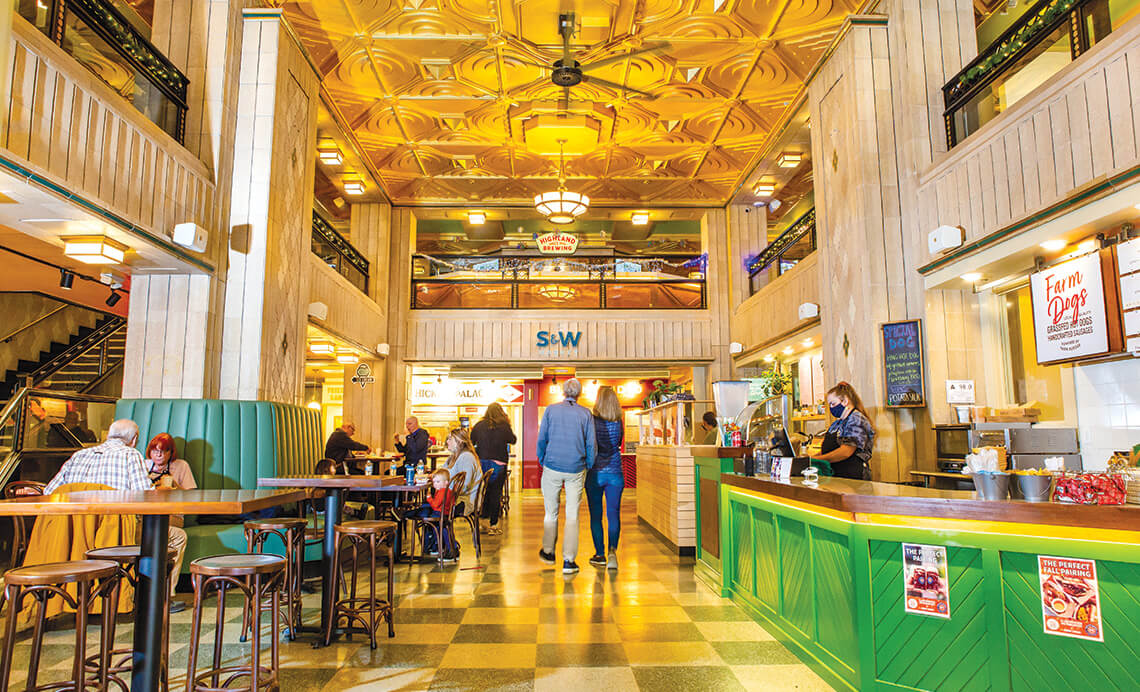 The ceiling of The S&W Market was painted gold based on a description in an Asheville Citizen story from the original cafeteria’s opening day in 1929. photograph by Tim Robison

When people of a certain age pass through the Art Deco entryway of Asheville’s S&W Market, memories of the cafeteria that was housed there from 1929 until the 1970s come flooding back. These days, seven local vendors serving chef-driven meals, craft beer and cocktails, and ice cream have replaced the typical cafeteria food, but the look and feel of the place are largely the same. Douglas Ellington, the architect behind many of downtown Asheville’s most iconic buildings, designed this location of the former Charlotte cafeteria chain to be “especially grand,” says Anne Aldridge of Ellington Realty, the company that manages the new food hall. “At one time, S&W was truly the center of the downtown Asheville community” — and she hopes that it will be again. — Katie King 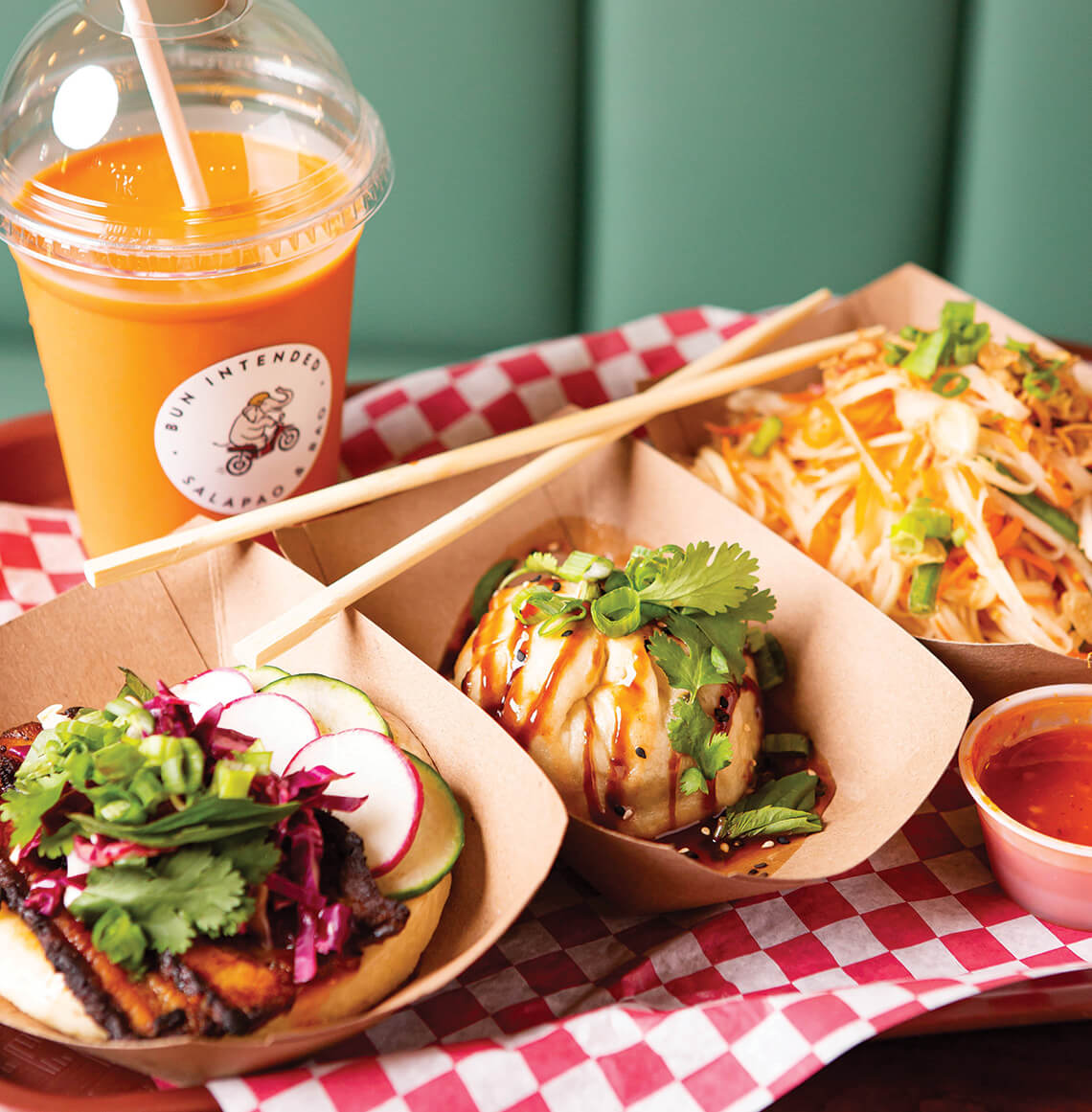 Pick your favorite vendor or try them all for a food tour of Asheville.

Classic and specialty craft cocktails, nonalcoholic drinks, and coffee (with or without booze).

Nicole Walcott thought that she would have chronic back pain forever. She had suffered a spinal cord injury in a Humvee accident in South Korea in 2012 while serving in the Army. After two years of living with lower back pain, Walcott learned about flotation therapy, a sensory-deprivation experience that involves floating in an enclosed tub. She was skeptical of the treatment at first, but after floating weightlessly for an hour, “it was like a light switch went off,” she says. “I hadn’t remembered what it was like to be pain-free for so long.”

Now, as founder and CEO of Fayetteville Wellness Center, Walcott helps others, especially veterans, manage their stress and pain through services like flotation therapy, massages, and yoga. “I like to think of us as alternative medicine,” she says. “We are not a spa. Mostly because we want you to feel better, but we also want you to be better.”

Inside the dark float tank, the water temperature is set to 93.5 degrees, the same temperature as your skin. There’s no need to support yourself: The water, highly salinated, does it for you. In a near-zero-gravity experience, your muscles and joints loosen, allowing you to relax. — Michelle Kurilla 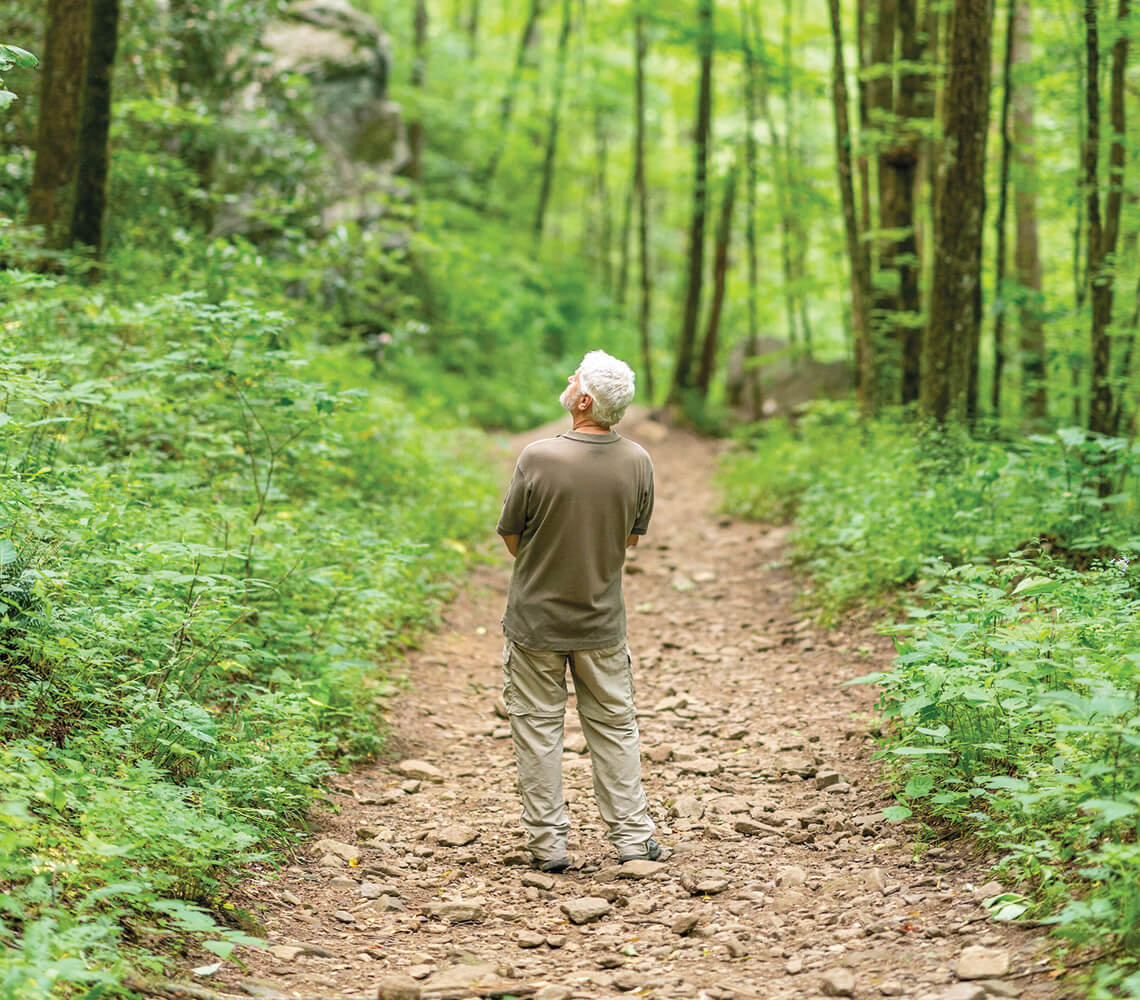 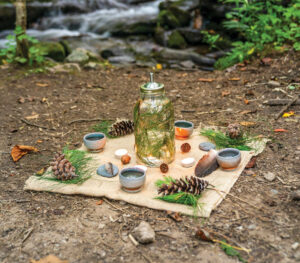 In the woods of Pinnacle Park near Sylva, moss-covered rocks and gnarly rhododendrons mingle with shade oaks. A chickadee whistles a cheery song. With each crunchy step on his more than two-hour forest therapy walk, guide Mark Ellison encourages a slow, intentional experience. “It’s a sensory invitation,” he says. “I ask [people] to notice what’s in motion, to notice the things along the trail. Each step is very purposeful.”

Ellison founded Pinnacle Forest Therapy to teach others the Japanese practice of shinrin-yoku, or forest bathing. Spending time among trees offers proven health benefits, from lowering blood pressure and improving concentration to sparking creativity and reducing stress. The experience is meaningful, Ellison says, often moving participants to tears. “Forest therapy is not about having a strenuous experience; it’s about the depth of the experience,” he says. “It’s about spending some time relaxing in nature and engaging your senses.” — Virginia Brown

Walking into The Next Chapter Books & Art in New Bern, a regular is immediately greeted by Derby, the playful orange-and-white tabby that calls the bookstore home. The friendly cat keeps the customer company while owner Michelle Garren Flye helps the man trade in his used book and find his next read.

Flye bought The Next Chapter in early 2020 when the store’s former owner retired. She sells used books, works by local artists and photographers, and books by local authors — like award-winning adult and young adult novelist Leslie Tall Manning and contemporary and science fiction writer Stanley B. Trice, both of whom are known to pop in regularly. Flye is an author and a poet herself, writing romance and children’s books. In 2021, she was named the Heart of the Pamlico Poet Laureate.

“I love helping people find the right book, and I really love it when they choose to read local authors,” Flye says. “I like to see people take that chance on reading somebody new.” 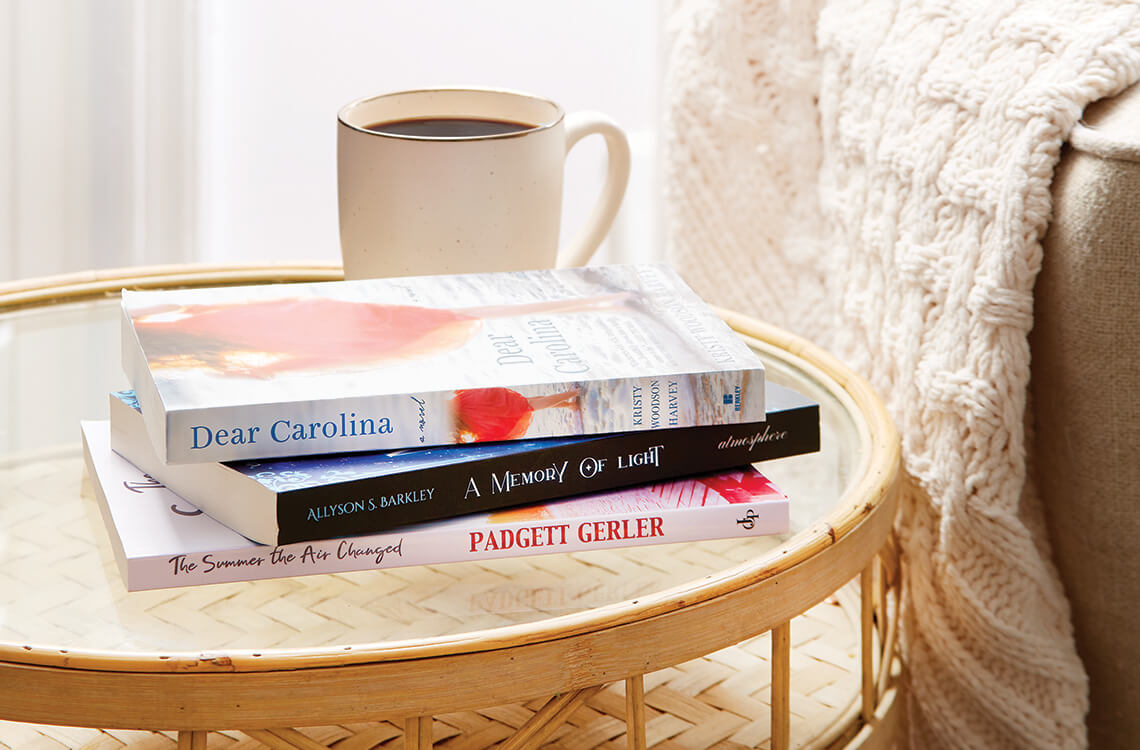 A new year calls for a new reading list, and Flye has a few recommendations for page-turners that will make it easy to keep your resolution to read more in 2022. photograph by Matt Hulsman

The Summer the Air Changed by Padgett Gerler

Tourists flock to a small North Carolina mountain town after a local sees the image of Jesus in a rock. When the town’s pets begin to go missing, 14-year-old Bit Sizemore and her best friend, Wisteria Calliope Jones, must solve the mystery. “I grew up in the North Carolina mountains,” Flye says, “and I felt like I was at home while I was reading it.”

Beaufort writer Kristy Woodson Harvey’s touching debut novel from 2015 is written from the point of view of the two mothers, one biological and one adoptive, of daughter Carolina. “Dear Carolina features strong female characters from the South with a beautiful setting and a storyline that any woman can relate to,” Flye says.

A Memory of Light by Allyson S. Barkley

This first book in the fantasy series “Until the Stars Are Dead,” by Durham writer Allyson S. Barkley, tells the story of Ari, a forest-dwelling thief. Ari’s solitary life is uprooted when a mysterious stranger offers her a job that she can’t refuse, requiring her to partner with a loquacious magician on a challenging journey. “Barkley’s characters, setting, and use of language provide an excellent release from reality,” Flye says. — Rebecca Woltz