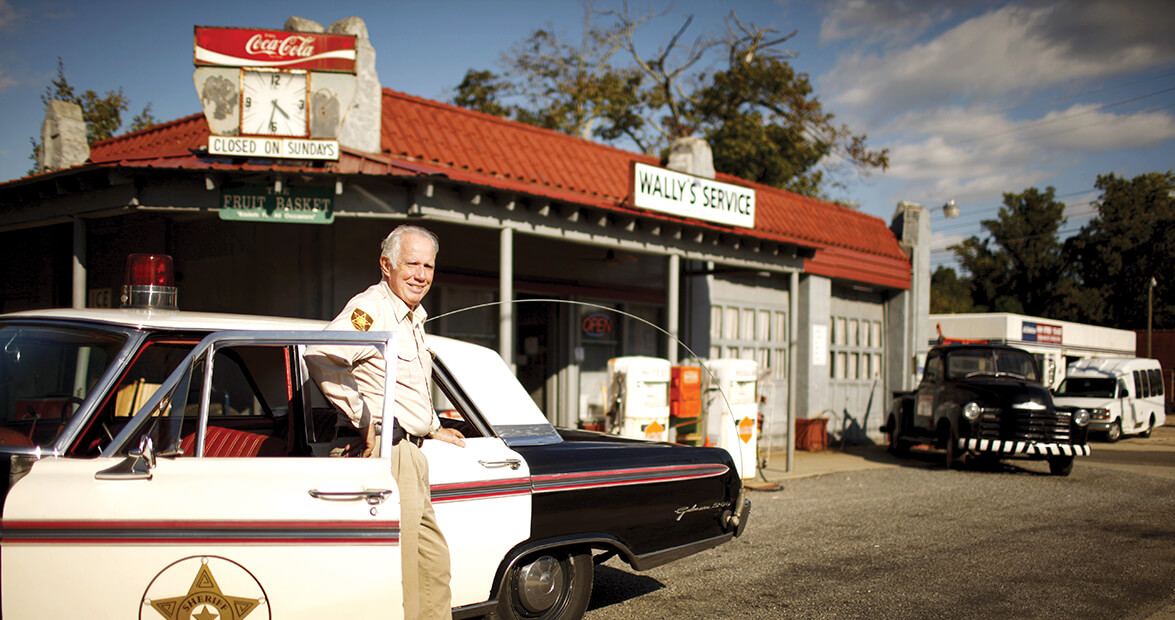 2. This Mayberry-industrial complex didn’t exist here before 1990, when the first Mayberry Days (then, just Day) was held to commemorate the 30th anniversary of The Andy Griffith Show’s first episode. A reporter wrote a preview, something like, “Mayberry: What it was, was Mount Airy.” Next came more reporters. More publicity. More tourists.

3. City Barber Shop, despite having no Floyds, renamed itself Floyd’s City Barber Shop, as a nod to the name of the shop in the show. It’s next door to Snappy Lunch, which is the only existing Mount Airy business mentioned by name in an episode. Barber Russell Hiatt, 91, no longer cuts hair, but he still comes in six days a week to take pictures with gawking tourists. Those snapshots cover the walls. At one point, because of fire codes, thousands of photos had to come down.

4. Andy Griffith died in 2012, and every so often, someone will walk up to Dennis Williams, who owns a frame store next to Barney’s Café, and whisper: “Where’s Andy buried?” Dennis will politely explain that Griffith is buried in Manteo, which is true. This sometimes elicits a disbelieving: “We know he’s here.”

5. I walked around Main Street, whistling the theme music from The Andy Griffith Show for a full 10 minutes. Gimmicky, yes, but I was hoping it would be a call-and-response, like yelling “Tar!” at a UNC basketball game. Alas, the only thing people said back to me was “hello.”

7. I kept wondering how long this — the Barney Fife cardboard cutouts, the pork chop sandwiches, and the museum featuring all sorts of Griffith career detritus, from The Lost Colony playbills to Matlock’s seersucker suit — could last. Short answer: as long as the show is syndicated. A longer, more thoughtful answer: forever. Mayberry has gone from being just a place in a show to a state of mind, shorthand for old-timey, small-town North Carolina life. It’s not just where Opie lives. It’s not just where pies cool on windowsills. In your heart, it’s a real place. And as long as Mayberry is a metaphor, people will come.

8. In front of a bronze sculpture of Opie and Andy smiling at each other, fishing poles in hand, stood a man in overalls, holding the hand of his daughter. They stood together and stared.