Winter adventurers find their thrills in the highest parts of our state, where the temperatures plunge and the white stuff sticks around. In 1961, North Carolina’s first commercial ski operation opened to unexpected acclaim, The State magazine reported: “Most observers were surprised to behold a season’s total of 3,000 adventurous skiers who appeared from somewhere to enjoy the Cataloochee slopes.” A series of ski facilities followed in quick succession, and today, skiers flock to resorts like Sugar Mountain (peak elevation 5,300 feet) and Beech Mountain (peak elevation 5,506 feet), as well as the Roan Highlands (6,286 feet at its highest point) for more rugged pursuits.

Michelle Spell (left) named her bakery after her daughter Ava, then 2, who would hear the kitchen timer go off and exclaim, “My cupcakes are ready!” Now 13, Ava helps out in the bakery every day. photograph by Stacey Van Berkel

Customers are delighted to peek inside the display case at Ava’s Cupcakes and find snowflakes — a wintry version of the bakery’s seasonal sugar cookies. After opening Ava’s in her native New Jersey — and winning Food Network’s Cupcake Wars in 2012 — Michelle Spell and her family moved south to open a shop in Florida. Missing the cold and snow, they’d escape the heat at home, closing the blinds, cranking the AC, and baking snowflake cookies to whip up a little winter inside their kitchen. In 2016, they moved to North Carolina, where Michelle finds inspiration in the changing seasons — and, at two Ava’s locations in Forsyth County, her husband and children continue to help her creativity shine.

Our mountains invite quiet contemplation in every season, but winter brings a particular kind of meditative beauty. Away from the excitement and activity of the ski slopes in Beech Mountain, far from the busy streets of downtown Highlands, these western North Carolina communities are hushed, pastoral, peaceful. Here and elsewhere across the state, snow gives us an opportunity to appreciate our favorite places anew, all dressed in white. 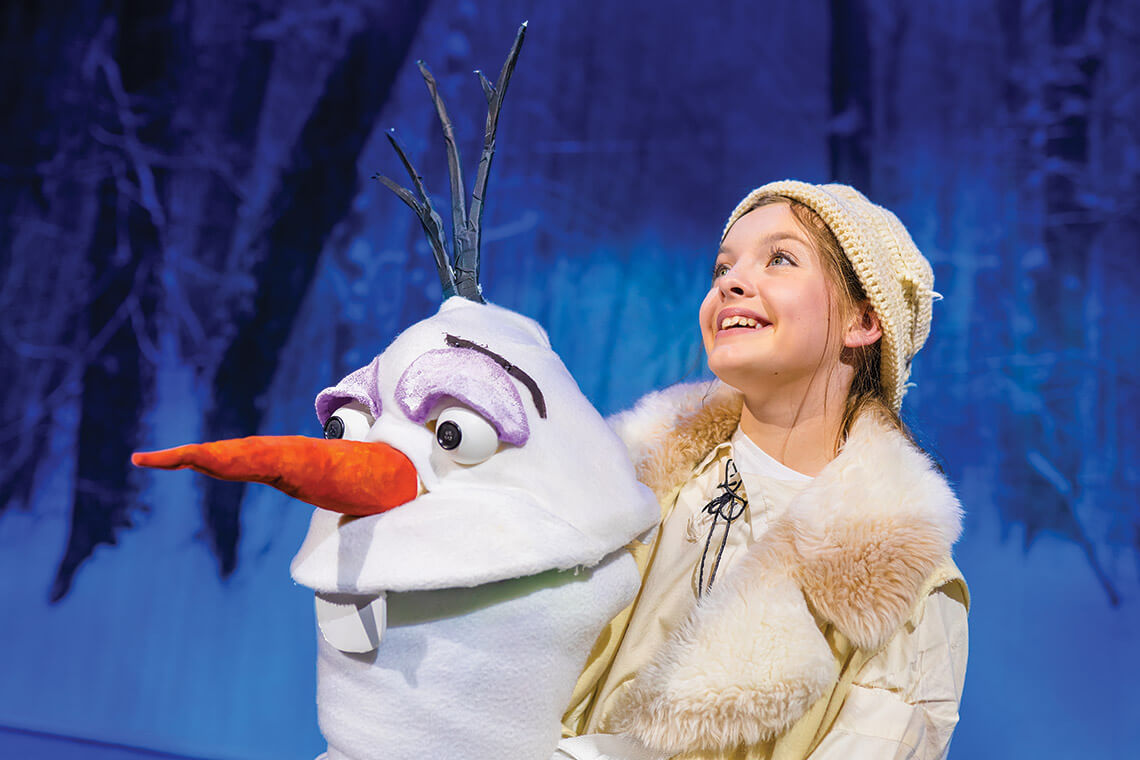 To prepare for her role as Olaf — her first time on the Green Room stage — 10-year-old Emma Spencer learned to move the snowman puppet’s mouth with each line of her dialog. photograph by Jerry Wolford & Scott Muthersbaugh

When Frozen Jr. opened at The Green Room Theatre in early 2022, the audience marveled over lighting effects that made it look like ice was cracking all over the proscenium and floor; life-size, moving puppets of Olaf the snowman and Sven the reindeer — made, like most of The Green Room’s costumes, in-house — and the talented young cast members who sang and danced their way through the beloved Disney musical. Frozen Jr. had been selected as The Green Room’s annual youth production in 2020, but that cast was only able to perform once before the pandemic hit. So for everyone involved with the production, including eight of the original actors, it was extra special to see the show finally come to life. 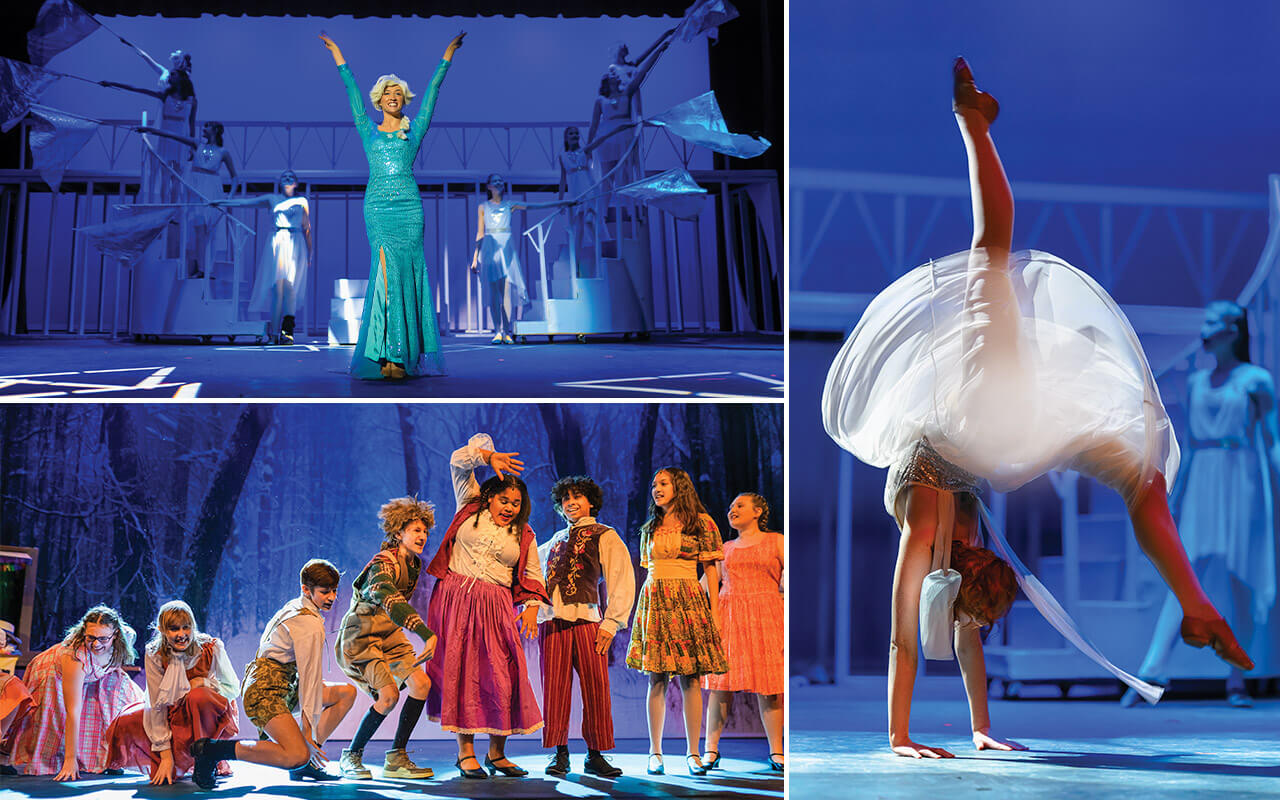 The Green Room was established in 1987 and moved into its current home, a former post office renovated into a playhouse, in 2010. It prides itself on being a true community theater, bringing together neighbors not only in Newton, where local volunteers sew costumes, build and paint sets, work in the box office, and usher performances, but also across central North Carolina. In the eight weeks of rehearsal for each youth musical production, the performers and their parents — some of whom live as far away as Charlotte, Boone, and Greensboro — forge lasting friendships. 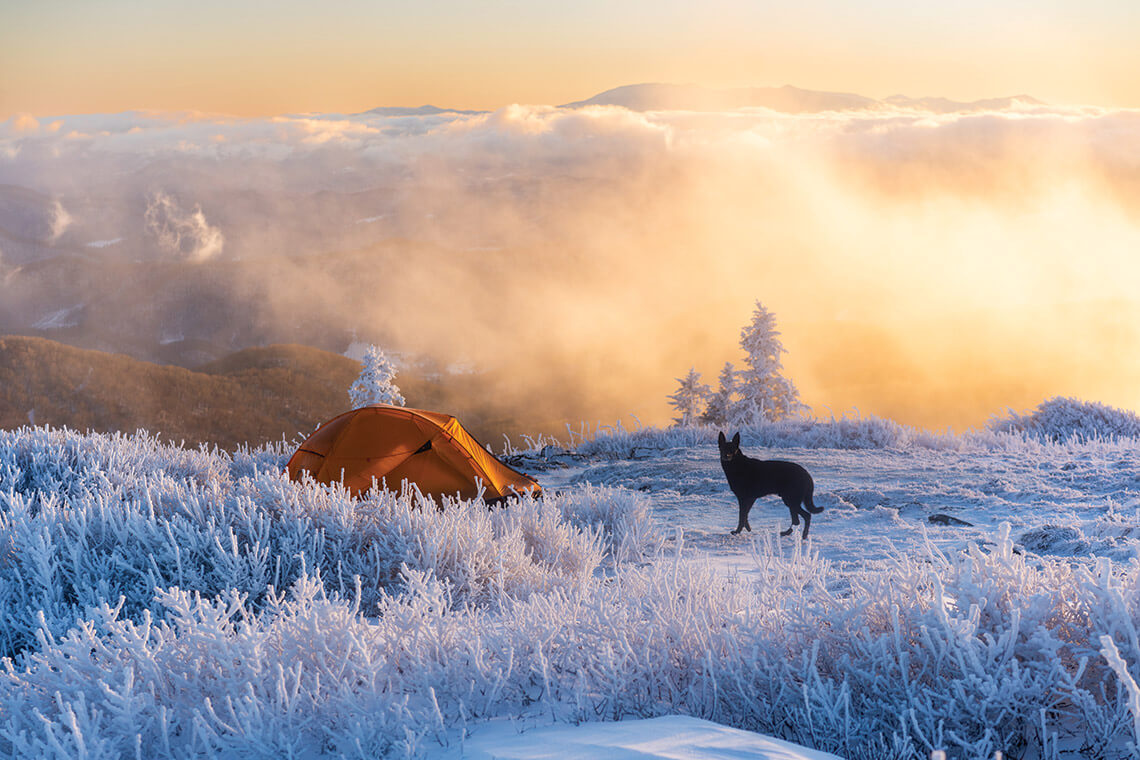 Photographer Steve Yocom and his Belgian Malinois, Cain, love that in winter, busy stretches of the Appalachian Trail quiet under a blanket of snow. photograph by Steve Yocom

Camping in the Clouds
Roan Mountain

At an elevation of more than 6,000 feet, Roan Mountain rises up into a realm of its own, averaging more than 100 inches of snow each year. A plan to turn the venerable mountain into a downhill skiing destination gained momentum in the 1950s, and although it never panned out, snowshoers, cross-country skiiers, and mountaineers relish the area’s backcountry beauty. Photographer Steve Yocom and his Belgian Malinois, Cain, love that in winter, busy stretches of the Appalachian Trail quiet under a blanket of snow. 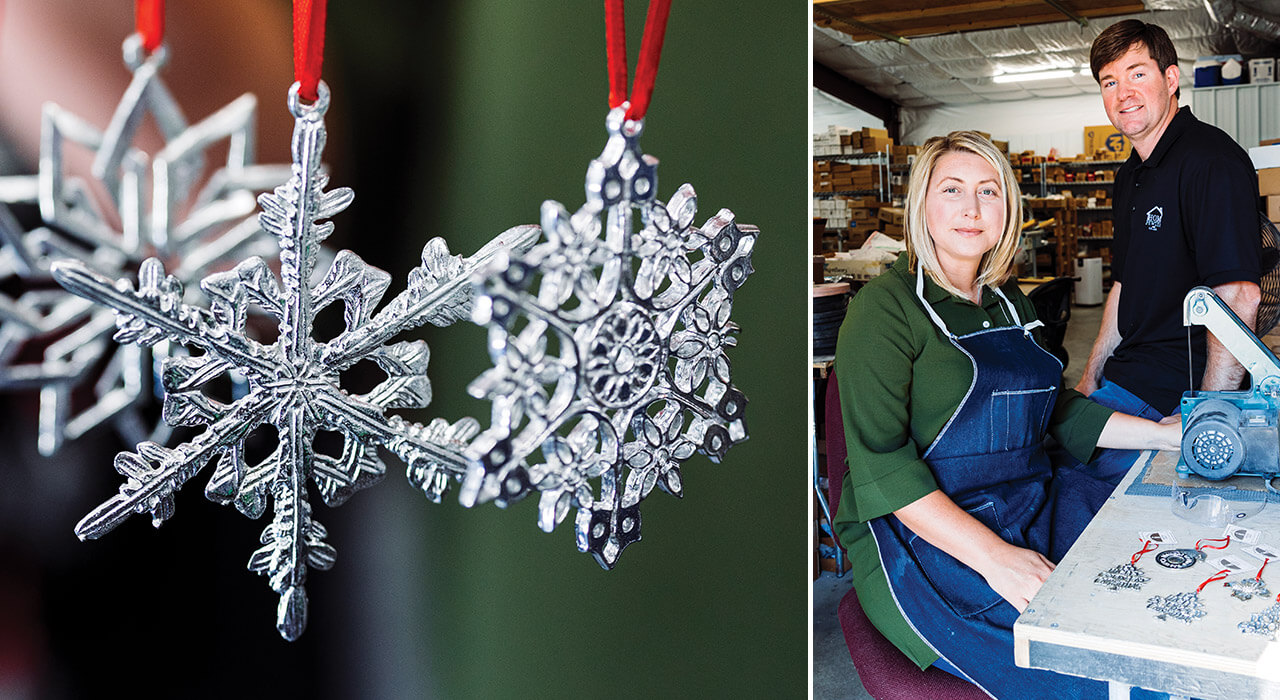 Amanda and Matt Morgan are the stewards of their family’s pewter-making business, offering more than 800 handcrafted designs — including a wide selection of North Carolina-themed pieces. photograph by Matt Ray Photography

In Lenoir County, the Morgan family crafts silvery pewter snowflakes that dangle elegantly, far too pretty to put away when the holidays are over. Pewter — a metal alloy of tin, copper, and antimony — has been prized for its durability since at least the Middle Ages. Kent and Martha Morgan found their way to the craft in 1980, after watching a pewter-making demonstration at Colonial Williamsburg. Over the next 40 years, they built a thriving business, and eventually passed House of Morgan Pewter down to their nephew Matt, his wife, Amanda, and their three children. With every ornament, keychain, and piece of jewelry that the Morgans cast, they continue both a family tradition and an art form that goes back centuries.

The snowflakes were a happy accident. In 1983, New Bern resident Billie Ruth Sudduth enrolled in a basketmaking class to unwind from her demanding job as a school psychologist — and knew almost instantly that she’d found her passion. The following year, while demonstrating the craft at Tryon Palace, she rescued a failed four-leaf clover by connecting two of them, and her signature design was born. Her “Carolina Snowflakes” eventually hung in the White House as well as homes around the world. Sudduth died in 2021, but her baskets live on in private and public collections, and weavers still turn to her pattern booklet to learn how to make intricate snowflakes that never melt away. 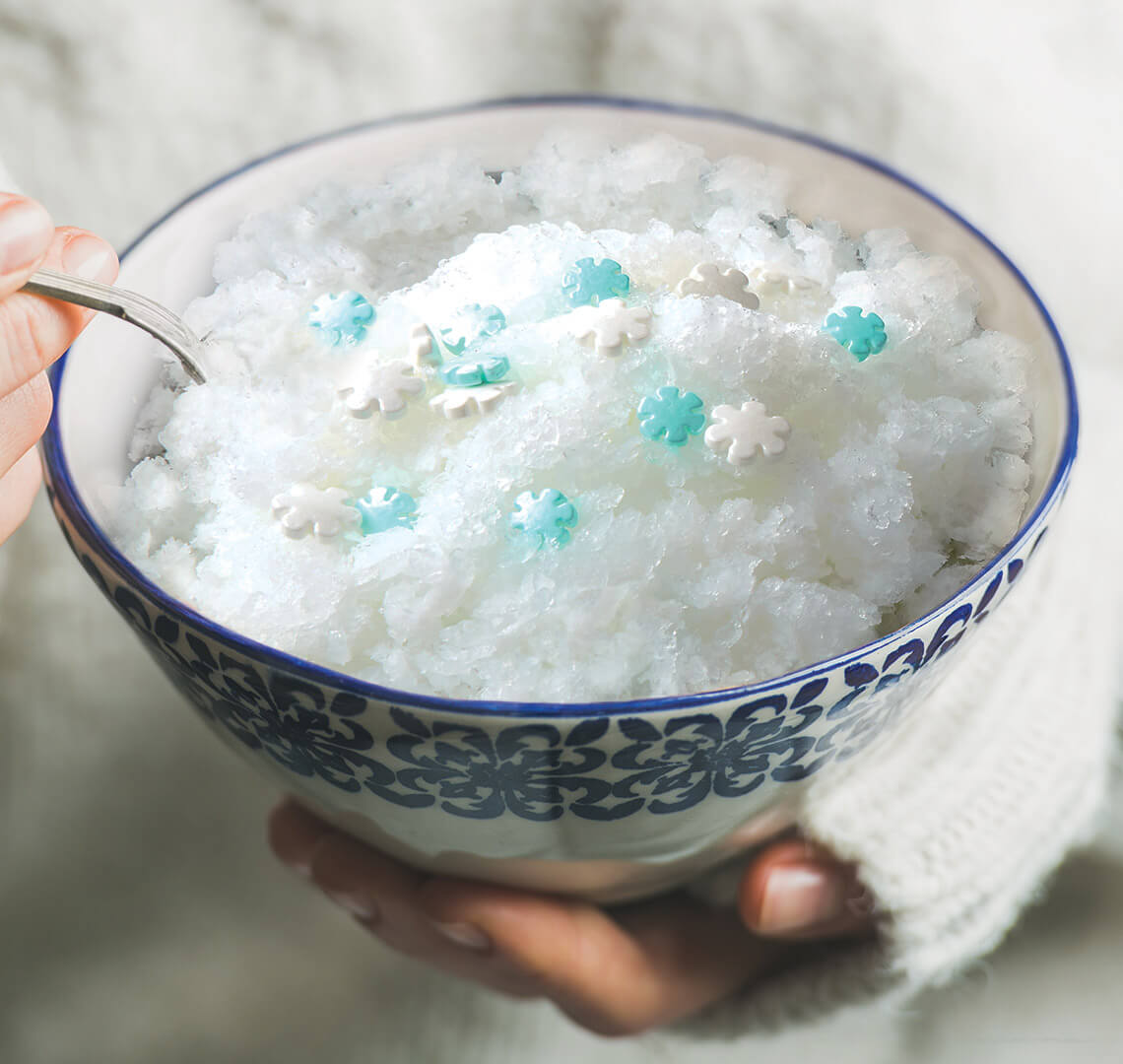 There’s nothing quite like a bowl of snow cream made with freshly fallen snow. photograph by Foxys_forest_manufacture/iStock/Getty Images Plus

You know the recipe — if such a simple concoction can be called a recipe. Gather milk and sugar and vanilla and snow, freshly fallen; stir well and enjoy. In parts of the state where snow is not a guarantee, generations of North Carolinians have learned to celebrate the white stuff as much as possible. We might prepare by placing a bowl or a dishpan in a prime location outside — to catch the cleanest, fluffiest flakes, of course. And we watch the winter sky with anticipation, waiting for those three magic words: “chance of flurries.” 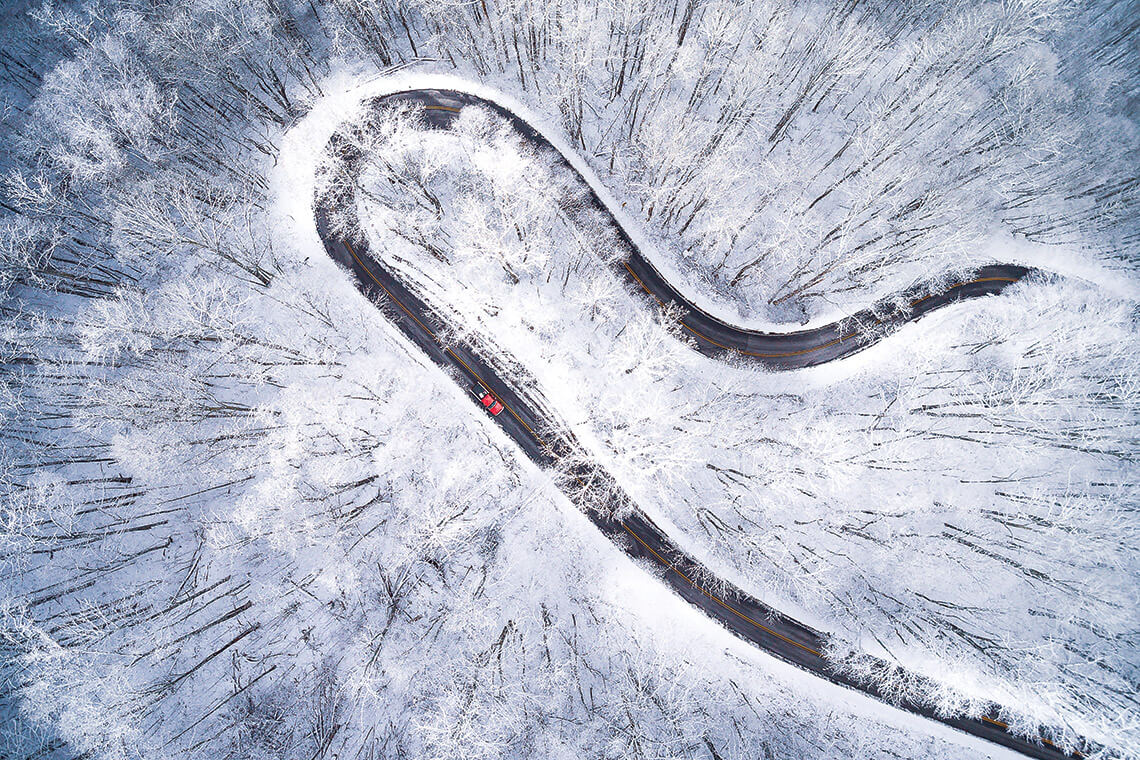 Enjoying the scenic route allows us to admire the wonder of winter in North Carolina. photograph by RYAN KARCHER PHOTOGRAPHY

This season has a way of slowing things down, of asking us to consider the bright, crystalline brilliance of a world frosted over. Wherever we’re traveling — along winding mountain roads like this one near Glenville (pictured), over rolling hills in the Piedmont, through acres of farmland in the Coastal Plain — whether we get a heavy snow or a gentle dusting or a thin layer of rime, we’ll pause to admire the wonder of winter in North Carolina. We’ll take it slow to take in the show.