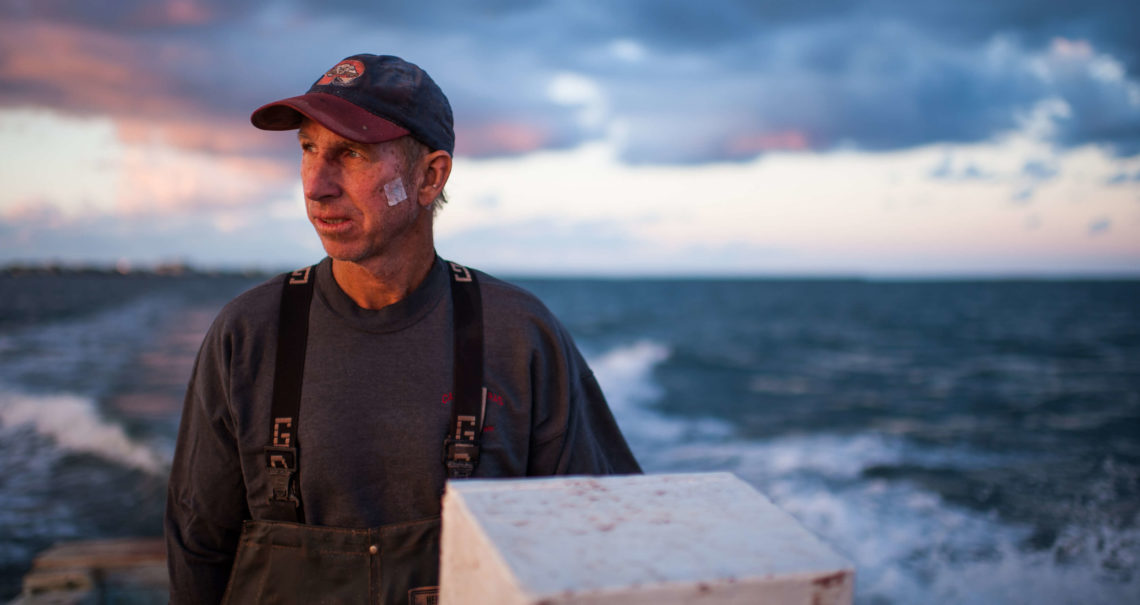 SPONSORED BY Got to Be NC Seafood

It’s 6:03 a.m., and October’s first light casts a pinkish-orange glow over Pamlico Sound. Dockside, 65-year-old Bob McBride greets two helpers before the three steps aboard John 3:16, his 25-foot fiberglass fishing boat. For the next 45 minutes, the fishermen motor east across the Pamlico Sound until they reach an outcropping of wooden stakes rising from the water. The stakes support a series of nets, and McBride navigates his boat into the center.

McBride is a pound netter, one of the world’s oldest forms of fishing. Long before Europeans came to the mainland, Native American tribes submerged logs into the Chesapeake Bay to capture Spanish mackerel in their netted maze. For the past 40 years, McBride has followed that same method, as twice a year he sets out a series of nets that form a sort of live aquarium in the Pamlico Sound. And like the Native Americans, rather than casting a line or throwing a net, McBride lets the fish come to him. “Instead of me having to work the nets, the nets work for me,” he says.

Today, from this 36-by-36-foot “holding area” where McBride has parked his boat, he watches as the Pamlico’s fish swim through his net-constructed funnel. He can’t help but feel giddy. “After so many years, I still get excited at the sight of a big bunch of fish swimming around,” he says.

From our miles of coastline to deep mountain streams, North Carolina is a national leader in seafood production. Look for the Got to Be NC Seafood logo to identify quality seafood products at your local seafood market or retailer. 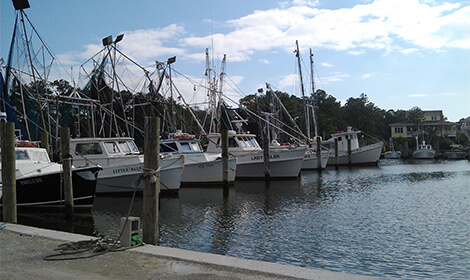 This time of year, flounder and sheepshead dart through the holding area. With their dip nets ready, the three men set about their task of manually sorting through the fish, collecting the ones they want to keep and releasing the others. That’s the thing about any pound-netting harvest, McBride explains: “You can’t add to it, but you can subtract from it.”

At the end of the morning, they head back to the dock with a 1,300-pound haul, most of which will make its way to New York, Philadelphia, and even Canada. McBride and his fishing partners are back home by noon. They likely won’t head out again for a few days — it just depends on the weather. This time of year, McBride looks forward to chilly days. “After a cold front comes, we’ll be harvesting fish,” he says. 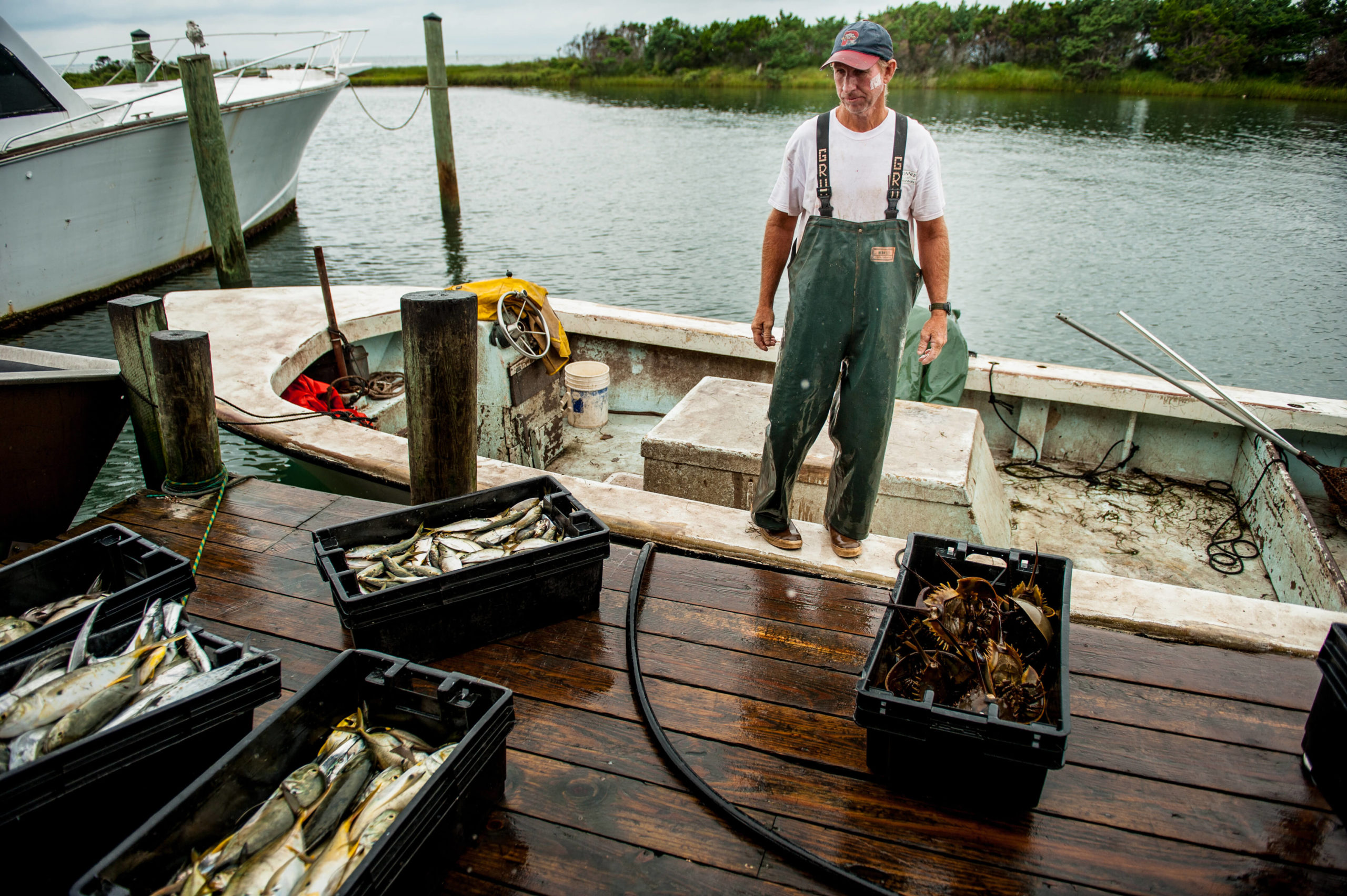 Reflecting on a day’s haul photograph by Daniel Pullen

McBride calls pound netting a “clean way to fish,” a sentiment echoed far and wide by fisheries officials. All fish are caught alive, and studies have shown that pound nets do little harm to the turtle population.

But between the expensive equipment and the labor-intensive net-mending process — not to mention the rigor involved with sinking 28-foot-long poles — pound netting is not for the faint of heart. “You never know what you’re going to catch,” McBride says. “And since your gear is stationery, you can get destroyed if a storm comes up.” 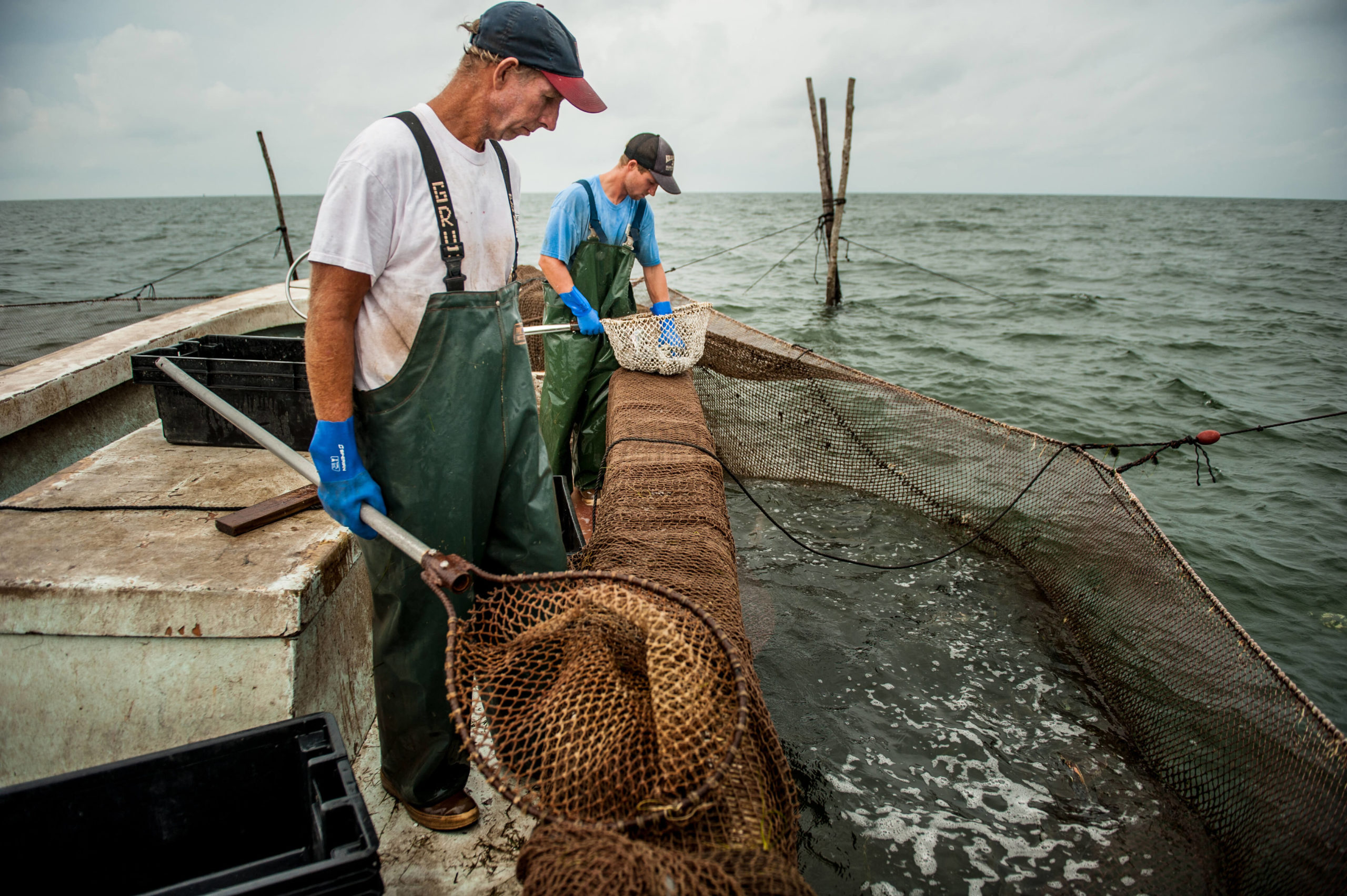 Pound netting is one of the world’s oldest forms of fishing. photograph by Daniel Pullen

McBride only fishes seven months out of the year, starting around the first of May and ending around Thanksgiving. Summer’s southwest winds bring Spanish mackerel, pompano, ribbonfish, and star butterfish. Then, around mid-September, he goes through the labor-intensive process of switching the nets out for flounder nets.

In the four decades McBride has fished Pamlico Sound, he’s set his pound nets in the same locations, a control that presents a unique opportunity to witness coastal and industry shifts. The changes he’s seen include a new sandbar along the reef. “And erosion in the last 10 to 15 years has changed my fishing a lot,” he adds.

But the weather itself has probably had the most significant impact. “Fish seem to be moving further north or not going as far south in the summertime,” McBride says. “Everybody who fishes along the coast, whether you’re in South Carolina or Georgia and even up to New York, you’re seeing big changes in the fisheries.”

As the waters warm and regulations heat up, it often seems the laws of nature and the laws of man are in cahoots to make life harder for commercial fishermen.

According to current regulations, flounder fishers get 19 days to fish — down from 26 days last year. And because they depend on cold fronts to come through, there’s a chance they won’t get any fish at all. “You could go 19 days and never have a shift of wind, so you would do all the work for nothing.”

For North Carolina’s few remaining pound netters, the equipment and labor are getting too expensive to make it all worthwhile. “At one time, I bet there were 25 different crews on the eastern side of the Pamlico Sound,” McBride says. “By 2000, there were only two of us left fishing in the sound in the summer.”

A Proud Line of Fishers

In spite of McBride’s challenges, there are also reasons for him to keep at it — even though he advised his son and grandson to make their futures in other industries. “I like the lifestyle it gives me,” McBride says. “In those four months out of the year when I’m mending and painting the nets, I’m doing it at home. Over the years, pound netting has given me a lot of time with my family.” 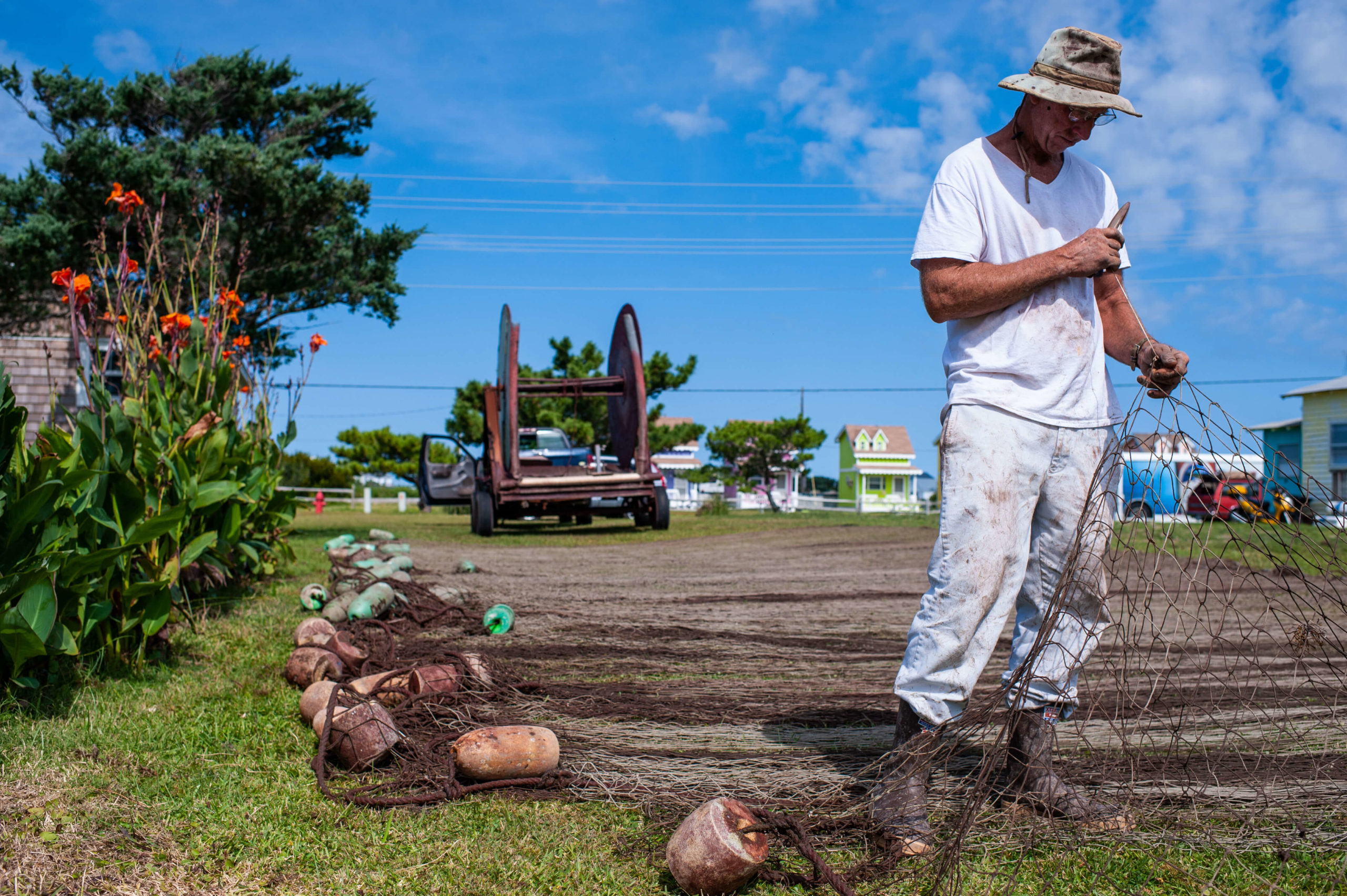 And McBride appreciates his connection to his fellow fishermen. Although he never expected to make his living as a fisherman, he’s part of a long tradition: “Before all the tourists and the big houses; before this was even an industry, there were fishermen here making a living,” he says. He worries that many U.S. consumers are disconnected from the source of their food — and worse, that they perceive fishers as people who don’t care about the environment.

But McBride says nothing could be further from the truth. “I’ve seen things that very few people have ever seen. I’ve seen storms come up and go away. I’ve seen rainbows light up the sky that are so brilliant they look like they’re falling in your nets. I’ve seen birds flying and fish swimming, all kinds of critters,” he says. “I haven’t made the most money but certainly I’ve fed a lot of people. I feel so blessed to have done what I’ve done.”