In the North Carolina foothills of the ’70s, there were no “seafood restaurants.” What there were, were fish camps. They were usually located on a dirt road, and as a child, I longed to go to one the way I longed to stop and touch cotton in a field on trips through eastern North Carolina. Five decades later, I finally got the chance to eat at a fish camp, and, blessedly, the visit was a step back in time. 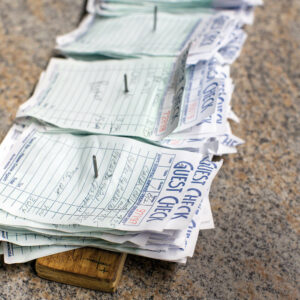 Receipts are stuck on nails on the same loose board. photograph by Revival Creatives

Because a scant blessed thing has changed at Tex’s Fish Camp in Connelly Springs since 1972. That’s when Tom Burns announced to his family one night that he was selling his lumber business and opening a restaurant where all the family — and we’re talking 10 children born in an almost 26-year span — could work. Tom — who, at 6-foot-6, was quite the presence in his Stetson hat and a fringed buckskin coat, his daughter Jackie Crump says — built the long, one-story brick building in a dirt parking lot. Now, 49 years later, the family still walks the same concrete floor under the same fluorescent lights mounted on the same low, stippled ceiling to wait on customers in the same high-backed wooden booths. Servers still stick their orders on nails hammered into a loose board, where grandchildren scribble their names when the grown-ups aren’t looking.

Tom’s daughter Tommie and son Robin run the kitchen; Jackie runs the front; daughter Jeanne presides over the office; and son Tex, in his 70s, is the greeter outside, where customers wait on benches made from Ford and Chevy pickup gates, complete with logos and license plates. At one time or another, most of the 21 grandchildren have worked at the fish camp, too.

In its early days, Tex’s offered a cafeteria- style lunch so that local furniture plant employees could eat during their 30-minute breaks. Now, dinner is served from 4 to 9 p.m., and customers begin arriving at 4:05. “Hello, girls,” Jackie says to two women walking in as the phone starts ringing with take-out orders. Everything on the menu is made in the kitchen, including the tartar and cocktail sauces, and hush puppies that are crispy outside and grainy, not doughy, inside.

Flounder fillet and Calabash-style shrimp are the top sellers, and the light, “crackermeal” batter of flour and ground crackers means that you can still see and taste the fish and shrimp within. For this coleslaw aficionada, Tex’s finely chopped slaw is flawless, with a perfect balance of sugar and vinegar, which explains why it’s found at every local cookout, church supper, and civic gathering. The pinto beans simmer with fatback for two hours. Peanut butter pie and coconut, orange, and piña colada cakes are on view in a refrigerated case. 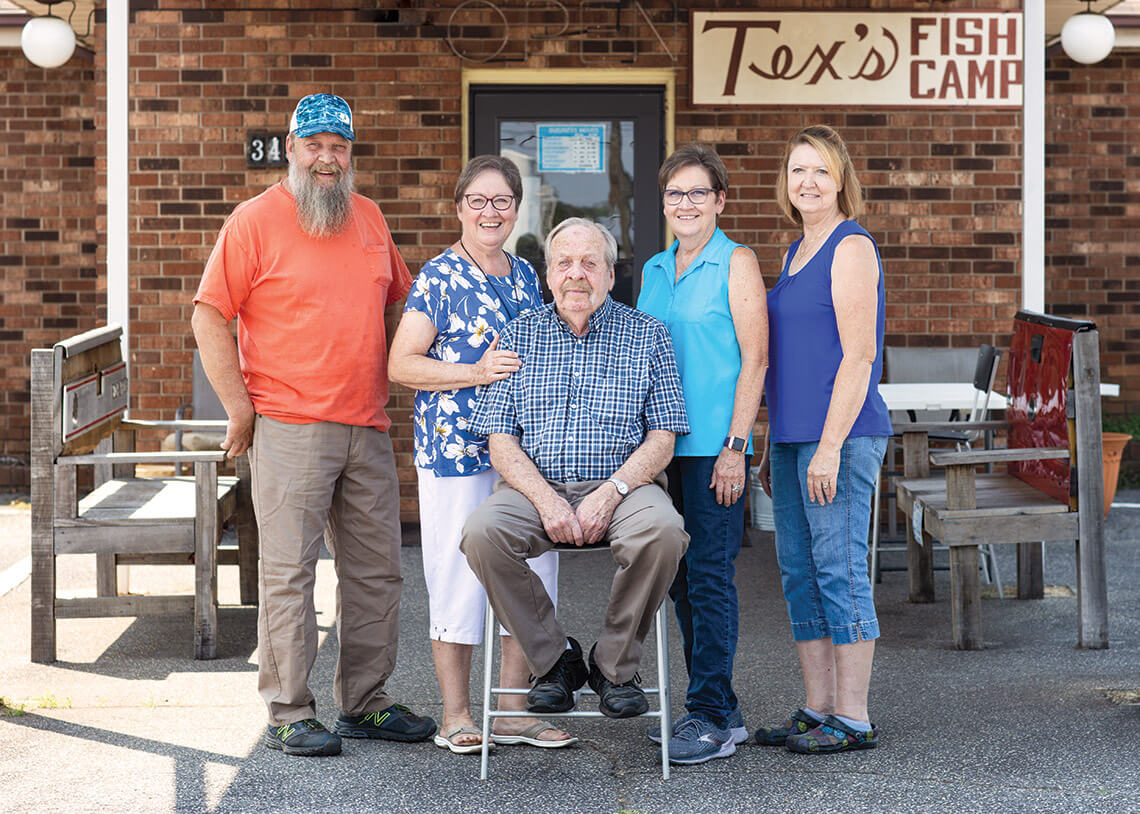 Generations of families routinely come to Tex’s, and so do complete strangers who’ve found the restaurant’s five-star rating on their phones while traveling I-40. The out-of-town diners probably aren’t aware of Tex’s presence in the community — its history of holding free, donation-only fundraisers for victims of cancer, fires, and other local tragedies. When the restaurant was only open for takeout during the Covid-19 pandemic, every order contained a sticky note bearing a handwritten message of hope.

When you visit, make sure to give a nod to the framed picture of Tom’s wife, Bernese, married at 16 and mother of 10 — some of whom are still cooking, still serving.