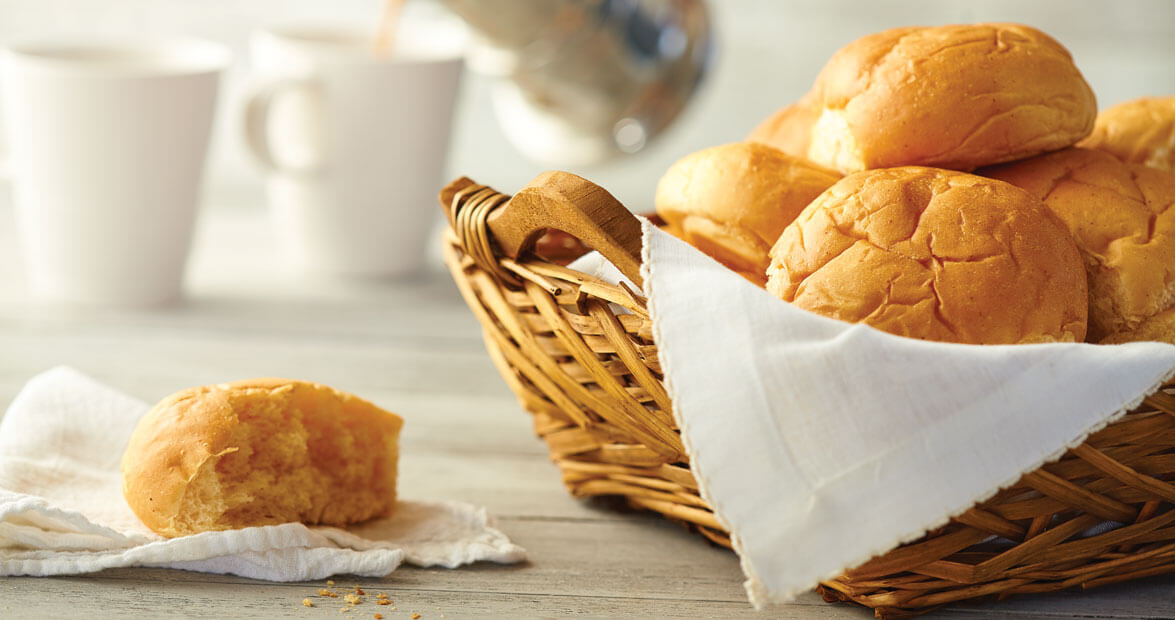 The first time Desty McEwan made lovefeast buns for her congregation at King Moravian Church, she couldn’t tell if people were enjoying them. She was singing in the choir (still does), and couldn’t see any faces. It wasn’t until later that she went downstairs, down to the spot where the servers were, and saw that none of the buns had come back. She felt better.

That was years ago, and just for one congregation. This Christmas, Desty’s Winston-Salem bakery, Mrs. Pumpkin’s, will make close to 24,000 lovefeast buns. Nearly every Moravian church in town orders them from her.

The recipe is simple and traditional. The result is a cross between a sweet roll and a hamburger bun, with hints of orange and mace that you can smell as you lift it up to take a bite. The guy who makes them here, Gary Zafuto, has been an employee for 19 years. “I was born working here,” he jokes. He still follows the recipe exactly. Still tastes every batch. You have to. “Cooking is an art,” Desty says. “Baking is a science.” 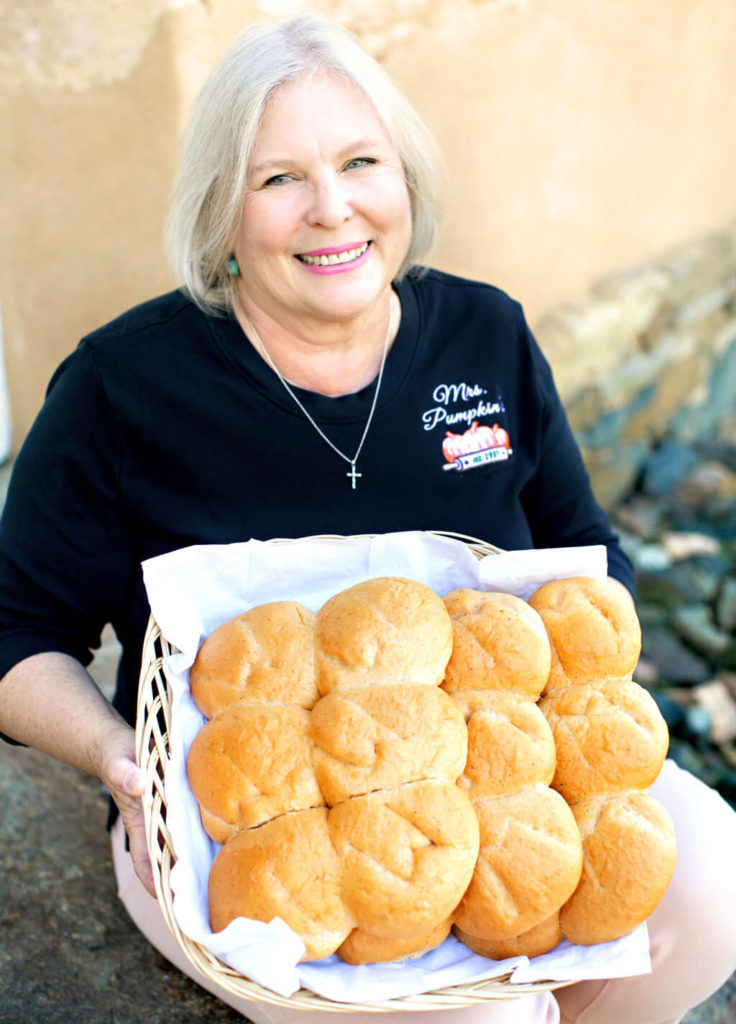 The process Gary and two helpers employ to make the buns is a combination of simplicity and repetition — elements that are very much a part of the loveseat itself.

The tradition started in the Moravian Church long ago as a form of celebration. Dieners (German for “servers”) pass out a mug of sweetened coffee and a bun to each person. The congregation eats, drinks, and sings. “For Moravians, the lovefeast anchors us to Moravian tradition,” says the Rev. Ginny Tobiassen, pastor at Winston-Salem’s Home Moravian Church. “It’s unique. Every Moravian knows it.” The lovefeast is less formal than Communion — it’s not a sacrament, after all — and it’s celebrated several times a year: on, say, church anniversaries, festival days during Holy Week, and on Christmas Eve. Especially on Christmas Eve. Churches that typically order 15 dozen lovefeast buns will order 50 dozen for the holidays, Desty says.

And so, for days on end, Gary and his helpers will crank out thousands of buns in the back of Mrs. Pumpkin’s store at the end of a strip mall on Reynolda Road in Winston-Salem. The three bakers mix, cut, roll, bake, and cool in a rhythm like bees in a hive. It’s a lot of work. “A nightmare,” Gary says mischievously. 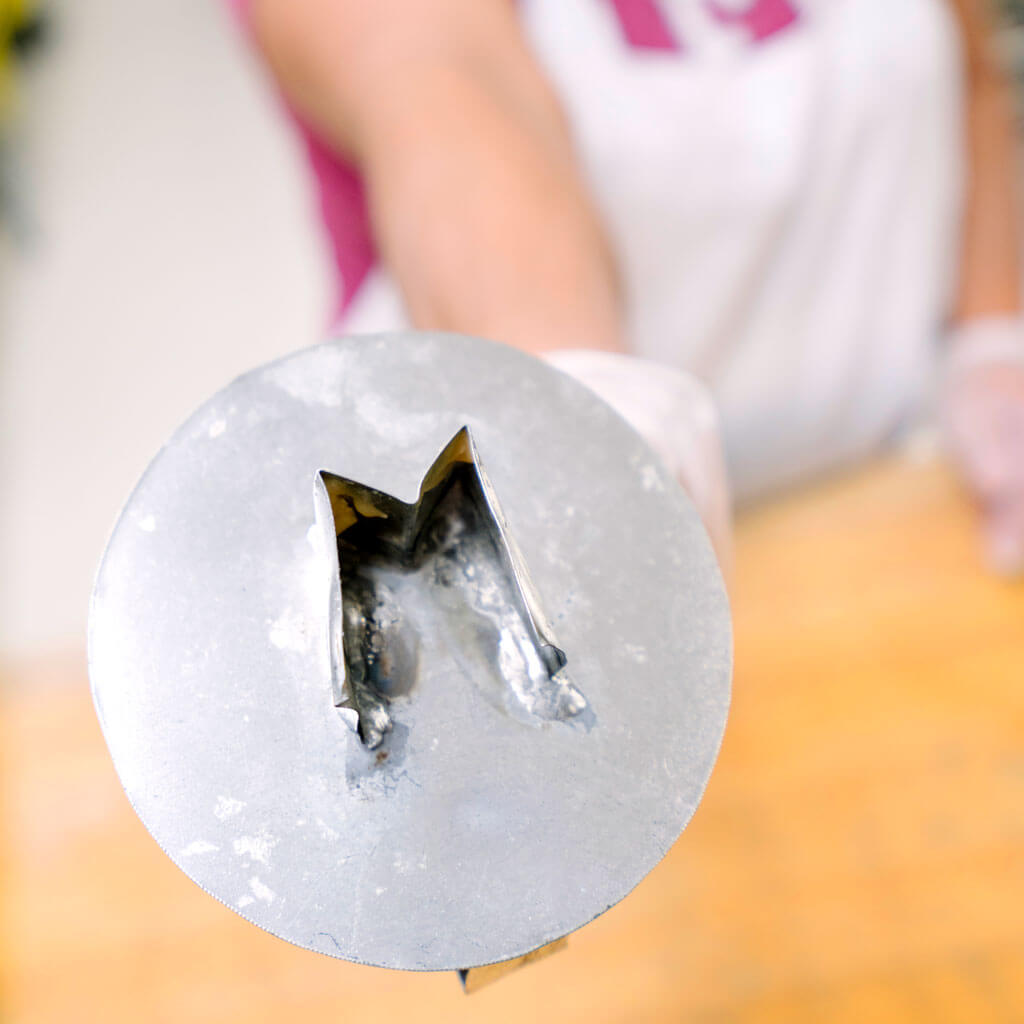 Every lovefeast bun made at Mrs. Pumpkin’s is stamped with this mark. The joke: It could be an M for Moravian, or possibly a W for Winkler Bakery, the first in town to bake Moravian buns. photograph by Adam Mowery

But the result is remarkable, if understated. Desty’s husband, Don, delivers lovefeast buns to churches around the area, including a few Methodist and Baptist congregations. Others churches pick up their buns. Some are shipped as far away as New Bern. All the buns are fresh. Like the buns, most of the menu items here at Mrs. Pumpkin’s are simple. There are Moravian chicken pies and pastas, casseroles and cakes. The business started in 1985 in the McEwans’ basement in nearby Tobaccoville, and in the early 1990s, they decided to make a go of it in a larger space. At first, they survived by making box lunches that medical sales reps would buy to take with them when they visited doctors. But when regulations around pharmaceutical sales changed and made the giving of gifts, even food, much more difficult, the McEwans started to look for something else.

Chicken pies helped fill the void, but then another opportunity arose. In 2008, Jones Bakeries in Winston-Salem shut down, and the Moravian leadership in town started looking for somebody else who could make buns. They called Desty. The folks at Jones passed along some equipment and know-how. And slowly, over the years that followed, the demand for Mrs. Pumpkin’s lovefeast buns — as well as her sugar cakes for Christmas Eve — grew. More and more churches started to order from her. Winkler Bakery, the Moravian baker across town in Old Salem, might be the baker of legend here, but in terms of sheer volume, Mrs. Pumpkin’s wins out.

And so, over two and a half days in December, the bakery is focused on making one thing. It’s a process that Desty loves, even if she no longer directly has her hands in the process. “What I loved,” she says, “was the rolling of them. There was something very nice about the repetition of taking balls of dough and rounding them. And the smell of yeast? It’s very satisfying. It smells amazing when we’re making lovefeast buns.”

As she’s describing the process, a thought occurs to Desty. “It’s interesting to me that you can make 24,000 of something, and the last one looks as good as the first one,” she says. “That’s the Moravian way.”