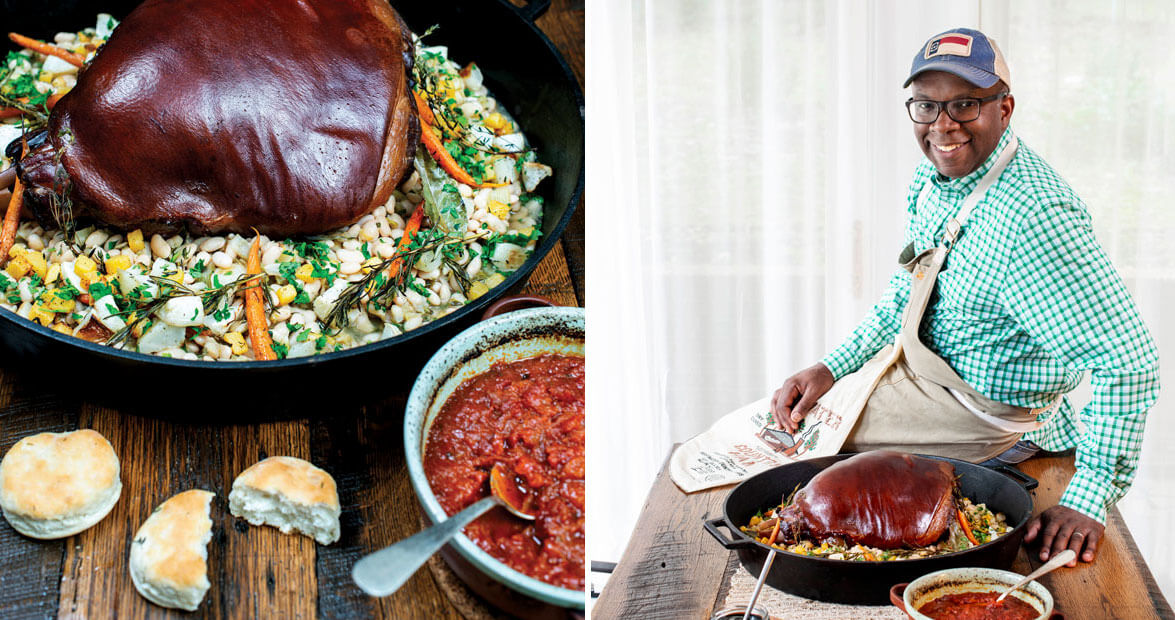 Durham chef Ricky Moore has built his career on seafood, but his favorite memory of Christmas revolves around a country ham. Not the stereotypical holiday ham, shingled with pineapple slices and cherries. “We didn’t have the fruited ham,” he says with a hearty laugh. No, they had something more glorious than that. Moore’s step-grandfather, James Lofton, made country ham and beans. “It was just succulent,” Moore says. “It was a one-pot dish that made sense.”

In his New Bern kitchen, Lofton would begin with a large, dry-cured country ham, which he then soaked in water and rinsed several times to remove some of the salt from the preserving process. In a large stewpot of big lima beans, chopped onions, green peppers, crushed red pepper, and bay leaves, the ham would simmer for hours on the stove. By the time Moore, known then as “Ricky Boy,” arrived at his maternal grandparents’ home for Christmas dinner, that ham was falling off the bone. “You could pull chunks of meat off it,” Moore says, the memory still fresh. “Everybody came over and got that portion of it.”

The sugary smell of sweet potato pies and the savory aroma of turkey and dressing perfumed the house. As the oldest grandchild, Moore was a frequent visitor to his grandparents’ home, just 10 minutes away from his parents’ house. Witnessing the Christmas feast come together taught the would-be chef that culinary miracles start with humble ingredients. Today, Moore, 49, is the chef and owner of the line-out-the-door Saltbox Seafood Joints, both in Durham. His dishes, inspired by American fish camps and waterside seafood shacks and created using only what’s fresh from North Carolina waters, have earned him national acclaim. But when he first started out as a chef, his biggest influence was about as far away from trendy Southern dining as you can get.

Like his father and step-grandfather, Moore joined the Army. He fed hungry soldiers as a food service specialist and traveled the world. After his military service, he enrolled in the Culinary Institute of America, and then honed his skills as a chef in restaurants in Chicago, Washington, D.C., and Paris, working in some of the best kitchens of the 1990s.

Yet Moore was greatly influenced by the military kitchen, where good eating was a morale booster. “When a soldier is away from home, it’s imperative for them to get a lot of support from the food service,” he says. “What else do you have to comfort you? A photograph of a loved one, a letter, and food. Food is the ultimate comfort.” The ability to take simple food and make the most of it is a trait that follows Moore no matter whom he’s feeding. And it’s the lesson he first learned by watching his step-grandfather cook that ham.

“His cooking was his gift to his adopted family,” Moore says of Lofton, who married Moore’s grandmother late in life. “It was his preference not to be extravagant,” he says. “His dish of ham and beans was his humble offering to those he loved.”

Even as a child, Moore, then styling an Afro and turtleneck, was an adventurous eater. “A kid shouldn’t like a dish like that,” he says with a chuckle. “But it made me feel like a big boy — I’m going to eat grown-folks food! My uncles got a big plate and let me get one, too.”

The holiday meal was served buffet-style. More than 25 uncles and aunts, cousins and friends came through the line, filling plates from the dishes spread out on the counter. There was also turkey and dressing and “a pot of salad” — meaning a mix of collards, kale, and creasy greens with white cornmeal dumplings and salted pig tails. Friends and family would scatter throughout the house or find a seat on the screened-in porch to catch up on news, play card games, and bond over classic Christmas hard candies and cracked walnuts and pecans. The next day, the ham reappeared with onion and mustard on leftover biscuits or white bread.

Moore has taken this ham-and-beans tradition and made it his own. First, he looks for a bone-in, chestnut-colored country ham that feels heavy, dense, with a touch of mold on it. Then, he inhales: “You should be able to smell a vintage, antique saltiness,” he says. Using his step-grandfather’s method, Moore stews the ham low and slow, but with cannellini beans, carrots, turnips, rutabagas, rosemary, garlic, sage, thyme, and cinnamon. “I’m bringing in some different elements,” he says. “You get the savory from the ham and then the sweet from the rutabagas and carrots. And then the earthiness from the thyme, sage, and rosemary. I’m taking that personal experience and bringing it forward.”

Like Lofton, he cooks his ham so tender that instead of cutting it with a knife, you can scoop up the meat and beans with a spoon. “The beans make gravy with just their starch,” he says. “It’s still pretty darn good.” Moore likes serving the dish with flat, tender, hand-formed biscuits made with lard and flour, just like his step-grandfather’s. They’re a taste of home, but it’s the main dish that remains the taste of Christmas past. “The beans were a supporting cast,” he says, “but the star was the ham.”