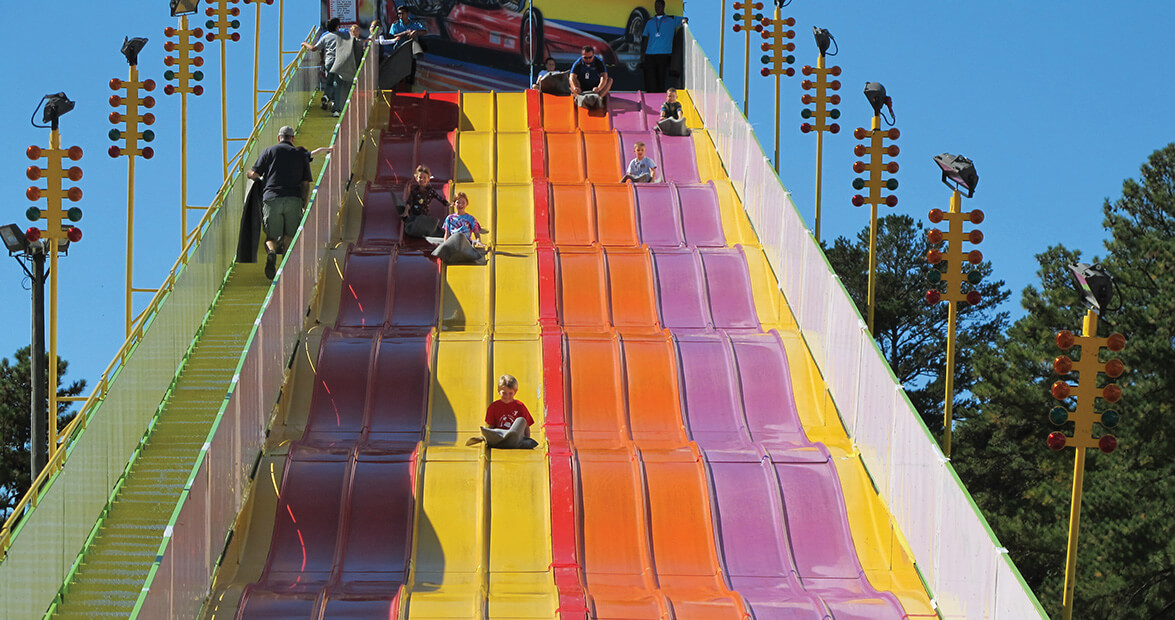 The Super Slide. For a full calendar year, he’s talked about the Super Slide. That was his favorite. Not the head-size snow cone you bought him for four bucks. Not the helicopters and construction machinery parked on an island out in the lake. Not the racing pigs you did not see, but ended up explaining for weeks on end, often at bedtime. How and why a racing pig works its way into nighttime prayers and ablutions: This is the kind of thing you’ve learned not to question.

Also good, but not as good: the frozen lemonade that made his little brother actually groan with pleasure. The funnel cake. The deep-fried barbecue, the deep-fried mac and cheese, the Krispy Kreme burger. The dragon ride that lumbered up into the air and down again. The wash and spin of all the signs, the loudspeakers, the barkers. The spendy bicycle taxi you rode from the parking lot. But was any of that the Super Slide? It was not. Daddy. Daddy. Over and over again. Daddy, do you remember the Super Slide?

Right away — as in, first foot out of the car — you step in gum. It is not a crisp fall day. It is the other kind of Carolina October, the kind that isn’t yet ready to give up summer. From the backseat, though, The Toad, then 4 years old and fresh off a fairly fierce car ride, says, “I love this day.” Write that down, OK? Get the gum off your shoe and find a pen. You think you’ll remember these things. You always think that. Then you forget. He’ll have something to say about the evening sky. His first peanut brittle. The banjo player in the bluegrass band, who says, just as you walk past, “Well, y’all, this is our final set at the State Fair.”

The toddler’s in a backpack, but the 4-year-old is loose, so here’s what happens: Somebody official gets you to put a sticker with your phone number and address inside his shirt, in case he gets separated from you. In case he gets lost. He wants to know what lost means, how a thing like that might happen. He’s a cautious boy. Lots of questions. You tell him not to worry, that nobody’s getting lost, that everything’s going to be fine. “Then why do I need a sticker?” he wants to know. Distract him with livestock. With plastic swords. With a flashlight given away by a disaster insurance company.

Work your way past the clowns on stilts, the acrobats hanging from streamers, the fire-safety demonstration. Feed the boys. Feed them again. Find the kiddie rides. Somebody who’s leaving, two red-faced children of his own in tow, hands you a ream of sweaty tickets. “Here,” he says. “Just take these.” It does not quite feel like a gift, even if it is a kindness.

The kiddie coaster. The aforementioned dragons. The Ferris wheel, which does not seem kid-size at all, where you try very hard to conceal from the big one your serious fear of heights (the little one’s back on the ground with his mom). And then? The Super Slide. Which is not that super, in your estimation. It is 15 minutes of waiting in line, of cajoling and threatening and begging the child to behave, to wait, to use good manners, even though he is hot and tired and super-sugared and has never actually waited in line before and thus has no idea what the hell is going on. The slide itself: maybe 70 feet. You sit bobsled-style on a burlap bag. A couple of humps. Not so steep. You land on a gym mat. And that’s the whole thing.

He loves it. It is exactly his speed. He wants to do it again. And again. Somehow, it’s evening now. The sky purples, the breeze freshens. All around you, the same dance: One more, but then we have to go. It’s hard to imagine that all these booths and games and people will pack up and ride away. It’s hard to understand that you’ve been here however many hours. Maybe time doesn’t really operate at the fair. Finally, you take them home. Because the little one’s asleep in his pack. Because somewhere it’s an actual o’clock. Because you’re out of tickets. Because you’re tired. Because one of these times down the slide has to be the last.

And for one year, you’ll be sorry. You’ll remember driving home into the rising moon, wishing, already, that you’d let him ride one more time. The Super Slide. He doesn’t understand that the State Fair comes only once a year. That, like a racing pig, it’s an article of faith. When it comes back, you’ll tell him each time he asks, we’ll go. You’ll promise: Yes, we can ride the Super Slide. Yes, as many times as you like. Yes, you’ll tell him, all year, as much as possible. And this year, you’ll tell him, your brother can ride, too.