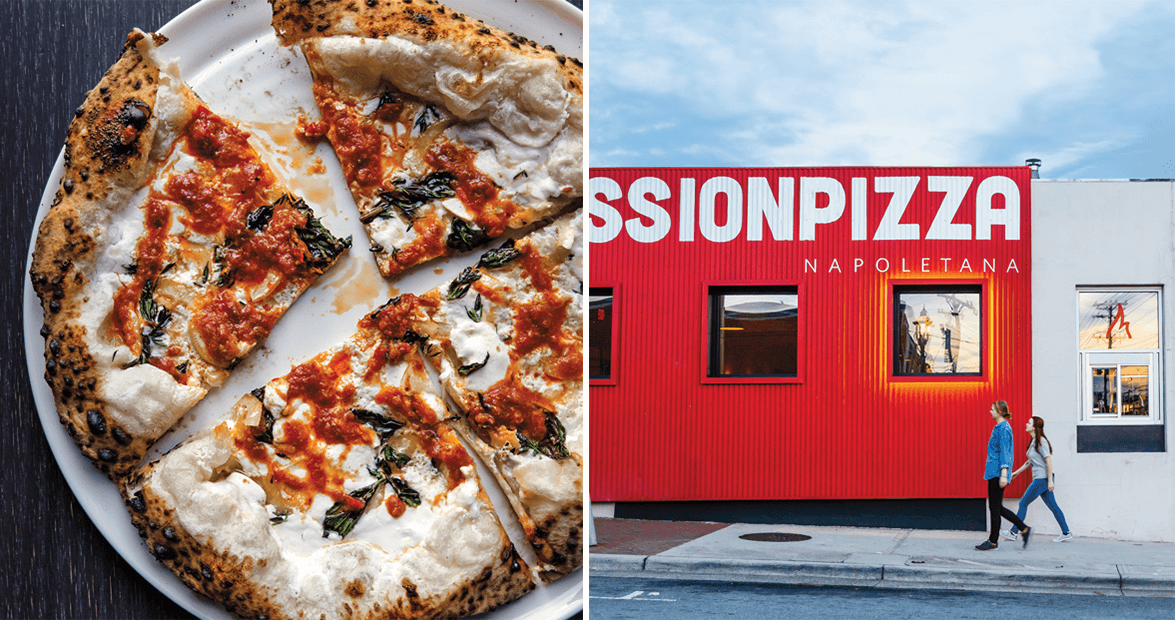 At Mission Pizza Napoletana in Winston-Salem, chef and owner Peyton Smith doesn’t just make a pizza. At least, not in the way that most restaurants make a pizza: stretch the dough, top it, slide it into an oven, pull it back out, and drop it into a cardboard box for takeout or delivery. No, Smith makes a pizza like it’s a meditation on the art of pizza: He scrutinizes it, coddles it. Half a minute after it enters the hulking wood-fired oven that dominates his open kitchen, he’s back with his paddle, tilting your pizza toward the hot embers for the right amount of charring, turning it so the cheese melts just so, lifting it into the storm of smoke rolling inside the oven to finish it off.

He only has a minute to get it right. At 850 degrees in his Italian Stefano Ferrara oven, a pizza cooks in 60 to 90 seconds. And then, bam, it’s done, sliced, and landing in front of you, still smoking. “You have no margin for error,” he says. “You have to be engaged all the time. That’s the part I like.” 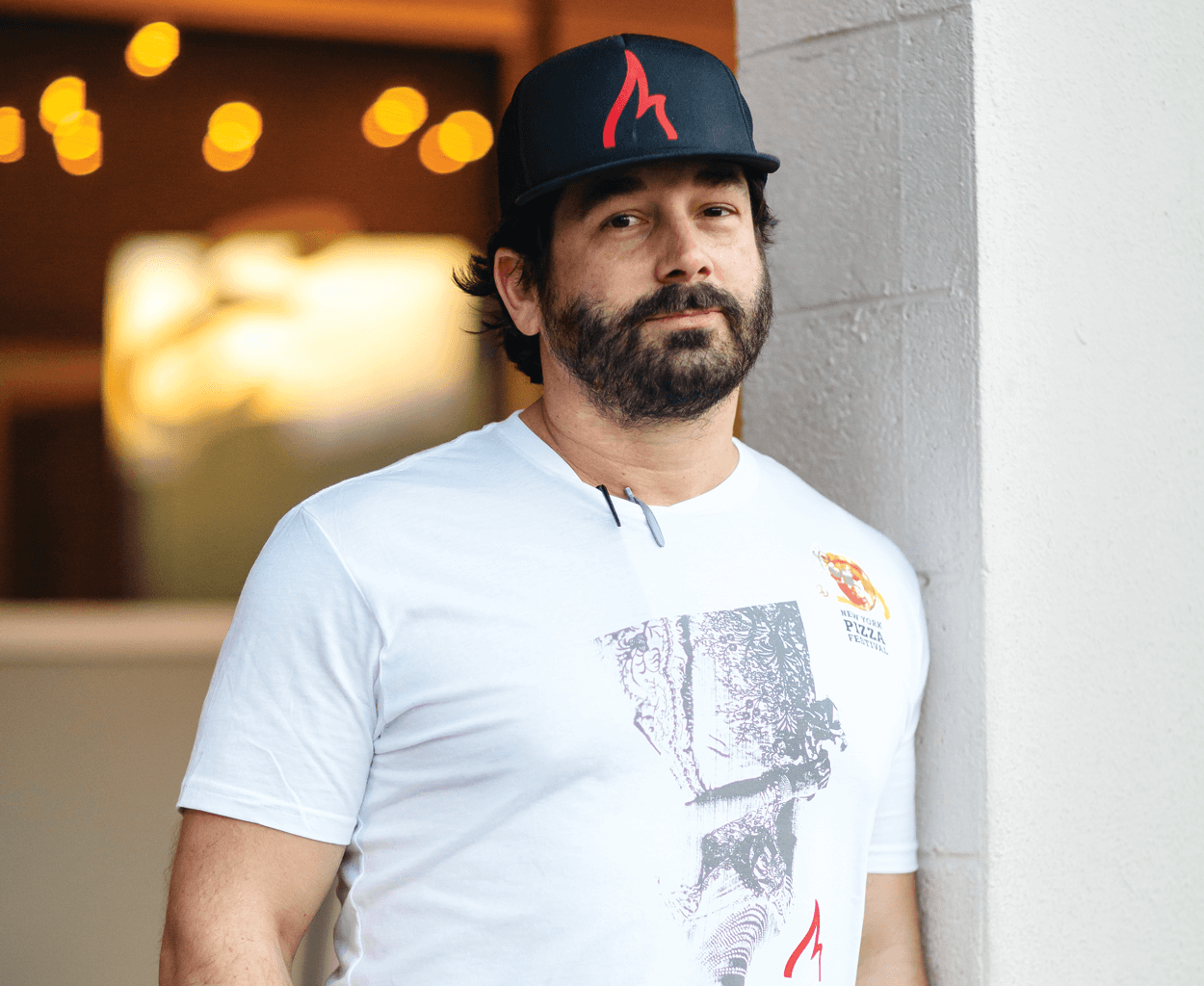 Mission Pizza owner Peyton Smith knows that a pizza is only as good as its crust. photograph by Tim Robison

Don’t ask for takeout. Oh, he’ll do it. But he doesn’t like it. Smith has been known to give first-timers a pizza if they’ll agree to sit down and eat it immediately instead of taking it to go, so that they’ll know what it’s supposed to taste like. “Eat the food the way it’s intended,” he insists. “I just want people to have it right.”

Smith is serious about pizza in the way that some people are serious about art, philosophy, or literature. Ask a question about anything — from how a wood-burning oven changes through the week as it absorbs heat to why he ages his dough — and you’ll get a deep, thoughtful answer. One of the few embellishments in his minimalist restaurant in Winston-Salem’s Arts District is a mural that defines the word “mission”: “a strongly felt aim, ambition, or calling.” Everything about Smith’s business is exactly that.

But before you rush into Mission Pizza, first know what you’re getting: This is Neapolitan pizza, not your basic pepperoni pie. Among pizza aficionados, Neapolitan is the top of the mountain. It’s about the dough more than the toppings. It’s about the dots of charring — called leoparding — around the puffy crust, called the cornicione. It’s meant to be made quickly and eaten just as fast, pausing only to appreciate the yeasty, sour aroma of crust, and the balance of sweet tomato and creamy dairy against the slightly bitter browned bits. 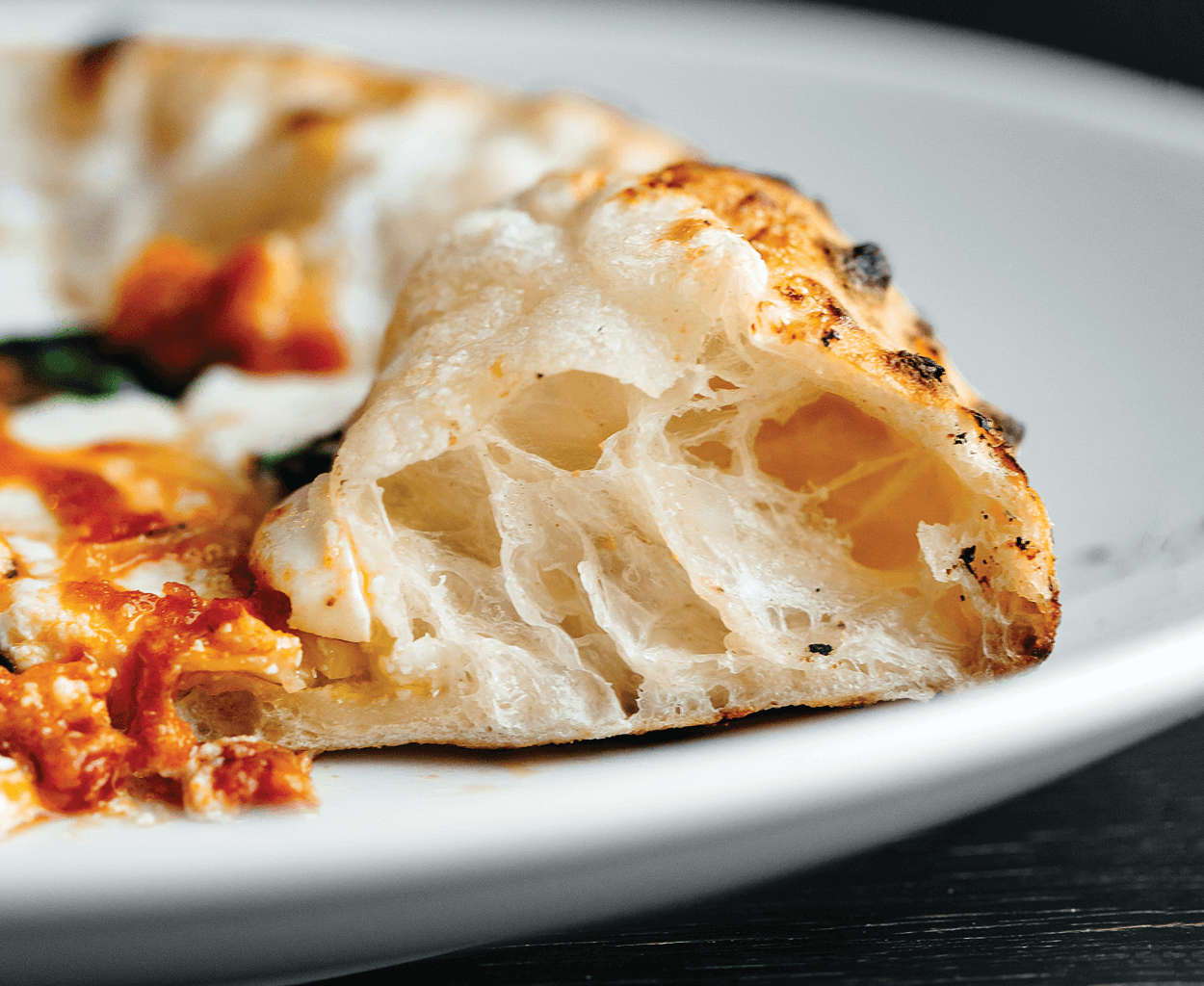 The charred bits along the edges — known as leoparding — are a sure sign that the pie has been fired right. photograph by Tim Robison

Among pizza aficionados, Neapolitan is the top of the mountain.

Sure, there are toppings on Neapolitan pizzas — from the fresh basil and buffalo mozzarella on a basic margherita to house-made sausage or wild mushrooms — but big piles of cheese aren’t really the idea. Where most serious pizzerias use canned San Marzano tomatoes for their sauce, Smith thinks those are too sweet. Instead, he mixes canned Stanislaus tomatoes from California and the Ciao brand from Italy to achieve the right balance between sweetness and acidity. The dough, aged 48 to 72 hours, is made from Italian flour. “No one in their right mind who’s not from here would open this kind of restaurant in Winston-Salem,” he says. “We’re putting it out there, and it’s real.”

That kind of attitude comes with pushback, of course. He’s had his share of negative write-ups on Yelp and the like, from people who think that pizza is just pizza (and ought to be cheaper than $12 to $16 for a single-serving pie). But he gets a lot of raves, too, particularly from people who believe that pizza definitely isn’t just pizza. “What is it about pizza that prevents people from thinking, ‘Why shouldn’t we make it better?’” he asks. “Better ingredients. Better technique. Why shouldn’t we demand more from our pizza? We’re demanding more from our coffee, our steak, our ice cream.” True. Serious times call for serious pizza, too.

Smith’s path to pizza obsession started by chance. In 1998, right after college, he and a buddy took a trip through France and Italy, mostly camping. (They were actually there to compete in a world cup of foosball, one of his other two obsessions, along with soccer.) On a whim, they decided to visit a friend in Greece. They stopped in Naples on the way and wandered into a real Neapolitan pizza place.

He doesn’t remember the name, or even exactly where it was. But he remembers the moment: “The memory of having this pizza — super hot, super fresh — that was unlike anything I had ever had. It was like, ‘What the hell is this?’” he says. “It’s easy to determine when you’ve had the best ‘best thing.’ It’s such a eureka moment.”

He went on to get a job working for a pharmaceutical company. But he knew he wasn’t happy. It was a job, not a passion. He knew he needed something to throw himself into, and it was either going to be soccer or pizza. And not many people get to have long careers in soccer. So pizza it was.

In 2007, he started thinking seriously about opening a restaurant. Then 2008 arrived, and the economy screeched to a halt. Business loans dried up. Smith left the pharmaceutical company and worked in restaurants, including a stint for Jim Noble at Noble’s Grille in Winston-Salem. He was working in food, and getting experience in the business side of things, but he longed to do more.

In 2010, he decided to take a chance. He found a guy in Colorado who was building trailers with wood-fired ovens on them. Instead of a restaurant, Smith started a pizza truck, Forno Motto, and catered private events and parties. He loved the food truck business, the personal contact with customers, and the constant challenge of adapting to various conditions. The truck also allowed him to build a following. After four years, with the economy taking off again, he raised $25,000 from a Kickstarter campaign to open a restaurant. He found a spot in Winston-Salem’s Arts District, wedged between breweries and art galleries, to finally launch the eatery he’d envisioned: concrete floors, an open kitchen, 60 seats.

Mission Pizza Napoletana opened in 2014, and has been garnering national attention. In October, Smith was one of 28 master pizzaiolos from around the country invited to the first New York Pizza Festival, a two-day event in the Bronx. He makes frequent trips to Naples to keep learning, including to a 10-day pizza festival that features Italy’s biggest pizzerias and draws a million people. “It’s like Oktoberfest for pizza,” he says. “It’s unreal.”

One idea he brought back from his most recent trip: a pizza version of the Roman pasta dish cacio e pepe. He places ice on the dough as it cooks, causing the Pecorino on top to emulsify into a creamy sauce, which he tops with freshly ground pepper as soon as the pizza comes out of the oven. 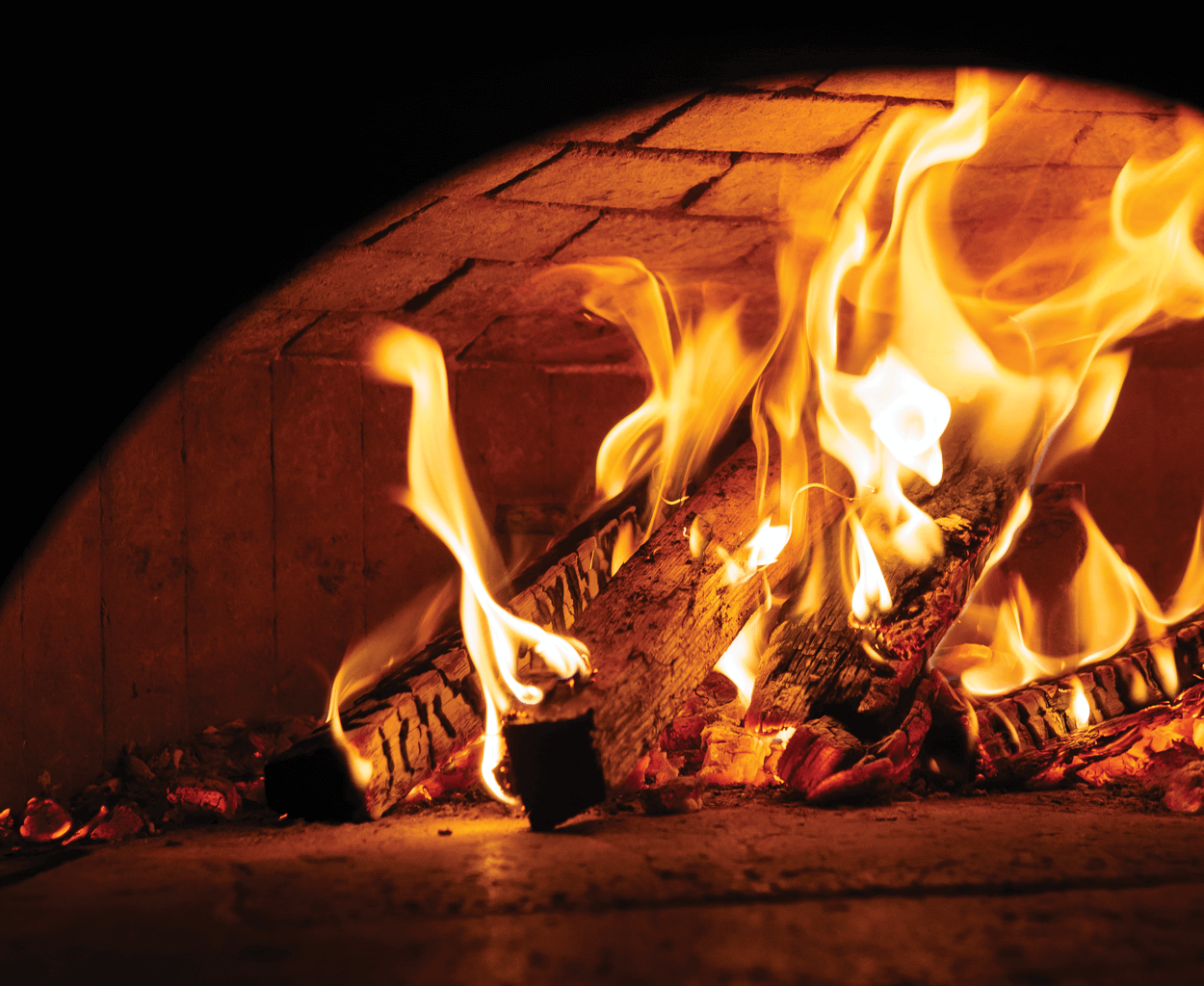 An 850-degree wood- burning oven is the restaurant’s mission control. Simple, fresh ingredients become pizza perfection after one to two minutes in the heat. photograph by Tim Robison

He’s even been approached about expanding, but he’s taking his time on that. Any future plans will have to align with his guiding philosophy: Don’t do something just to make more money. “The problem is, frankly, pizza is such a commodity in this part of the world. Pizza’s history is cheap, approachable food,” Smith says. And that’s too easy for him. He likes a challenge, a purpose. “The whole premise is to do my thing — the thing that excites me and my staff — and anticipate that enough people a week will get it.”