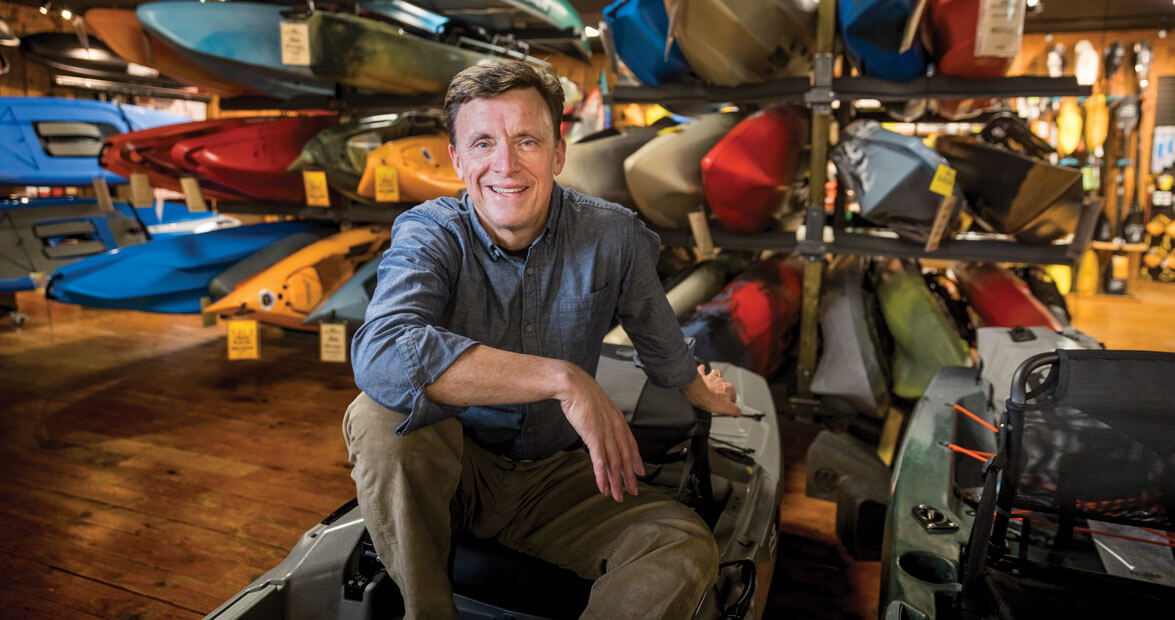 Chuck Millsaps was on top of Mount Mitchell, loosening his boots and savoring the bliss of a bracing winter hike, when his career at Great Outdoor Provision Co. began. Not many people venture out to such a place on such a day. So when a father and son appeared on the trail, Chuck struck up a conversation. Connections were made — “You’re from Charlotte, too!” — and phone numbers exchanged. Somehow, in the dead of winter, 6,684 feet above sea level, the seeds of a lasting friendship found fertile ground.

Two years passed. Then, out of the blue, that hiker dad, who’d just been hired as a manager at Great Outdoor Provision Co., tracked down Chuck and offered him a job. Thirty-three years later, Chuck recalls, “The only other time I’d seen him was on Mount Mitchell!” Sitting on a park bench outside the Raleigh store, sporting Olukai sandals on a crisp day, Chuck is now the company’s president — its “Minister of Culture,” to be exact. In 2013, he and some fellow employees bought the company, which now has nine locations.

Stories like Chuck’s aren’t uncommon at GOPC.  Outdoor adventure is company culture. The collective staff at the nine stores is like a wilderness expedition dream team, with experts in hiking, fishing, and paddling — just the kind of people you’d want with you on a frigid mountain trek or working a crowded sales floor two days before Christmas.

So passionate is GOPC about its staff and their ability to inspire and connect with customers that the company refuses to sell a single item online. “It is kind of odd, isn’t it?” Chuck laughs. “But really, we just want you to come in and see us.”

One of the first things That customers notice when they walk into GOPC are the creaky wooden floors. It’s a homey, tactile welcome, envisioned by company founder Tom Valone, who opened the first shop in 1972 in a tiny space at the back of a Carrboro bike shop, stocking it with gear he’d personally tried, or couldn’t wait to.

It’s common to see staff members chatting with customers about cold-weather gear for next weekend’s football game or taking them out to the parking lot to test a new fly rod. “It’s no beautiful mountain stream, but at least you can get an idea of what that rod’s going to cast like,” says Jim Coveney, manager of the Chapel Hill store’s fly-fishing department. On his cell phone, he has a photo of a bespectacled 9-year-old boy whom he recently taught to fly-fish. Before Jim’s recent vacation, the boy stopped by the store to give him a fly he’d tied just for him. “It was supposed to be a woolly bugger,” Jim laughs. “But it became more like a deceiver. It was a really cool-looking, very colorful fly.”

In the winter, the stores also host clinics on cold-weather paddling and wilderness first aid. Another course teaches beginner backpacking skills and ends with a group hike in the spring. Throughout the year, the company sponsors events, partners on educational seminars, and reaches out to customers about issues surrounding conservation and public lands. “We try to think of ourselves almost like a public library in the sense that we’re a resource and we’re available,” Chuck says. “It’s not a requirement that you have some kind of card or that you even buy something from us.” But, as in a library, a little browsing always leads to bringing something new home.