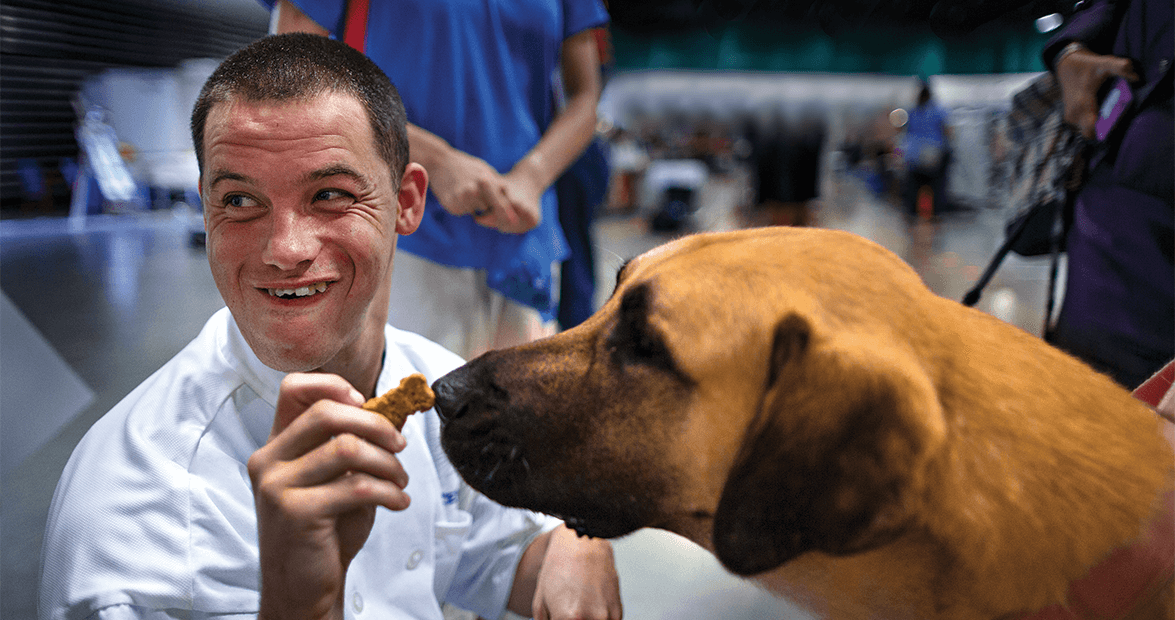 It’s a dog biscuit, a great stocking stuffer this time of year. But really, it’s more than that.

Sure, the biscuit’s made in a small shopping center minutes from the University of North Carolina at Greensboro, inside a white-walled bakery that once made gluten-free bread. And sure, the biscuit’s got all-natural ingredients, like freshly ground peanuts, oatmeal, vegetable oil, water, and, when it’s available, flour from a nearby 18th-century mill still in operation.

But it’s the people there who make this place different. They call themselves chefs, and their business is known simply as arcBARKS. The message on the door is meant to make anyone laugh: “arcBARKS are barkin’ good. Don’t believe us? A dog’s tail doesn’t lie.”

But the message at eye level gives more of an inkling of what’s inside: “Special Dog Treats made by Special Hands.”

She holds up a tray of dog treats like an athlete holding up a trophy. She smiles so widely that her teeth look like Chiclets. Fellow chefs gather around, look at her design on the tray, and exclaim, “Way to go, Addie Cat!’’

They have fun, these 18 chefs. And they look sharp.

They come to their job training in uniforms that they lay out the night before. Zeb Vance wears a white chef’s coat. The rest wear khakis and blue collared shirts. David Clapp even slips on a dark blue sweater vest in the heat of the summer.

He wants to look handsome, because Jordan Kraus is his girlfriend. And at their job-training program, they dance. But Jordan dances with everyone, because Cameron Kidd — DJ Crazy Cam to everyone in the bakery — plays Christmas music and everything else from his iPad propped in the corner.

This DJ blasts everything from Rod Stewart to  Village People.

Like Addie, Jordan smiles. When she does, her glasses ride up her nose. She giggles a lot. She plays a lot. When she mixes the flour for the treats, she flicks it into the air and watches it fall around her like the remnants of a fireworks show.

Now Michael Rolando, he’s no nonsense when it comes to making dog biscuits. But when he takes a break, he turns a table into a prop and does push-ups with one arm. Or he simply stands by a shelf and dances.

Whatever he does, it makes him happy, and he sounds off about it.

But that’s what Michael does, makes sounds. As for Jordan, she doesn’t talk. Then there’s Danny Wert, who often sits beside Michael. Though what Danny says is sometimes difficult to understand, he has no trouble understanding others.

But David and Cameron have lots to say. David talks about the weather, Cameron talks about music, and Addie talks in few words. When she does have something to say, she uses her smile as an exclamation point.

As for Zeb, he talks about everything. He’ll pitch his chin toward the ceiling and look down his nose as he walks around the bakery on the balls of his feet. He talks about his love for baseball; about Angus, his Great Dane; and about his training as a chef. He loves being a chef. So does everyone else.

These chefs can make 2,500 boxes of peanut butter dog snacks a month. They call them Peanut Butter Barkers, and they sell the boxes at nearly 150 places across North and South Carolina, from supermarkets to an animal hospital in Durham.

They sell them in beige boxes no bigger than a package of Cracker Jack. The illustration on the box sets it apart on the shelves: three bakers in Carolina blue chef hats, with David on the left, Michael on the right, and Addie in the middle.

On the box, Addie has that open-mouth grin everyone recognizes, and every time she sees her face on any supermarket shelf, she squeals.

So far, three supermarket chains — The Fresh Market, Whole Foods, and Lowes Foods — have put Peanut Butter Barkers on their shelves, and that’s big news for any start-up. But this start-up, which began three years ago, is different than almost anything anyone has seen in North Carolina.

It’s really a program geared to help adults saddled with labels that turn their parents into fierce advocates for their children. Otherwise, they’d wring their hands with worry.

These are adults with special needs and developmental disabilities. For years, their job prospects were bleak and their life seemed to go no further than a darkened room at home. Any kind of social interaction beyond their family was only occasional. Days were spent watching television.

But then came this bakery. 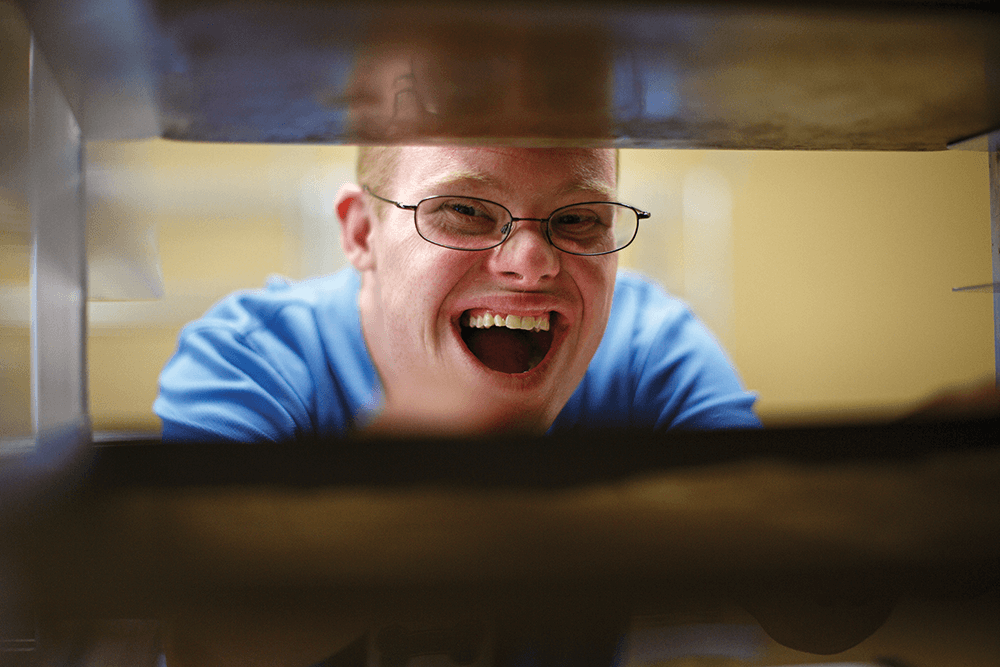 The business began in 2011 for chefs like Addie and Cameron, Michael and Danny, David, Jordan, and Zeb. Their parents pay no more than $24 a day, or pay month to month, and whatever revenue the program brings in is funneled back into production.

The program is close to breaking even, but parents don’t think about the profits. They think about their kids, because they see dramatic changes. Because of arcBARKS, they say their children are transformed.

The Arc of Greensboro, a nonprofit, runs the program, which has helped these special needs adults feel wanted, a basic human instinct, and something some of these people haven’t felt since high school.

Pat Clapp, David’s mom, helped start arcBARKS. She got the idea after finding out about a chicken pie bakery in Massachusetts. Then she heard about a dog treat bakery in Chicago. When she got more information about those operations, she cried. She knew. This could happen here in North Carolina, right in Greensboro, where she lived.

Clapp is 85. Her son will turn 60 next year. He’s the middle child of three, born with the genetic disorder known as Down syndrome, and his mother still has the typed letter she received from a health magazine in October 1955 about the future of her son.

Two paragraphs and five sentences predicted that her son would spend his life in an institution, with no chance for anything.

“My darling little boy,’’ she told herself. “You don’t know what will happen with my child. I’ll live in a hut if I can change things.’’

She approached the Arc of Greensboro, and everyone involved saw making dog treats as a way to give adults with special needs a chance to do something after high school rather than having their families find nothing except frustration.

But really, Clapp knew it was working when David came home one day and said, “Mom, they respect me there.’’

From the Clapps’ kitchen, arcBARKS went to a church’s kitchen, to a former church’s kitchen, and finally to the spot off Spring Garden Street in Greensboro where Jordan flicks flour into the air and Addie exclaims several times a week, “Hey, look at my treats!’’

“You walk in and see the glowing faces, and you know they feel important,’’ Clapp says. “That’s everything. It’s a part of who they are.”

Here’s who they are. Jordan is 28, Michael and Zeb are 27, Danny and Addie Cat are 25, and DJ Crazy Cam is 24. Their parents have nightmarish stories of going numb a few hours or a few years after their child’s birth, hearing about complications that cloud their child’s future and crushes any dreams the parents nourish.

“It’s a very hard transition,’’ says Kathy Kraus, Jordan’s mom, a mother of three and a pediatric nurse by training. “I’ve heard people say, ‘You have to grieve the child you expected to bear.’ See, everyone expects to have the same baby that you had before, and you have to adjust to a different reality.’’

So parents push. They search for options, and options are often few. When they find them, they feel relieved. Their child grows. But after high school, when they can graduate at age 22, the options fall off. Parents describe the resulting feeling as “walking into a black hole.’’

That black hole is filled by arcBARKS, and Sarah Ray and Brooke Ward, along with a fleet of volunteers, make it all run.

Ward started working with kids with special needs when she was 9. She’s now 24, a UNCG grad from Pleasant Garden. She works as arcBARKS’ assistant director. And that means she does a great deal, including dancing with Jordan.

Ray dances with Jordan, too. And she high-fives Danny and teaches Cameron how to do accounting as she gives life skills to everyone else in the most serendipitous of moments. That includes dealing with two teenage boys who said something nasty walking by.

“Don’t go in there,’’ one of them was overheard saying. “That’s the retard store.’’

Ray, the program’s director, clipped a note underneath the windshield of their car. “Thanks a ton for not using the R-word in the future,’’ she wrote. “Even when you think no one is listening, someone always is.’’ Then she placed a free box of Peanut Butter Barkers on their car.

Ray got involved with arcBARKS by escaping New York City. She came to Greensboro for a boyfriend in August 2009 and taught power lifting to adults with special needs at a local recreation center in Greensboro. Her team was going to compete in the Special Olympics.

She started the job two months after she moved to Greensboro because she felt she needed something to warm up her heart. Her heart wasn’t getting warm with her new corporate job as a marketing assistant with a property management company.

But Ray lost the power lifting job. So she started working as a rehabilitation technician, making $9 an hour. But she lost her clients when she drove back to Michigan to help her father, a used car salesman, deal with complications caused by his diabetes.

That’s when she got a call from Buzz Vanderwerff. Ray had worked with Vanderwerff’s son, John, on the Special Olympics power lifting team, and Vanderwerff had seen how Ray had an innate gift for helping the team members become more confident individuals.

“Sarah, there’s this dog treat company thing that the Arc is trying to start, and we need the right person, and I’ve seen what you can do,’’ Vanderwerff told her. “I’ve set up an interview.’’

The call came in October 2011. First, Ray started as an adviser. Nearly two years later, as that job — and the program — grew, she became the director of arcBARKS. 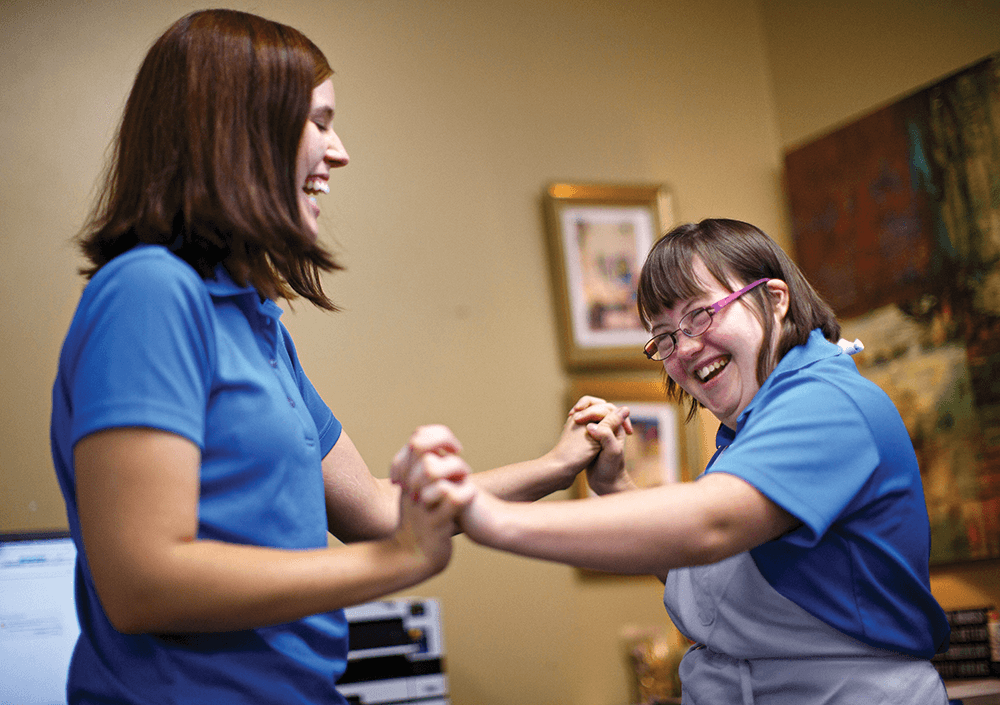 Chef Jordan Kraus comes to Brooke Ward, assistant director, in her office for a dance break. photograph by Jerry Wolford

Since then, she’s helped the chefs. She’s laughed with them, comforted them, and become their teacher. She’s helped them do everything from learning how to answer the phone and work the cash register, to simple accounting.

The chefs, Ray says, have also helped her.

“I’ve had to sit across the table from parents who’ve heard their children get called the R-word, and I’ve seen their kids think they’re not important and say, ‘Why am I different?’” she says. “Some families never tell them they have special needs. I mean, I get so emotional about this because when I work with them, I feel that I’m in a room full of sacred monks.’’

Ray tears up. Then, she continues.

In that small bakery with white walls, Ray has learned the basic needs of human nature: people need to be needed, meaningful work isn’t found, but formed, and dreams come from the inside.

That’s a lot of beliefs, all baked in a simple biscuit.