The rain turns to sleet — it goes from a patter to a ping on the gutters outside — and I sink deeper into the sofa. For once, I heed the television meteorologists: I’m going nowhere. I put on a pot of coffee and tick through the possibilities. More email. Clean the basement. Do something about that sticky closet door. Nope, nope, and nope.

It’s days like this that set my mind to wondering — or wandering — about a peculiar passion: What was it like in North Carolina before there were sticky closet doors and metal gutters and auto-drip java? The deep-winter months seem tailor-made for this sort of pondering. What was it like when the Tuscarora roamed this land? When the Saponi of the Yadkin Valley hunted elk in the lowlands? Before European sails crested the horizon, before settlement, before the state was plotted and platted and plowed? What was North Carolina like before?

There’s nothing like sleet on a metal gutter to send me down this rabbit hole. 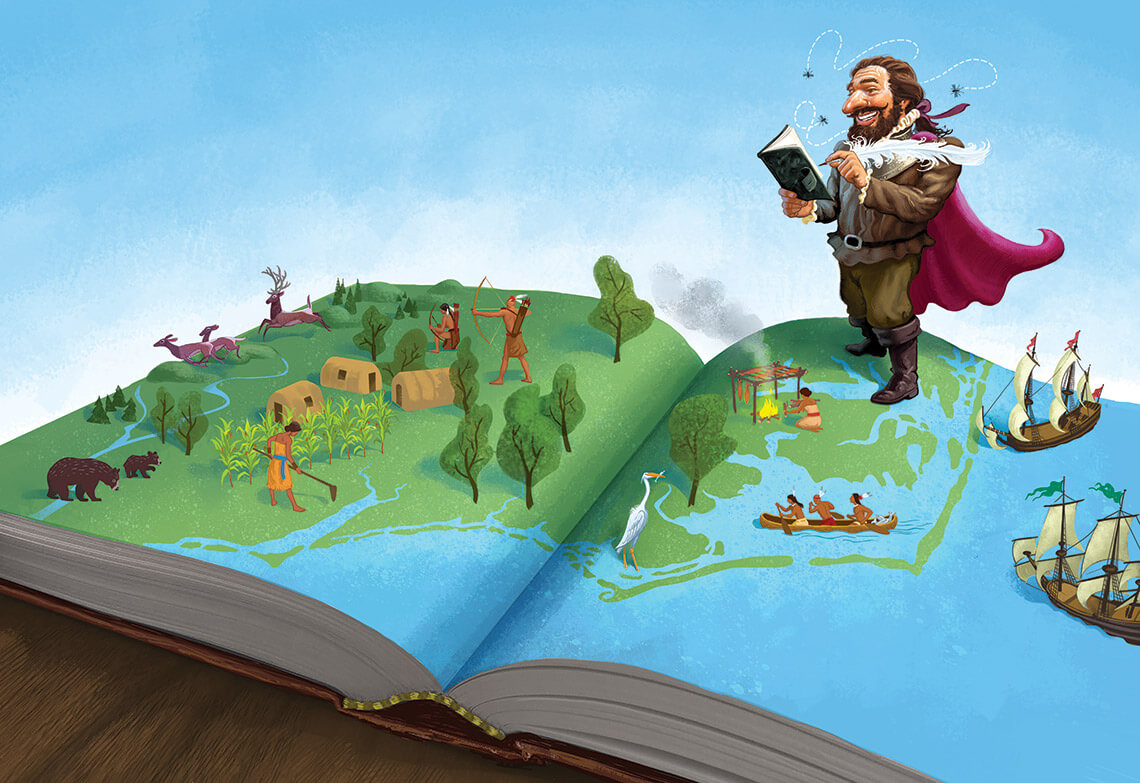 On rainy afternoons, the author explores the state vicariously: Books about early North Carolina history let his mind wander back to a time before European settlement. illustration by James Bernardin

On a bookcase in my office is a country mile dedicated to the earliest written notions of what would become North Carolina and the Southeastern colonies. There’s The Juan Pardo Expeditions: Exploration of the Carolinas and Tennessee, 1566- 1568. Nearby is Byrd’s Line, a fascinating analysis of the surveyor William Byrd II’s 1728 journey along the North Carolina-Virginia border. It’s more riveting than any Marvel blockbuster, I promise.

Keep on moving, to the right:

1491: New Revelations of the Americas Before Columbus.

Westward from Virginia: The Exploration of the Virginia-Carolina Frontier, 1650-1710.

There are the works of William Bartram, Alexander Wilson, and Mark Catesby, the so-called “Colonial Audubon.” And, of course, there’s my favorite: the tattered and marked-up copy of A New Voyage to Carolina, the 1709 blockbuster of North Carolina exploration by John Lawson. (So enamored am I of Lawson that I was determined to name my son Lawson Nickens, until Julie vetoed it. “Those double Ns just don’t work for me,” she sniffed. This seems tangential, but it’s the first time in 21 years that I’ve had the opportunity to complain about it in print, so please bear with me.)

It’s a messy business, mustering to imagination what the recently retired Appalachian State University environmental historian Timothy Silver calls “the elusive entity” of a past landscape. (Why Silver’s A New Face on the Countryside: Indians, Colonists, and Slaves in South Atlantic Forests, 1500-1800 hasn’t hit Hollywood is beyond me. Read it now!) Through time, North Carolina’s landscape has been no more static than a heartbeat, changing with the centuries, the decades, the years, the months, the moments. To choose the arrival of Europeans as some sort of starting point is to disregard the millions of people who already inhabited the New World. Truth be told, there really was no before. There was only a continent that had long been under the tenure of one race of man, and was about to be invaded by another.

In fact, much of the literature concerning North Carolina in the 17th and 18th centuries is colored with overstatements of the positive attributes of the region. Writers often had a vested interest in reporting to their patrons that their New World acreage was a wonderland. Some early reports were little more than “glorified advertising,” according to the late historian Hugh Talmage Lefler, and hardly the sort of document that would hold up under scrutiny. “The goodliest soile under the cope of heaven,” Ralph Lane called the environs of Sir Walter Raleigh’s first toehold on Roanoke Island, spawning a cloying phrase that would inspire real-estate brochure writers for the next few centuries.

In 1649, The Moderate Intelligencer, a weekly newssheet published in London, printed a two-page letter describing “Carolana,” the region south of the James River, in glowing terms: “Now you see you are plentifully fed and cloathed with the naturall Commodities of the Country, which fall into your hands without labour or toyle, for in the obtaining of them you have a delightful recreation.” Lefler reports of a book published in 1650 that has Virginia as its primary topic but effuses about the “South parts” of that colony as “a long neglected Virgin.” But few could outdo the writer of a pamphlet published in London in 1666 to help the Lords Proprietors find willing settlers for the lower part of North Carolina. The region was described as “seated in the most temperate Clime, where the neighbour-hood of the glorious Light of Heaven brings many advantages.”

Of course, they left out the mosquitoes, no-see-ums, and 90 percent humidity.

I lose track of time, literally and figuratively, scrolling through the volumes, until I suddenly cock my head. Sounds like the sleet has stopped. I reckon I could do something productive. The sticky door beckons.