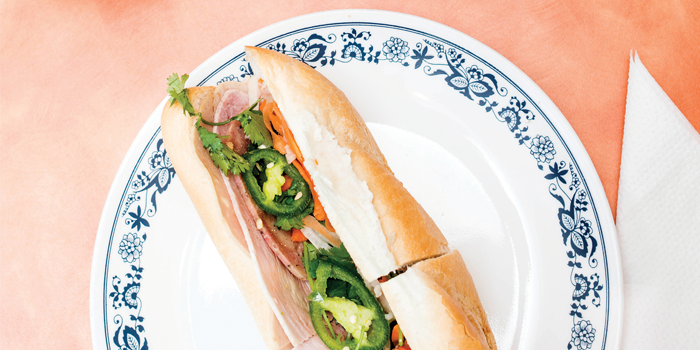 North Carolina’s status as a cultural and culinary crossroads has inspired food tours, like Greensboro’s Ethnosh, cofounded in 2013 by  Donovan McKnight, a former program officer with the North Carolina Humanities Council. Ethnosh has given McKnight the opportunity to introduce Greensboro residents to the international corridors in their own city, through visits to restaurants like Bánh Mì Saigon Sandwiches & Bakery. There, owners Kim and The Le serve chicken, pork, or tofu with cilantro and jalapeños on freshly baked baguettes. Bánh mì is a dish where various cultural influences are visible: Vietnamese ingredients like cilantro and pickled carrots are served on top of pork liver pâté inside baguettes, evidence of the area’s history of French colonialism.

McKnight knows the importance of sharing the stories behind dishes. “It’s more than the food,” he says. “It’s about the people.”

Still, the meals matter. In “New South” cities like Greensboro, where traditional industries like furniture and textiles have moved on, food “has become an opportunistic situation for people who are immigrants and trying their hands at different ventures,” McKnight says. “It gives our community things to eat and enjoy, but it also gives people from the outside a foothold so that they’re participating economically and socially.”

With that in mind, Ethnosh events are casual and social — people meet up at places like Bánh Mì Saigon and pay $5 to get a sampling of the restaurant’s offerings, and to meet the owners.

In the end, the power of the sandwich is something we knew all along: Food makes a place for people. Food brings us together in a way that nothing else can. And if we’re open to it, food lets us travel widely, even if we don’t have the means to venture far, in the name of discovery and exploration. Even the humble sandwich. Even, simply, filling and bread.