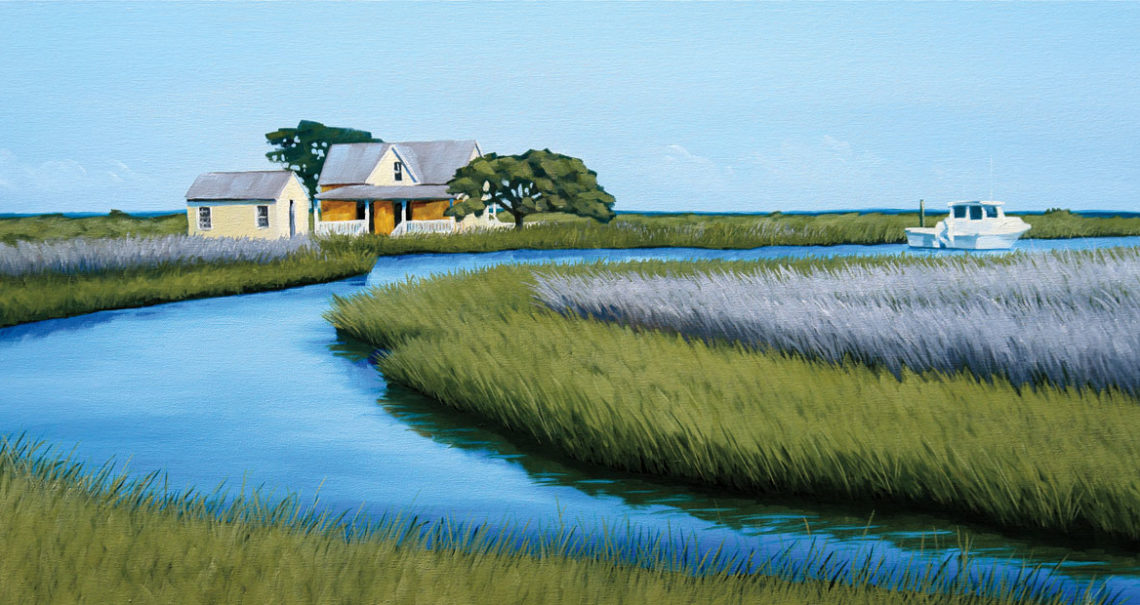 Away from It All on Ocracoke

DOUGLAS HOOVER // In the early ’90s, when Hoover first visited Ocracoke, most of the rental cottages didn’t have phones — if you needed to contact the outside world, well, there was a pay phone at the ferry dock. “It was this magical experience,” he says. “I’ve been hooked ever since.” He’s visited the island every year, in nearly every season, filling his camera and sketchbook with scenes to take home to his studio in Archdale. Long walks around the village help him capture the easygoing rhythms of island life, from Morning Meeting, featuring a group of old-timers catching up on the porch of the Community Store, to Mail Call (above), which shows the historic home of mailman Henry Pigott, one of the last residents of the now-uninhabited Portsmouth Island. douglashooverstudios.com 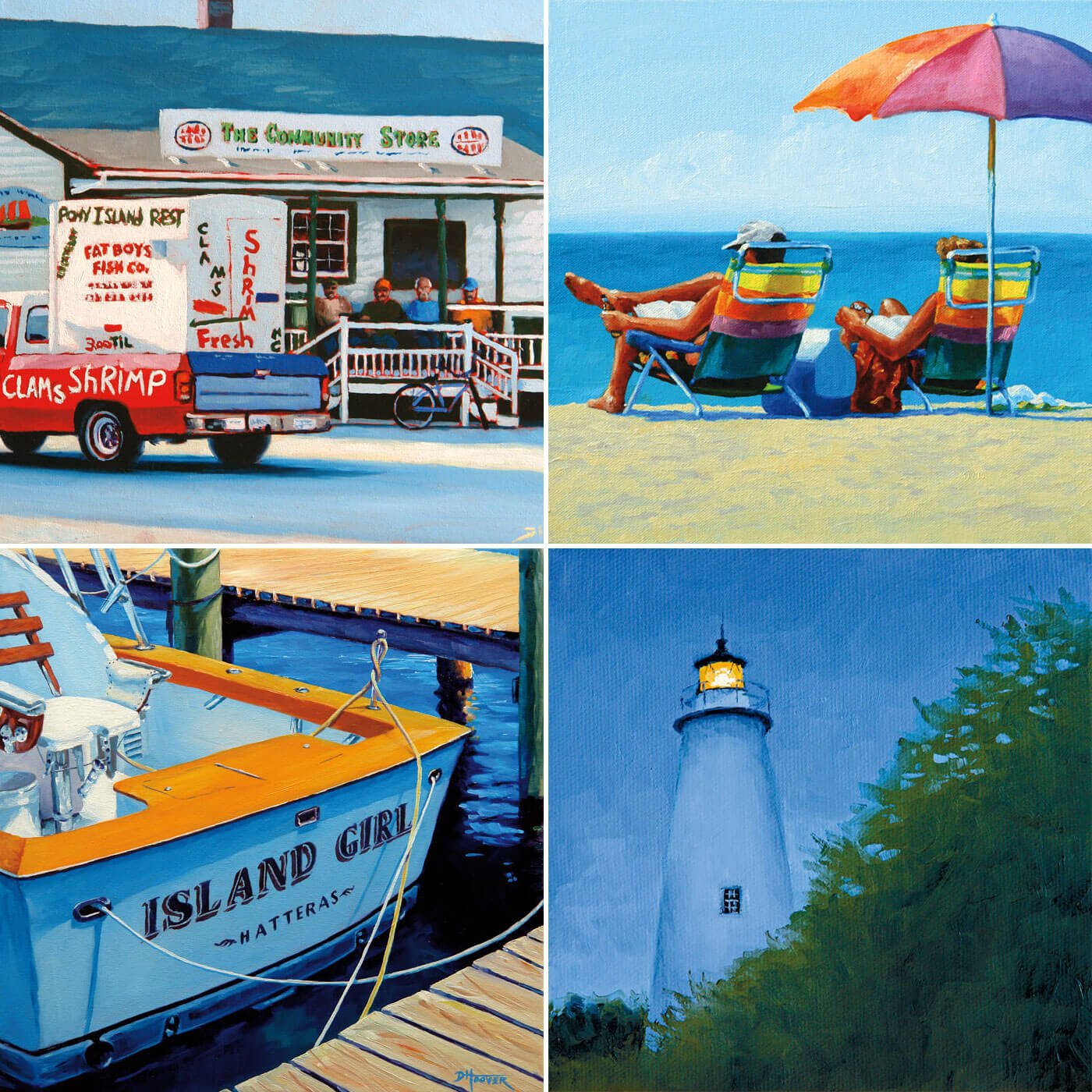 Portrait of a City

TOMMY MIDYETTE // The view from this overpass on Western Boulevard is one of the best in Raleigh, Midyette says. And he would know: He’s lived in the capital city since 1967. As an artist, Midyette is fascinated by faces, but the early 2000s saw a lull in the portrait-painting business. So he turned his attention to the city where he grew up. Midyette painted Raleigh Downtown Realistic in 2005 and updated it about seven years later, and the skyline continues to evolve: “Raleigh won’t look the same next month, these buildings are popping up so fast,” Midyette says. He loves the energy of his hometown, the arts and sports and people-watching. “Raleigh’s a great place,” he says. “Every time I think I want to leave, I realize it’s really the best.” tommysartworks.com 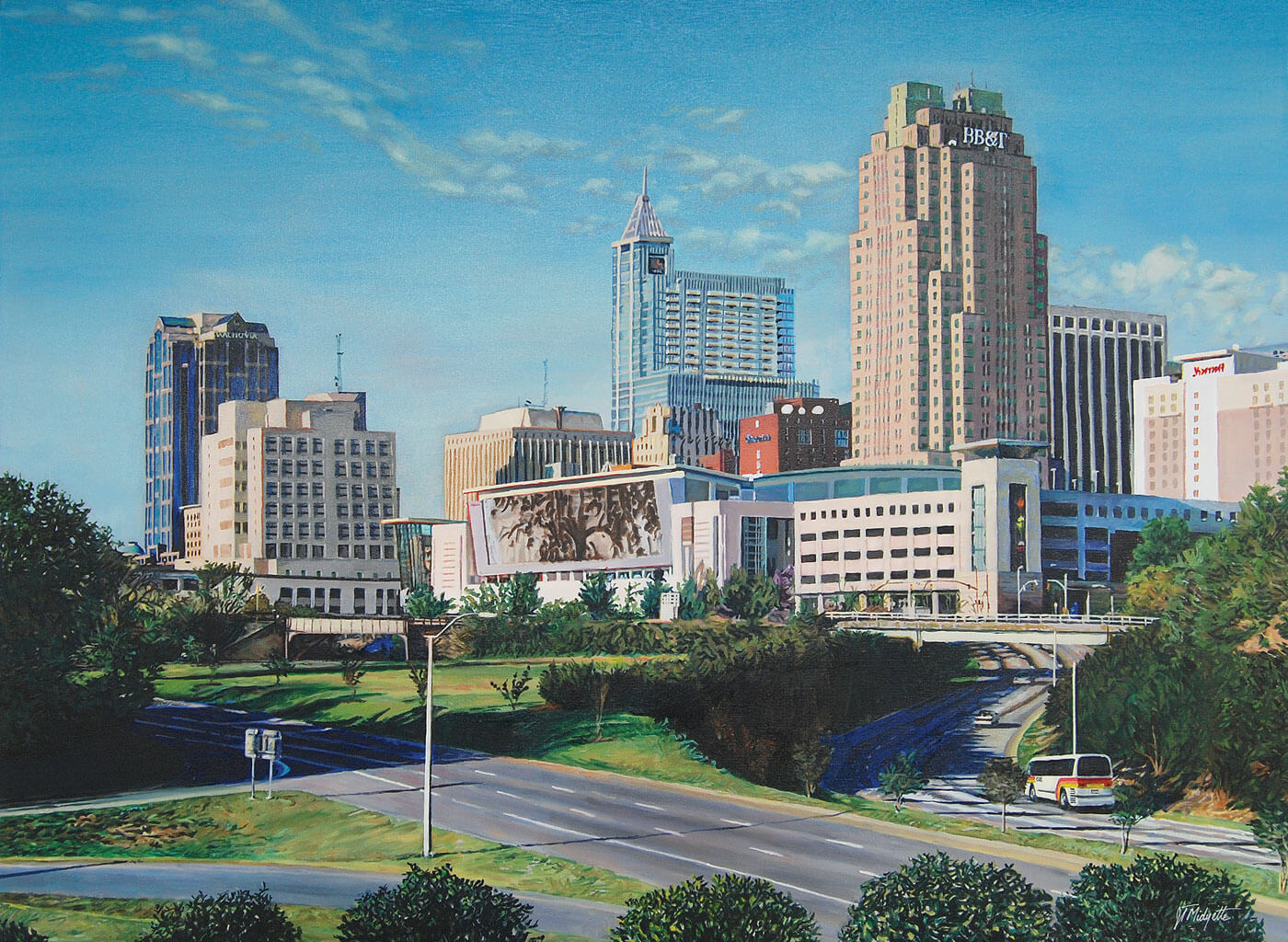 Raleigh’s skyline is ever-changing, so Midyette often circles back to his painting Raleigh Downtown Realistic.

BRENDA BEHR // In the fall, when Wayne County cotton farmers strip the leaves from their plants to prepare for the harvest, the crimson of the defoliated plants and the light blue of the sky reflect onto the white bolls, creating “the most beautiful lavender cast,” Behr says. And when the breeze picks up in Wilson County, Vollis Simpson’s famous whirligigs don’t just spin — they hum. These are some of the secrets of eastern North Carolina that Behr learned when, after 30 years in the advertising world in Minneapolis, she returned to Goldsboro in 2003 to care for her aging mother. Together, they explored the quiet rural landscape; while Behr painted en plein air, her mother sat in the front seat of the car and reminisced. brendabehr.com 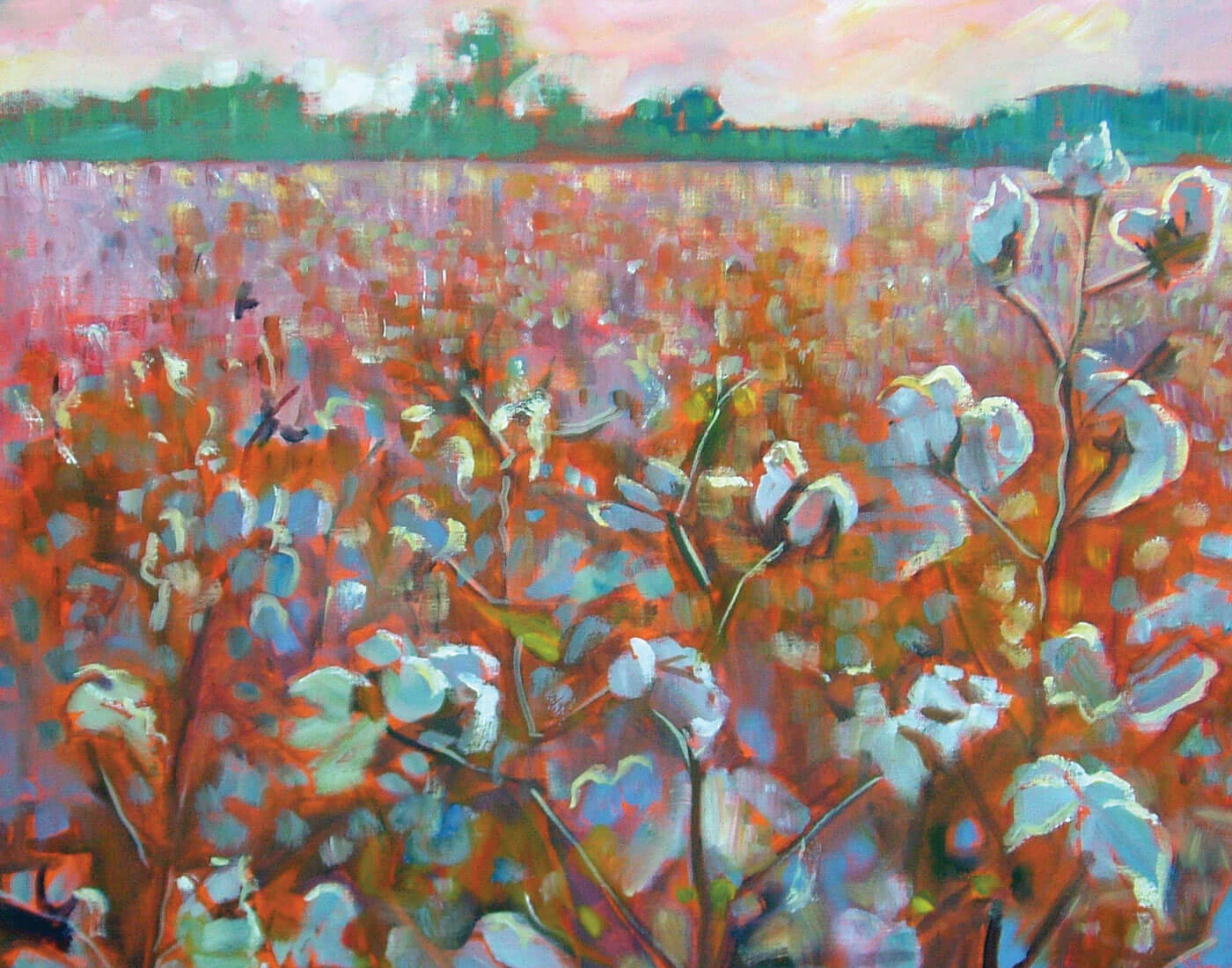 JEREMY SAMS // One winter day in 2011, Sams went out to the creek behind his house in Archdale and began to paint, inspired by a gallery full of plein air paintings so lifelike that “it looked like they were breathing,” he says. Six hours passed — and he was hooked. He learned everything he could about painting outdoors; now, he loads his backpack with supplies and hikes until he finds the perfect spot. On location, he says, he can see all the nuances of his favorite subjects: mountains and water, sunrises and sunsets. 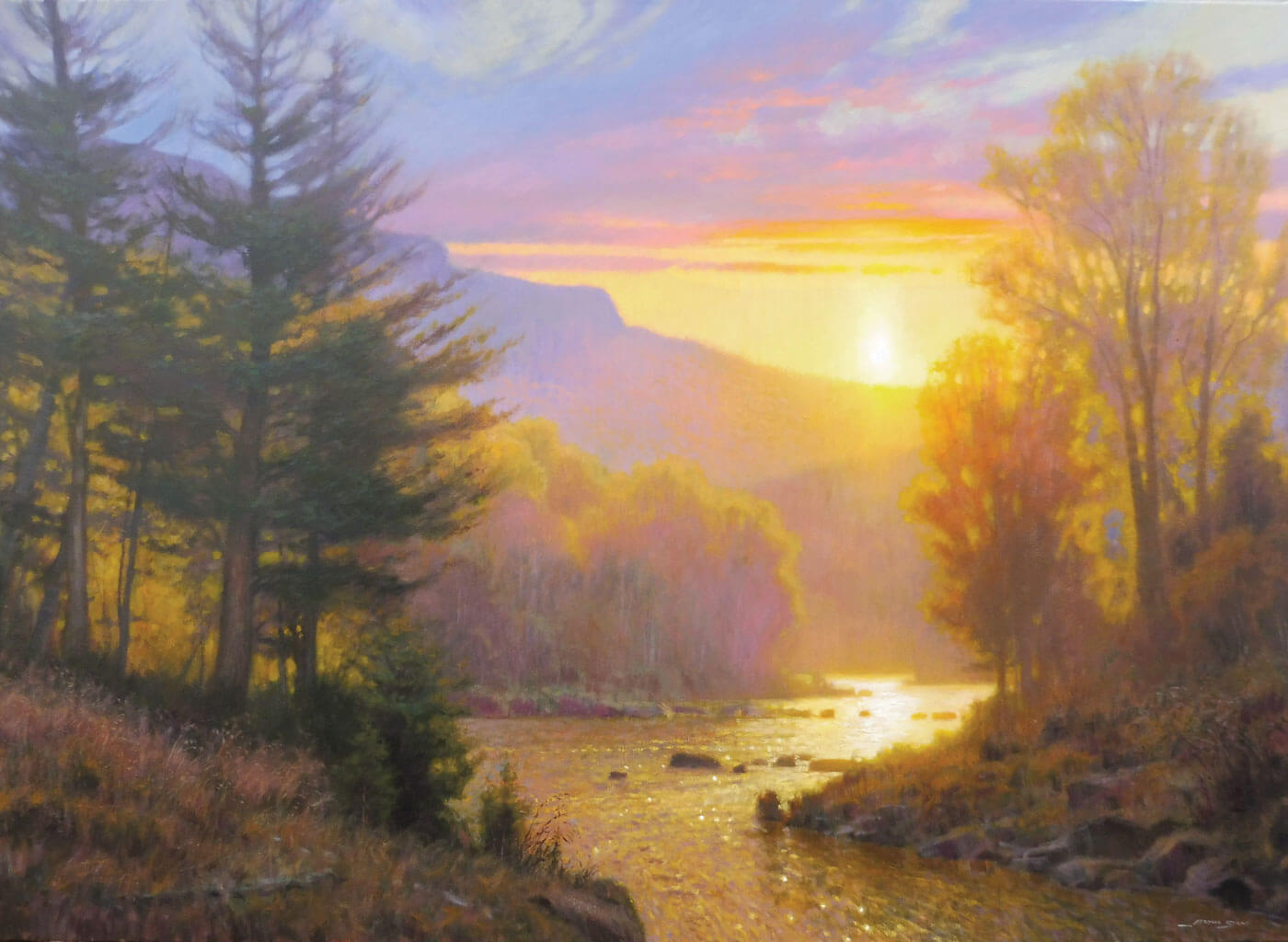 Grandfather’s Sunset portrays the beauty of the Watauga River.

In Grandfather’s Sunset (above), evening falls on the Watauga River; in Carolina Sunrise, day breaks on Carolina Beach. Sams grew up playing outdoors in North Carolina, canoeing and tubing on the Uwharrie River. Years later, that familiar scenery helps him bring his work to life. jeremysams.com 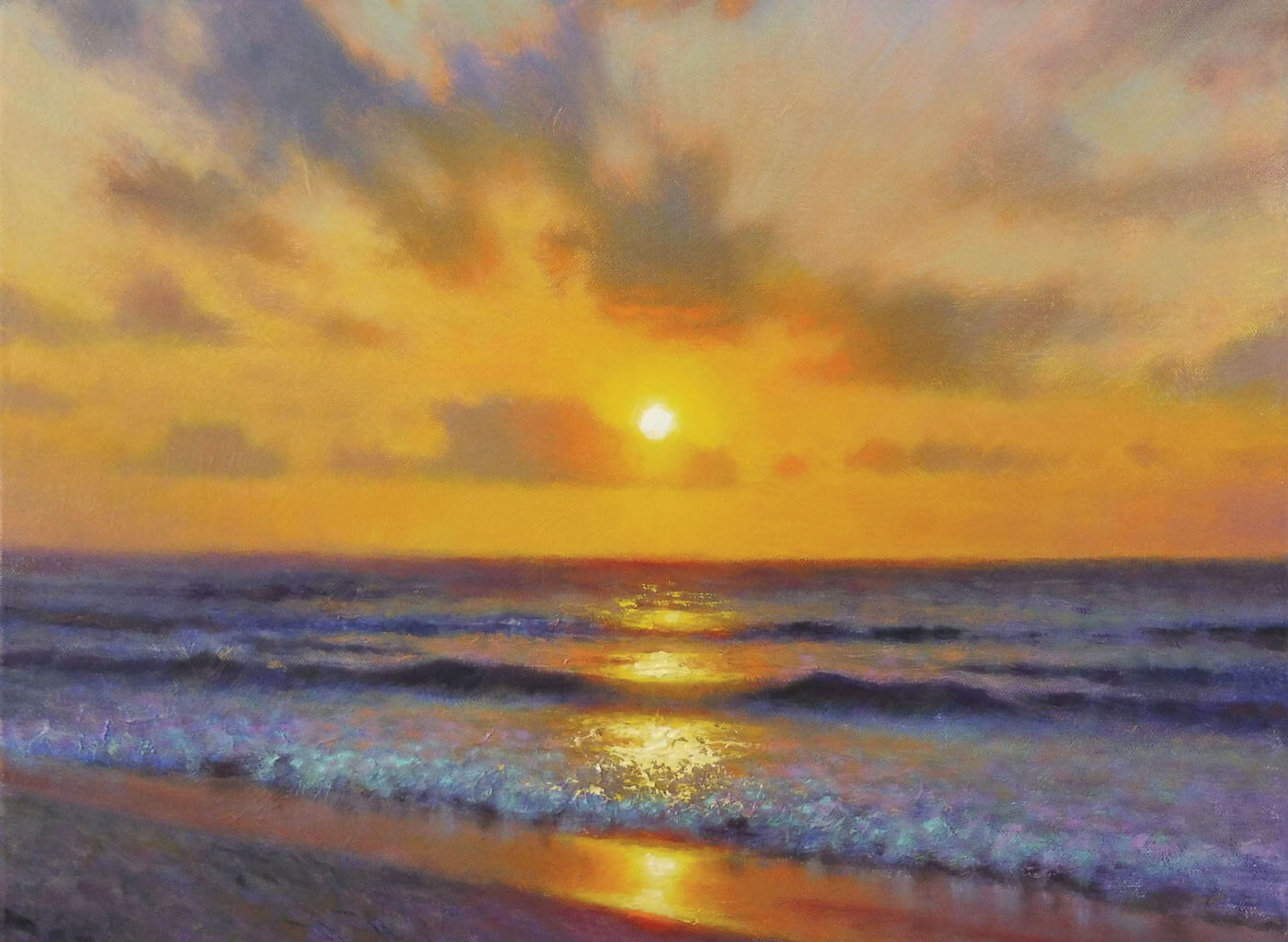 ANN VASILIK // For a well-traveled artist with a weakness for European street scenes, the Old World elegance of Asheville is a dream. Since moving to “the Paris of the South” in 1988, Vasilik has found inspiration in landmarks like the Biltmore Conservatory and snow falling on the dome of First Baptist Church. For Moonlight Over Asheville, she hauled her easel downtown to Pack Square and painted under a streetlamp. “Down there in that artificial light, the Vance Memorial was wonderfully pink,” she says. “I feel very fondly about paintings that I do en plein air because they take on a greater spontaneity — a greater spirit.” annart.vasilik.com 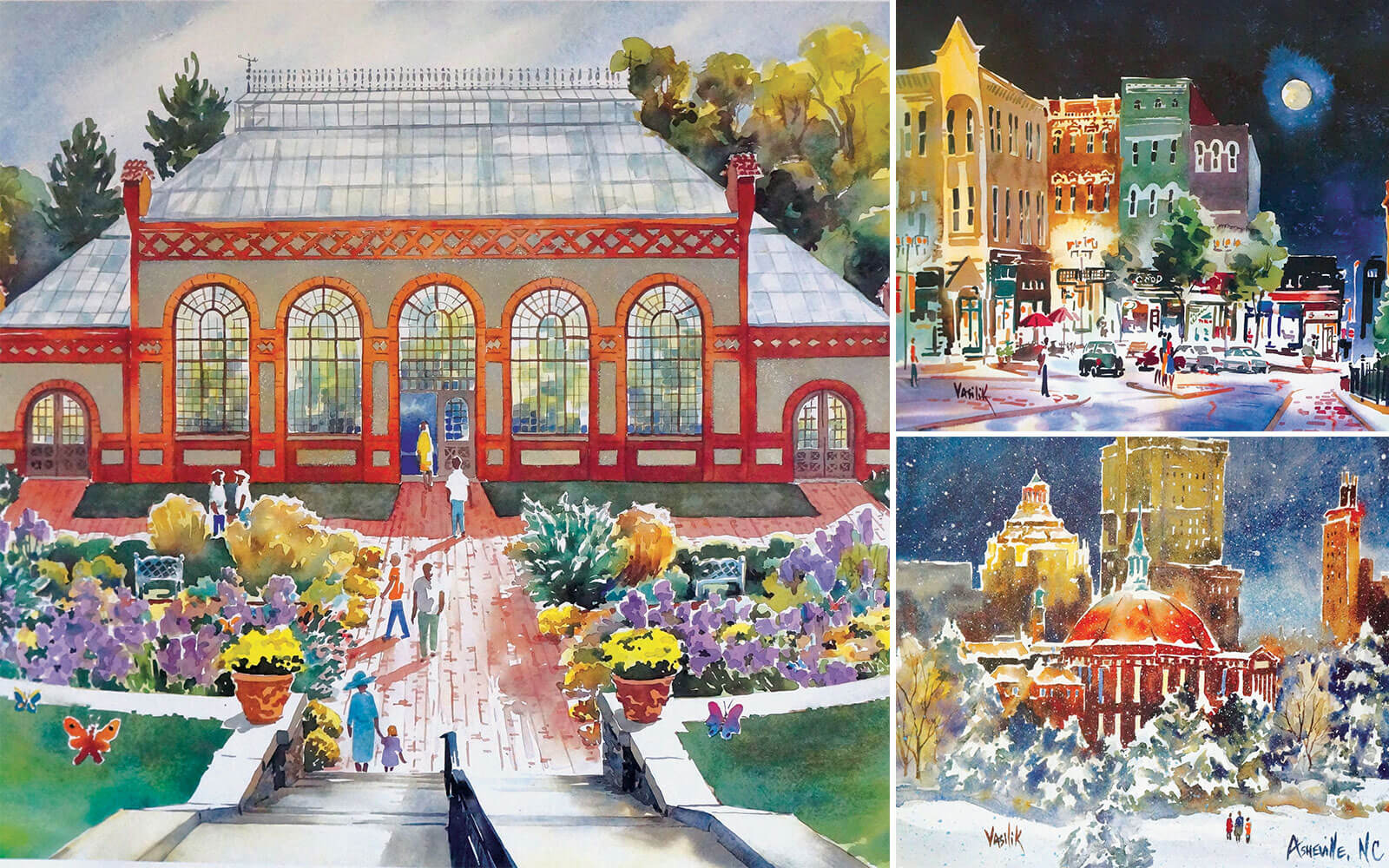 LAURA POSS // Before she discovered watercolors, Poss was drawn to water: lakes, rivers, and the Atlantic during regular family trips to the coast. Later, while living in Oriental, she found a community of watercolorists and thought, I have to try that. She particularly loved the luminosity of watercolors, the way light penetrates pigment and reflects off the white of the paper. She’s painted the lighthouses at Hatteras, Oak Island, Cape Lookout, Bodie Island, and Currituck. “Our lighthouses are a beacon of grace and North Carolina identity as much as a beacon for safety,” she says. Under her brush, they glow. lauraposs.com 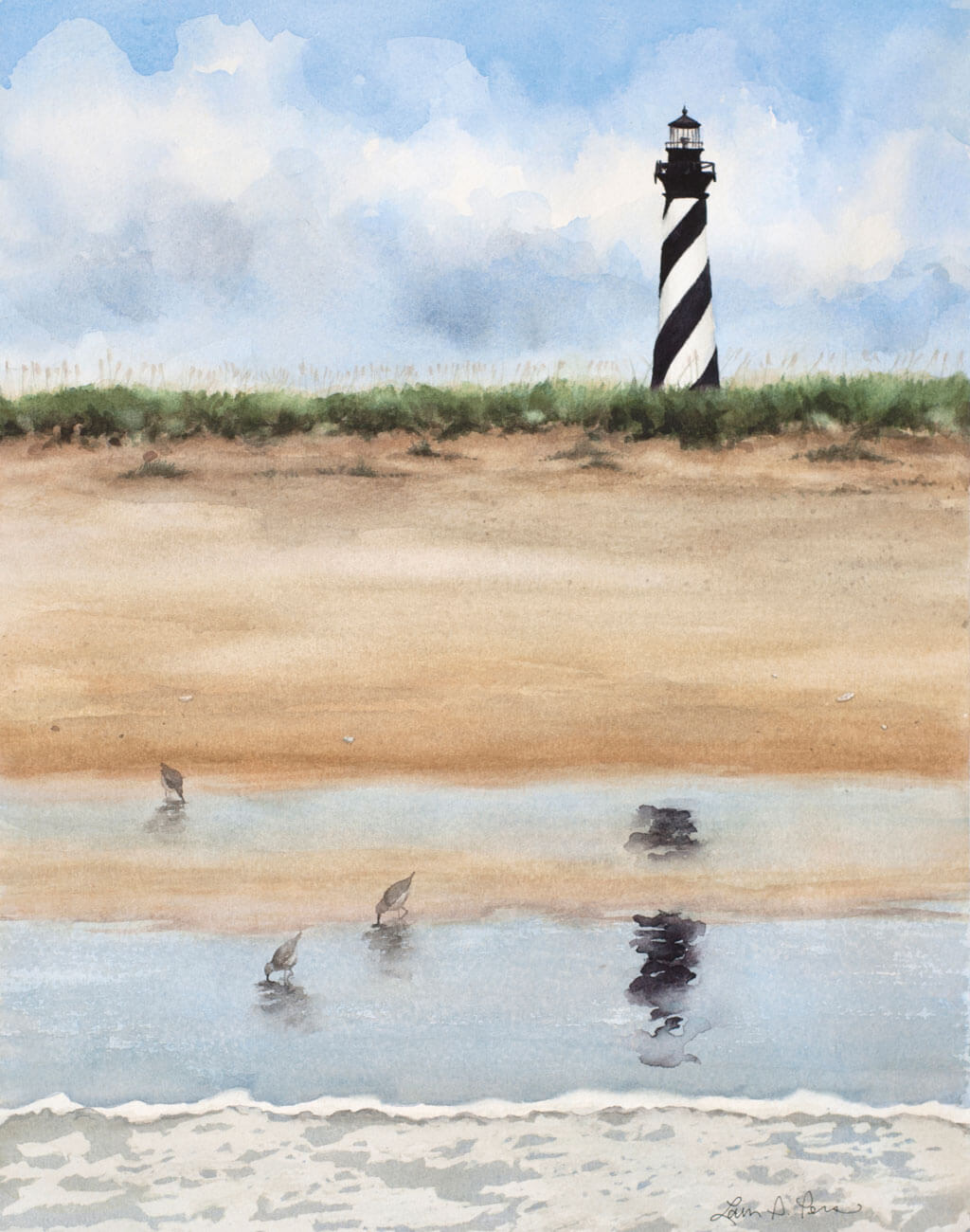 A Tale of Two Campuses

RYAN FOX // As a professional photographer turned watercolorist, Fox appreciates that a painting, unlike a snapshot, allows him to modify details of a scene to more closely match the image that’s in his head. A limited palette — just four colors — helped him change daytime to dusk for Tobacco Campus Skyline, while the many intricate details of the American Tobacco Campus show the energy and layered history of downtown Durham. Meanwhile, in Time for Rest, water blossoms stand in for ornamentation on Duke Chapel’s facade. Instead of trying to capture every detail of the grand edifice, Fox says, he just hoped to record the moment in all its tranquil beauty. rfoxphoto.com 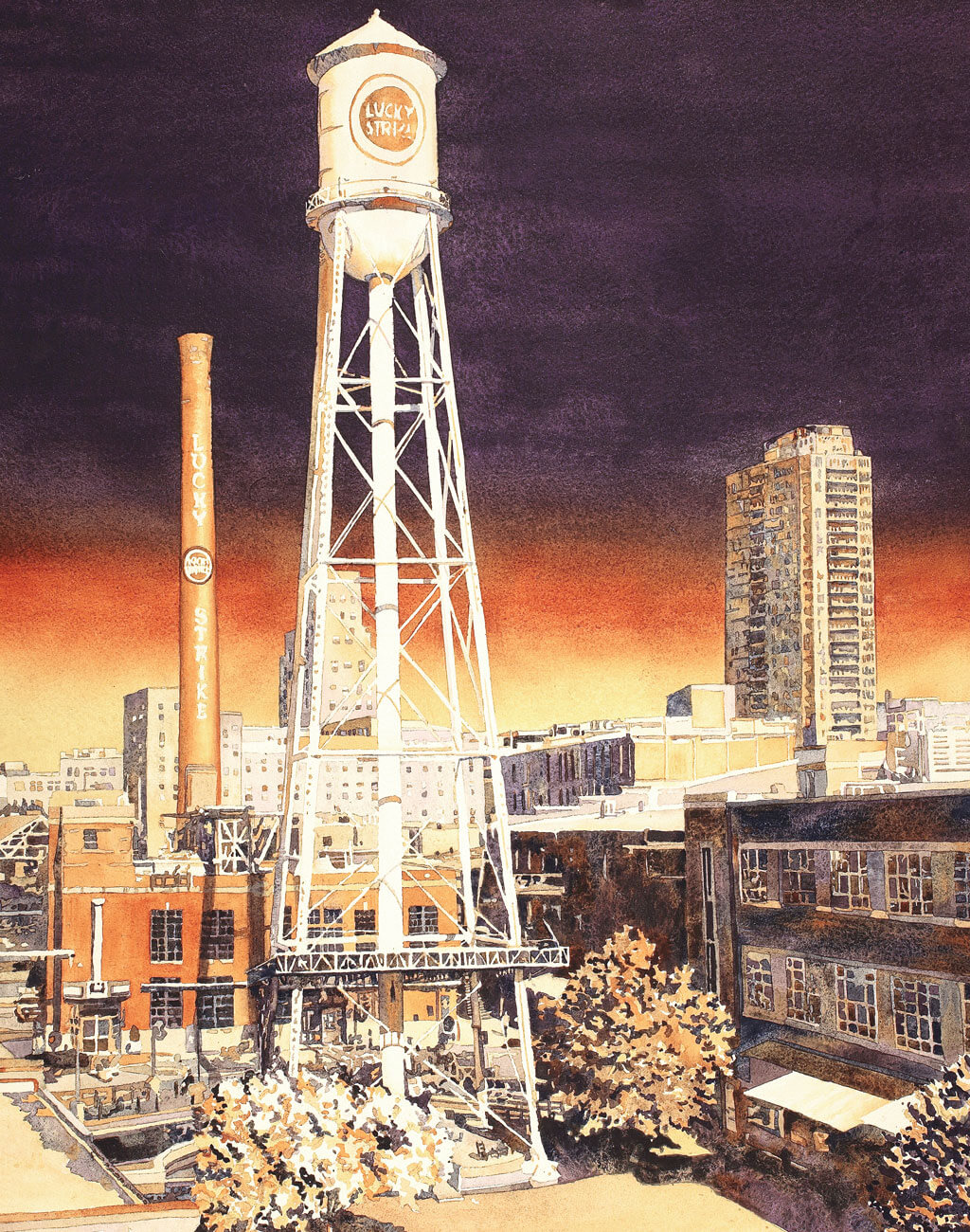 ALLAN BUTT // The timing was perfect. Butt had heard about an unmissable view of the Charlotte skyline, and as he approached the overpass on Matheson Avenue, the sun was just coming up over the horizon. It was early enough that the tracks below were full of trains yet to leave the depot, and sunlight glinted off the skyscrapers beyond. “It was just spectacular,” Butt says — a scene that plenty of people have seen from a car window, but one they may not have noticed. Butt grew up in Mobile, Alabama, and has lived all over the country, but seven years ago, he and his wife realized that Charlotte was home. “I have never lived in a place that was so international,” he says. “It’s so interesting; there are so many things to do.” And to observe: “I’m always looking out the window to see if anything hits me. I’m always watching the sky and the clouds and the atmosphere.” To see things that the rest of us miss, he says — that is the role of an artist. They make us stop and see the world. allanbutt.com 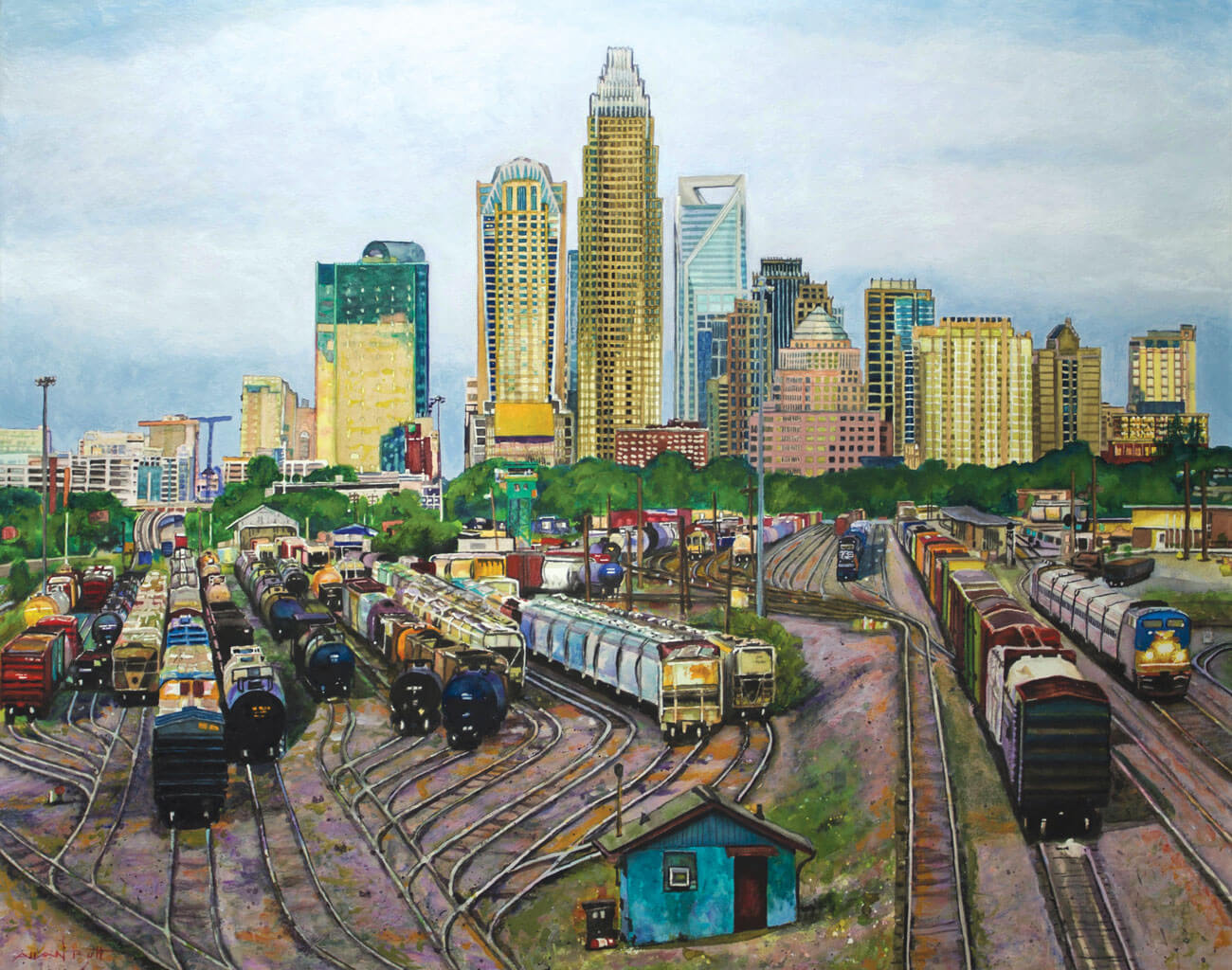 SHARON BASS // For Bass, the hunt for a plein air scene is an adventure: She loves to hit the road in search of places with the perfect combination of light, color, composition, and what she calls “immediacy.” “I often hear people exclaim, ‘I feel as if I can walk right into your painting!’” she says. Near her family’s place in Atlantic Beach, she was drawn to the waterfront view at Finz Grill in Beaufort and the shrimpburgers at El’s Drive-In in Morehead City. But she doesn’t have to venture far from her studio in Raleigh to find the qualities she’s looking for. At The Roast Grill, where her husband and son meet for hot dogs most weeks, she set up her easel right across South West Street and watched people come and go on a bright spring day. That stirred up a story, buyers of Bass’s art often tell her. That stirred up a great memory. sharonbass.com 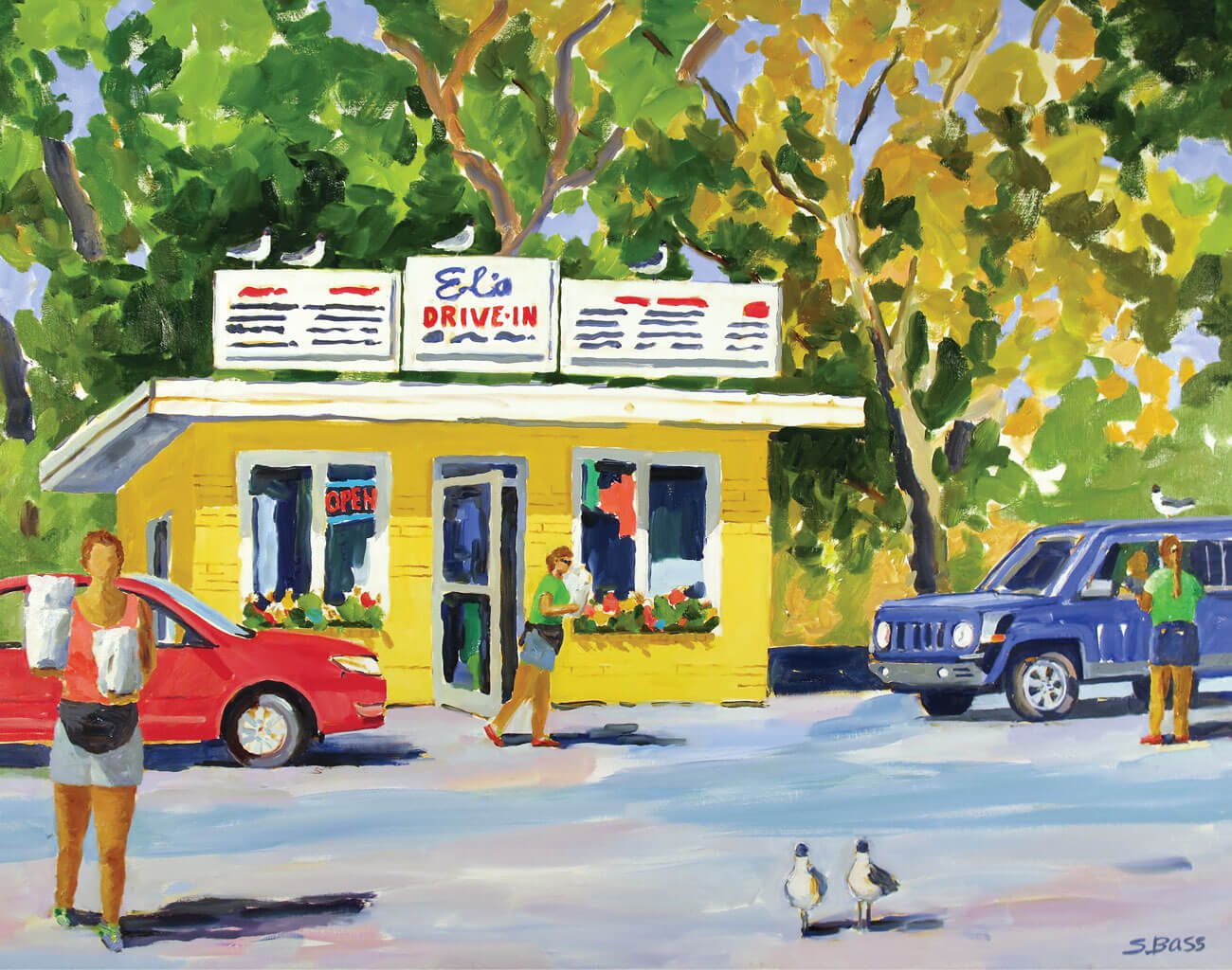 El’s Drive-In, painted by Bass, is a Morehead City mainstay.

For the Love of Landscape

RICHARD WILSON JR. // Growing up, Wilson’s family often gathered at his grandmother’s home in Robersonville, his uncle manning the grill while parents and kids played kickball and softball in the yard. After his grandmother died, the relatives drifted apart; meanwhile, Wilson noticed that familiar churches and homes were disappearing. So later, while raising his own family in Greenville, he began painting his “Southern Girl” series to reconnect his daughters, Bahja, Keona, and Jiyah, with the landscape he remembers. “I know this will be lost history if we don’t record it,” he says. Paintings like A New Day place youngest daughter Jiyah in scenes that are peaceful, simple, just like Wilson’s childhood. “We didn’t have much,” he says, “but we had each other.” richardwilsonart.com 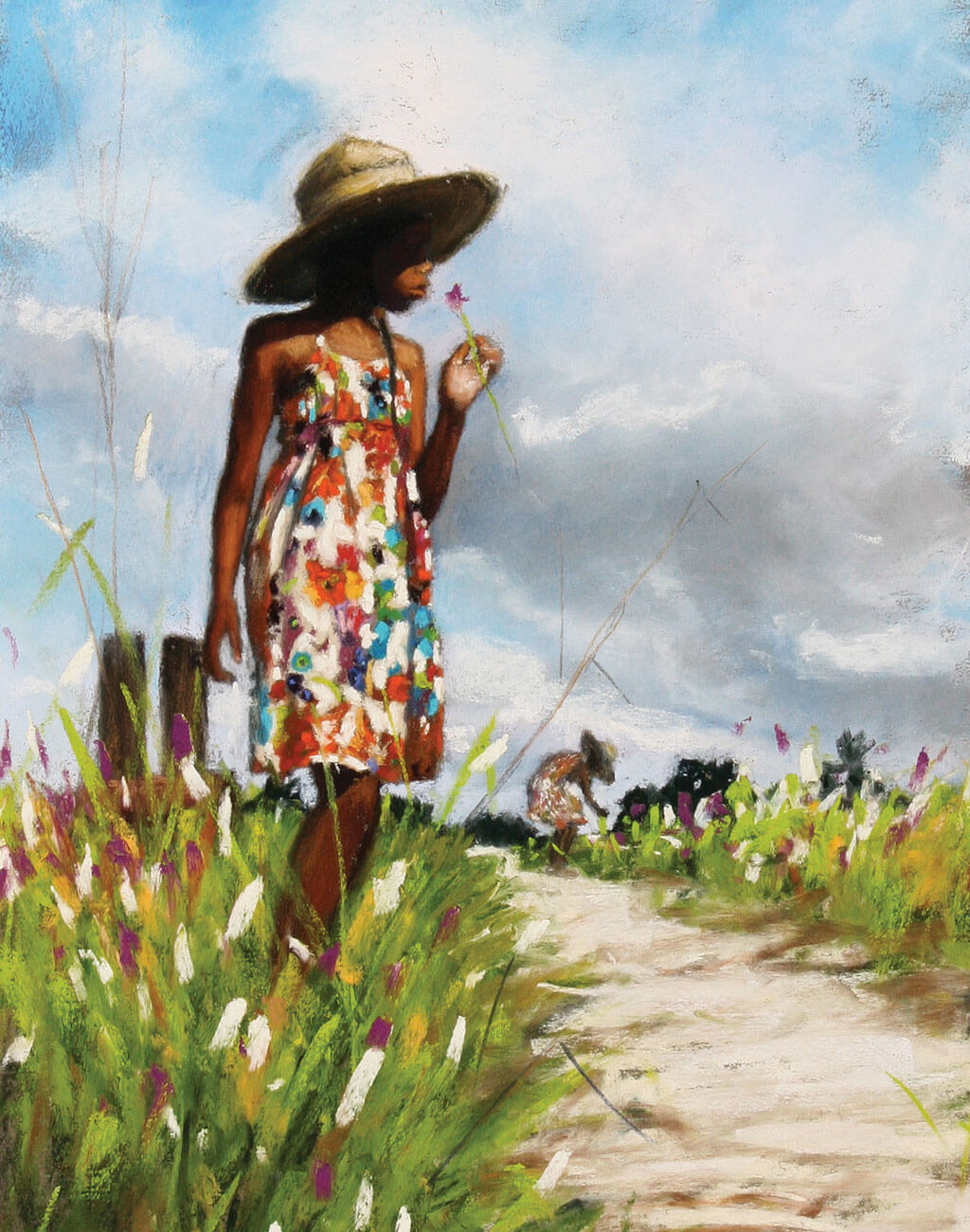 KEN HOBSON // When Hobson moved to North Carolina more than 30 years ago, he was taken with the rolling foothills and sweeping mountains, so different from the flat landscape where he’d grown up in Michigan. He worked as a senior artist at Disney and an illustrator for a firm with clients like General Motors and Dow Chemical before discovering something that surprised him: He loved teaching. He’s held watercolor workshops from Colorado to New Hampshire, but he often paints locations within 100 miles of his home in Greensboro — like the peaceful scene in Evening in Roaring Gap. The feeling of comfort in Hobson’s vision of Alleghany County is universal, but any North Carolinian knows it looks like home. kenhobson.com 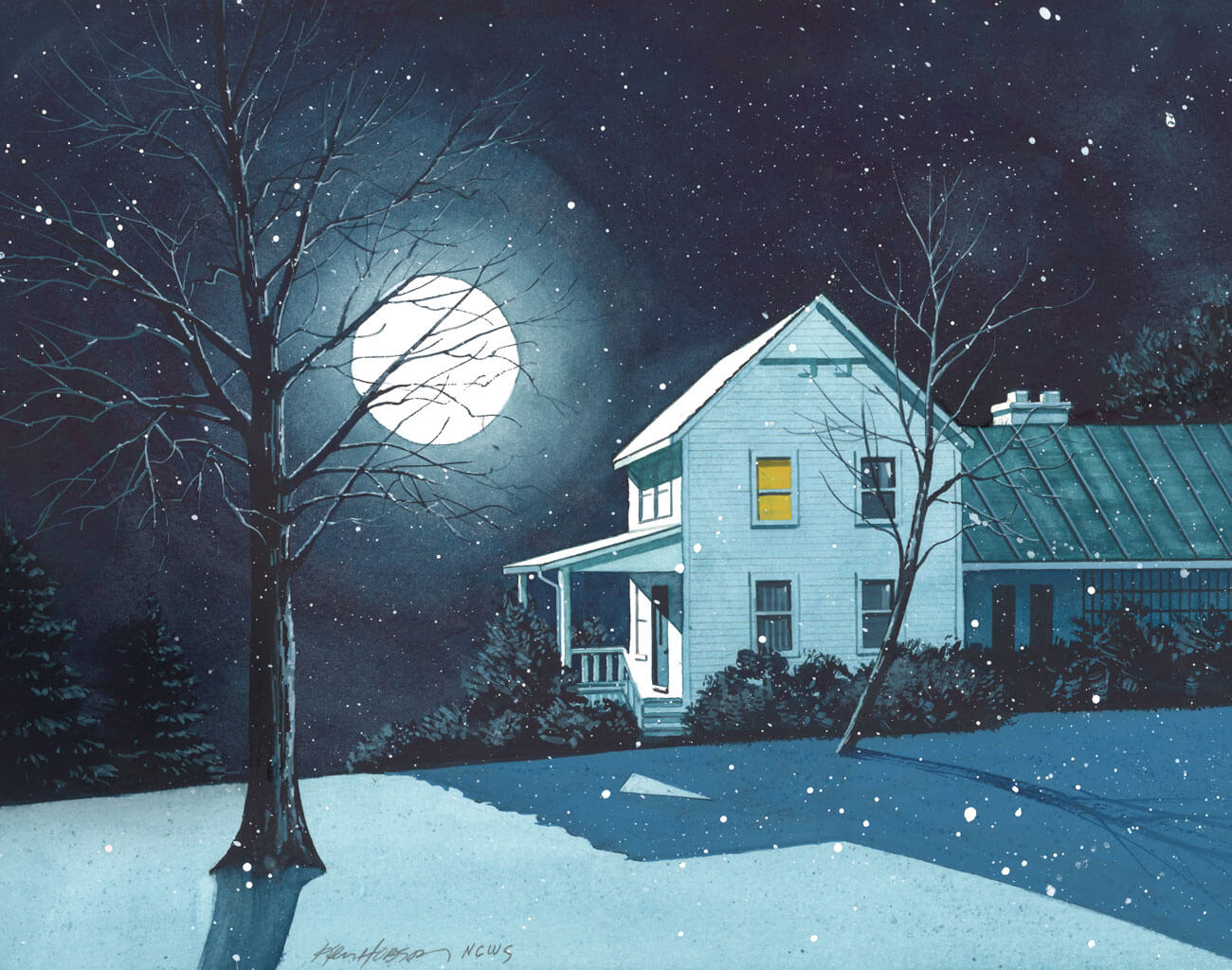 Hobson paints scenes that look — and feel — like home.