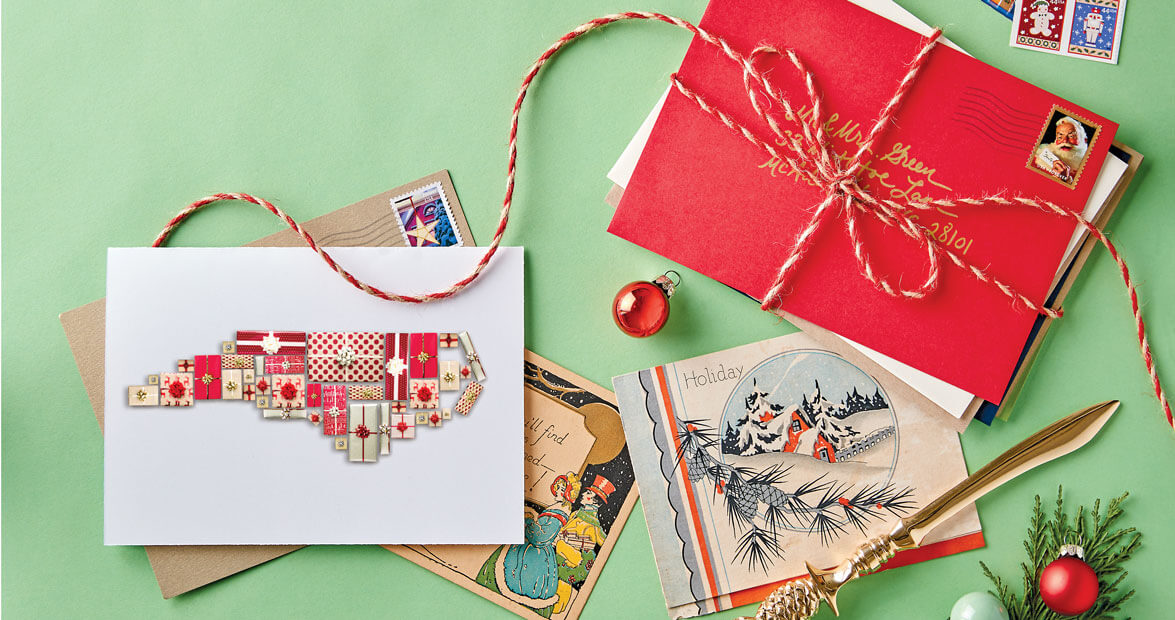 Home for the Holidays

Since its founding in 1902, Children’s Home Society of North Carolina (CHS) has placed more than 16,000 children into nurturing homes. To benefit their work with families across the state, CHS began selling Christmas cards more than 40 years ago — but it wasn’t until five years ago that the organization began featuring artwork from the children in their care. Now, professional artists in Raleigh, Charlotte, and Greensboro work with CHS kids — some of them adopted, some in foster care — to create their own works of art. The projects double as a form of therapy, and when recipients open these cards, that’s what they see: A child’s excitement not only about Christmastime, but also about spending quality time with other kids in foster care. For them, the joy is in the camaraderie. 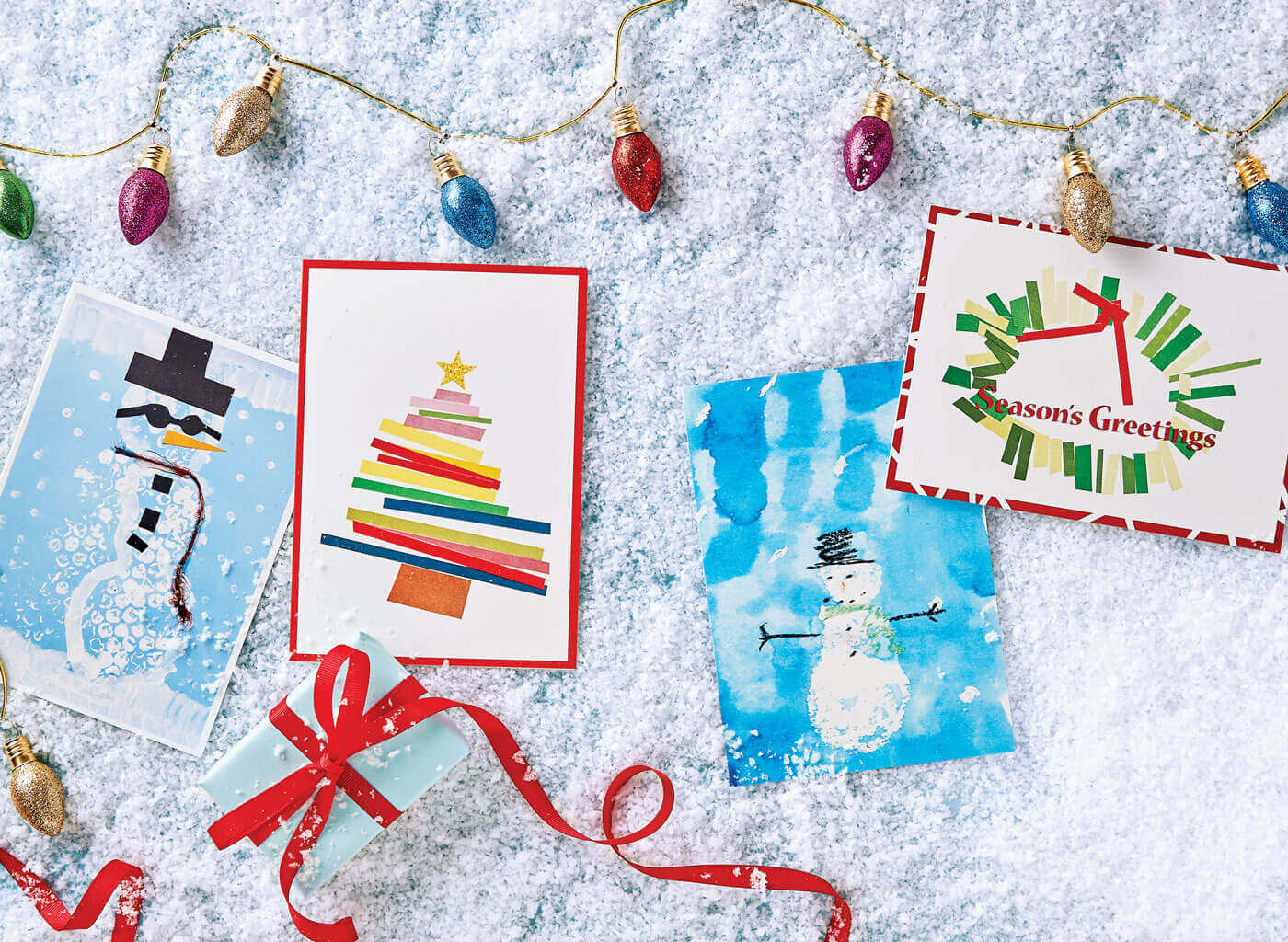 William Mangum’s snowy scenes impart a sense of serenity — and, for more than 30 years, they’ve also represented a helping hand. Around the time that Mangum first created a painting for Greensboro Urban Ministry’s Honor Card program, he had a chance meeting with a homeless man that blossomed into a three-year friendship. The man died in 1990, but his impact on Mangum was profound, and the artist has continued to create paintings for the Honor Cards every year since. Each $5 card has an inspiring theme — this year’s is “I’ll Stand by You” (below) — and the proceeds go toward food, shelter, health care, and education for those in need. In all, the program has raised more than $8 million for homeless agencies across the state. Mangum continues his work with Greensboro Urban Ministry, serving breakfast weekly and offering words — and images — of comfort.

Learn more and find out how to purchase at thehonorcard.com. 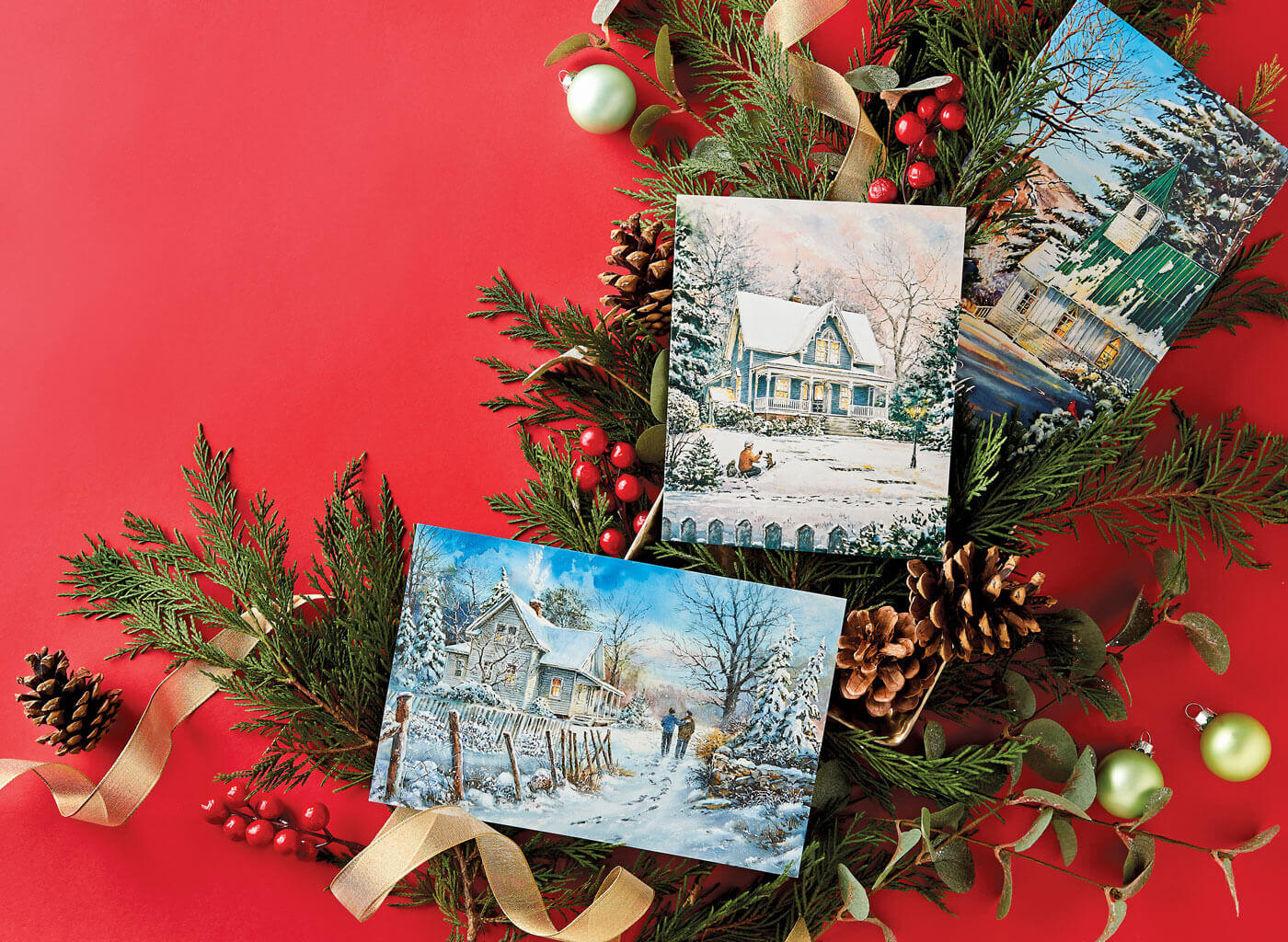 “When you have a letterpress piece in your hand, it’s an experience,” Chris Paul says. “Every piece can be unique.” He discovered traditional printing methods while in grad school; 20 years later, he spends as much time as possible in his print shop full of heavy machinery — a low-tech complement to his day job in software design. The Christmas cards that he creates with his wife, Danielle, often hold special meaning for their family: In 2017, during their son’s first semester at UNC, they thought of the flock of cardinals — also known as a “college” — that frequent their backyard. On that year’s card (bottom left), one red bird flies in to join his family for winter break.

Find the Pauls’ cards at oldnorthstatepress.com. 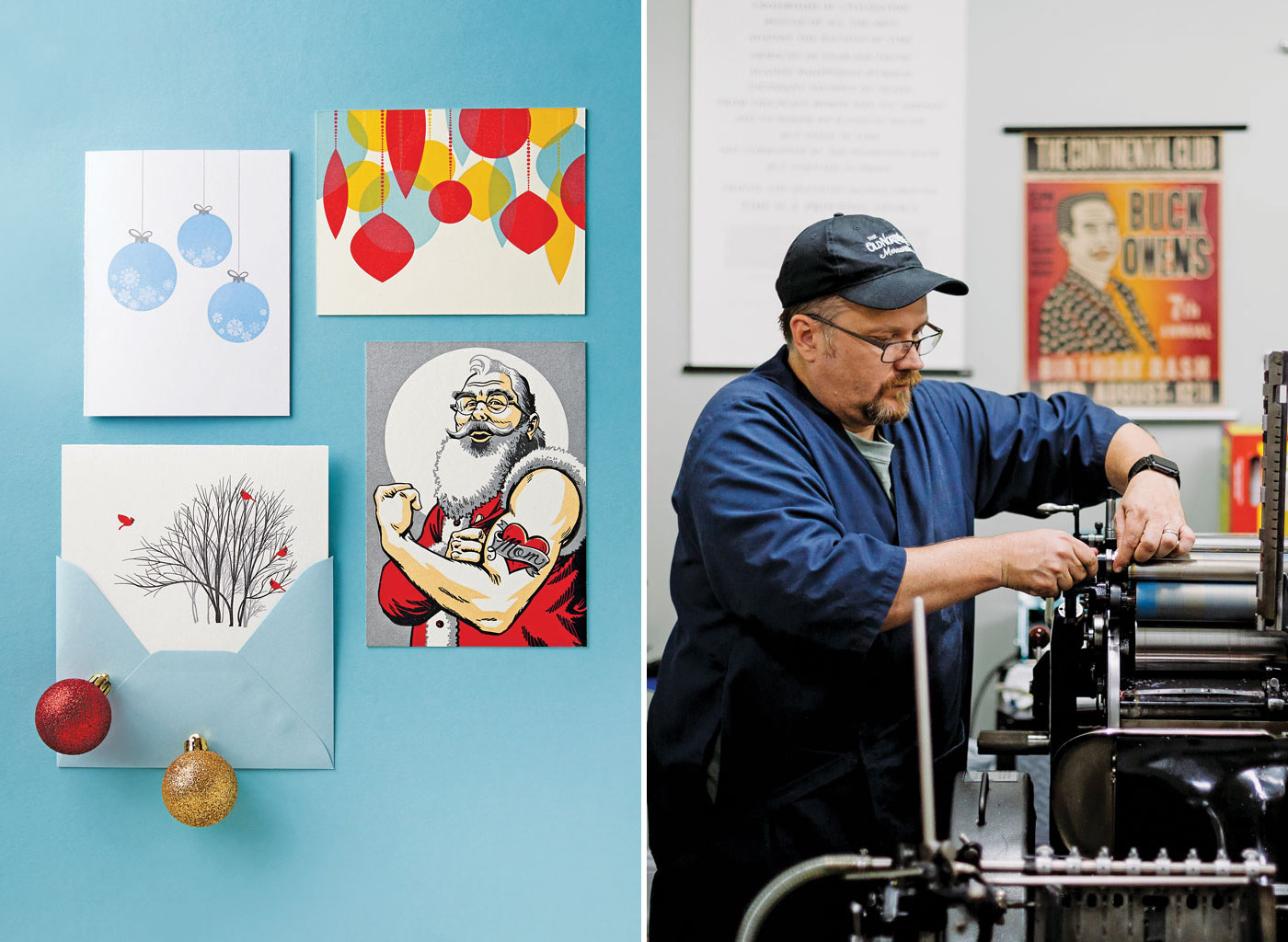 Chris Paul coaxes beauty out of his 1964 Heidelberg 10×15 “Windmill” printing press. “It can be complex, but in the end, it’s mashing things into paper,” he says. “It’s artistry and engineering coming together to make fun and beautiful things. And if you’re not making something fun and beautiful, what are you doing?” photographs by Stacey Van Berkel; Joshua Vasko

In 1980, Bob Timberlake — whose scenes of life in the South are so deeply familiar to North Carolinians — got to share his memories of Christmas past with a much wider audience. Timberlake was about a decade into his career as an artist when the U.S. Postal Service asked him to design a Christmas stamp, and he was thrilled. He drew inspiration from his own collection of antique toys: a drum, a 1920s-era horn with a hand-carved wooden mouthpiece, and a top from the early 1900s. The simple vignette resonated with people across the country; many wrote to him to tell him how much they loved his “Season’s Greetings” stamp, how it looked like the Christmases they remembered. “That made it very, very special for me,” he says. “I think it was more down-to-earth than people were used to seeing on stamps back then. More realistic.”

Learn more about Timberlake at bobtimberlake.com. 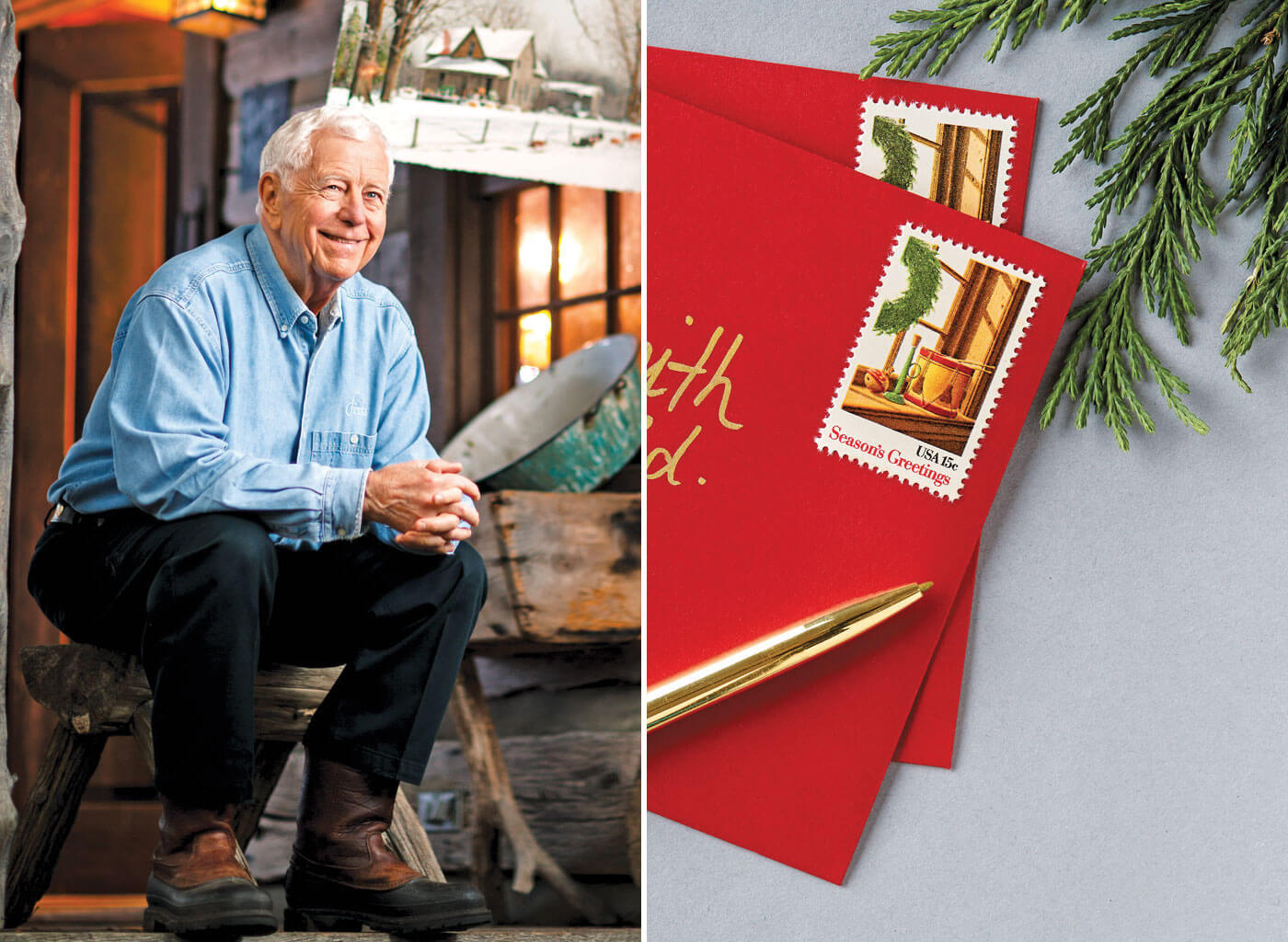 Bob Timberlake has always loved Christmas — “the smell of the wreaths and the tree,” he says, “memories of your first bicycle.” Now he’s making new memories with his seven grandchildren and three great-grandchildren. photographs by Jerry Wolford & Scott Muthersbaugh; Stacey Van Berkel

Joy to the World
CHARLOTTE

For as long as she can remember, Jayme Hennel has created art — first with crayons and paper, and now, years later, with digital media. She started her line of stationery, Hennel Paper Co., in 2012, while working as a graphic designer in Detroit, Michigan. A move to Charlotte brought fresh inspiration: Hennel and her husband traded gray skies for blue, a flat landscape for rolling green hills, and long winters for the rare, special snowfall. They love being surrounded by nature and taking road trips around the state. “I think that’s my dream life one day,” she says, “to get a camper, take the pets with us, and get away to the mountains.” The thought was so cozy that — like all of her best ideas — she put it on a greeting card. “I focus on creating cheery and bright designs that will make people happy when they open that envelope,” she says. “I want to share my joy with the world.” 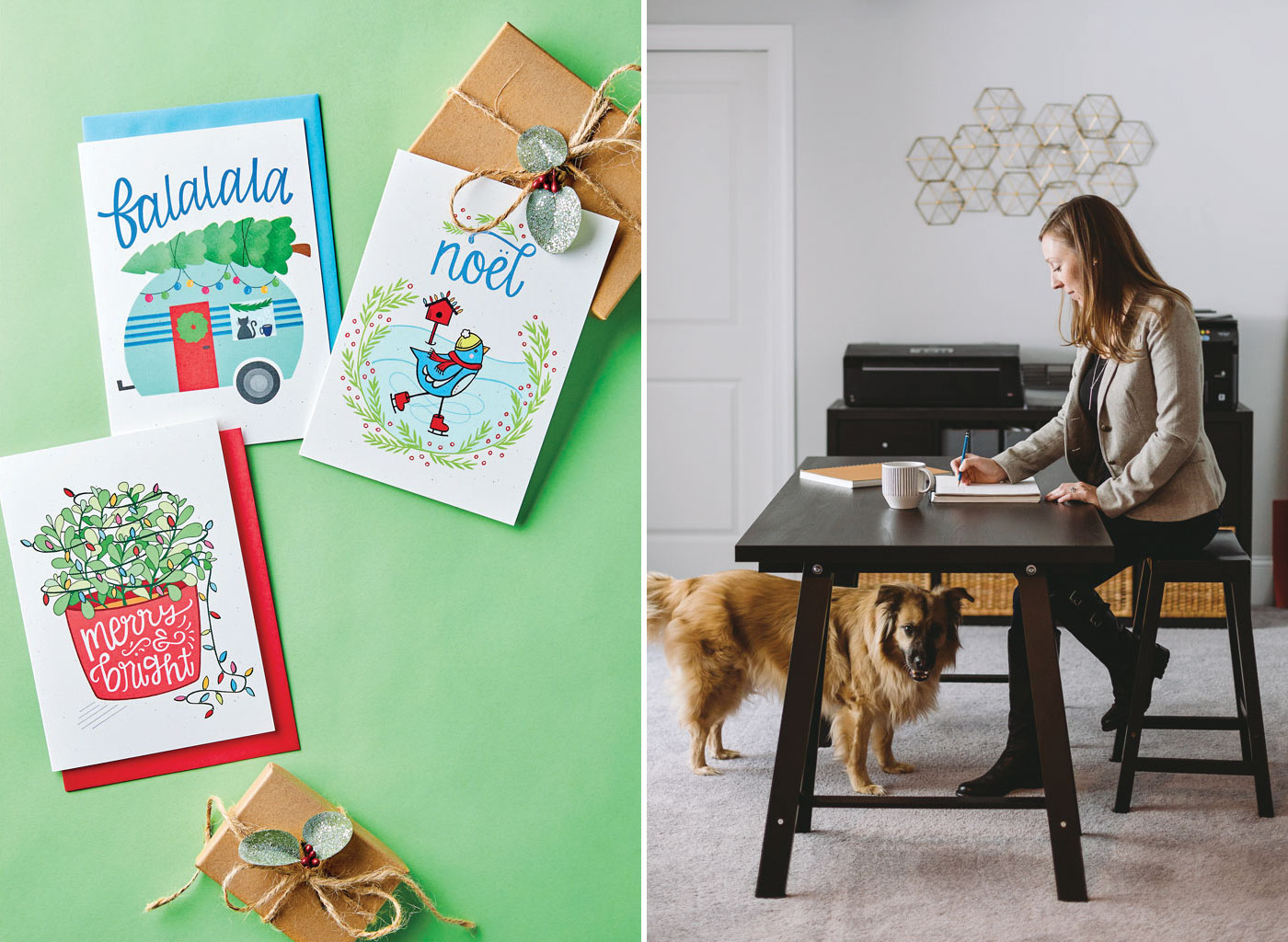 One of Jayme Hennel’s favorite things about making art is being able to work from home, surrounded by her pets. “They’re always around, helping me and getting in my way,” she jokes. Her five cats and two dogs include Dinah, a 13-year-old collie-shepherd mix that Hennel and her husband adopted this year. photographs by Stacey Van Berkel; Joshua Vasko

In 1955, when Wilhelm Reinhold Valentiner became the founding director of the brand-new North Carolina Museum of Art, he was nearing the end of a long and distinguished career that spanned several museums in major cities. Born in Germany, he moved to the United States to work as curator of decorative arts at the Metropolitan Museum of Art before holding positions at the Detroit Institute of Arts, the Los Angeles County Museum, and the Getty Museum. No wonder, then, that his interesting friends, colleagues, and acquaintances were scattered across the country. Included in his papers are a number of Christmas cards, many of them with an artistic sensibility and — in 1955, the year Valentiner received the cards on these pages — mid-century modern flair. See more of Valentiner’s holiday card collection here. 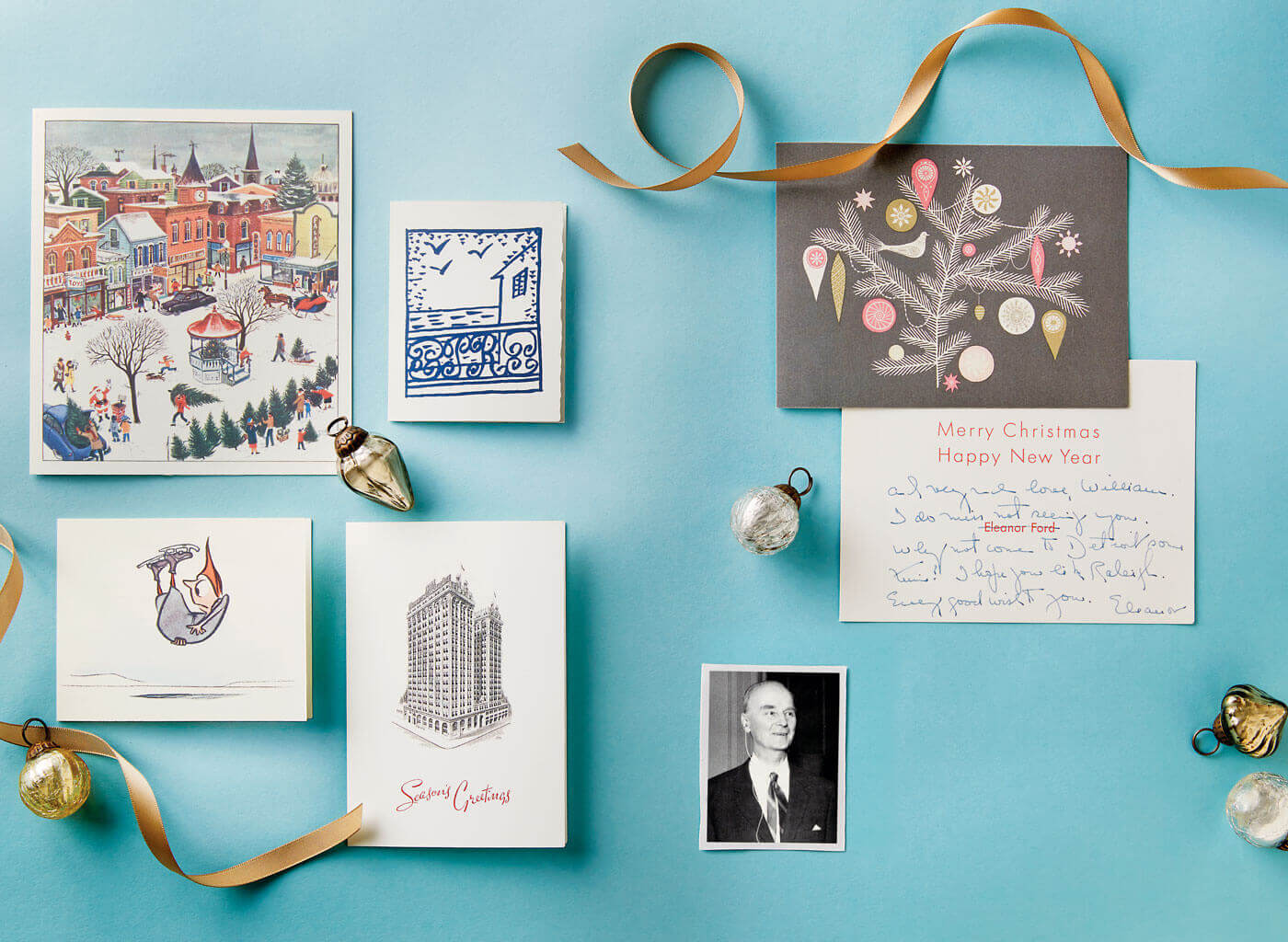 Eleanor and Edsel Ford — son of Henry — received art history lessons from Valentiner during his tenure as director of the Detroit Institute of Arts. photograph by STACEY VAN BERKEL; SOURCE IMAGES COURTESY OF THE STATE ARCHIVES OF NORTH CAROLINA

Christmas Day began as it always did aboard the USS North Carolina, with a reveille to rouse the sailors — and then a small band played carols over the ship’s loudspeakers. For three Christmases during World War II, from 1942 to 1944, the Battleship was in the South Pacific, and although there were big meals and burlesque shows, the conditions must have made it difficult to feel like celebrating. “There were no trees and no decorations,” Chuck Paty, a radioman from Charlotte, recalled of Christmas 1943. “It was really a day when you got homesick. The biggest events of the day were the Xmas meal and a large shipment of mail …” The USS North Carolina is a familiar sight on the Wilmington waterfront now, but its archive, full of slips of paper that once carried warm wishes across the sea, reminds us of a time when it wasn’t — and how much the simple exchange of a Christmas card means, so far from home. 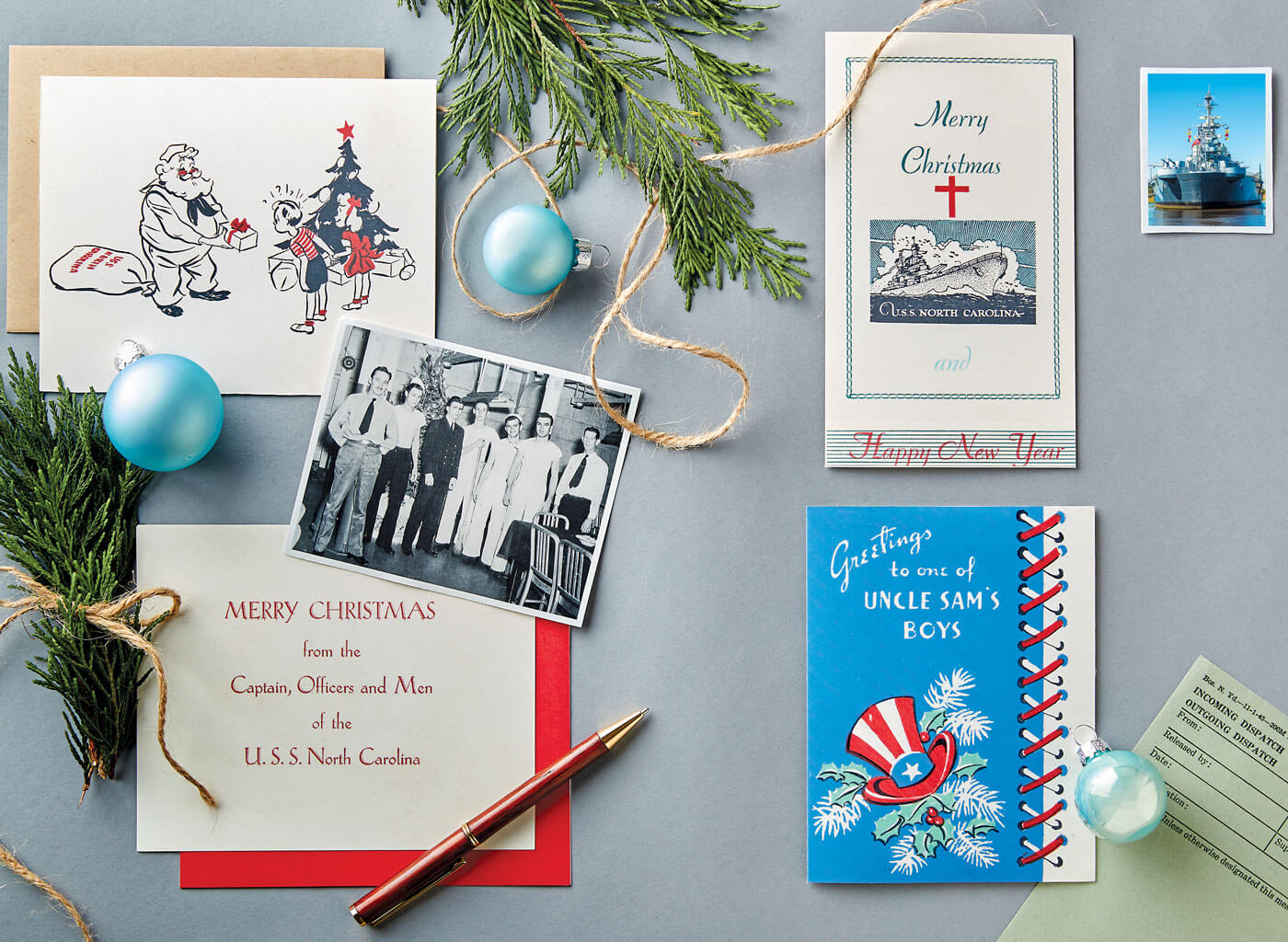 “You should put a Santa hat on that crab!” Watercolorist Mary Ellen Golden had painted plenty of crabs — around Wilmington, they’re bound to scuttle their way onto an observant artist’s canvas — but 13 years ago, she took her new gallery manager’s suggestion to heart, and “Crabby Claus” was born. It was the first in a line of Christmas cards sold in the Golden Gallery, which Mary Ellen opened in the Cotton Exchange in 1977 and now runs with her son, John, who’s also an artist.

“I try to include things that people will recognize from Christmas at the beach,” she says, like “Surf Santa” — really Mary Ellen’s husband — bringing home a holiday cedar, or shorebirds in search of a tree to decorate. 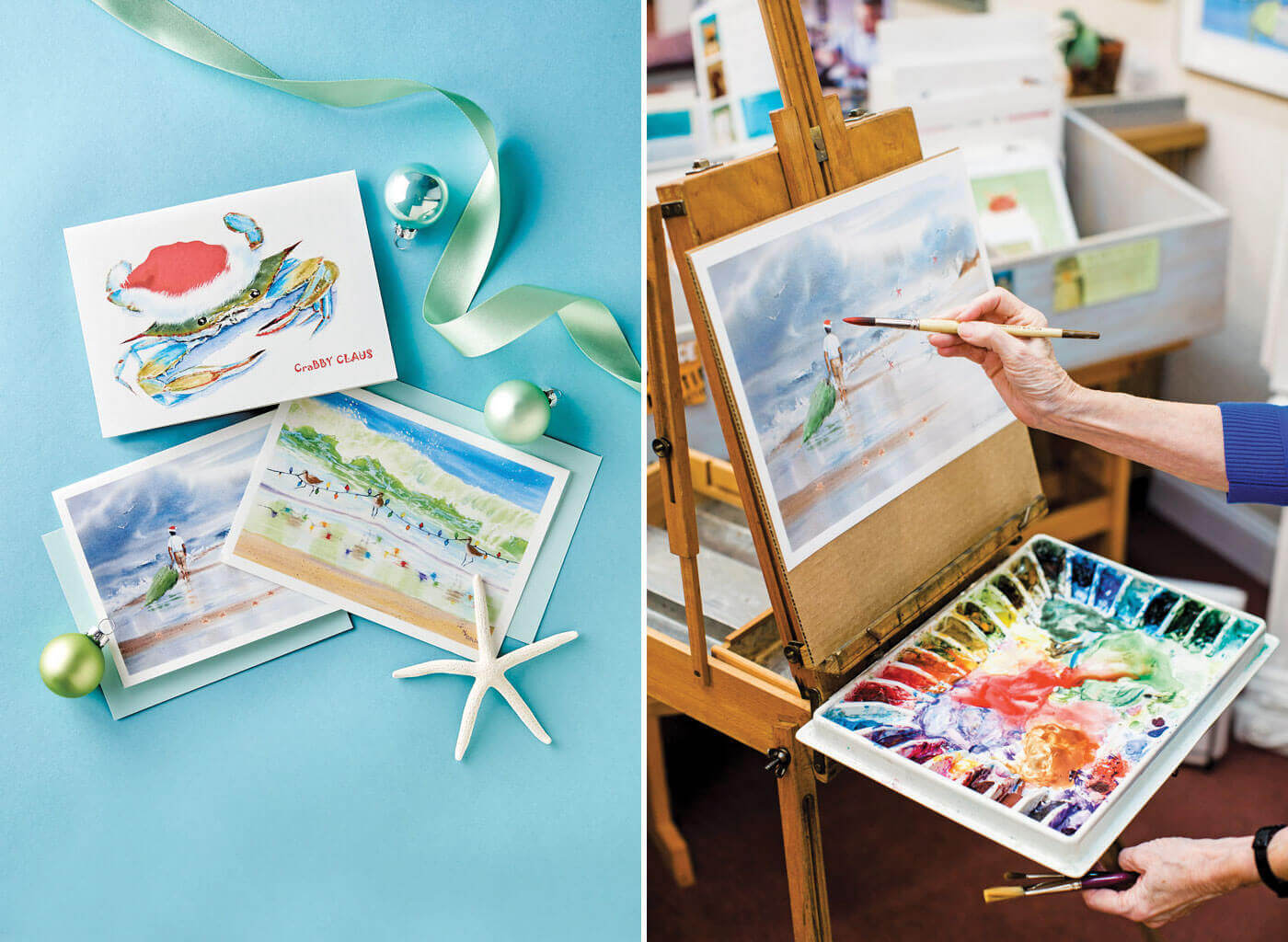 Wayne Hinshaw’s mother, Kathern, kept everything. After she died in 2013, her family spent four years going through her belongings, finding things they never knew existed — like a tattered album full of Christmas cards sent to Wayne’s grandmother Mollie between 1931 and 1942. Cards were precious then, Wayne points out. They used to be expensive to send. They were more delicate, too, printed on lightweight paper, not cardstock. In his grandmother’s album, the same handful of names turn up over and over — Bob and Ethel; Clarice and Dan; Cletus, Mozelle, and children — most of them a mystery to Wayne, connections lost to time. He can only guess at why Mollie preserved this slice of her life: “The novelty of it, and they were from people she knew, and they were just too pretty to throw away,” he says. “I think at that time, it was really special for someone to send you a card.” 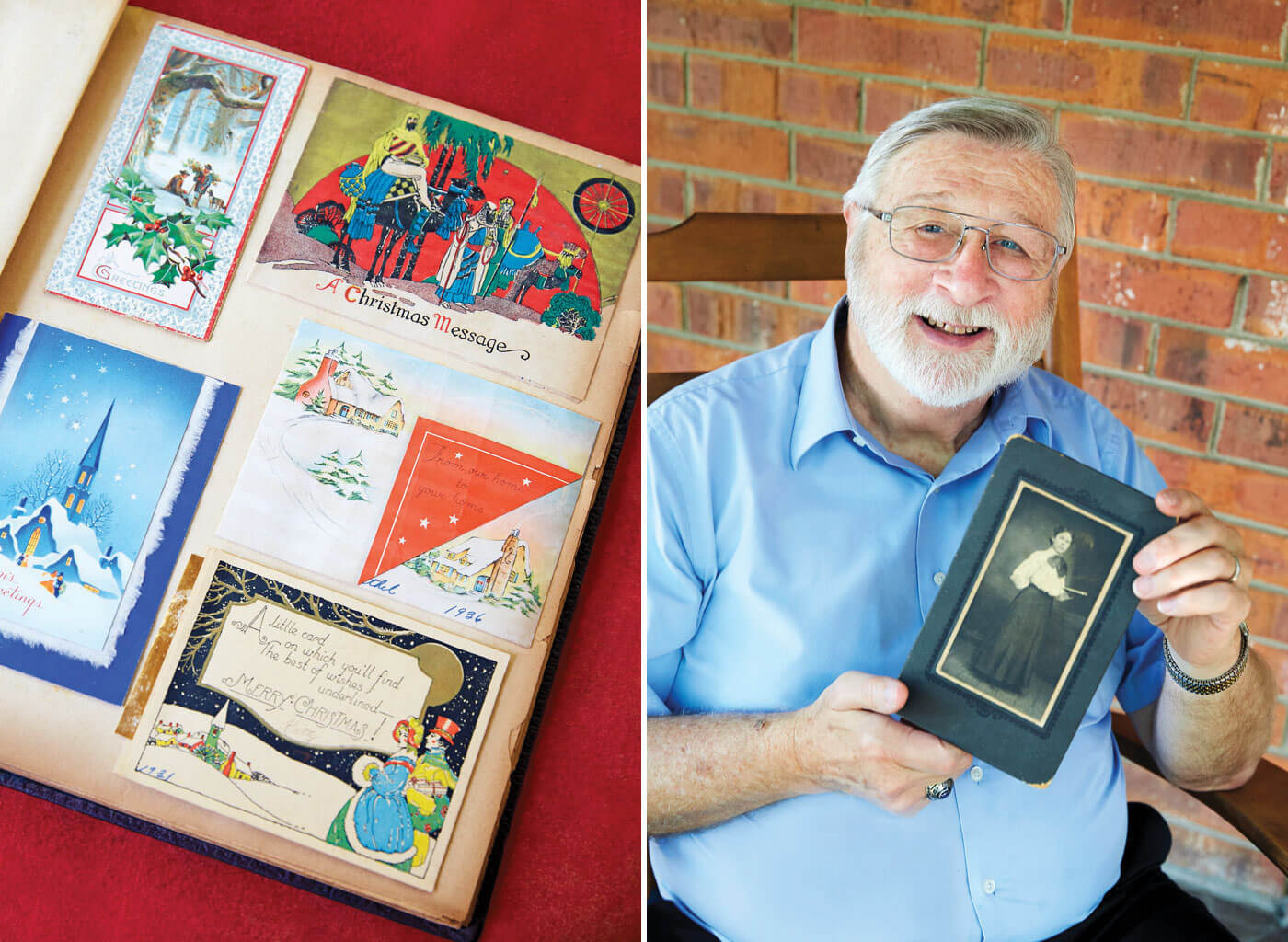 The wish lists may change, but the ritual of a carefully composed note to Mr. Claus is timeless. State archivists in the midst of processing records from Briggs Hardware — a mainstay in Raleigh since 1865 — were surprised to find a trove of envelopes tumbling out of an old account book. They were letters to Santa, modest requests made during the depths of the Depression. The Briggs family probably collected the letters to help their struggling neighbors — an ad in the December 6, 1932, edition of the News & Observer invited families to come meet Santa at the store. Nearly 90 years later, these earnest letters from the past are a reminder that Christmas is a season of enduring hope. 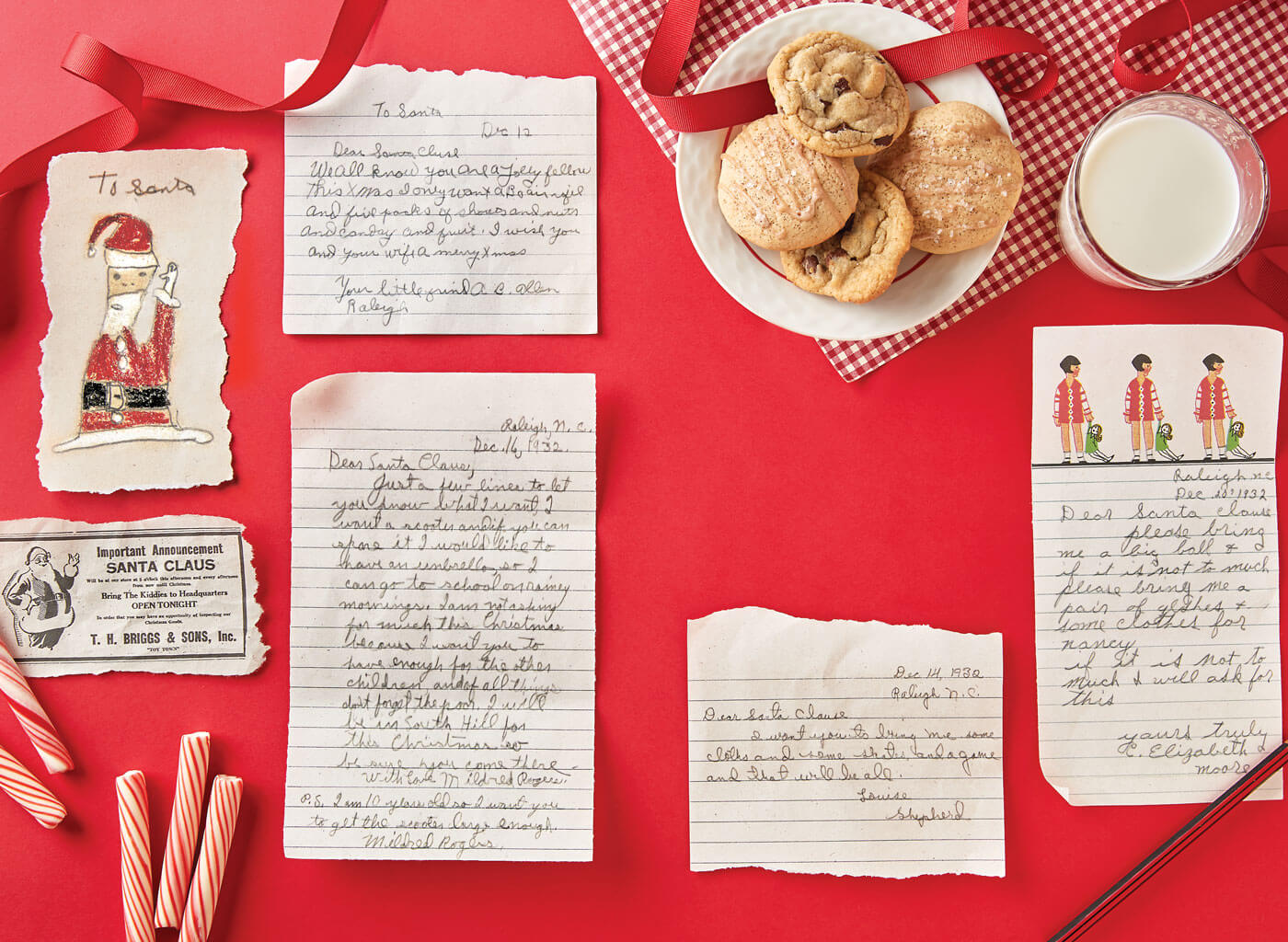 Writing to Santa is an age-old tradition. photograph by STACEY VAN BERKEL; SOURCE IMAGES COURTESY OF THE STATE ARCHIVES OF NORTH CAROLINA