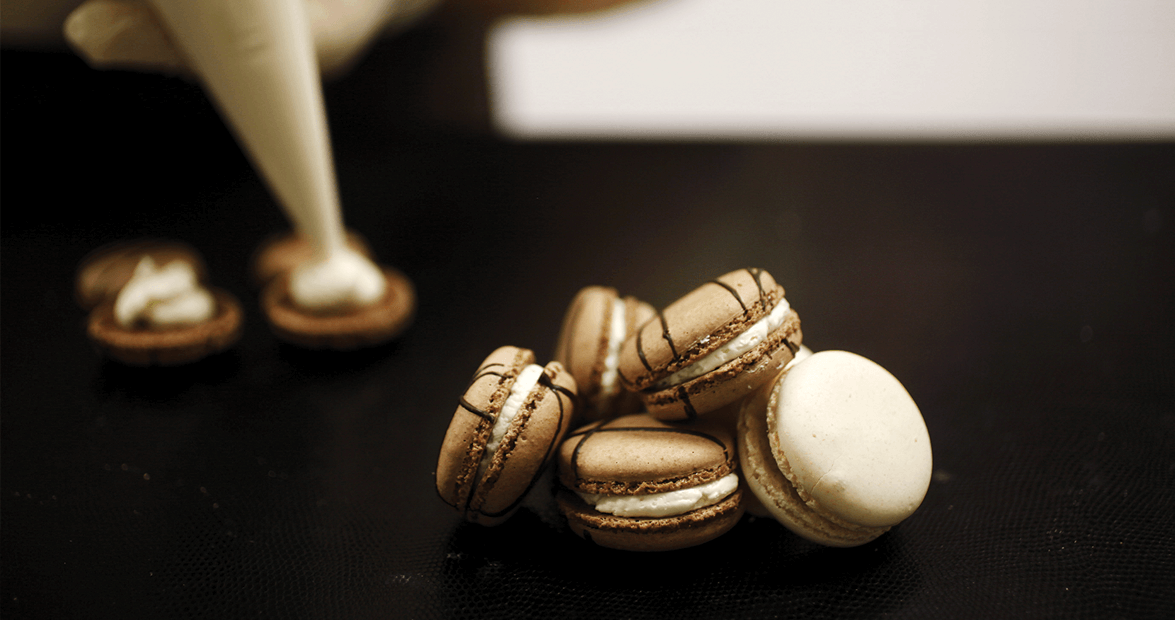 Charlotte’s sugar mama stands above the fray. Her head hangs down. Her hip juts to the right. She peers out over a crowded bar in the lobby of Charlotte’s Ritz-Carlton hotel from beneath a sloping wide-brimmed hat. Below her, a jazz band plays John Denver’s sentimental “Leaving on a Jet Plane,” but she remains unmoved.

That’s because Madam Cocoa is made entirely of chocolate. Yes, go ahead, take another look at the photo … chocolate.

That hat? Her wavy hair? Sculpted from white chocolate. Her blue and white blouse? The red and white skirt? Colored cocoa butter squares and curled red sheets of chocolate, attached to her body with warm chocolate as adhesive. And speaking of her body, that’s chocolate, too. A pastry chef filled a dismembered mannequin mold with more than $1,200 of melted dark chocolate. When it cooled, the chef glued the pieces together with warm chocolate one appendage at a time and sprayed the exterior with, of course, melted white chocolate, giving her a silver skin tone.

All in one piece, tucked into a corner above a row of booths, wearing chocolate shoes and chocolate jewelry, Madam Cocoa stands 5 feet 8 inches tall. And you’d be forgiven for not noticing her edible secrets. That’s the way the hotel prefers it. There’s no sign advertising that she’s made of chocolate — the Ritz, after all, doesn’t want to encourage people to sample her — so almost weekly a puzzled guest asks the receptionist what the story is with the mannequin in the lobby.

The receptionist knowingly grins. And then he begins to explain.

After The Ritz-Carlton opened on East Trade Street in 2009, a 750-square-foot vacancy sat inside the hotel’s front, past a staircase and a small fountain. Jon Farace, the hotel’s executive chef, suggested that a chocolate bar/restaurant fill the void.

Farace knew that dessert spots, from chocolate bars to macaroon purveyors, had been popping up — quite successfully — in New York City neighborhoods for about a decade, but there were only three dessert venues in Charlotte and just one exclusive place uptown. A look around today at all these colorful treats and all the people happily indulging in them suggests his instincts were correct. Bar Cocoa has been a success since opening in 2011.

Farace focused on chocolate because it’s an affordable luxury with a long history as a communal delicacy. The health benefits might be modest, but chocolate has been known to comfort or enhance celebration. It can be enjoyed with friends, taken home as a treat for a loved one, or eaten alone as reward or consolation.

Chocolate can be traced back to the 1500s in Central America, where the Aztecs held huge feasts culminating with drinking thick, foamy chocolate mixtures made from the cacao tree. Spanish conquistadores who sampled the drink brought cacao beans back to Europe. Eventually chocolate houses popped up in France and later England, where they soon rivaled pubs as friendly meeting venues.

Bar Cocoa functions much the same way. Bankers stop after lunch eager for a treat — and a sugar rush — before returning to spreadsheets. Girlfriends catch up over afternoon tea. And on weekend nights, it swarms with people admiring its row of silver-dollar-size macaroons in hot pink, mint green, cream, Smurf blue, burnt orange, cabernet red, and lavender.

“It’s so pretty,” says a middle-aged woman as she tucks her arm inside her husband’s elbow. She pulls him to a case of truffles and feels a need to explain her awestruck exclamations to the cashier. “This is our decadent night out.”

Many are so engrossed by the colorful desserts that they fail to even notice the most elaborate piece of chocolate in the room: Madam Cocoa.

Every bit of her is edible, but unless you’re close enough to see where the sun has melted her dress into faint dribbles resembling running candle wax, it’s hard to tell.

Farace — dressed in a tall, white chef’s hat and a baggy, white smock — sits in a Bar Cocoa booth to fill in the rest of the story. He first envisioned Madam Cocoa after hearing about a chocolate dress on a mannequin at another hotel. He thought a woman made entirely of chocolate could help drive attention to his dessert bar.

Joshua Cain, the pastry chef at the time and a graduate of Cape Fear Community College and Johnson & Wales in Charlotte, built her over 95 hours in Bar Cocoa’s kitchen, known as the Cocoa Lab. “I’ve found that chocolate and sugar is the medium that I work with,” Cain says. “I see myself as an artist.”

Cain began by melting dark chocolate in an industrial-sized chocolate warmer and filling the mannequin mold. He used colored cocoa butter to make parts of her clothing red and blue, spreading those pieces as thin as a few sheets of paper on the counter and cutting them into squares after they dried. Cain curled the red sheets to create Madam Cocoa’s billowing skirt. And there she was.

“Madam Cocoa exists,” Farace says of the fake/real woman of his imagination, 75 pounds of chocolate, who now stands in his lobby. “She’s ours.”

Madam Cocoa hasn’t moved since her creation, but that hasn’t stopped her from keeping up with fashion. The Bar Cocoa staff changes her dress every six months so that she can remain stylish. (The red, white, and blue outfit was for the Democratic National Convention.) The wardrobe swaps also allow part of her melting right side to be replaced.

“A lot of people do question,” Cain says. “Whenever they find out it’s all chocolate, they’re blown away.”

It’s 8 o’clock in the morning in the kitchen past Madam Cocoa, and everywhere you look there are cupcakes.

Two dozen red velvet cupcakes sit on the counter, their rounded maroon tops bald and begging for cream cheese icing. Rows of naked devil’s food and pumpkin cupcakes are stacked beside them in a towering cart of metal industrial cooking trays that overlook half a dozen carrot cake cupcakes topped with cream cheese icing. There are even cupcakes in the trash can, where dated, unwanted ones pile up every morning.

“We probably go through close to 200 a day,” current pastry chef Jeanette Payne says of Bar Cocoa’s daily demands as she plucks a pumpkin cupcake for her breakfast and warms it in the microwave. “Plus whatever we go through at night.”

Not only are cupcakes everywhere, but there’s also another six feet of countertop covered by a host of individual chocolate desserts: double chocolate mousse, chocolate cheesecakes, and peanut caramel chocolate tarts.

Working here takes some serious self-control for those without the restraint of Madam Cocoa. The smell of vanilla and nutmeg in batter mingles with lime zest and toasted coconut. A standing mixer clangs as it whips air into a milk chocolate Chantilly cream. Nearby, a whisk pings the edge of a pot of bubbling caramel.

A chef cooking entrees of fish or steak can’t nibble. But if you’re preparing macaroons or placing chocolate-covered almonds on cheesecake, no one will notice. This writer, for one, can’t stop sampling all that surrounds — a pumpkin cupcake, a Rice Krispies Treat, a coconut cake, a zafira cake, a leftover slice of the signature house dessert called Bar Cocoa that’s caramel icing on top of hazelnut-chocolate filling on top of crunchy praline.

Payne, herself, bites into a pumpkin cupcake, and I ask if every morning starts this way.

“No, not usually,” one of Payne’s colleagues replies. “Just the good ones.”

Yet Payne — who helped build Madam Cocoa and fills the display cases daily and, in turn, the bellies here — never sits down at Bar Cocoa and really savors her treats. She comes to the kitchen somewhere between 4 a.m. and 6 a.m., tucks her light brown hair inside a white skullcap, wraps a brown apron around her waist, and puts in up to 12 hours making desserts. Then, like an architect who never meets the family who moves into the house he designs, Payne leaves her laboratory without ever witnessing the wide eyes of those who enjoy her sweet creations.

But at the end of a recent workday, she approaches the counter. She orders a coffee, a slice of Bar Cocoa, and a couple of macaroons. Then she takes a seat in a booth. She watches the writer across the table as his eyes grow at the first bite of the signature Bar Cocoa dessert. She grins when a dulce de leche macaroon, her personal favorite, joins.

Payne knows that most days don’t end with dessert. Just the good ones do.