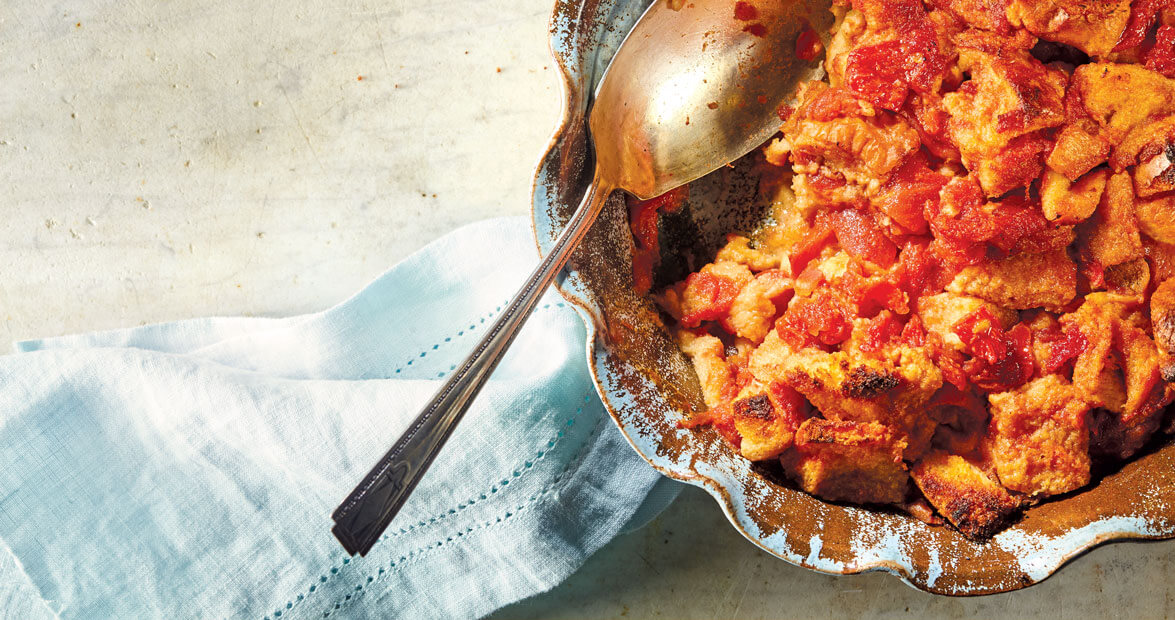 Bertie County may be sparsely populated, tucked up in the northeast corner of the state next to Albemarle Sound, but it still manages to have two claims to food fame. The first is the county’s famous peanuts — big, crunchy, and beloved statewide. Then there’s the lesser-known specialty that locals mostly keep to themselves: tomato pudding.

Yes, pudding — but not the sweet, creamy kind. This one uses a base of stale bread or day-old biscuits for texture. But all you taste is peak tomato: the fruits’ brightness heightened by a little sugar, sometimes a dash of cinnamon or nutmeg, and usually a good sprinkling of black pepper. At Heritage House restaurant in Windsor, owner Rachel Pierce knows the regional palate. She wouldn’t think of not having tomato pudding on the menu every day as a side dish, using a recipe handed down from her grandparents. “If you don’t have tomato pudding,” she warns, “they get really upset with you.”

Twenty miles up the road in tiny Aulander, Betty Drake just opened her own restaurant, Betty’s Catering and Southern Diner, after years of being known as a great local cook. (A native of Bertie County, she’s quick to correct your pronunciation in a friendly way: It’s ber-TEE.) Drake’s tomato pudding recipe has been passed down through at least three generations of her family. “People love tomato pudding,” she says. “I don’t do it every day, but I usually do it for Sunday.”

Black pepper is the key to her version. “It’s so simple, you don’t think of it as a recipe,” she says. “The pepper gives it a little bite.” Drake serves her tomato pudding buffet-style as a dessert alongside what she calls “the other country puddings,” like milk pudding (reminiscent of bread pudding) and sweet potato pudding. “I can’t call it anything except a dessert,” she admits. “Like a sweet potato casserole — I can’t call that a vegetable either. Too much sugar.” 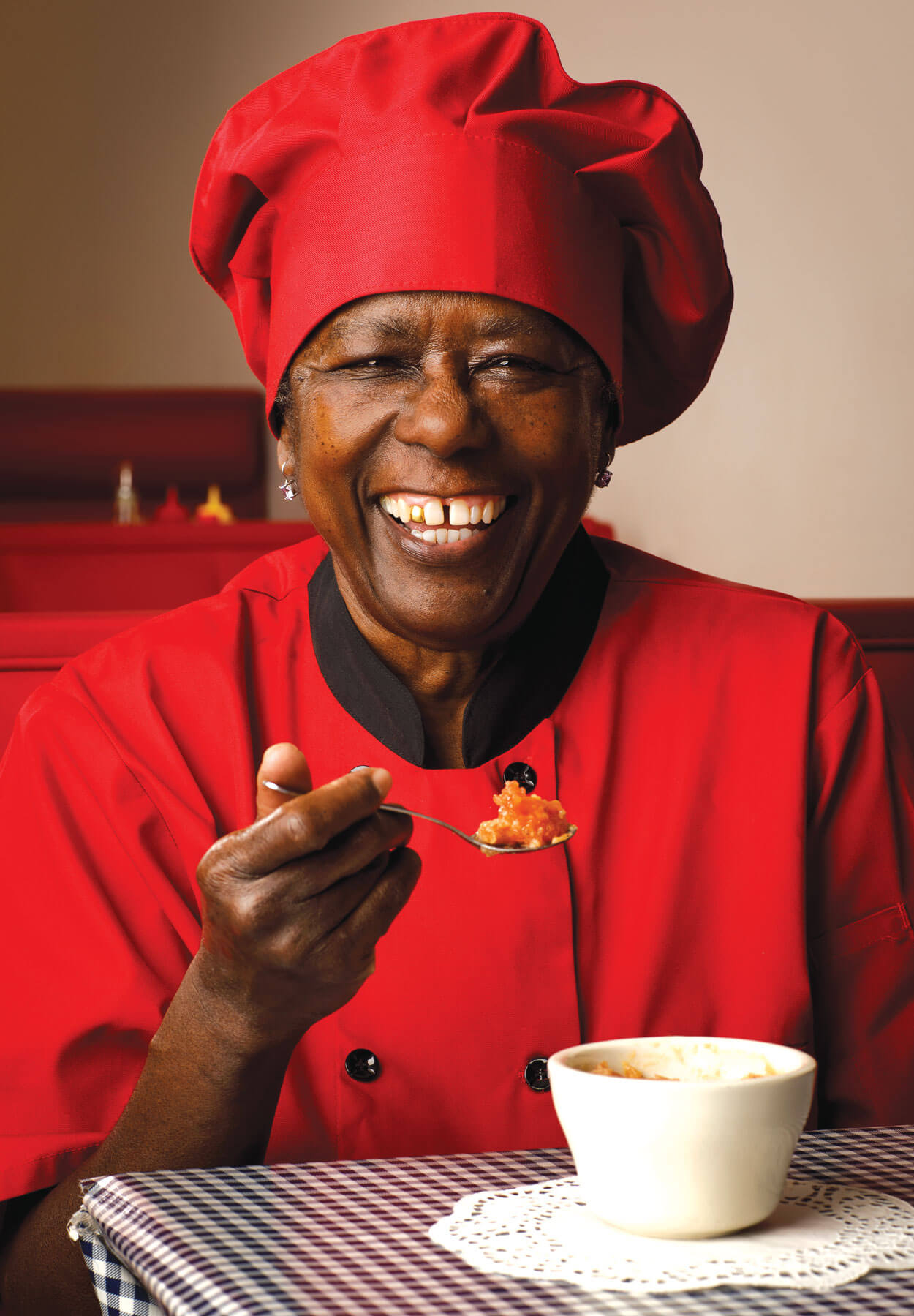 Bertie County cooks put their own stamp on the local specialty. Some use canned tomatoes; others insist on fresh. There’s a white bread versus day-old biscuits debate. And folks will strongly argue their positions on cinnamon, black pepper, and nutmeg. Yet everyone agrees that the dish originally took shape around what people had on hand: leftover bread and garden tomatoes. Because a bumper crop of homegrowns will ripen too quickly to eat all at once, people canned their tomatoes to use in winter. While many recipes today are made with store-bought cans of tomatoes, the pudding was originally made with fresh tomatoes in the summer and home-canned tomatoes in the winter. Either way, when cooked in a casserole dish — bubbling in butter, caramel-like bits crusting the edges — tomato pudding is immediately familiar, yet unlike anything you’ve had before.

Somehow, though, the dish never caught fire throughout the South. Searching through old cookbooks, eagle-eyed readers can find the recipe lurking under different names. In Edna Lewis’s first book, The Taste of Country Cooking, about the food of her childhood in a Virginia community settled by freed slaves, the recipe for baked tomatoes is almost the same, including stale bread, stewed tomatoes, sugar, and black pepper. Old recipes for “scalloped tomatoes” usually involve crumbled bread or biscuits, tomatoes, and sugar, too.

There’s also a British influence at work in tomato pudding: Eastern North Carolina was settled by the English, Scottish, and Irish, countries that use “pudding” to mean a lot of things — from meat pies to sausages to compotes. Before it became the name of a dessert, “pudding” originally meant anything boiled in an animal-based casing or cloth. English summer puddings are simply bread-lined bowls filled with stewed fruit — the very ingredients in tomato pudding.

“It’s so simple, you don’t think of it as a recipe. The pepper gives it bite.”

Ben Speller grew up outside Windsor, where fresh or home-canned tomatoes and leftover biscuits were always the basis for tomato pudding. Now a retired college professor and administrator living in Edenton, he still makes the dish for special occasions, including Thanksgiving and Christmas. He prefers nutmeg to cinnamon, and he likes to let the casserole sit overnight in the refrigerator before baking so that the biscuits soak up plenty of liquid. Like a strata, his version puffs up when baked.

Speller, who is African-American, says that the English style of tomato pudding fits with Bertie County’s history. His own family descended from English plantation families that date to 1670 and settled along the Chowan, Cashie, and Roanoke rivers. “That area is a little different,” he says, because it was so isolated. “Europeans settled with African slaves and indentured servants and local native people, up and down the rivers. They’ve been here a long time, and they hang on to things from the different cultures.” However tomato pudding arrived, it has stuck around for one simple reason: It’s practical. “In the South,” Drake says, “the older people, they could make a meal out of anything.”

From Betty Drake of Betty’s Catering and Southern Diner in Aulander.

Coat a rectangular baking dish with nonstick cooking spray and set aside.

Set up a bowl of ice water. Bring a pot of water to a boil. With the tip of a knife, cut an X in the bottom of each tomato and drop in the boiling water for 1 minutes. Scoop each one out and drop into the ice water to cool. Working over a bowl to catch the juices, pull off the skins and discard.

Slice each tomato in half and use your finger to scoop out and discard the seeds. Chop the tomatoes coarsely and return to the bowl with the juices. Stir in the sugar, vanilla, salt and season generously with black pepper. (Many versions also include a small amount of ground cinnamon or nutmeg.)

Tear the bread into pieces or crumble the biscuits, leaving big chunks. Stir into the tomato mixture. Pour into the prepared baking dish. Cut the butter into bits and dot over the top.