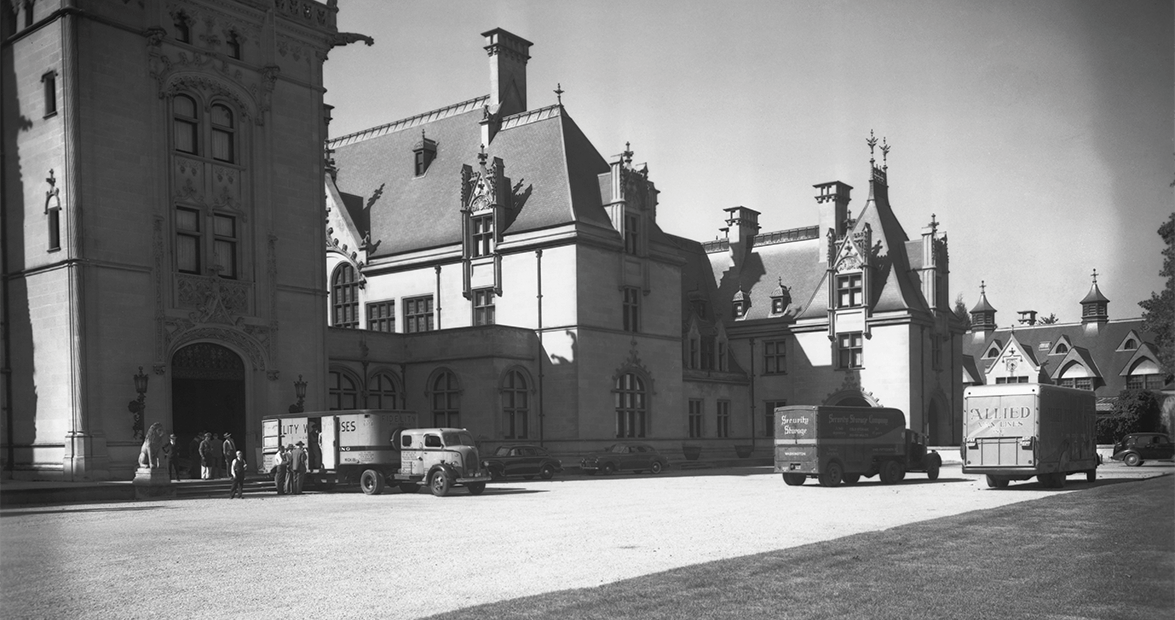 The Biltmore Estate looms like a great citadel, a triumph of architectural audacity.

It demands to be seen, inspected, and admired. It invites the prying eyes of awestruck tourists. And the tourists kept coming, even when this show-off house sheltered a top-secret wartime operation.

During World War II, as the world caught fire, some of America’s most indispensable works of art needed a sanctuary. Among them: a classic portrait of George Washington by artist Gilbert Stuart, who captured Washington’s countenance by stroking oil on canvas, a task requiring his subject — the warrior who fathered a nation — to sit still long enough to be rendered into immortality.

In 1941, Stuart’s work was housed at the newly opened National Gallery of Art in Washington, D.C. It was during that same year when another Great War appeared unavoidable. A German madman was bombing London and Liverpool and invading the Soviet Union and Greece. A Japanese emperor was on his own rampage in the Far East and the Pacific. Like most Americans, David Finley, the first director of the gallery who’d been instrumental in its founding, feared it was just a matter of time before the United States would be compelled into combat.

But what would become of the precious pieces of art in his stewardship? If London could be shelled and Buckingham Palace damaged, couldn’t the same happen to Washington? Finley had also heard about the Nazi Party’s looting of artwork from German-occupied countries — could such plunder visit this side of the Atlantic? He shuddered to think of Washington’s portrait pillaged to become the spoils of war. And not just that piece, but also Titian’s Venus with a Mirror. And Raphael’s Portrait of Bindo Altoviti. And one of Rembrandt’s self-portraits.

Finley could not run that risk. What he needed was a place to stash the collection for safekeeping, some place far outside of Washington. And he had to keep the whole undertaking under the public radar. Finley had an epiphany: His longtime friend, Edith Vanderbilt, and her late husband, George, had a palace in western North Carolina that would be ideal for his hidden treasure. The estate, built of brick and steel with a limestone veneer, was practically fireproof, and its remote mountain locale made for a good buffer.

He knew, too, that Edith Vanderbilt — a fashion-forward woman of cloche hats and wool suits — had an abiding appreciation for artistic expression, as had her husband. The Vanderbilts’ château is a fortress for the fine arts, exhibiting paintings by Pierre-Auguste Renoir, Claude Monet, and John Singer Sargent, and sculptures by Karl Bitter. Sixteenth-century Flemish tapestries garnish the walls, and a ceiling painting that once adorned the Pisani Palace in Italy, The Chariot of Aurora by Giovanni Antonio Pellegrini, lends a heavenly dimension to George Vanderbilt’s ample library.

Upon receiving the request, Vanderbilt, who no longer lived in the 250-room home, agreed to the plan. And she knew just where to put the art — in the music room. With its rough pine subflooring and unadorned brick walls, the room, for some reason, had never been finished. “It was just left as a bare-bones room, and they said it would be perfect,” says Darren Poupore, chief curator of the Biltmore Estate. 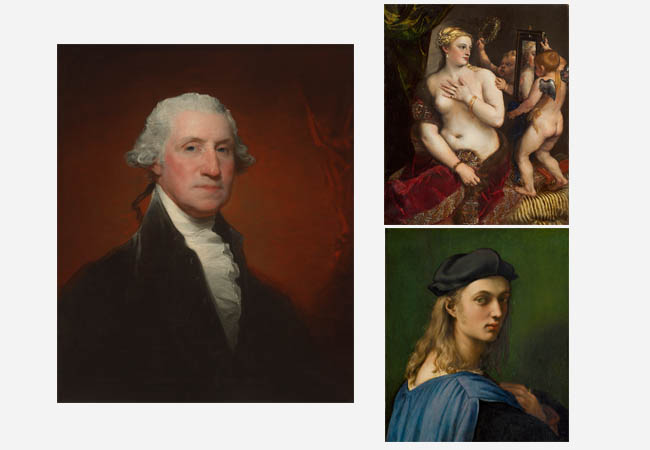 By now, the house had been open to the public for years, and maintaining the veil of secrecy had to be done with painstaking attention. To prepare the room, workers installed steel-vaulted doors in the archways and steel bars on the windows. Such austere doors in the refined confines of the Biltmore House would doubtless invite suspicion, so they were concealed behind draperies. Guests could walk by oblivious to the secret hideaway. Workers also equipped the room with fire extinguishers, fire alarms, and steel racks on which to hang the art.

The unsightly room that had been unfurnished for so long was now ready to house the finest artwork in America. But six months would pass before the first canvas and sculpture arrived. The Sunday morning bombing of a naval station in Hawaii, killing more than 2,000 Americans, would be the cue. “If Pearl Harbor could be attacked, it was not out of the realm of possibility that there could be an air raid on Washington, D.C.,” Poupore says.

Finley had to get moving. Three weeks later, 62 paintings — including the Washington portrait — and 17 sculptures from the National Gallery of Art were crated onto a train for the 450-mile trip through the foothills and mountains to Biltmore.

In January 1942, the artwork arrived in Asheville in the middle of a snowstorm, and then was loaded onto trucks for the final, nerve-racking ascent to the estate. The approach road was hilly, curvy, icy. In the deep winter cold, Finley was sweating. “He envisioned Raphael’s Alba Madonna falling and crashing,” Poupore says.

But every piece arrived unscathed. Pieces by Vermeer, Van Dyck, Goya, Rembrandt — millions of dollars’ worth of art. “It’s a Who’s Who; it’s your Art History 101 class,” Poupore says. “I would be jumping up and down to know that the Raphaels and the Vermeers were stored here. I mean, how incredible is that?”

The National Gallery of Art provided round-the-clock security with armed, uniformed guards, and Biltmore remained open to the public (though it was closed from 1943 to 1946 due to war rationing). But the public never caught on to all the goings-on; visitors just assumed the guards were employed by the estate. In an era without social media and 24/7 cable news, it was much easier to keep the scheme a secret.

As Biltmore fulfilled its wartime role as a refuge for the arts, an Army unit nicknamed the “Monuments Men” embarked on a similar mission on the battleground: recovering works of art looted by the Nazis in Europe. The Monuments, Fine Arts, and Archives program — MFAA — was established in 1943 to reclaim art and cultural property stolen by Hitler’s forces. Its work inspired the George Clooney-directed movie The Monuments Men, a comedy-drama film released in early 2014 that stars Clooney, Matt Damon, and Bill Murray. Poupore says the movie gives a mostly accurate portrayal of the men’s mission, and he applauds it for spotlighting an often-overlooked facet of the war.

Standing in the now-refurbished music room, with its gleaming oak floors, cavernous fireplace, Steinway piano, and woven tapestries, Poupore praises the deeds of the Monuments Men. He says they saved the beauty and identity — indeed, the soul — of Western society. “I think artwork represents our culture and our history, and it’s important to preserve that. And it’s also a reminder of why we were fighting — what are we fighting for?”

War is a hellish endeavor, and World War II was especially bloodthirsty: more than 400,000 Americans killed, millions of Jews annihilated, entire cities incinerated. The free world had never been so imperiled. In the face of all the human atrocities, saving works of art might seem a low-priority — if not downright trivial — pursuit. Things of beauty are still … things. Is it worth diverting manpower and risking lives to save Michelangelo’s Madonna and Child or the Van Eyck altarpiece? To walk through the National Gallery of Art or the Metropolitan Museum of Art — for that matter, to walk through Biltmore — the answer would be a resounding “yes.”

For community and country

Here in the Biltmore House 70 years later, visitors shuffle alongside the velvet rope in the music room, nearly all of them holding to their ears what appear to be cordless phones. They’re on an audio tour of the house, and a recording is offering them a brief account of the masterpieces hidden here when the world erupted in war. Considering Edith Vanderbilt’s devotion to western North Carolina — and to her country — it’s only fitting that she would offer her home for the war effort. Here was a woman who joined an array of civic groups, who campaigned for adult literacy, who was known to ride on horseback to deliver wool to mountain people.

Edith and George Vanderbilt didn’t spend their lives cloistered in grandeur; they embraced the world around them. They bankrolled a textile company, Biltmore Industries, which employed and clothed people in the region. They taught skills — weaving and woodworking, for example — to empower struggling families to support themselves. They donated milk from their massive dairy to local hospitals. “The Vanderbilt family did a lot of things for the community,” Poupore says. “They did it because it was the right thing to do, and they didn’t necessarily want the credit for it. They just did it.” 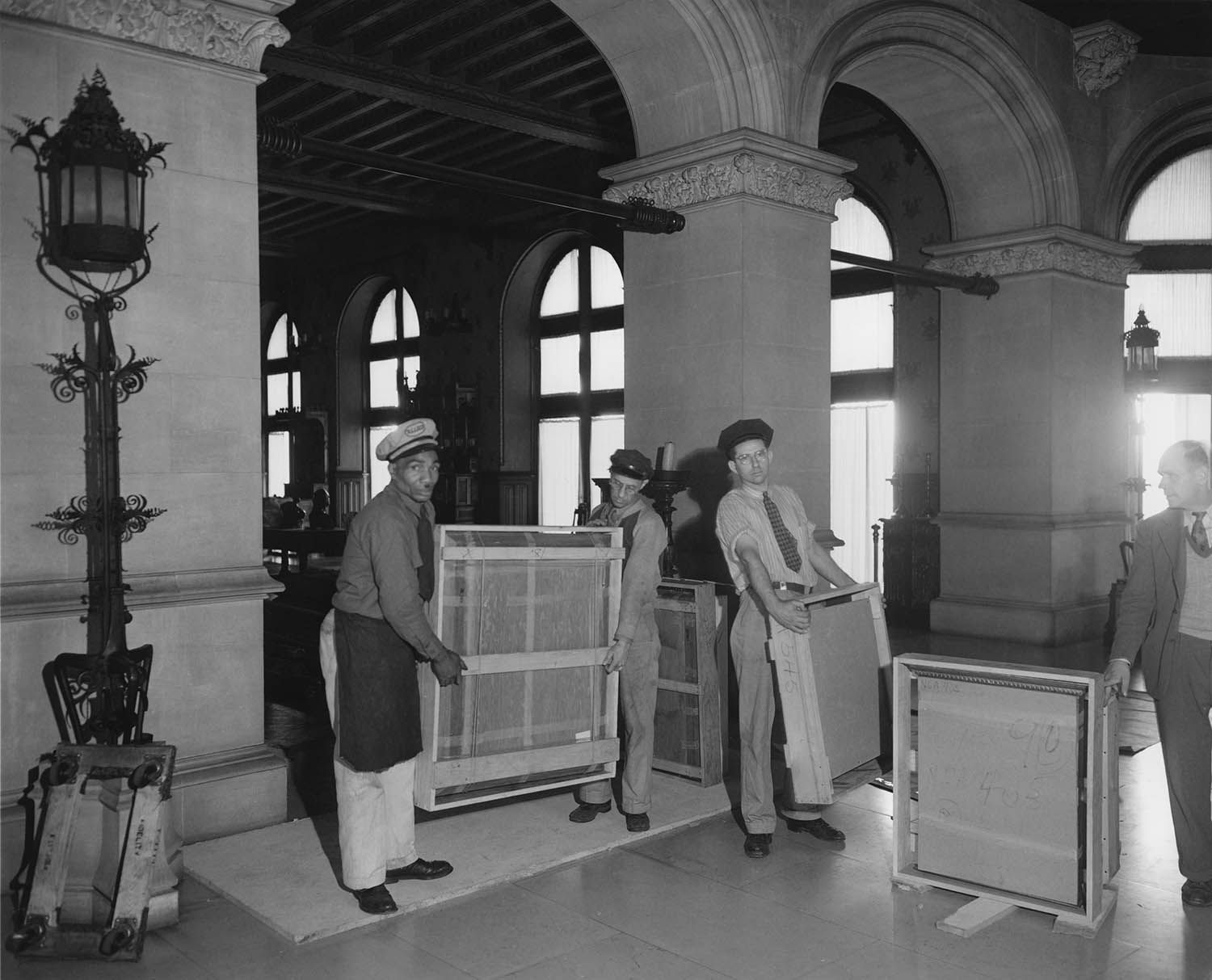 In 1944, when it became clear that works of art from the National Gallery were safe, they were removed from the Biltmore House and escorted back to Washington with a celebratory motorcade — a much more public journey than the top-secret one that had brought them to Asheville. photograph by Gallery Archives

The art remained at Biltmore until 1944, when the wartime threat had begun to wane. The National Gallery issued press releases and invited photographers to shoot the art being loaded onto moving vans for the return journey to Washington. The vans even had motorcycle escorts and sirens, blasting the news of this once-secret mission to the masses. In one of the vans, secured in a crate to be handled with exquisite care, a solemn face waited to see the light of day again.

We all know that face and its paternal gaze. It’s a visage sobered by the responsibility of tending to a great nation. Simultaneously stern and soft, the face is a ubiquitous presence, as if watching to make sure the country he fathered doesn’t lose its moorings. To see Washington’s regal image on an artist’s canvas — or to see the stupendous work of art that is the Biltmore Estate — is to know we’re not just a nation of wits and weapons, but also one of beauty.

A beauty that deserves our protection.

A beauty worth fighting for.