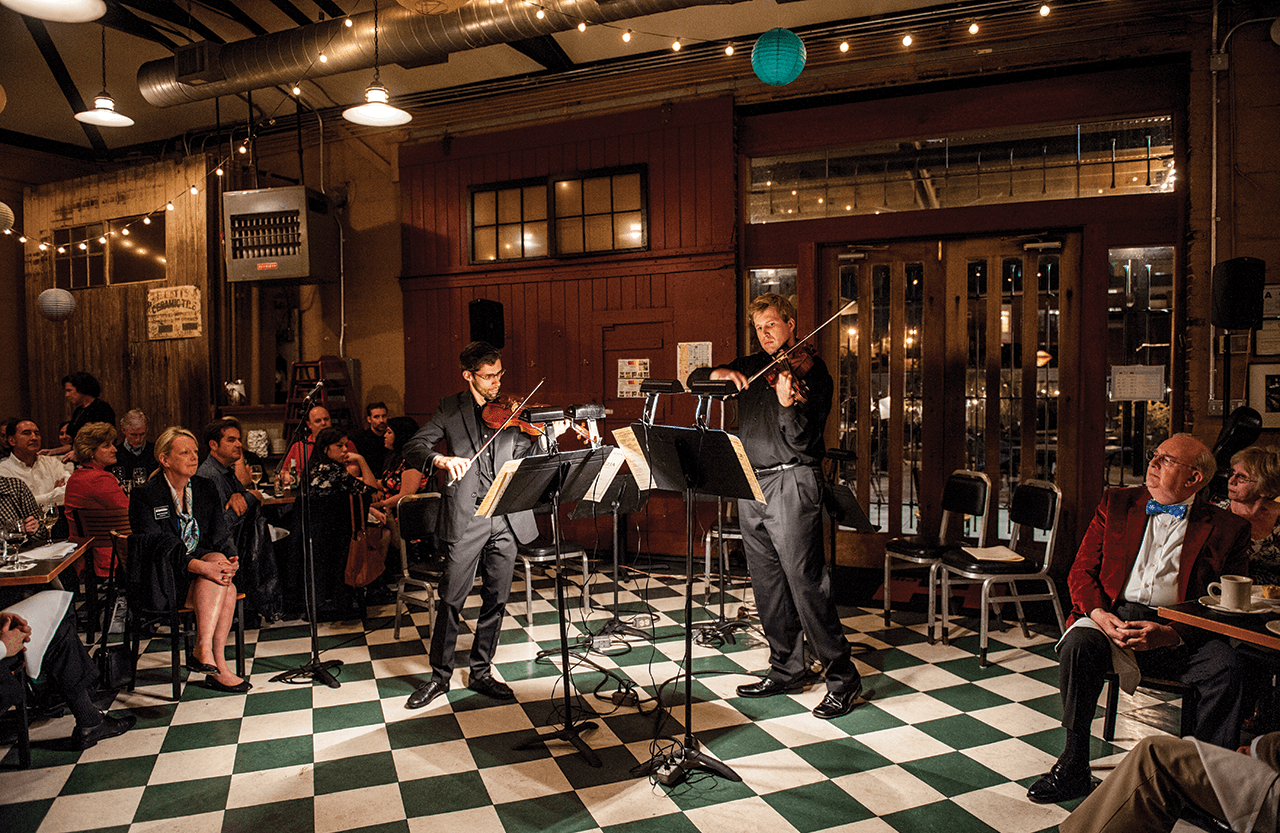 Seated at one end of the table is a French-born businessman who’s sipping a glass of Meiomi Pinot Noir. His robust French accent adds a certain suaveness to the setting. On the other side of the table, sitting next to me, is a 19-year-old music student at Wake Technical Community College. Jasmine Axelrod has a paper due tomorrow about this dining experience with the North Carolina Symphony.

She’s here with her 21-year-old sister, Monica, and their father, Bill. When the host seated me at this table, with seven people I had never met before, I felt that familiar twinge of self-consciousness — or just plain shyness — set in. As extroverted as I think myself to be, I have always harbored a secret desire for privacy at a restaurant. So this experience is giving me a good elbow jab out of my comfort zone.

Of course, I’ve gone to restaurants and bars to listen to rock and country, blues and jazz, mariachi bands and dueling pianos, but never to hear Mozart or Halvorsen. As a beer and rock ’n’ roll kind of guy, the list of 27 red wines and 13 whites looks intimidating; the musical program, with words like menuetto and adagio ma non troppo, sounds out of my intellectual range.

Ironically, the venue is a restaurant called Humble Pie, located in downtown Raleigh’s arts and warehouse district. It’s the sort of place that has a tiki bar and a patio and a menu that lists prices without the dollar signs. A thoroughly modern place. To prepare for this event, the N.C. Symphony’s Soundbites at the Pub, I perused the symphony’s website. It trumpets the outing with glossy phrases: “Delicious local food. Hip atmosphere. Amazing music.”

It mentions nothing about being a black-tie affair, so with black jeans and a black leather jacket, I stride across Harrington Street, feeling reasonably trendy among the men in sport coats and the women in tall leather boots. It’s a baby boomerish crowd, but there’s also a music class of 20-year-olds here from Wayne Community College in Goldsboro, who will be blogging about the event.

A menu for Mozart

The Frenchman at my table is Hugues “Hugh” Lefebvre, here with his wife, Annette. Before moving to Raleigh a decade ago, they lived in Paris; New York; Phoenix; and Washington, D.C. They’re joined by two friends, Jim and Wynn Dorsett, both Raleigh natives. As an icebreaker, I announce that I’m new to this concept of a symphony concert in a restaurant. I ask what they find so … appetizing … about it. Jim responds with words like “cozy” and “casual.”

“You can hear it so much more clearly,” he says of the music. “But you can feel it, too. And you can see what the performers are doing and how they’re playing off each other.”

I glance over the three-course menu. For an appetizer, there’s a choice of chicken liver pâté on toast, a bibb salad, or cauliflower soup. The main courses are ricotta gnocchi, shrimp and grits, or Painted Hills tri-tip. And for dessert: rum raisin bread pudding or chocolate and almond cake.

The music begins as dessert is served. Two men, each dressed in black, each tucking a stringed instrument under his chin, begin to play Johan Halvorsen’s Passacaglia from Handel’s Suite No. 7. The passacaglia is an interlude between instrumentally accompanied dances and songs, a form of baroque music said to have originated in Spain in the early 1600s. I sit there transfixed, feeling like nobility, watching bows flit across strings. When the piece is over, there’s vigorous applause. Associate Concertmaster Dovid Friedlander, a violinist, says, in an understated way, “Well, that was that,” and the restaurant crowd erupts in laughter.

And then, five musicians — two women, three men, all decked out in black — take their seats before their sheet music stands, each page white-hot beneath a mounted lamp. Two of them play violins, two play violas, and one plays the cello. They perform four versions of Mozart’s String Quintet No. 4 in G minor. I look around the room. Faces in the far recesses of the restaurant are blotted out by the dim light. Everyone is still, attention rapt, dessert uneaten, wine untouched. A woman, her eyes closed, is faintly smiling, as if in meditation. All of us feel it: the euphoria that comes when you’re witness to an exquisite performance, the kind that rises from the blissful mix of great food, great drink, and great music. 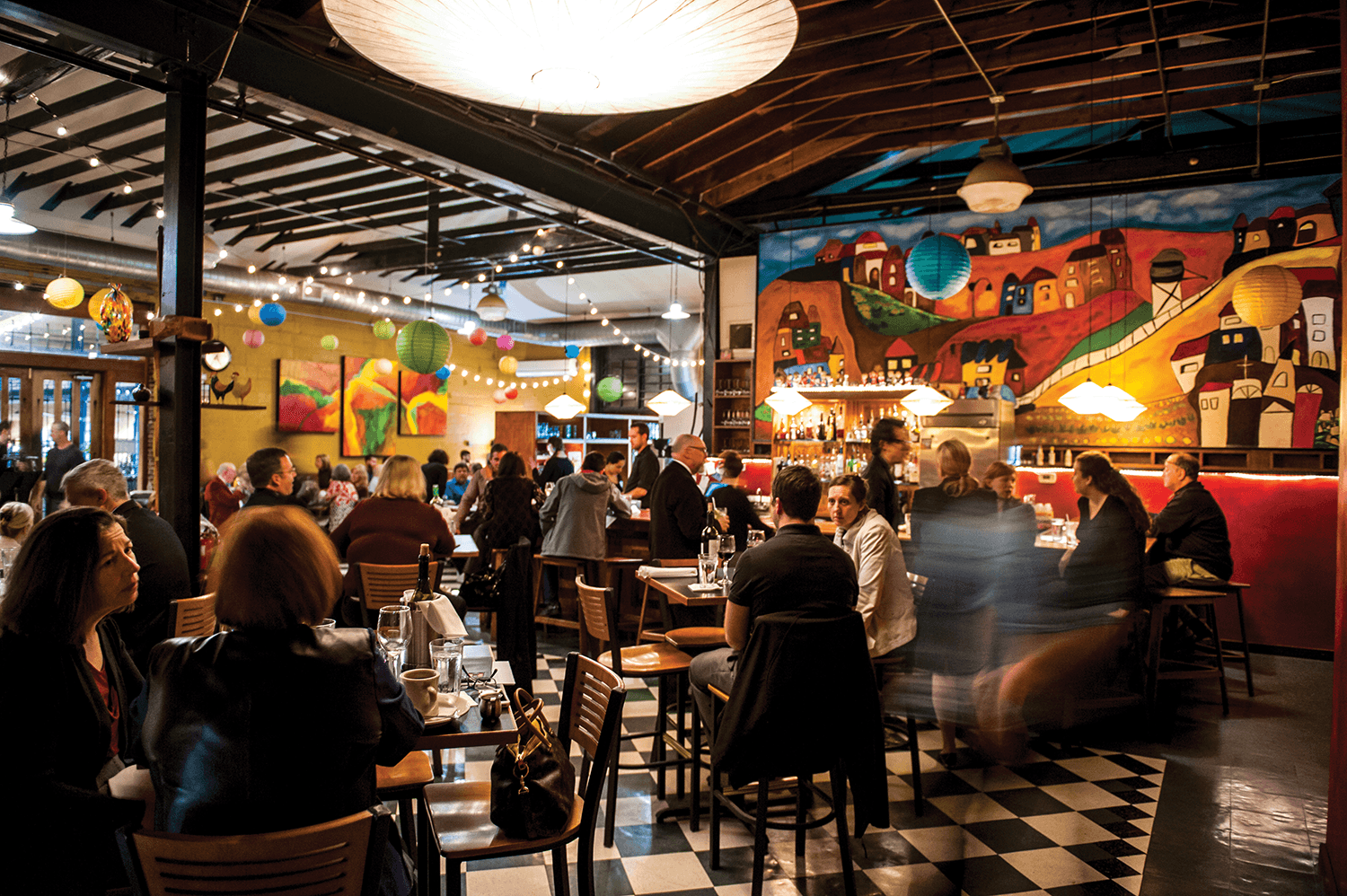 The N.C. Symphony began the Soundbites at the Pub series in 2008, performing at restaurants across the Triangle. “This is a great chance for our symphony musicians to perform music in an intimate setting, and to reach out to new audiences,” says Joe Newberry, director of communications for the symphony. The musicians themselves choose the pieces, with one of the performers introducing the music. That way, “the audience can hear why each piece was selected, and what it means to the artists involved,” Newberry says.

After the musicians take their bows and the audience rises for a standing ovation, I seek out Friedlander. Though we associate classical music with cavernous concert halls, he says, the pieces were originally written for settings like this one. “This is not too far from what they did during their time,” he says. “When Mozart walked in, he’d feel real comfortable sitting down at the bar.”

It’s the intimacy of the venue, the up-close, floor-level connection with the audience, that energizes Friedlander. “When you’re onstage, sometimes you feel a little bit of a disconnect because you’re farther away,” he says. “I like the fact that it’s more laid-back. People can eat a dessert, have a drink, relax, and watch the music. Chamber music, really, in its time, was like that.”

By night’s end, my self-consciousness has long worn off, and I feel a connection, a friendship, with everyone at my table — people I had never met before. It did feel like “a perfect night out with friends,” as the symphony’s website so invitingly puts it.

And no longer does the symphony seem so distant and august. It’s made up of youthful people who have Twitter handles and with whom you can sit down and have a beer. Their talent makes centuries-old music not only relevant, but also cool. It’s music both soaring and smooth, stimulating and soothing — music still powerful enough to pack them in at the pub.