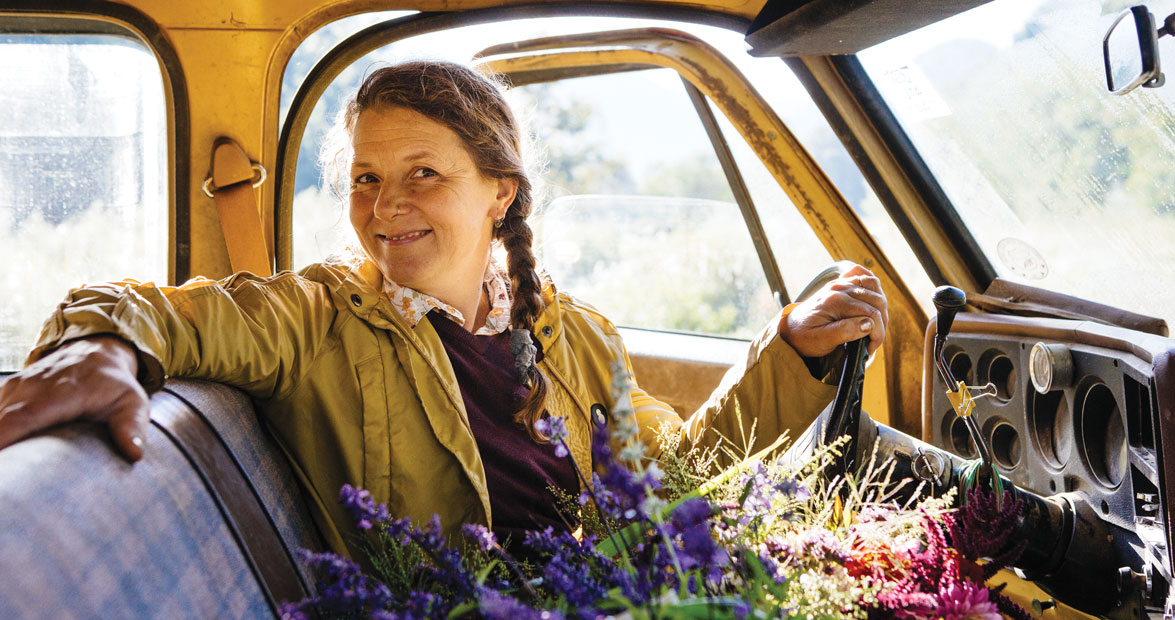 Arriving at Flying Cloud Farm feels a bit like entering the pages of a storybook. Hemmed in by mountains around Fairview are fields of flowers stretching as far as the eye can see, from the daintiest pale pink cosmos to bright orange zinnias. A Massy Ferguson tractor and an old, sunshine-yellow Chevy Suburban with blotches of rust stand sentry, and at the door of a hand-hewn log house, a kindly grandpa with a British accent greets you.

His daughter Annie Louise Perkinson and her husband, Isaiah, manage this small family farm growing organic strawberries, blueberries, blackberries, sweet potatoes, vegetables, and flowers on about 20 acres. It’s the last expanse of valley farmland before U.S. Highway 74A winds its way up and over to the Eastern Continental Divide and down into Hickory Nut Gorge.

Annie Louise was born in London but grew up on this land. Her mother grew up here, too, on a dairy farm called Hickory Nut Gap. The grounds that now spring forth with berries and flowers were once hayfields. “Our family has been here for 100 years,” Annie Louise says.

Her mother left home as a young woman to pursue her interests in art and philosophy at a Christian retreat in Switzerland. There, she met an Englishman, Will Hamilton, to whom she said “I do” in 1972. But she could only stay in Europe for so long — her mountain home in Fairview exerted a relentless pull. “I realized how much her family and this area meant to her, so I decided to see if it was feasible to come here,” Will says, “and it was.” 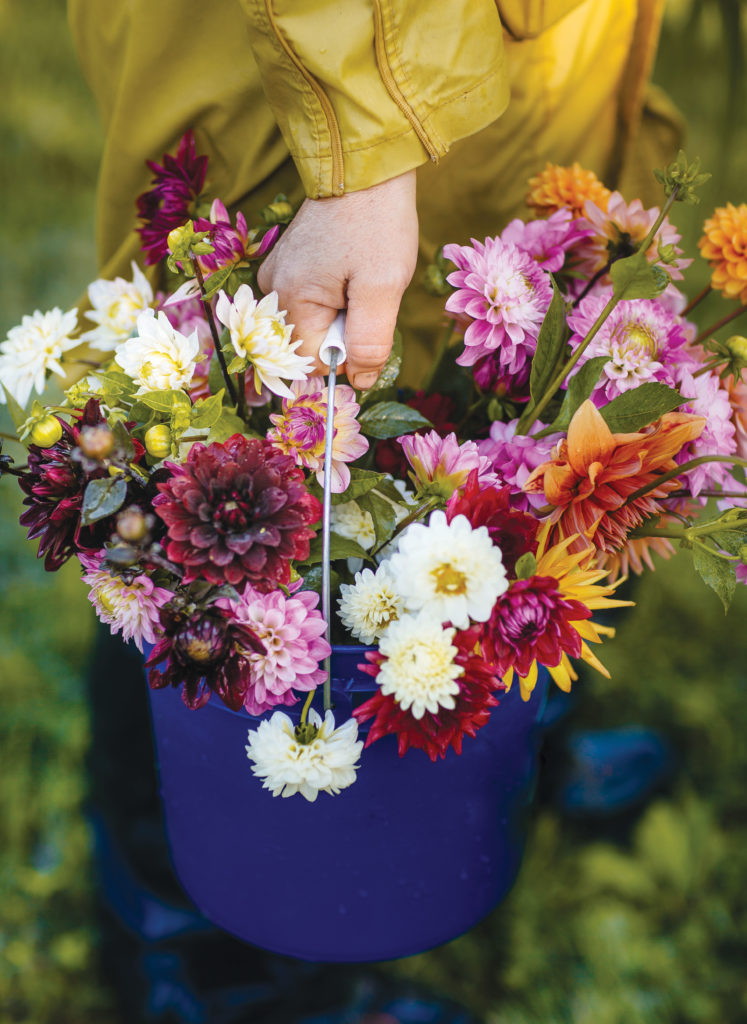 Whether you need flowers for your wedding or the kitchen table, Isaiah and Annie Louise provide buckets to fill with fresh blooms. photograph by Tim Robison

In the late ’70s, Will and Susie moved their family to Fairview and into a 1937 farmhouse just down the road from where Susie had been raised. Eventually, their daughter Annie Louise went off to UNC Chapel Hill, where she met Isaiah. During college, she took a gap year and traveled to Europe, where she worked on farms in England and Germany. She appreciated the way farmers sold their products straight to the community — and a seed was planted. “I realized we had an opportunity here,” Annie Louise says.

In 1996, she and Isaiah were married and settled into a cabin, built in 1927, behind her parents’ house in Fairview. Three years later, they harvested their first batch of blueberries, grown on just half an acre.

As the years passed, they rented more land from family and neighbors, began growing different crops, raised two daughters (now 16 and 20), and became full-time farmers. They named their venture “Flying Cloud” after the stagecoach that once traveled what is now U.S. 74A and stopped at the historic Sherrill’s Inn, which Annie Louise’s great-grandparents bought in 1916.

Farming once seemed to Annie Louise an unlikely profession, but today, it’s impossible for her to imagine her life without Flying Cloud. “It’s pretty awesome to see things grow, to live seasonally, and to experience the cyclical nature of the farm,” she says as she wanders among pots of sprouting kale, parsley, and onions in her greenhouse. “It’s nice to feel like we’re nourishing people and preserving land.”

In warmer months, the Perkinsons’ fields abound with berries, veggies, and bucketloads of flowers. Flying Cloud is a floral wonderland from spring through fall, its soil bursting with daisies, dahlias, sunflowers, marigolds, and zinnias. And even the flowers connect back to family history: The seeds that bloom into Annie Louise’s cheerful red poppies come from flowers that her great-grandmother once planted.

From July through October, you can visit the farm to pick your own bouquets by the bucket;the blooms are especially popular for weddings. The farm also has a self-serve roadside produce stand.

Listening to classical music as she plants flower seeds in pots, farmer and crew manager Carla Padvoiskis is perfectly content. “I find it really challenging and rewarding to be part of something where I have to put my ego aside,” she says. “Taking care of other living things — it makes you feel part of a bigger system.”

It might not actually be a fairy tale, but at Flying Cloud, there are still sweet lessons to be learned among the flowers, where family and tradition are nurtured, and beauty is coaxed out of the dirt.