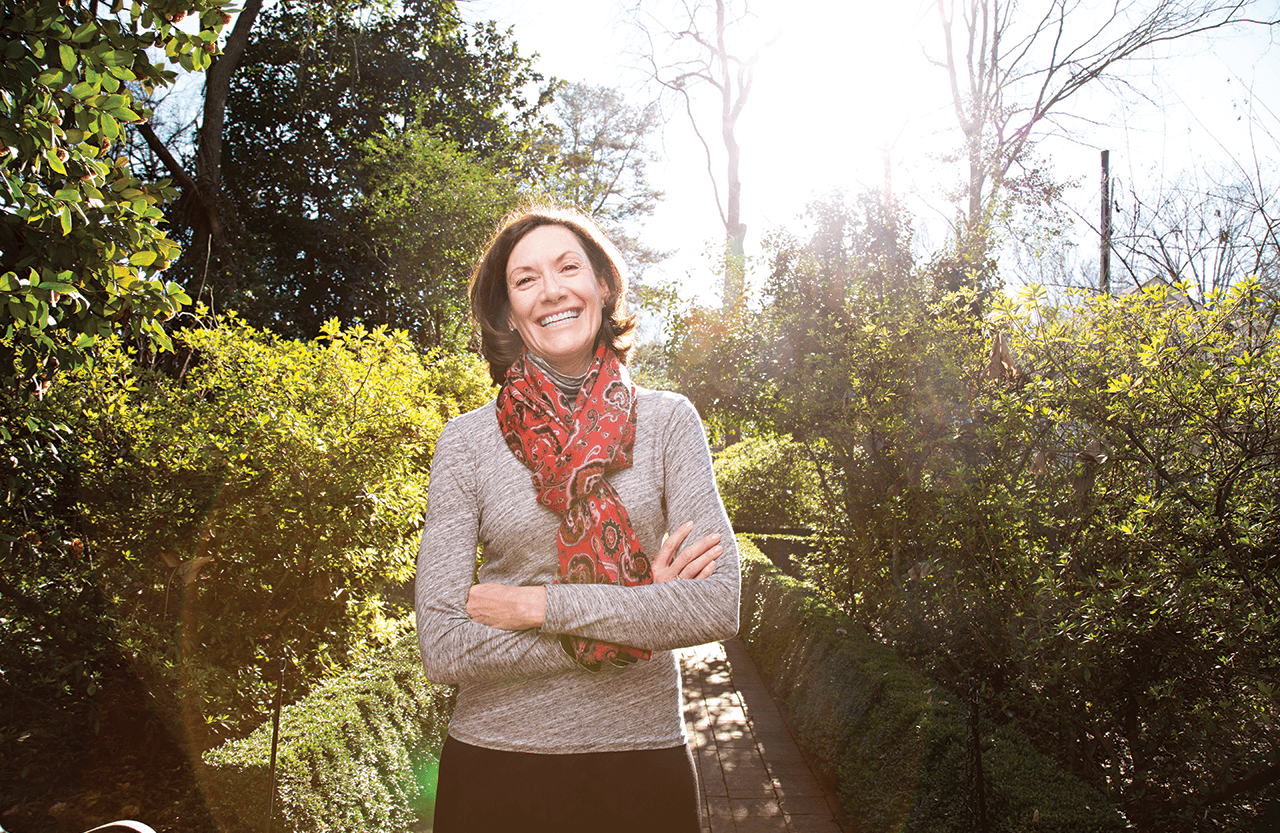 Somewhere in all that blueness, far above the highest poplar leaf, a plane thunders toward Charlotte-Douglas International Airport. The distant din of jet propulsion is part of the Wing Haven daily soundtrack, much like a cawing crow or a scampering squirrel. But the roar intrudes hardly at all. This urban Eden is so absorbing, so stimulating to the senses and the psyche, that a Boeing 737 fails to hijack your attention.

What commands my attention now is a fountain that sounds as soothing as a mountain spring. Water arcs out of a sculpted lion’s head, splashing into a small pool. I’m walking — dawdling, really — along a brick path bordered by glossy cast-iron plants and shaded by magnolias, wild cherry trees, black gums, and hemlocks. The midafternoon sun sends bright shards through the canopy, scattering the ground with needle points of light.

I’m only three and a half miles south of uptown Charlotte, but this setting taps into my inner Thoreau. I could laze away the afternoon on one of these benches, unplugged and unneeded, with nothing more pressing to do than look for cardinals, listen to chickadees, and meditate on high ideals.

“There are lots of little places, if you get off by yourself, to reflect and find that place of peace,” says Barrett Ranson, the executive director of Wing Haven Gardens & Bird Sanctuary, a horticultural jewel within view of Charlotte’s glittering skyline. Here, you’re reminded that the air doesn’t just belong to skyscrapers and silver wings with roaring engines; it belongs to the winged creatures that serenade us from oak limbs.

The garden, spreading behind a two-story white house on Ridgewood Avenue in the Myers Park neighborhood, is three acres of solitude enclosed with lattice brick walls that allow passersby to peep in. Keeping this sanctuary natural has required human hands. Invasive nonnative species, such as sprawling English ivy and spiraling wisteria, were planted decades ago, and proliferated. But the garden’s curator, Ben Fletcher, is working to extract the exotics and let the natives rule the roost.

Fletcher, a 34-year-old native of Louisiana, has degrees in landscape architecture and business management from the University of Georgia. On this warm, sun-gilded day, he’s walking around in tan cargo pants with orange clippers poking out of a pocket. He knows the science of the sanctuary — the plant nomenclature, the difference between perennials and biennials — but he also knows the poetry of the place. I pause with him on the eastern edge of the garden, among azaleas and a buttonbush tree, where the trickle of water encourages hushed tones. “This is kind of a special area for me,” Fletcher says. “It just feels right to me — the sound of the water. It’s still, calm.” 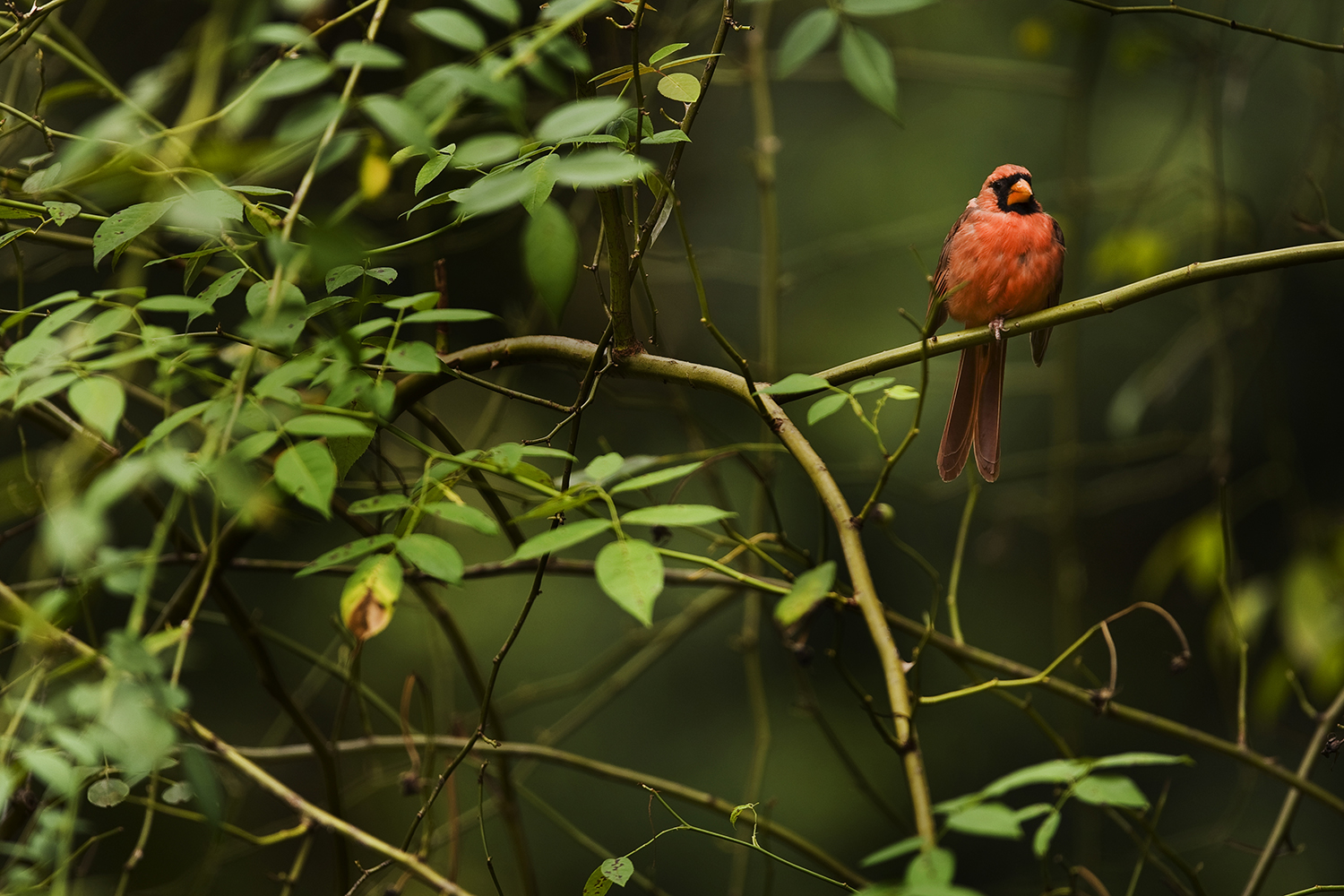 We stand there, feeling no pressure to keep up the conversation, letting the woods and water fill the silence. “The sound of that water is just enough,” Fletcher eventually says, “is just quiet enough to be heard but not too loud to drown out everything else.”

It’s good to have someone like Fletcher alongside to dispense expert observations and answer those how-does-your-garden-grow questions. He points out the hydrangeas, the fetterbush, the musclewood tree with its sinewy branches, and articulates the mystique of the garden: “It’s more a feeling than a description.”

The garden germinated from two lovebirds who met in Boston in the early 1920s. Edwin Clarkson was a real estate developer from a prominent Charlotte family. Elizabeth Barnhill was a passionate gardener from Uvalde, Texas, who’d gone to Boston to attend the New England Conservatory of Music to become a concert pianist. Growing up in Texas, she watched her mother prune roses and scatter larkspur and poppy seeds on the roadsides. She raised white doves, squirrels, a raccoon, a pig. No matter where her musical career carried her, Elizabeth knew she would always have a garden at home.

Edwin and Elizabeth spent five years roaming and romancing before Eddie’s father admonished him, telling him not to let “that pretty little auburn-haired girl get away.” The two became engaged and planned to settle in Charlotte. In the months before exchanging vows, Elizabeth mailed letter after letter to Edwin, each containing detailed sketches and building instructions for their house. It would be a two-story affair with a raised brick terrace off the living room so she could move the piano outside for garden parties. The rooms would have large windows, to draw the outdoors in.

The wedding took place in 1927, and when the Clarksons arrived in Charlotte after honeymooning, Elizabeth insisted on going straight to the home she’d only seen in her mind’s eye. As they pulled up, she was astonished to find the house surrounded by a red clay lot with no greenery save for a few pine saplings and a spindly willow oak. Yes, the house met her expectations, but looked forlorn without the botanical backdrop of her imagination.

Since Edwin didn’t have a key, they had to climb in through a window to survey the interior. Elizabeth’s heart fluttered at the sight of her wedding present — a mahogany Steinway baby grand piano. But it provided only a short-lived diversion from the lifelessness outside; the very next day, she began digging, tilling, and planting.

Like the house, Elizabeth designed the garden herself. She laid it out around a cross of intersecting paths that run the entire property, each one ending at a fountain or statue. But in 1930, she was diagnosed with undulant fever and became bedridden for a time. As she gazed out of her bedroom window, or from a cot in the garden, she became enthralled with the robins and the mockingbirds, the woodpeckers and the waxwings, flitting about. She made the decision to dedicate the garden to them, prompting the addition of birdbaths, feeders, and plants — hollies and crab apples, for example — whose fruit birds love.

The Clarksons gave the gardens to the Wing Haven Foundation, which they created, in 1970. The foundation is charged with maintaining the acreage the way the couple desired, and allowing the rest of us to savor its serenity. Elizabeth died in 1988; Edwin died five years later. In 2008, Wing Haven acquired another house and one-acre garden that had belonged to Elizabeth Lawrence, a short walk away on Ridgewood Avenue. Lawrence was a distinguished plantswoman and garden writer who penned hundreds of columns for the Charlotte Observer about the joys of gardening. She moved to Charlotte from Raleigh in 1948 and, like her neighbor down the street, designed her house and garden herself. It, too, has brick paths, a pool, and a profusion of flowers.

I’m alone now, shuffling along the paths behind the Clarkson home, thankful for the little wooden signs carved with names of trees and shrubs. Buckeye. Blackgum. Pawpaw. Hercules’ Club. Deep in the shade of hemlocks and basswood along the garden’s rear wall, the trail passes a Madonna and Child sculpture with a stream of water trickling into a birdbath. Elsewhere, I stop to read a plaque etched with a prayer from Toyohiko Kagawa, a Japanese Christian pacifist:

I want to be keenly interested in everything, with mind and muscle ever alert, forgetting my troubles in the next moment.

I do my best to ignore the vibrations of my phone, to become fully engrossed in this place. Instead of a to-do list, I focus on the marvelous life around me: wildflowers and herbs, chipmunks and squirrels darting across the trails, tulip poplars spreading their splendid crowns against the sky. At more than 100 feet tall, six feet in diameter, and with an opening in its trunk large enough for a man to scrunch into, one poplar is considered the largest in Charlotte. And just behind the Clarkson house, with a labyrinth of limbs woven like a web over the brick patio, is a Vitex tree, one of the largest in the country. Come spring, it’s covered with periwinkle-blue flowers.

I stroll past an oval pool with a bullfrog perched on its rim. I wander through the children’s garden, and linger by a long-unused fireplace along the garden’s back wall. Somewhere beyond the wall, a fire truck wails. Horns honk. They’re familiar notes in the daily soundtrack of North Carolina’s largest city. But the noise soon drifts away like a dogwood petal in the spring breeze. Wing Haven is so much more than a bird sanctuary. In our media-immersed world, where tweeting is associated not with birdsong, but with 140 characters, Elizabeth Clarkson’s vision brings us down to earth to stop, smell the flowers, and unplug.