Whenever I need a reminder of the way salt marsh leans with the wind, like successive waves in the ocean, or how the first rays of sunrise bring an inexplicable chill no matter how many layers I wear, I glance to my left and find the Canada goose decoy that resides on a bookshelf in my office. It’s an unusual piece of work. Crafted by a Wanchese carver named Nick Sapone, the goose sports a wooden head, but a body made of fabric stretched over a wire frame. There are examples of these so-called canvas decoys from other regions, but the style is perhaps best known from North Carolina’s Currituck Sound. There, old decoy makers used whatever they had around the shop: wire, old sailcloth, paint. From such utilitarian materials, they built decoys that did a fine job attracting waterfowl — and, ultimately, decoy collectors. 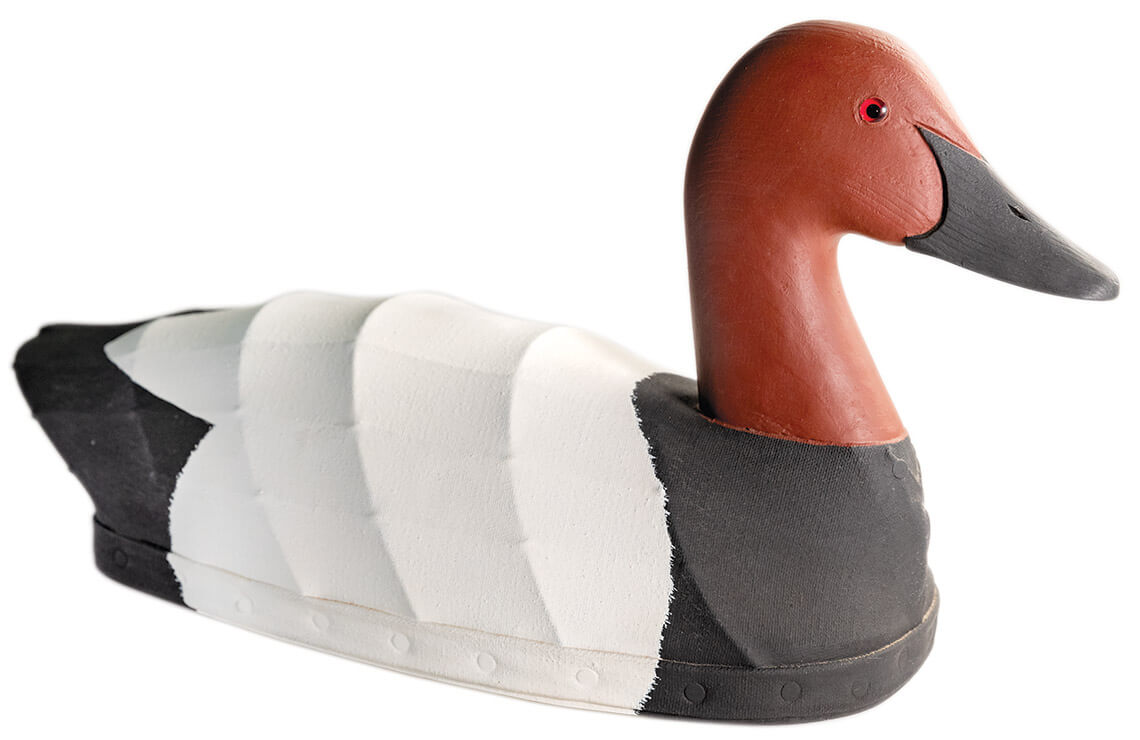 A canvasback decoy by Nick Sapone. photograph by Charles Harris

That Nick Sapone goose is entirely of a place: I catch a glimpse, and it speaks to me of a singular corner of North Carolina. It’s a beautiful decoy. Sapone, who was once invited to demonstrate his craft at the Smithsonian Institution, knows his stuff. And I can appreciate art for art’s sake. But that’s not what I see when I study that canvas-clad goose. I see moonlight on ice as the skiff breaks through the frozen Currituck Sound. I see swans like pearl necklaces in a deep blue sky. I smell wet retrievers.

That’s the beauty of hand-carved decoys. Whether they sit on a shelf or ride the chop of a windy lake shore, they are designed and built to turn heads. But they’re just as good at turning back a few pages of time.

I am not a decoy collector, not in the traditional sense of accumulating the works of well-known carvers to display in fine cabinetry. I’ve picked up decoys by traveling and hunting from there to yonder, often with the carvers themselves. For me, the value of a historic decoy — or even a modern one made in the old-school ways — isn’t determined by how it holds its worth in the decoy market. My appraisal system is a little different: How does this black duck decoy, or that canvasback, remind me of a day spent in the marsh or swamp? What is it about the way this decoy rides in the water that brings to mind a Pamlico Sound sunrise?

I love the way an old, battle-worn decoy can still inspire me to drag myself out of bed at 4 a.m. and lug a canoe through the woods and be ready by the beaver dam when the ducks show at dawn. That’s a part of my value analysis. When I see an old decoy, does it inspire me to keep chasing ducks? 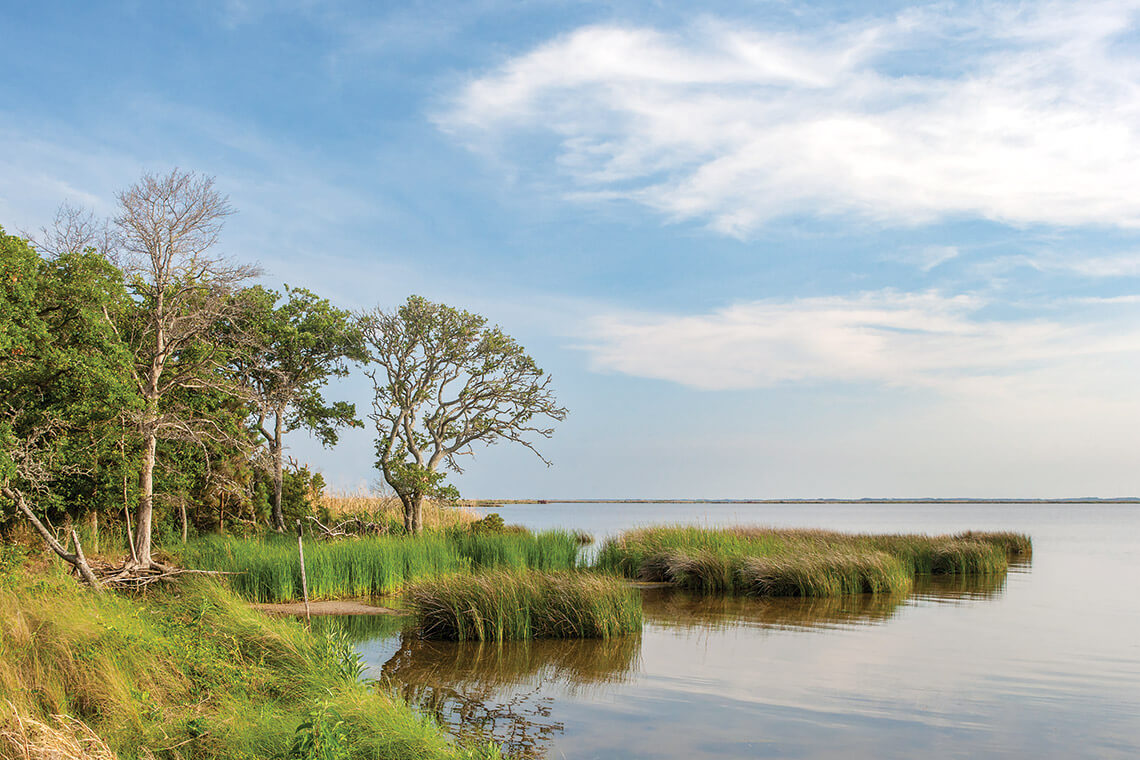 Nick Sapone crafts his Canada geese and other decoys with canvas bodies, a style perhaps most associated with carvers from the Currituck Sound area. photograph by Mark Buckler

From my office chair, in fact, I can look out over some of the most lauded natural landscapes of the North Carolina coast. In Sapone’s decoys, with their otherworldly lightness and metal framework like a ribcage, I can see the shallows of a Currituck Sound grass bed, the choppy waters and the wind-driven spume in lacy tendrils on the water.

A Jerry Talton teal rides atop my current crop of books to read. Talton lives near Swansboro, and when I see the lines on his traditional Core Sound working decoys, I remember what a tough day it was in the marsh, Talton and I breaking through hundreds of yards of muck and chest-high reeds. But the sight of the sun coming up behind half a dozen of his hand-carved birds floating in a marsh pond will stick with me longer than the memory of striking out on the real thing.

Near my desk is a tiny Canada goose carved by Julian Hamilton Jr., whom I interviewed on his porch in Beaufort 30 years ago. Hamilton was an incredible breeder of waterfowl, and he tended to scores of ducks, geese, pheasants, guinea fowl, and turkeys in his backyard a few blocks from the water. For him, a decoy’s value wasn’t measured in the intricacy of a single feather, but in the realism that it portrayed by shape and size and its attitude in the water. By its “duckiness,” so to speak, which he studied daily in his backyard.

There’s another goose over by the small table where I keep a printer. This one was carved along the shores of Chesapeake Bay, where the famed Susquehanna Flats has called to hunters across the centuries. I was in the shop when Charles Jobes finished the bird, and when I run my hand across its smoothed back, I can feel in my bones the last morning we hunted together, when an overnight low of 12 degrees put the ducks and geese on the move.

On one level, I suppose, a traditional hand-carved decoy is worth whatever someone will pay for it. But all of these experiences go into my calculations of a decoy’s worth, and it doesn’t have a lot to do with dollars and cents. Or even sense. 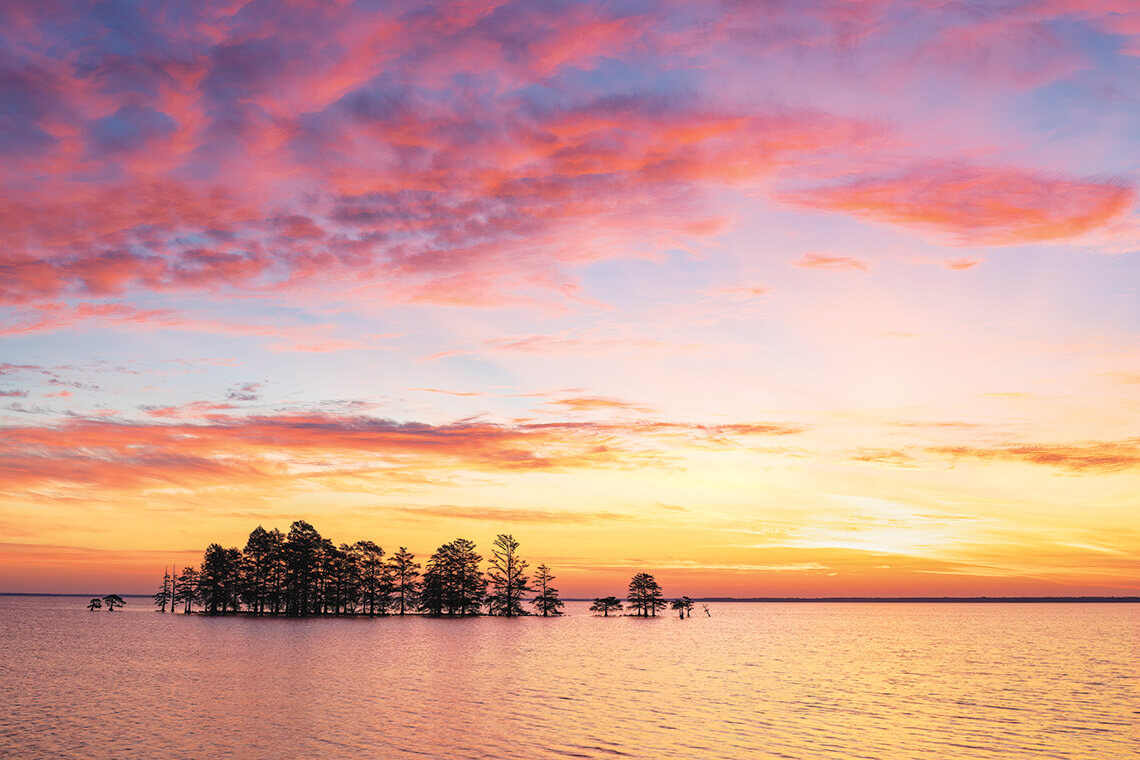 The author’s collection of decoys remind him of early morning hunts in scenic places like Lake Mattamuskeet. photograph by DAN WATERS/DLWATERS.COM

There’s another Nick Sapone decoy in my office — a canvasback duck — and every time I see it, I also see a great V of canvasbacks winging over the causeway at Lake Mattamuskeet. Nearby hangs a group of four scaup decoys made from crab pot floats. Old-timers like carver Ron Wade Sr. of Knotts Island have long called scaup “blackheads,” which makes sense once you see these handsome birds on the water, dressed in their formal tuxedos. Wade was the longtime head guide for the Swan Island Club in Currituck Sound, where I met him for the first time 30 years ago. Those decoys have been in my office ever since.

They may not be called up for duck swamp duty again, but that doesn’t mean they’ve retired entirely. They still have a job to do: Help my imagination soar over distant waters, and keep my memories of long-ago dawns as sharp as the feel of sleet on a half-frozen cheek.