The mural is the first thing that draws the eye: a brown-skinned woman with a knowing look, surrounded by lively images of her singing. In this alleyway turned performance space off Market Street in Mount Airy, Greensboro-based graffiti artist Jeks has captured jazz singer Melva Houston’s dynamic energy in a hyperrealistic mural. After Houston’s death in May 2020, friends and family were looking for a way to honor the singer, resulting in the mural at Thirsty Souls Community Brewing, where she performed weekly until her health failed. Soon after its grand opening in October 2021, the small outdoor music venue known as Melva’s Alley became an anchor in downtown’s nascent arts district. 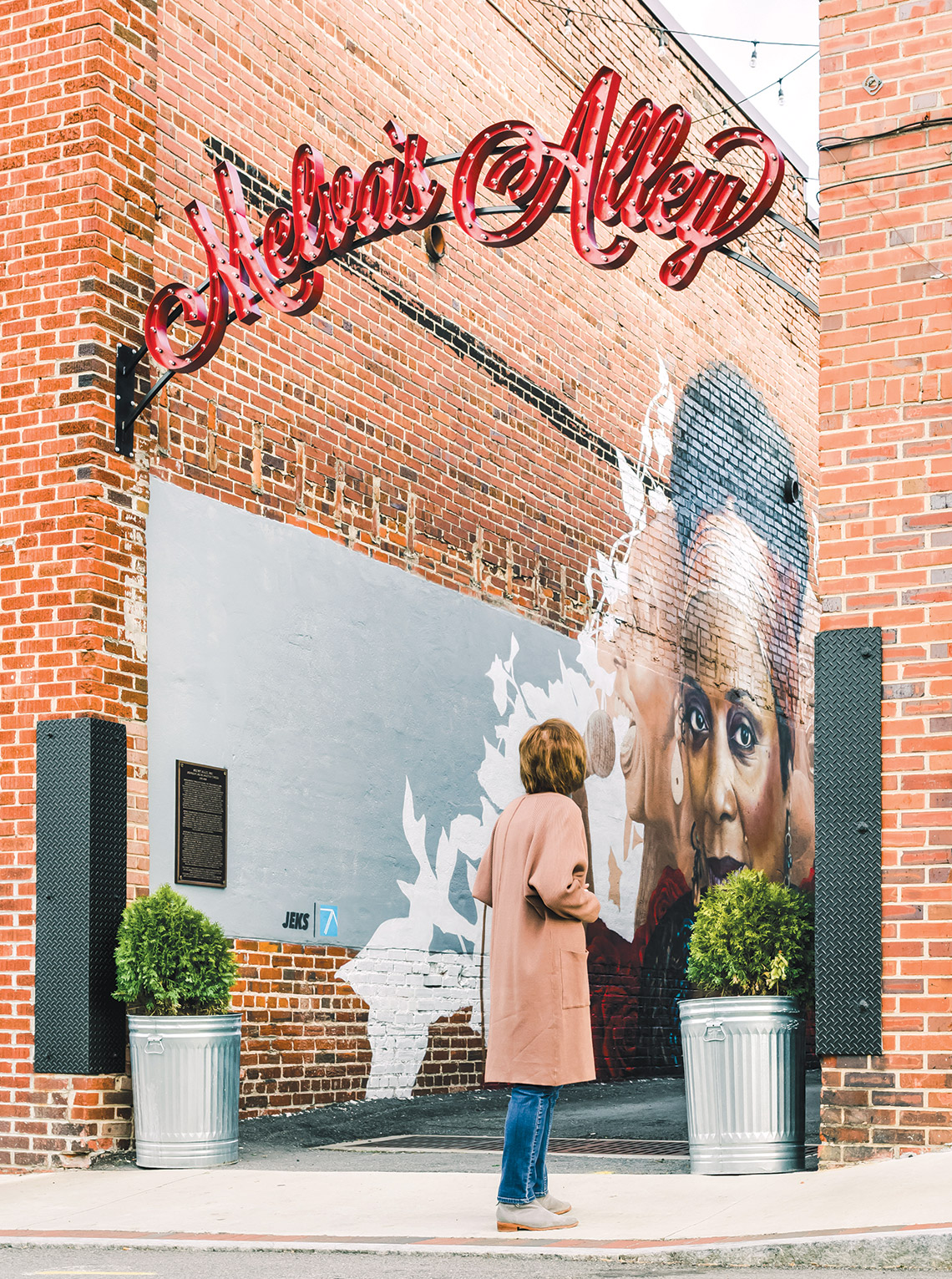 The mural of Melva Houston is located down Melva’s Alley next to Thirsty Souls Community Brewing. photograph by KIARA HARRIS

Houston was born in Memphis, Tennessee, and her inimitable alto shines on backup for Stax Records artists like Isaac Hayes and Otis Redding. She later relocated to Mount Airy and quickly built up a fan base, performing with Greensboro’s Gate City Divas and at the John Coltrane International Jazz and Blues Festival and the Carolina Blues Festival. Though she continued to record and tour internationally, she called North Carolina home for 40 years.

In the mural, a wreath of flowers graces Houston’s shoulders — the community literally giving her roses. A small performance area hosts concerts by North Carolina bands like Aquarius Moon and The Bob Sanger Quintet. Houston may be gone, but Melva’s Alley ensures that her influence in the arts continues to be heard. — Emiene Wright 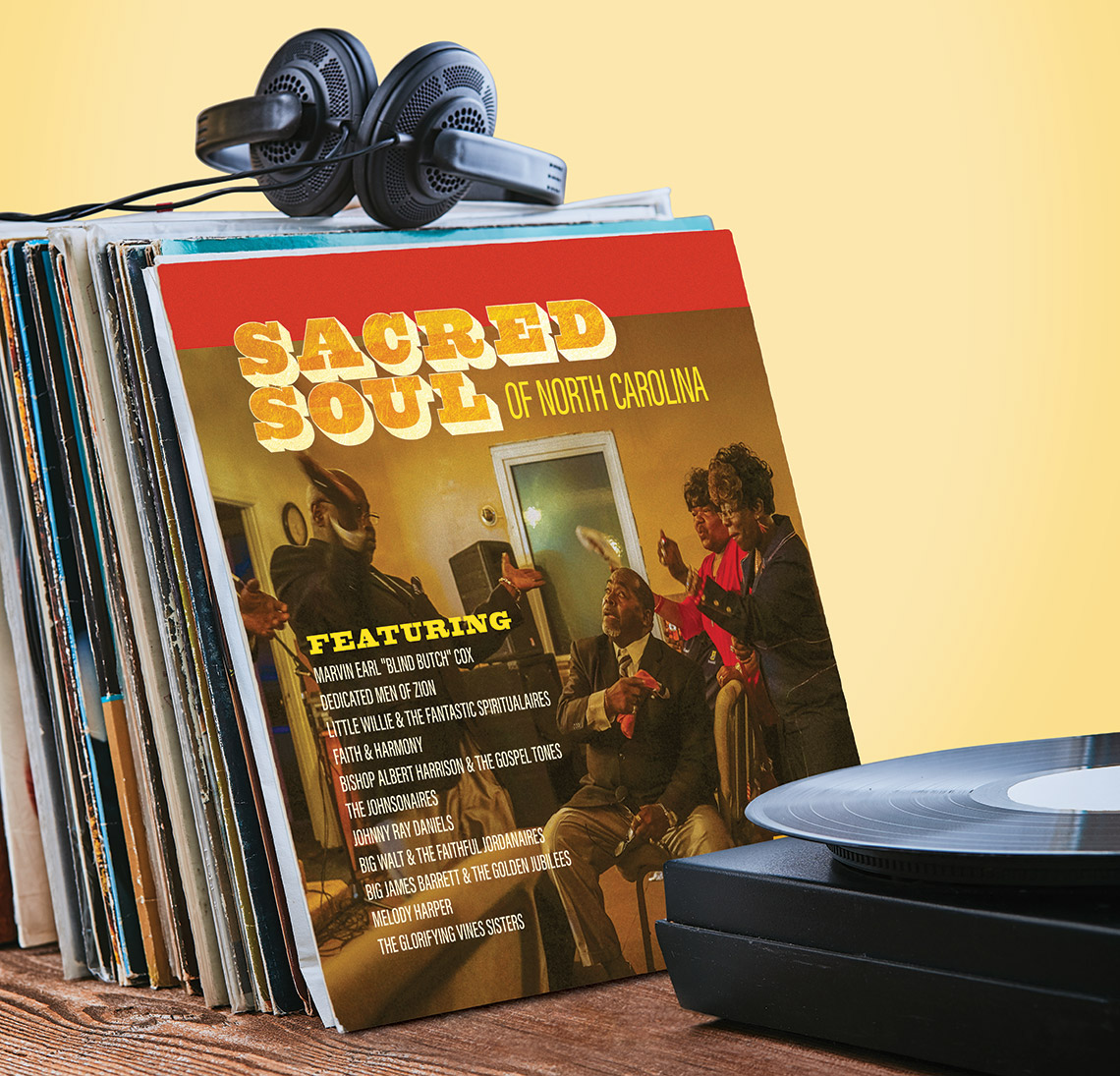 Jerome Johnson is on fire, shouting, stomping his feet, clasping a handkerchief in one hand and a microphone in the other. “Right now!” he calls out over a frenzied organ, pounding drums, and a walking bass line that bounces between his testifying and his brothers’ background vocal responses of “Come on!” Collectively known as The Johnsonaires, Jerome, Toney, James, and Calvin Johnson of Greenville are in the zone, hand-clapping their way to salvation during a spirit-shaker of a song caught live on video during the recording of a new CD compilation, Sacred Soul of North Carolina. In February 2020, The Johnsonaires and 10 other little-known gospel groups from the eastern part of the state gathered for eight days in a small storefront studio in downtown Fountain to record the album’s 18 rousing songs of joy and gratitude.

“Any foundation for any music … it’s rooted back to gospel,” Toney says in the Sacred Soul video documentary. In fact, gospel itself is rooted in music that goes much further back — to the sacred traditions of the Middle East and Africa, where certain sounds associated with spiritual transcendence were created, evolved, and, as part of the transatlantic slave trade, made their way to the Southeastern United States.

Across our state’s Coastal Plain, you’ll find some of the purest echoes of that forced cultural migration in American gospel music’s rhythmic repetition, call-and-response chants, and blue notes. Those are the elements that result in deeply emotional experiences. And those are the roof-raising sounds that these musicians — just a few among many — bring to tiny churches in rural areas throughout North Carolina and the South. — Mark Kemp

To purchase Sacred Soul of North Carolina, visit biglegalmessrecords.com. The album can also be streamed on Spotify, Apple Music, and YouTube Music.

An Our State Playlist: Black History in North Carolina 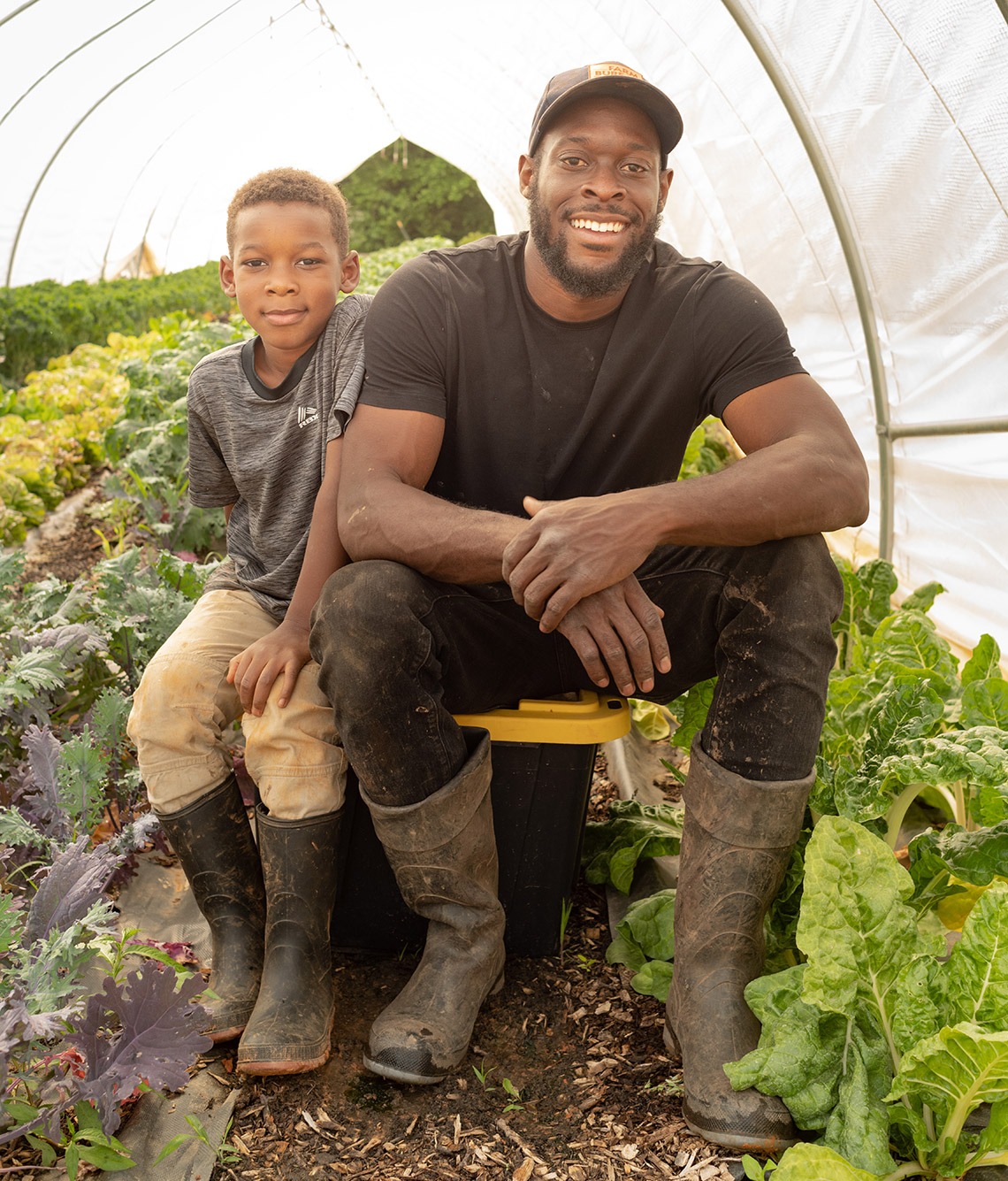 The Akan words san kofa, meaning “to go back and fetch,” are a reminder to Kamal Bell; his son, Khalil; and his students to use lessons from the past to solve problems in the present. photograph by THOMAS ROWELL 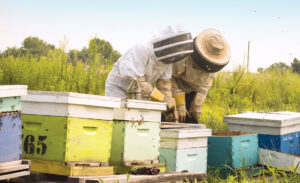 When Kamal Bell told his academic adviser at North Carolina Agricultural & Technical State University that he wanted to be a farmer, he was met with a warning that farming might not be a viable career. But Bell didn’t care; all he wanted to do was help people. After starting Sankofa Farms in Efland in 2016 to grow produce for people living in food deserts, he began an after-school and summer program called the Sankofa Farms Agricultural Academy for middle and high school students in Durham. Black Americans have historically been discriminated against when it comes to owning and running their own farms, so it was important to Bell that he provide a space for the next generation to gain skills like planting seeds, setting up irrigation systems, inspecting beehives, collecting data, and harvesting produce. For Bell, it doesn’t matter if his students go on to become farmers, but he hopes that they remain motivated to help their communities. Students who helped establish Sankofa’s roots five years ago have now gone off to work and college, but they still return to the Orange County farm to give back. — Caroline Farrell 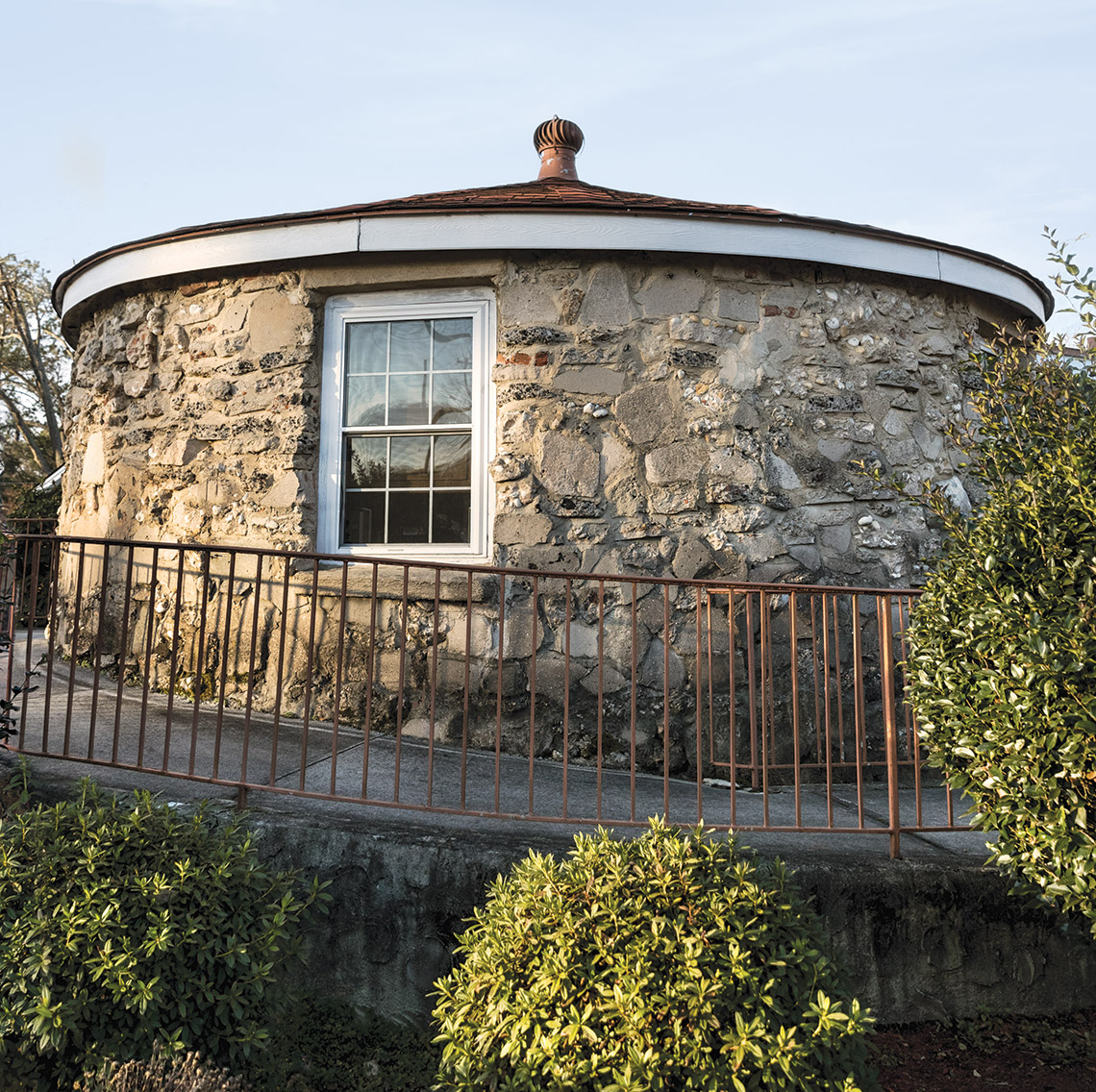 In addition to the Round House, Freeman’s textured stonework can be seen at Calvary Presbyterian Church and Our Redeemer Lutheran Church in Wilson. photograph by Charles Harris

Diminutive and hobbit-like, the Oliver Nestus Freeman Round House Museum in east Wilson belies the magnitude of the history harbored within its circular walls. An industrial arts graduate of what is now known as Tuskegee University, Freeman used his artist-masonry skills to construct houses and other buildings in his hometown during its formative years.

In 1946, he built the 800-square-foot “Round House” using all recycled materials — broken cement, scrap tin, pine poles, and 100 tons of stone. He used the house as a rental property because he was concerned about a lack of affordable housing for the African Americans who were flocking to town to work in the burgeoning tobacco industry or returning home from serving in World War II.

Today, the restored Round House is the city’s first African American museum. Displays of Freeman’s tools, photographs, letters, and other items highlight the ways in which his craftsmanship helped fellow Black residents succeed. — Deborah Griffin 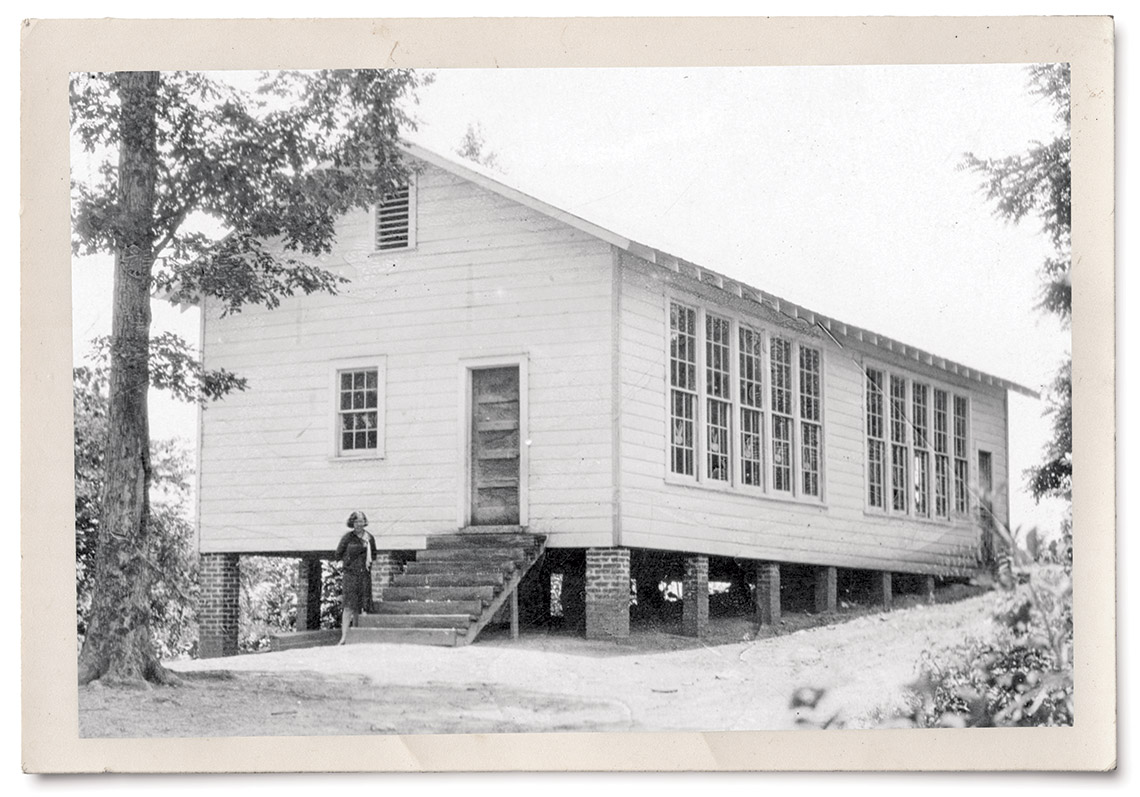 The Rosenwald School in Mars Hill is one of 500 remaining. Between 1917 and 1932, 5,000 of them were built in the United States. Photography courtesy of State Archives of North Carolina

Sitting inside the two-room schoolhouse in rural Madison County, Sarah Roland Weston Hart reminisces on the timeworn report card denoting her fifth-grade attendance at Mars Hill Anderson Rosenwald School in 1949. Today, the walls of the school are freshly painted in the same “nut brown” and off-white colors she remembers. That the building still exists is extraordinary. Inspired by a partnership between philanthropist Julius Rosenwald and educator Booker T. Washington, the school was established in 1928 as part of a larger effort to fund schools for Black children across the South. The building was nearly lost to time after desegregation in 1965 — that is, until a group of “friends” decided it was worth saving.

Recognizing the building’s historical significance, The Friends of the Mars Hill Rosenwald School formed and launched a rehabilitation effort in 2009, gathering support from community members, grant writers, preservationists, historians, university students, and alumni like Hart. The roof was replaced at a friendly price by the local high school football coach, who’d been grateful to have Rosenwald students join his team after desegregation. Over the next decade, funds came through for stabilizing the foundation, repairing walls and floors, and replacing the windows. In all, $245,000 in fundraising money and thousands of volunteer hours went into the effort.

Now on the National Register of Historic Places, the school will open as an interpretive museum and community cultural arts center in August, offering an immersive learning experience in Black history. — Melissa Reardon 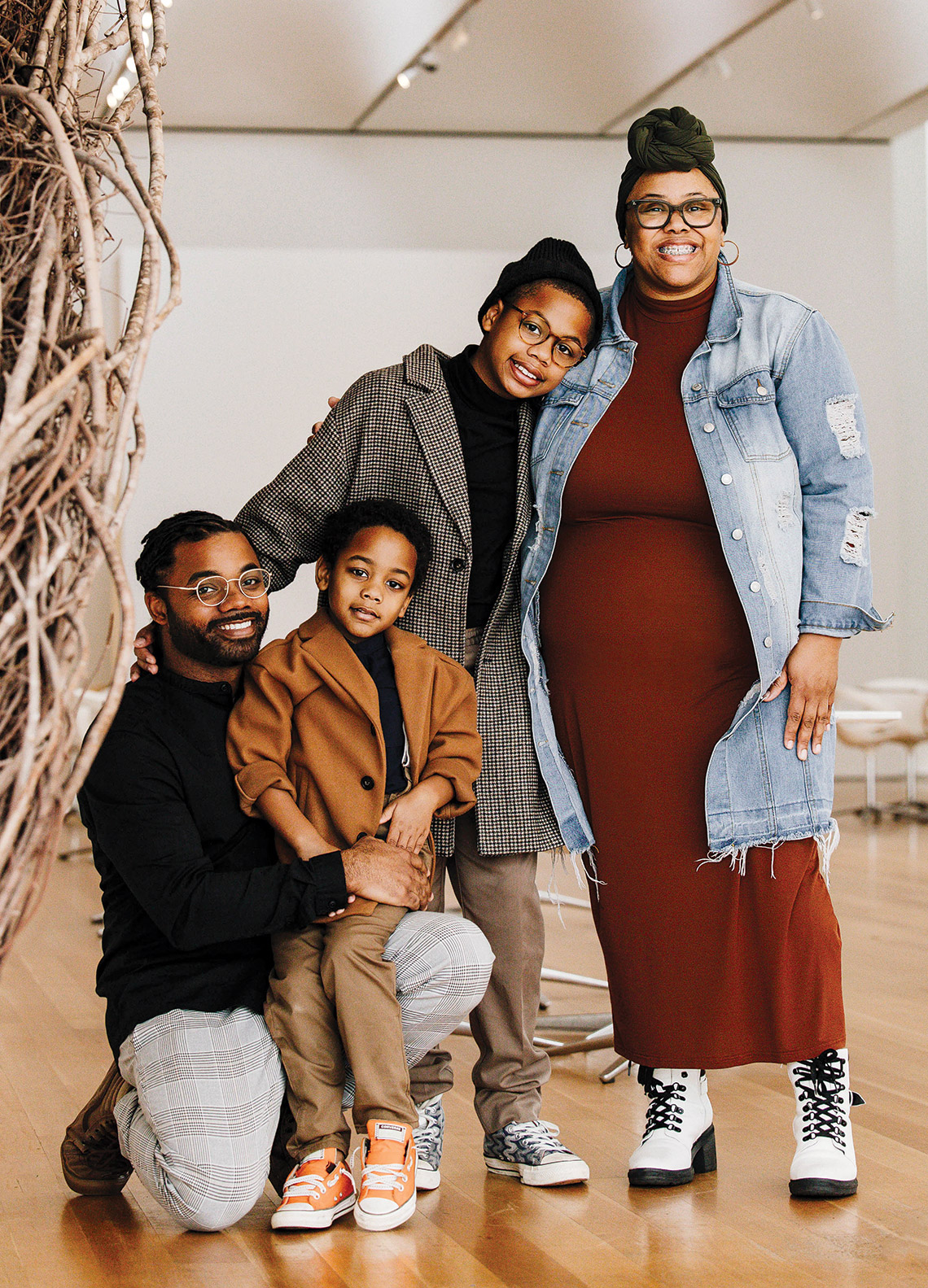 Each book on Liberation Station’s shelves is read, discussed, and approved by the Miller family — (from left) Duane, Emerson, Langston, and Victoria. photograph by Art by Court Winter

Once upon a time, there was an 8-year-old named Langston who dreamed of publishing his own book: a graphic novel about two Black brothers with a magic garden that gave them the power of invisibility to aid in their quest to fight crime. When Langston described the idea to his parents, Victoria Scott-Miller and Duane Miller, they decided to scope out a chain bookstore to do some market research. But after searching for three hours, the family had found only five children’s books with uplifting Black stories written or illustrated by Black people.

That trip was the inspiration for Liberation Station, an online and pop-up bookstore that focuses on positive Black narratives. “Seeing yourself in a book is kind of equivalent to having a passport,” Scott-Miller says. “It takes the limits off. You can literally sit in a library and go everywhere and go nowhere at all.”

A few of the books you can find at Liberation Station. photograph by NANCY PAULSEN BOOKS AND KOKILA, IMPRINTS OF PENGUIN YOUNG READERS

Currently a pop-up shop in the North Carolina Museum of Art, Liberation Station encourages children to see themselves as works of art. Scott-Miller wrote The Museum Lives in Me, a picture book about a class’s journey through the galleries; it will be released by NCMA in April. Meanwhile, Langston, now 11, still plans to make his adventure-filled comic book — with the Liberation Station stamp of approval. — Caroline Farrell