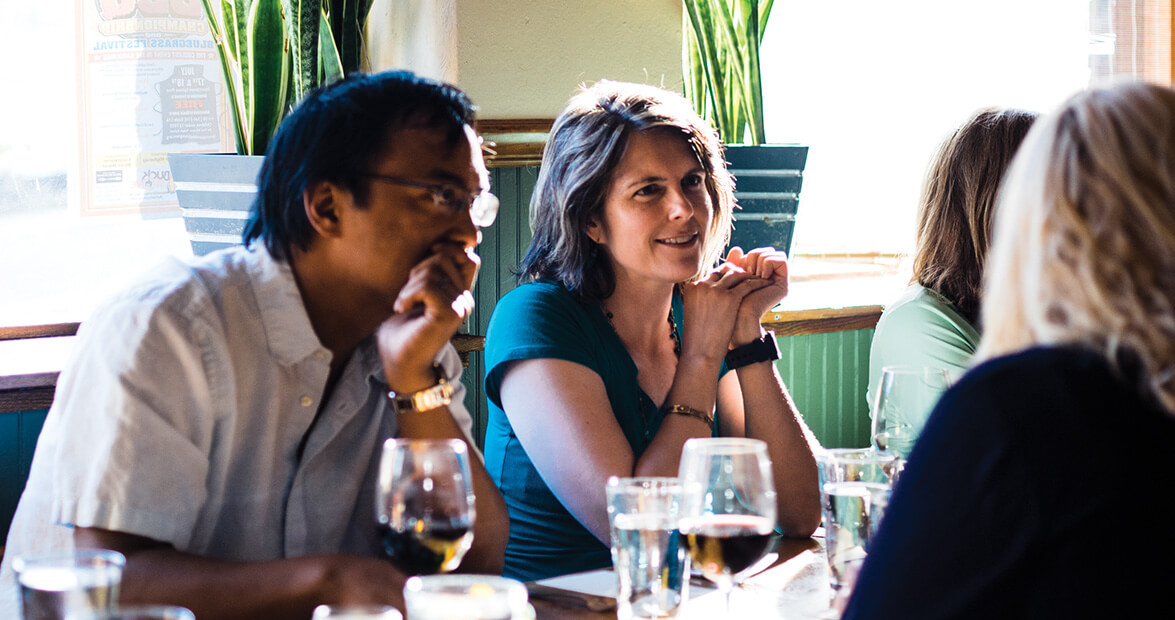 Nate Allen looks down at his garden. Dozens of guests below sip champagne and nibble on turnips dipped in pork fat and salt. A cook in a black T-shirt is hunched over a chapa, a metal griddle suspended over burning logs.

He turns over spring onions as the ashes float up, then fall to his shoulders like snowflakes. A waitress remarks that the juneberries atop a cured pork appetizer were picked a few feet away; the seeds themselves were planted by Nate and his toddler son. “It’s as local as you can get,” she says.

Nate throws his left leg up on the balcony, and calls to everyone below, “You all look beautiful down there.”

His fellow chefs are lined up on the railing. Nate introduces Mike Moore and his wife, Darlene, as “the absolute celebrity couple of Asheville’s pop-up dining scene.” Brian Canipelli is “knocking the socks off Asheville.” Matt Dawes is “just killin’ it.” Stuart Lyon is “my best friend and sous chef.” Chuck Kegg? “I absolutely love him.”

The garden below is hemmed in with wooden walls, umbrellas, brick walkways, and a well-worn street among well-worn buildings in downtown Spruce Pine. Inevitably, a CSX freight train rumbles by, blowing its horn. Nate, in a white-collared, short-sleeved shirt, and forearms with knife and fork tattoos, directs people into his restaurant — knife & fork — next door. “If you see somebody who looks like they’ve been cooking,” he says, “give them a hug.” 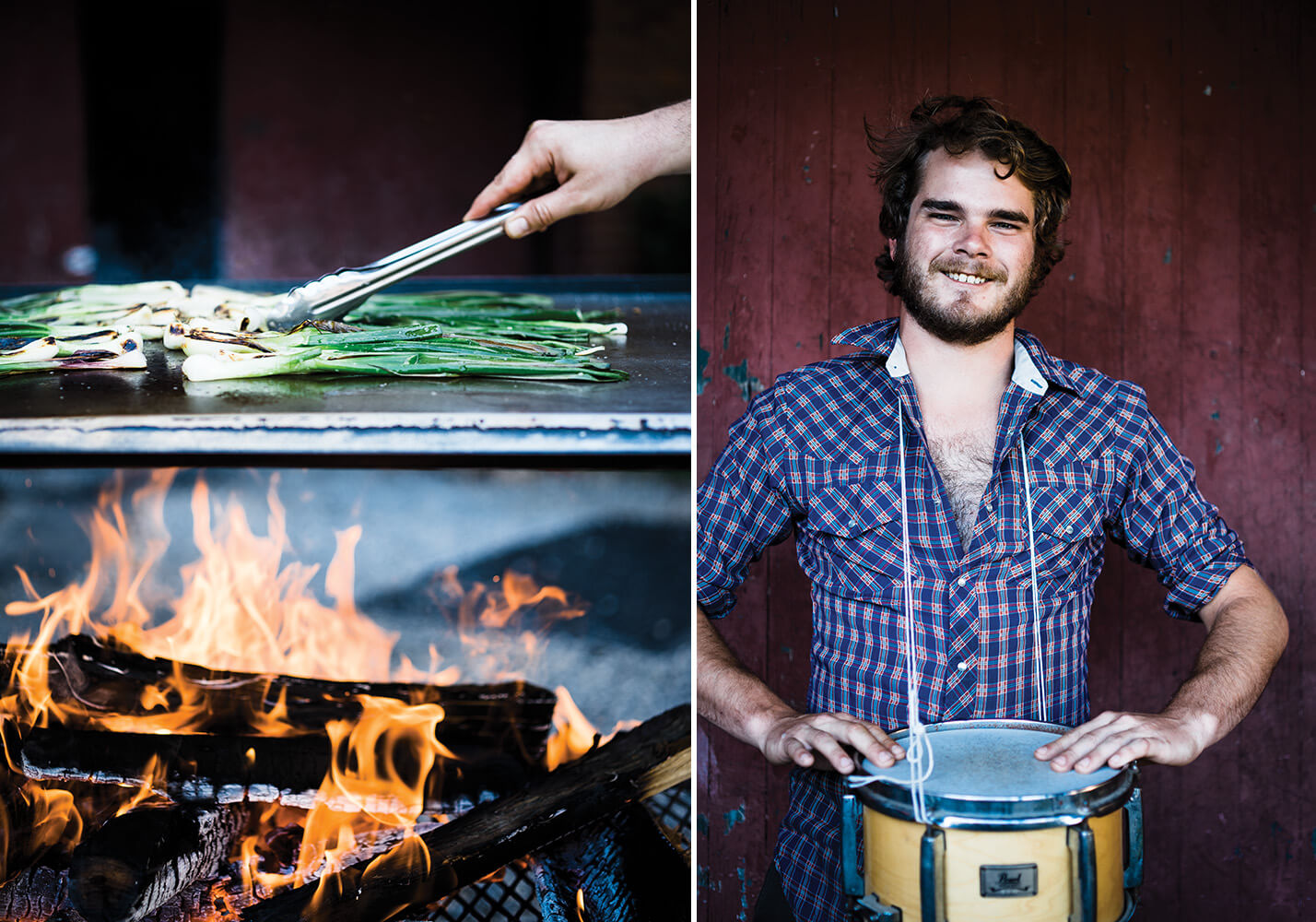 Every potential hugger is here for the Blind Pig Supper Club, which moves around from place to place, and which has been gathering since the summer of 2011. Mike, then unemployed, rounded up some fellow chefs in Asheville. Let’s do a one-time thing, he said. Forage for ingredients. Find the rest locally. Cook them up on a farm east of town, and only tell a few people about it.

The one-time thing became a monthly thing. The protocol is always the same: A theme is announced online. Japanese. Pink Floyd. A few dozen tickets go on sale. They sell out. Quickly. A major portion of the dinner proceeds goes to charity. The venue — restaurant, farmhouse, warehouse, church — isn’t announced until two days before the meal takes place. Usually it’s in Asheville, but the supper club has gone on the road to Durham, Cherokee, and Beaufort. The menu is revealed at the table. The ingredients are local. If the cooks aren’t already friends, they will be. They tinker. They collaborate. And the diners? They trust.

“We can be as creative as we want,” Mike says, “because the ticket’s sold.”

“The food should be very playful,” says Sam Sumner, sitting next to his girlfriend, Allegra Grant, who works at two restaurants in Asheville. Sam, a manager at the dining room at the Inn on Biltmore Estate, used to work here, where, he says, “they have a really good forager.”

The first dish comes out, along with Stuart Lyon, who helped prepare it. It’s burdock and dandelion, wrapped around a fatty cut of brisket called deckle, topped with pickle gelée and mustard. “Enhanced mustard,” Stuart emphasizes to the room.

“It’s everything you want in a charcuterie dish, in one bite,” Sam says, marveling at its salty, fatty, bitter, and sweet combination.

The plates are whisked away, and the process repeats itself a few minutes later. Matt Dawes introduces his crisp peas en salade dish of crisp sugar snaps, goat cheese and curd, pea grains, tendrils, and flowers. Matt’s restaurant is “a temple to meat,” he says. “So I’ve decided to step out of that.”

Sometimes there are five courses. Sometimes 13. Tonight, there are eight. Every course has a story. Every story adds flavor. Brian baked his potatoes under a blue pile of salt that’s supposed to resemble a mound of dirt. Mike calls his Buncombe County-raised, chapa-seared lamb tenders “a tremendous, beautiful piece of protein.” Chuck’s rabbit Bolognese-filled agnolotti is “love all up in your mouth,” he says. 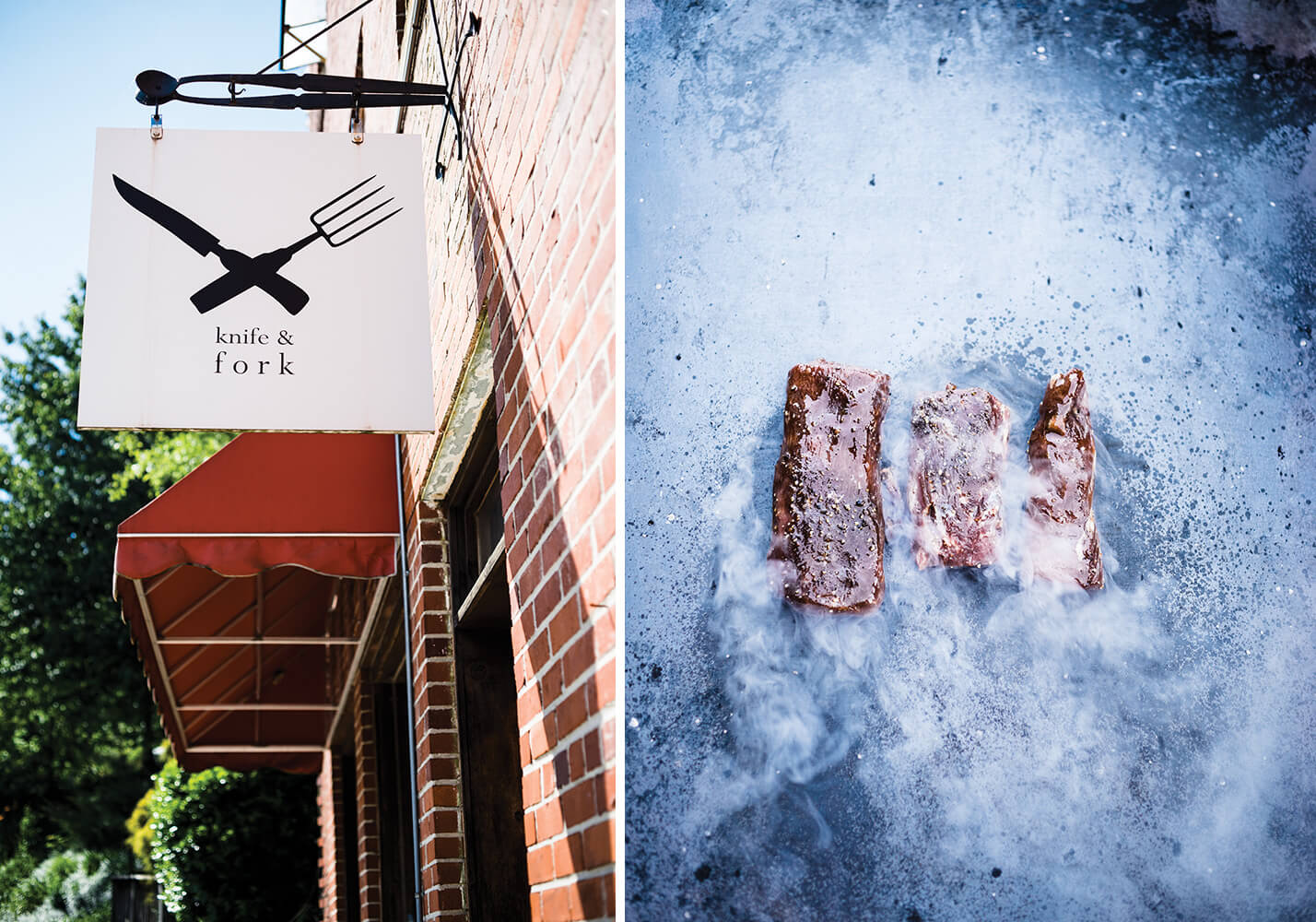 The kitchen is small, meant for four people, although a dozen crowd in tonight. The smoked trout dish is up next, and white plates are lined on every available flat surface. The chefs work assembly-line-style. Matt distributes the fish, plate by plate. If you feel a bone, leave it in, Nate tells him. “Trout have bones.”

Every ingredient is a character. Among the chaos, Chuck stops for moment to admire a little round succulent leaf called stonecrop. “It holds up to heat,” he says. “It’s incredible.”

Nate grabs a tray of Asian squash and hurries out the back door to grill it. Chuck grabs another ingredient: pokeweed. “You know it because you used to whack it as a kid,” he says. It snaps loudly. You have to prepare the right piece, which has to be picked at precisely the right time, long before the berries come out. If not? “It’s deadly,” Chuck says.

Nate returns, tells his assembly-line chefs to top each dish with a piece of squash, then strides into the dining room. “Are we having fun?” he asks of his guests.

In the back, Chuck pulls a too-black piece of squash from a plate. “This is unacceptable,” he says.

“I built the most searing fire. I have no eyebrows now,” Nate tells a laughing crowd.

Every course has a story. Every story adds flavor. Brian baked his potatoes under a crusted pile of salt that’s supposed to resemble a mound of dirt.

“Wipe that plate,” Chuck tells a chef who dribbled some green puree on a pristine area of ceramic.

Servers pluck up the loaded dishes in the kitchen as Nate calls attention to the wild Indian cucumber root. “That is the honeypot of this plate,” he says. People look down, focusing on the tiny white cone among the pokeweed, trout, and stonecrop. It’s the hero of the course.

Back in the kitchen, the flat spots are bare. For a few minutes.

There’s a band, Dr. Bacon, that covers The Rolling Stones’ “Dead Flowers” between courses. They need to fill time. There’s just one dishwasher for 65 people, and he’s getting overwhelmed.

One of the band members is dressed like a strip of bacon. He’s a hog farmer. Other farmers are here, too, helping to prepare the plants they grew or the animals they raised. Take, for example, Brian’s salt-baked potato. “You see that right there?” Mike asks a farmer named Evan. “That’s the best a potato can ever taste.”

The wine, perfectly paired and refilled with each course, makes the laughter louder as the sun starts to set. The mountains cast longer shadows. The ingredients are running out. Nate emerges from behind a green curtain that separates the kitchen from the dining room, a bottle of beer in his hand, his white shirt now stained. Before dessert, he delivers one last sermon from the gospel of local and fresh.

“Everybody has everything all of the time,” he starts. “Gotta have tomato on your burger in January, gotta have asparagus in November that’s coming from Peru, gotta have bell peppers from Israel.”

Nate’s voice builds to a crescendo. “This is an amazing color. This is my elegy to a strawberry.”

He points out which berries were pickled and which ones were grilled over wild cherrywood. The yogurt is made in-house and rolled into “sweet, sweet” biscuits he uses for shortcake.

Afterward, Nate stands out back in his garden. He says he’s on top of the world, but he looks a little spent. “I need a lot of love,” he says. “Doing what I do is expelling love all the time. I’m a giver.”

Night has fallen. The logs have burned to ash. A train whistle blows in the distance. The guests stream out of knife & fork and start walking up the hill to the bar, spoon. One of them sees Nate and gives him the last ingredient he needs: a hug.